“There, there!” he kept shouting, “go straight, go straight!”

I kicked on through the murky water, peering through my goggles into the plankton-deepened gloom before me but seeing nothing.

“Where, where?” I yelled to the spotter on the boat, surfacing and looking back to shout, “I can’t see it!”

“Now, now, swim!” he cried, pointing, and I turned and popped my head back under just in time to see the gloom coalescing into an absolutely enormous dark shape coming right at me…

“Fuuuuuuuck,” I remember hearing myself shout through my snorkel, scrambling to get out of this leviathan’s way before it bulldozed me.

I then marvelled, breathless, at its beautiful spotted flank and fins as it passed, eyes boggling at the insane size of the thing. This was a full-grown adult male, some 12 metres in length, and due to the visibility only being a few metres that day I couldn’t see the whole shark at the same time. First the enormous mouth and eyes came past, then that view of his flank and fins, and finally the tail fin (itself double my height) pushed past with enough force to actually shunt me to the side.

(I just wish I’d managed to get better pictures – the 3 on this page are the only remotely decent ones from the whole film!)

Snorkelling with whale sharks was hands down the highlight, followed by the excellent diving, of my (not always entirely enjoyable) month travelling solo around the Philippines. The word awesome is as overused as any in the dictionary, but swimming alongside those gentle giants, being so completely dwarfed by another living creature, really is an awesome, awe-inspiring experience.

I did so in Donsol, which at the time was the only place in the Philippines you could reliably do it – and only from March to May, when the whale sharks’ natural migratory patterns bring them to Donsol’s plankton-rich waters to feed.

Since becoming famed for the chance to swim with whale sharks (or butanding as they’re known locally), sleepy little Donsol has reinvented itself as an eco-tourism hub. The activity isn’t only a way for visitors to check an item off the bucket list and for locals to make some money – it’s also a very well run conservation project, with the welfare of the sharks given utmost importance. Before going out on your boat tour, you’re given a briefing and watch a video explaining all the rules governing your interaction with the sharks e.g. they have a 1-boat 1-shark policy, meaning that if there are 6 boats out there, once a boat finds a shark the other 5 boats have to hang back and wait their turn before their own passengers get to jump in (this rule isn’t 100% followed to be honest, but the others are). We were the first group out on the water that day, having registered the previous evening and then getting there nice & early in the morning which meant we were placed with the most experienced crew and were the first boat out – it paid off, as we were first to the majority of sharks encountered that morning (it was a bumper morning too, with half a dozen sharks spotted). If you stay walking-distance from the centre it makes it easy to stroll over in the evening and get the registration done (see below for accommodation).

More importantly, though, the very existence of the snorkelling project helps protect the sharks from being fished. Sharks worldwide are under pressure from the finning trade, their fins prized as the key ingredient for shark fin soup – a popular delicacy at Chinese banquets, wedding receptions in particular. The practice involves removing a shark’s fins before throwing it back in the sea to die – the fins are by far the most valuable parts, and a fishing boat can carry a shitload more fins by discarding the rest of the carcasses at sea.

Of course it makes sense to the boat owners to do this, in terms of maximizing their profits; but what a cruel death, and what a deplorable waste. The sheer size of whale sharks and their fins make them a prime target, of course, and the rest of their huge bodies are dropped to the bottom. Brutal.

While there is increasing awareness of conservation in China and a growing movement to ban finning spearheaded by WildAid, China’s huge population and new-found wealth means demand for fins will continue for years to come; furthermore, it’s also a common menu item at Chinese restaurants in various other countries such as Thailand and Malaysia. The whale shark is now listed as endangered, with global numbers estimated to have halved in the last 75 years.

So sharks need all the help they can get, and if fishermen can be persuaded it makes more sense profit-wise to conserve them than it does to dismember them, it makes a real difference. By going snorkelling in Donsol, you’re helping to do that. 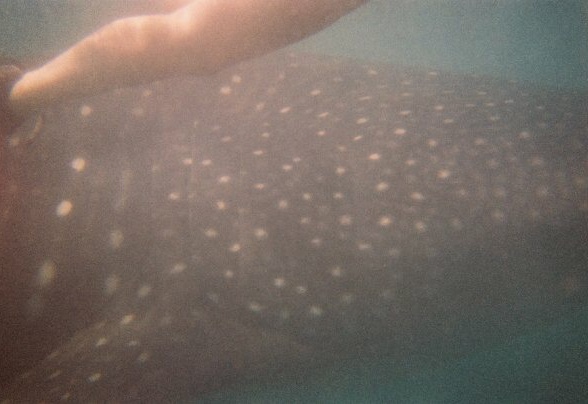 As mentioned above, when I went to the Philippines the only place to snorkel with whale sharks was Donsol (unless you happened to get very lucky elsewhere); but in recent years another town started offering a rival whale shark experience. This town is Oslob, and its location on Cebu Island makes it easier to get to than Donsol (relative to most visitor itineraries); it also offers whale shark snorkelling year-round, rather than for a limited season. However, this is achieved by actively feeding the sharks to attract them to and keep them in the area. This both disturbs their natural migratory patterns, and causes them to see human boats as sources of food – which could lead to them approaching fishing boats. Furthermore, the sharks around Oslob have sustained boat propeller injuries due to the lack of consideration for their well being. In other words, whereas Donsol runs a proper conservation scheme, Oslob really is just locals cashing in on bucketlist backpackers without a care for the sharks themselves. While this is still clearly better than killing them for their fins, if you actually give a shit about the sharks I reckon you should support the good work being done at Donsol instead, even though it may mean going way out of your way. I wouldn’t want the people of Oslob to lose their living standards or start fishing the whale sharks, but hopefully if enough people vote with their feet Oslob will eventually adopt the better practices followed at Donsol.

If you really can’t get to Donsol, or you’re there in the wrong season, you’ll have to make the call on Oslob. Personally I wouldn’t go – in fact I intentionally timed my visit to the Philippines to be there in the right season for Donsol, and that’s what I implore you to do if you can (or alternatively, if you’re heading on to Australia aim to do it at Ningaloo Reef in Exmouth, Western Australia, where the season is longer and runs from March to August)

Where to Stay in Donsol

The whale shark snorkelling centre is a little out of town (to the north), and there’s a string of accommodation options along the stretch of coast there. These are more expensive than the places in the town itself, but are nicer and mean you’re just a short walk from the centre – and as noted above, the earlier you get there and register in the morning, the better the crew you get and the better your chances of more quality shark interactions (if you’re on a tighter budget, you can reduce expenses by staying in town and taking a tuk tuk to the centre – make sure to get there early though). We stayed at Amor Farm Beach Resort which was a 5-minute walk from the centre, run by a friendly family, and nothing special accommodation-wise but a nice enough place to hang out over food & beers in the evenings. For other options in Donsol see here

How to Get to Donsol

Donsol’s a 90-minute minivan ride from Legazpi city, which is a 1-hour flight or a gruelling 14-hour bus ride from Manila (search & book transportation options here), or a 1-hour flight from Cebu City. I took an early bus from Manila and stayed overnight in Legazpi, then continued to Donsol in the morning with a British couple I met at the hotel, and we signed up for whale shark snorkelling the following morning.

(Oslob is on the island of Cebu, around 3 hours south of Cebu city)

Have you been snorkelling with whale sharks in Donsol (or Oslob)? How was it? Any questions? Give me a shout below and I’ll get back to you.

(This page contains affiliate links i.e. if you follow the links from this page and make a purchase, 4corners7seas will receive a commission from them. This commission comes out of their profit margin at no extra cost to you. I’m recommending these products and services from personal experience, and thank you in advance should you choose to purchase them via the above links)