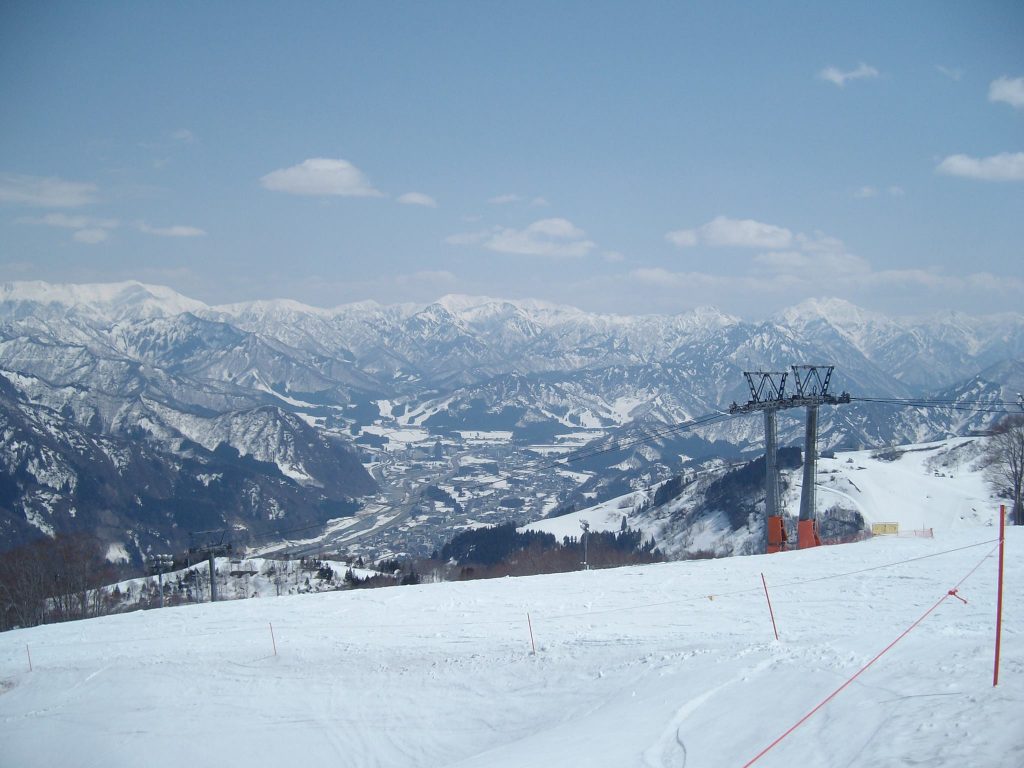 “The train emerged from the long tunnel, into the snow country.”
– the opening line of Yasunari Kawabata’s Snow Country

Granted, Kawabata’s protagonist Shimamura wasn’t riding the Joetsu Shinkansen as I was on my frequent visits to Yuzawa’s Snow Country in Niigata (the Shinkansen didn’t exist when the novel was written in 1935, and in fact uses a different tunnel), and unlike Shimamura I wasn’t going there to continue a doomed love affair with a geisha but rather to continue my love affair with snowboarding; but all the same, when you travel from Tokyo to Niigata by train you do indeed emerge from a (sequence of) very long tunnel(s) into a gleaming white world, almost as though you’ve gone through the back of the wardrobe and come out in Narnia.

It was a much longer journey in 1935, but these days the bullet train whisks you in under 90 minutes from the grey concrete of the metropolis up to the Snow Country; it takes you through the semi-rural northern Kanto plain, plunges under the mountains, and then suddenly you’re emerging in this dreamscape wonderland where everything is buried under enormous quantities of fresh snow. It’s pretty amazing, and while the riding available in Niigata isn’t the best in Japan (see Hokkaido for that), a trip up to the Yuzawa snow country is worthwhile whether you’re riding or simply sightseeing.

(For snowboarders and skiers, here’s my review of the three Yuzawa ski areas I’m familiar with – there are many more I never visited) 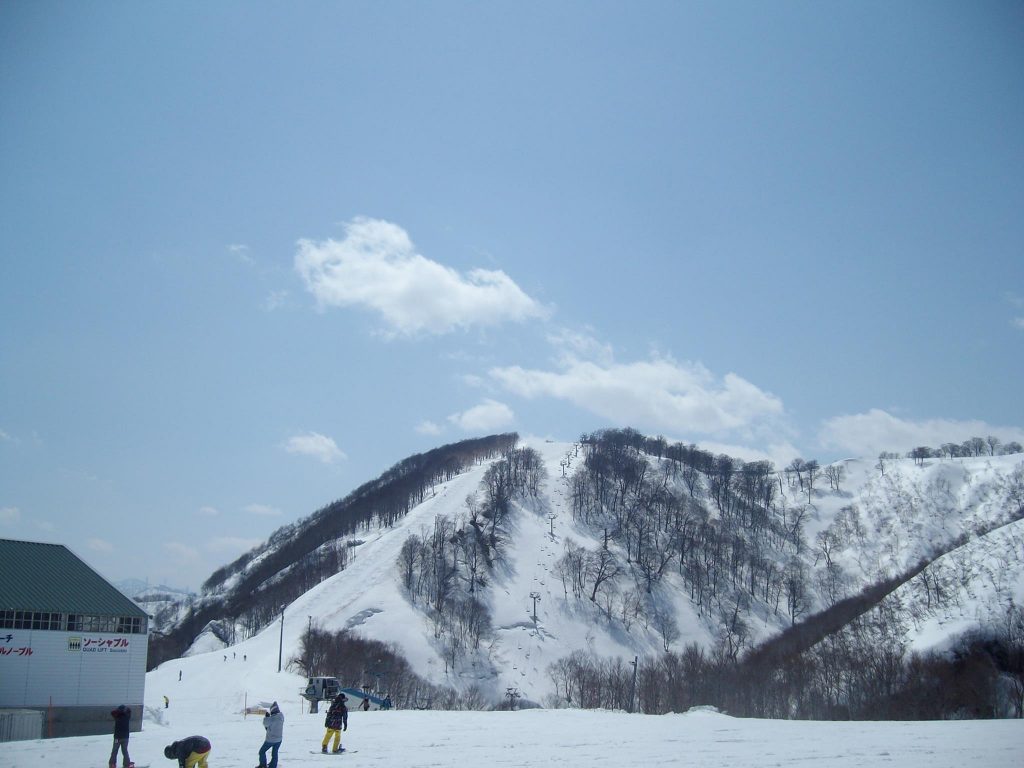 Things to do in Yuzawa for non-skiers

If you’re just going to Yuzawa to visit the mountains and see the snow, there’s plenty to do around town including a sake museum (located in Echigo Yuzawa station) and a ‘Snow Country’ museum dedicated to the famous novel and its author, and the ryokan where Kawabata stayed is still open and apparently still an excellent place to stay and soak in the hot springs (with Kawabata’s room preserved for viewing just as it was in 1935). For around 1,300 yen you can also go up the Gala Yuzawa ski area’s main gondola for some lunch and to see the views of the valley and surrounding mountains.

Yuzawa is easily reached by Joetsu Shinkansen from Tokyo station. Two services run on the line; the Toki trains make fewer stops and you need to disembark at Echigo Yuzawa station, while the Tanigawa trains take slightly longer (making more stops) and terminate at Echigo Yuzawa in summer or carry on to Gala Yuzawa station in winter (directly at the base of the Gala Yuzawa gondola). If you don’t have a JR Pass, you can buy a JR Tokyo Wide Pass which covers the whole Kanto area and extends as far as Yuzawa – this costs 10,000 yen for three consecutive days of unlimited travel on (most) JR trains in Kanto and is available to all foreign passport holders (even if resident in Japan, unlike the other JR passes).

Another option instead of zooming up to Niigata on the Shinkansen is to take the old Joetsu main line, which despite having been made rather obsolete still provides service to the local communities along its route between Gunma and Yuzawa. This was the line that Kawabata rode, and while the bullet train simply bypasses the mountains through a series of tunnels, the old Joetsu line mostly winds its way along valley floors, with a very long tunnel under Mt Tanigawa on the prefectural border, the Shimizu tunnel, Kawabata’s 国境の長いトンネル, or ‘long tunnel under the border’.

After a solo snowboarding trip to Yuzawa when my day was cut short after I bashed myself on a jump (and so I was heading home in daylight for once), I decided to ride this famous old train line just to see the scenery and the lay of the land. It’s an interesting way to see a side of Japan that you can easily miss – these tiny rural communities which have largely gone forgotten in recent decades, with shrinking and ageing populations and vanishing economies. It’s grimly fascinating to see the semi-deserted villages and fully-abandoned old ski areas along the railway line, disused chairlifts standing like sentinels in the snow, a stark foreshadowing of Japan’s looming demographic problems. But despite that rather gloomy aspect, it really is a pretty train ride with views of snow-blanketed valleys and mountains on the Niigata side, and running alongside a bamboo-lined river on the Gunma side. If you have a couple of hours to fill and feel like travelling at a slightly slower pace and taking in a bit of scenery, this is a good alternative to the bullet train when heading up to (or back from) the Yuzawa Snow Country.

There’s also the opportunity to get off at Doai station, Japan’s deepest and creepiest train station, and check out this unmanned station’s epic flight of stairs down into the bowels of the mountain – an opportunity I unfortunately missed, as at the time I didn’t know about it!

Using a JR Pass or Tokyo Wide Pass, catch a morning Tanigawa (or MAX Tanigawa) train from Tokyo station to Gala Yuzawa station. Exiting the train station brings you directly to the ski resort base station (in the same building), and you can buy a round trip ticket for the gondola (you can also rent a sled for 500 yen if you want to play in the snow, with rental snow boots and gloves also available).

At the top gondola station there’s a large restaurant building with great views of the Yuzawa valley where you can grab some lunch, and you can find a sledding area outside.

Once you’re done there, ride the gondola back down to the base station and head to Echigo Yuzawa station (you can either ride the train one stop with your pass or jump on a free shuttle bus, just check the schedules and take whichever is leaving first – the bus stop is in front of the building, take the elevator down to the lowest level or just ask the staff if you’re not sure where to go!)

At Echigo Yuzawa station visit the Ponshukan (sake museum) to sample the famous Niigata sake, and then ride the old original Joetsu line (not the Joetsu Shinkansen!) from Echigo Yuzawa to Takasaki (with a change at Minakami) to experience the original Snow Country railway. If you get off at Doai to check out the crazy underground stairs & platform, it’ll be at least one hour before the next train comes through – but the stairs alone apparently take ten minutes, so an hour seems about right to descend, check it out and snap some pics, and climb back out (the underground platform is for northbound trains i.e. trains heading to Yuzawa; the above-ground platform is for trains going south to Minakami). Note that if you’re using a JR Tokyo Wide Pass, the 40-minute ride from Yuzawa to Minakami isn’t covered so you’ll have to buy a one-way ticket (670 yen at time of writing); with a full JR Pass, it’s all completely covered. At Takasaki station you can then board any of the frequent bullet trains back to Tokyo (50 to 60 minutes).

(Hyperdia is a super-useful website you can use to check the train schedules; there’s a good guide to using Hyperdia here)

(This page contains affiliate links i.e. if you follow the links from this page to Japan Rail Pass or Amazon and make a purchase, 4corners7seas will receive a commission from them. This commission comes out of their profit margin at no extra cost to you; thank you in advance should you choose to do so!)