Vang Vieng is small town in an achingly beautiful part of Laos, situated on the Nam Song river and facing some of the most stunning karst scenery to be found anywhere. The incredible natural setting makes it a tourist draw, and it’s the sort of place that seems perfectly made for eco- and adventure tourism, with a range of activities available close at hand such as rock climbing, exploring the surroundings by bike, visiting the nearby caves, and kayaking on the river. 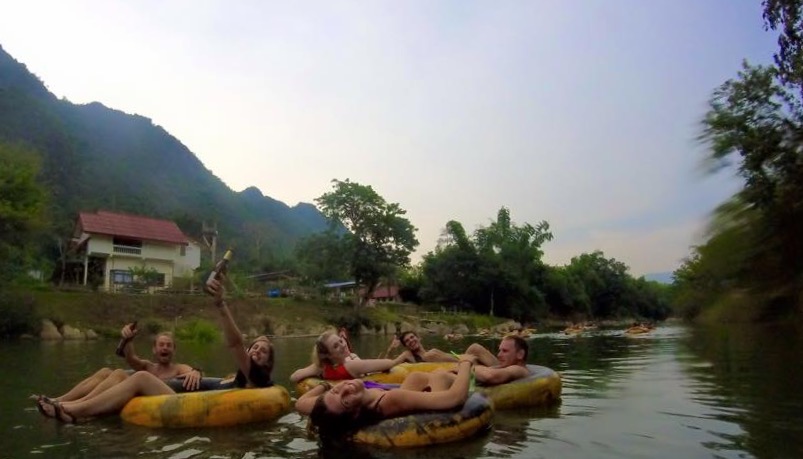 However it was another activity on the river that brought this once-sleepy town such notoriety on the Banana Pancake Trail, as the unlikeliest of party destinations – the local must-do of river tubing. For over a decade Vang Vieng was synonymous with tubing, and Vang Vieng tubing was synonymous with getting totally fucked up and diving head first into the river from the many jumping platforms and rope swings at the bars along the banks, with high risk of death or injury. Backpackers wore their ‘Tubing in the Vang Vieng’ souvenir singlets all over Southeast Asia, and some spent weeks on end in Vang Vieng tubing and partying every day, with the odd day off to recover and mong out in one of the town’s many god-awful ‘Friends bars’ (these are cookie-cutter restaurant bars with identical banana pancake trail menus and cosy cushions where hungover tubers lie around all day watching Friends DVDs. Why they all play Friends, all day long – how that even started in the first place – I have no idea, but it’s lame in the extreme)

Much has been written about this – about how the drunken backpackers were trashing the local culture (and how the locals were entirely complicit in this in their pursuit of and eventual dependence on the related profits), and about the absurd numbers of young tourists winding up dead and severely injured due to the obviously dangerous mix of alcohol, a fast-flowing river with ‘death slides’ and rope swings, and the total lack of health & safety oversight.

The numbers are pretty staggering – e.g. 27 tourist deaths recorded in 2011 – but rather than going into that in any great detail (as has been thoroughly done in the above links), I just want to describe my own two very different visits to Vang Vieng and discuss the town’s controversial recent past and hopefully brighter future.

My first visit was in 2008 (a few days before this crazy journey from Laos to Vietnam), when the tubing was very much in its prime. While I have to say I found the whole thing pretty ridiculous, and limited myself to only doing it once, I also have to admit I thoroughly enjoyed it – I got fair hammered, floated down the river with some English lads I’d met on a bus a few days earlier in Thailand (plus all the other randoms who were out on the river that day), and as the alcohol-induced bravado kicked in I got more and more enthusiastically into jumping off the rope swings. Of course, more alcohol means more bravado but it also means more motor impairment… at one of the last swings on the river, from a platform a good 20 feet above the water, I declared my intention to execute a double backflip and land neatly in my passing tube, which my mate cast out from the bank for me.

Predictably enough, what I actually executed was a totally uncontrolled 20-foot windmill faceplant from the platform directly into the river below, having failed to even grip the handle of the rope swing, my watching mates looking on concerned and standing ready to do a spot of life saving / body recovery.

Thankfully I didn’t stove my skull in on any hidden rocks below the surface or fill my lungs with a fatal amount of water, and surfaced, laughing, to the relief of myself and those watching. I had received a good hard smack from the river’s surface though, and for the rest of the day was punch-drunk (as well as drunk drunk), completely forgetting the existence of people I’d been having full-fledged conversations with just a short time earlier.

My mates reckoned I had a slight concussion, and I reckon they were probably right. Fact is, I got lucky and got away with it; perhaps a couple of inches to one side or the other and it’d have been curtains. Or perhaps I’d have ended up like the guy I saw a couple of mornings later as I ate my breakfast before catching the bus to Phonsavan, absolutely screaming in agony as he was being stretchered into an ambulance. Apparently he’d spent the night like that with a compound fracture of the leg, waiting for the ambulance to get there and take him back to hospital down in Vientiane (some four hours away).

So yeah, I got lucky. Many got unlucky. Backpackers were flocking to Vang Vieng to get wrecked – some people were actually flying to Asia specifically to get wasted in Vang Vieng – and some of them were dying. The locals came to see the river as cursed and haunted by the souls of all those dead tourist kids it took, the town was an eyesore of shitty concrete hotel developments and Friends bars, and something surely had to give.

…and give it did. On my second visit to Vang Vieng in 2012, en route overland from China to Thailand, change was in the air. The government had recently launched a crackdown on the tubing, closing most of the river bars and having the death slides and rope swings removed. They’d also introduced a strict closing time for the bars in town, and the party was well and truly pooped. Tubing was still happening, but now it was actually just floating down the river in a tube and enjoying the scenery, rather than an excuse for debauchery.

Backpackers were still getting pissed up at the bars in town and on the town’s little river island, but come official closing time the music was cut off and any further alcohol sales were done under the counter and on the sly.

The disappointment in the air was tangible, especially when talking to the huge group of Irish lads who, unaware of the crackdown, had flown to Laos to get wasted! They were making the most of it anyway, but were looking forward to getting down to Bangkok. And, for sure, I had less fun on that second visit to Vang Vieng, but I still saw it as a positive change; bright young fools would no longer be stretchered away and the town would no longer have to deal with the oafish and disrespectful behaviour that often went on, and the stunning surroundings could hopefully claim centre stage once again.

On the other hand, many of the locals were worried about their livelihoods – especially of course those involved in the alcohol trade, but falling visitor numbers would also be bad for every other business in town.

Well, perhaps except for the rock climbing and kayaking companies – the people visiting Vang Vieng for those activities would still come, and perhaps they’d pick up extra business from the backpackers who would otherwise have been too wasted for adventure activities. And it seemed to me that therein lay the hope for a more functional and sustainable future for Vang Vieng, with (hopefully well-managed) adventure activities and the gorgeous scenery calling visitors, rather than drunken carnage. I thought the partying would probably still continue, but in a more sensible form, and that if the Friends bars were to disappear (i.e. evolve into something less shite) that’d be a major improvement.

And as it turned out, the locals need not have worried about falling visitor numbers – whatever happened with Banana Pancake Trail backpackers, the Chinese would soon be coming.

In 2012 there was little evidence of their influence as far south as Vang Vieng, but further north in Luang Nam Tha province there was already plenty, the influx of Chinese business interests and tourists another double-edged sword for Laos to deal with (and a far bigger one at that).

Apparently Vang Vieng is also now experiencing a boom in Korean tourists, thanks to a Korean reality TV show that was recently filmed there.

Though I was in Laos & Thailand again in 2015/16, I haven’t been back to Vang Vieng since 2012; but from talking to others who were there in 2016, I gather that the town has indeed become more of an eco- and adventure tourism spot, the tubing is now much less ridiculous but with a bar or two back on the river again (but no death slides!) it’s still a draw for those looking to party, and the influx of moneyed Chinese and Korean tourists has led to increased demand for higher end accommodations and restaurants (with many of the Friends bars being accordingly repurposed – and good riddance). This all sounds like change for the better, though with the increased demand for beds and for higher end hotels, the town is never going to recapture its former sleepy nature. That is surely gone forever, but the locals have found relative wealth in its place; Vang Vieng is really like a case study of the social and environmental pitfalls of uncontrolled tourist booms in developing countries, but even if backpackers had never found it the Chinese would still eventually have done so, bringing both positive developments and problems. The signs are mixed, but let’s hope things find the right balance as this beautiful country develops and this beautiful place feels its way forwards.