We were two weeks into our epic road trip around the US, now driving through the incredible southwestern states of New Mexico and Arizona; we’d just spent two days in Albuquerque for the July 4 Independence Day celebrations (and also one of my companion’s birthdays), and the next point of call was the Grand Canyon.

The Grand Canyon’s North Rim is known for having more spectacular views than the more oft-visited South Rim, and as we intended to continue north from the Grand Canyon to visit a couple of Utah’s stunning national parks (namely, Zion & Bryce Canyon) it made sense for us to visit the North Rim (the South Rim is the more-visited due to its closer proximity to Las Vegas, the starting point for many Grand Canyon visits).

The downside to aiming for the North Rim from Albuquerque was we’d have to drive an extra couple of hours to reach it, crossing the Colorado River upstream of the Grand Canyon via the Navajo Bridge in Marble Canyon, then coming back around to the North Rim. But it made sense with our overall route, so we went for it; it was an awesome day’s ride through some amazing scenery, especially after turning north at Flagstaff when the sunset brought brilliant shades of rose and lavender out of the vast desert landscapes. Then we drove on into the night with a few more hours on the road ahead of us, but ran into a string of terrific storms with absolutely torrential rain belting down, thunder & lightning, the full works, and we didn’t make good time.

So when we found ourselves approaching the small community of Marble Canyon late that night, we decided to ask at the gas station if there was anywhere we could pitch up to sleep. Pressing on seemed like a bad idea, and we figured it’d be safer to stop for the night and finish off the remaining two hours of the drive in the morning (well, as long as some psycho hillbillies didn’t come along in the night, we joked – little knowing that a few weeks later in the Rockies we would have a run in with precisely one of those, which really wasn’t funny at all).

As luck would have it there was a pair of guys sat outside the gas station drinking beers, one older chap, one around our age i.e. early 20s (…yes, this is quite an old story!). The older bloke gave us directions to somewhere we could camp, which sounded totally sketchy and exactly the sort of place a psycho could follow you and act out his horror movie fantasies; we ummed an ahh’d about that for a minute, and then the younger guy did us one of the most absolute solid bits of random kindness I’ve ever experienced from a stranger – he invited the four of us to crash on his cabin floor for the night, having only just met us, and then went out of his way to make us as comfortable as possible. 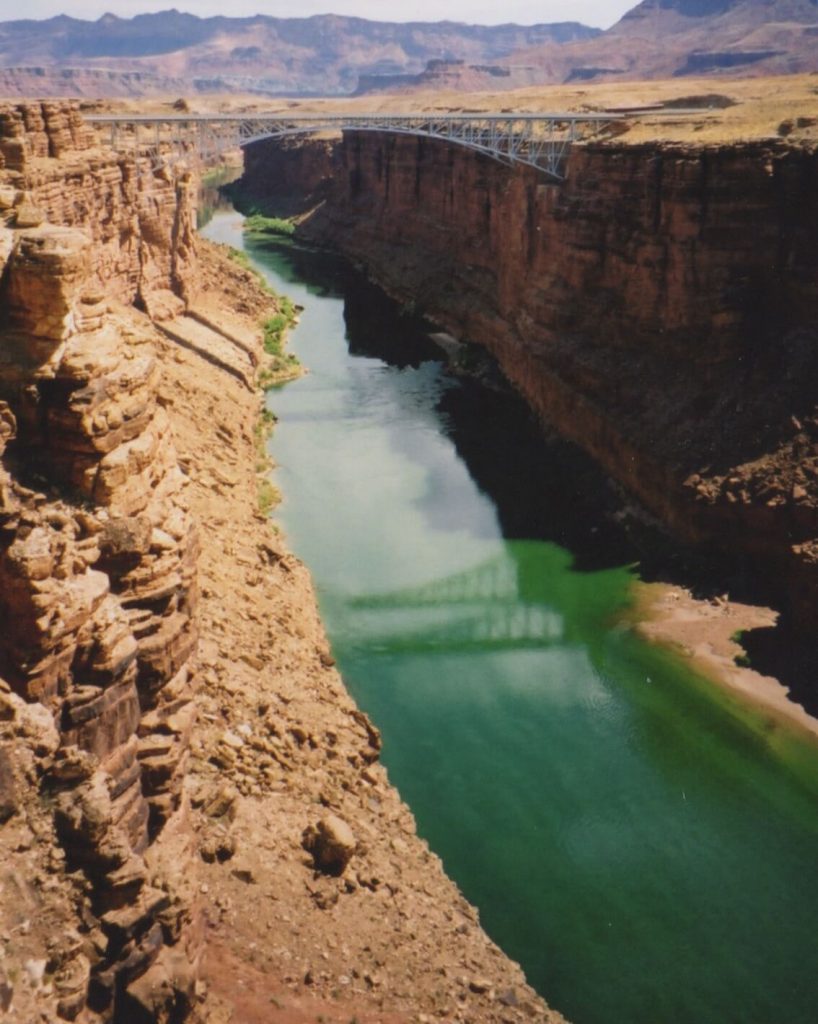 Turned out he was from Phoenix (in the south of Arizona), and was in Marble Canyon for the summer to get his fly fishing guide’s licence; his name was Zach and he had a cabin near the gas station, and with the four of us as guests plus himself it was a pretty tight fit.

But he made sure we had a bite to eat, and we hung out with a few beers and watched a DVD (Meet the Parents); he had to be up and out before dawn to go fishing, so said he’d leave us sleeping and told us to help ourselves to breakfast and to simply close the door behind us when we left. Not much need for locks out there, apparently.

But before we bedded down for the night, he took us out for a walk to the canyon. Marble Canyon the town is named for the geographical feature of the same name, a part of the Grand Canyon system; the Colorado River flows south through Marble Canyon and then when it cuts west it opens out to become the Grand Canyon. It’s a spectacular sight in its own right, nothing on the scale of what it becomes downriver but still a deep, dramatic gorge cut through the desert by an emerald green river. We couldn’t make out the brilliant colours by the light of the moon which now lit the landscape with the storms having passed, but it looked otherworldly bathed in that brilliant silver light as we walked over to the edge of the canyon and peered in; something I did again in the morning, when it was less mysterious but daylight revealed the beautiful hues of the Vermillion Cliffs and Echo Cliffs framing the valley to the west & east, respectively, and the deep green of the waters below. It really is an amazing spot.

Finally, retuning to the cabin, Zach said it was time for his nightly scorpion round – he’d been stung on the foot a month or so earlier and the resulting days of agonising pain had caused him to adopt a zero tolerance policy. I’d never previously been aware of the fact, but scorpions glow white under UV light due to the chemical secretions coating their exoskeletons (the same sort of glow a gin & tonic has under UV lights in a club). I accompanied him on a walk around the outside of the hut as he shined a UV bulb all over the exterior wall, picking out a number of scorpions hiding in the crevices. These he dispatched unceremoniously with a pair of scissors, though I recall one of them putting up an almighty struggle, gripping the scissors and rapidly stinging the metal with its tail in an impressive display of fighting spirit. To be honest I felt bad for these creatures, but Zach’s descriptions of the pain he’d endured explained this policy – scorpion venom acts on the nervous system with long-lasting and excruciatingly painful effects.

Scorpions weren’t the only critters living on the outside of his cabin though; we also found a black widow spider in its web in front of the window.

“Better get that too,” he said, going after it with the scissors but succeeding only in removing a single leg. The now 7-legged spider fled into a crack in the wall and out of harm’s way, and I figured it would only be karma if one of us was to cop a spider bite during the night…

That led me to ask what exactly would happen in such a situation, and he explained the nearest hospital was over a hundred miles away, but there was a 2-seat light plane and a small airstrip nearby, and one guy in town who could fly it.

“But what if he’s the victim?” was the obvious question. And the answer? He’d be up shit creek without a paddle, that’s what! 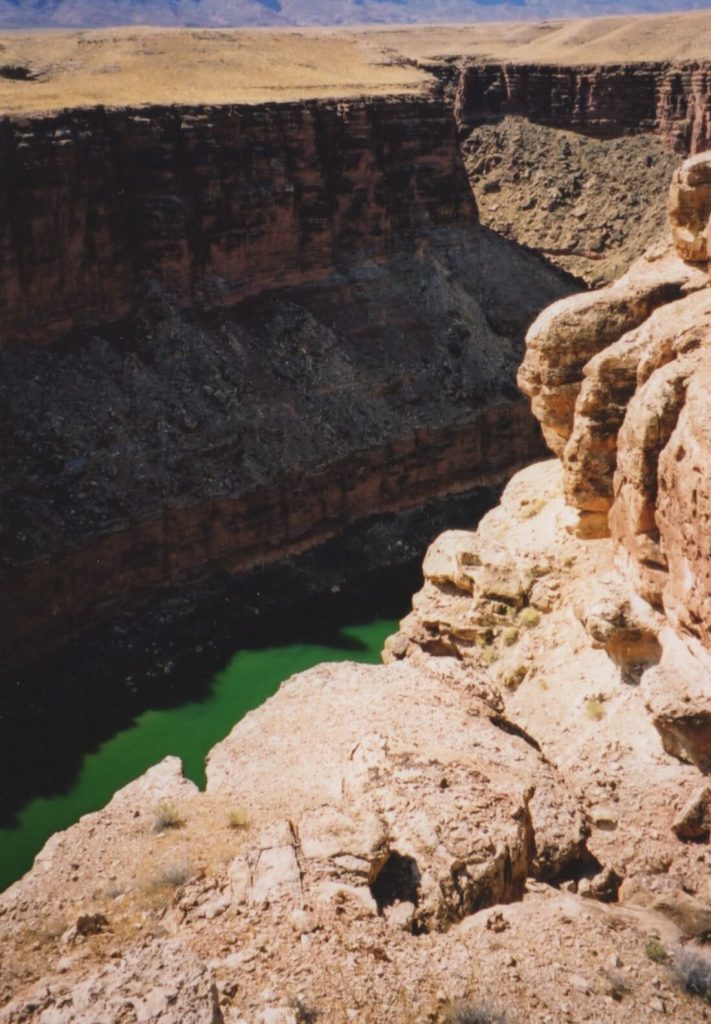 That concluded the evening; and what with the crazy storms, a random act of the warmest hospitality, a moonlit wander in the desert, and a grim but fascinating arachnid extermination spree, it was a pretty memorable one. We bunked down top to tail on the cabin floor, and when morning came our host was gone; I took a quick walk over to see the canyon by daylight, and we were soon on our way. There wasn’t any Facebook back then, no smartphones, but we made sure to note the address and sent him a postcard to say thank you.

Have you experienced any random acts of hospitality on your travels? Leave a comment below!