Tongariro National Park is located just south of Lake Taupo in the centre of New Zealand‘s North Island, and is home to the Tongariro Northern Circuit, one of New Zealand’s Great Walks. The Northern Circuit is a 4-day circumnavigation of Mt Ngauruhoe, and one of those legs is individually famous as a one-day hike called the Tongariro Crossing, which crosses the saddle between Mt Tongariro and Mt Ngauruhoe (these two mountains, along with Mt Ruapehu, form the massif around which the national park is based).

This was the hike I’d come to Taupo to do, following a ski season in Queenstown – I would have liked to do the full Northern Circuit, but as it was Spring there was still a lot of snow up there and doing the full circuit would have been a fairly serious undertaking which I wasn’t equipped for (and certainly didn’t fancy tackling by myself!). On the other hand it was easy enough to join a guided group hike for the Tongariro Crossing (arranged through one of the outdoor companies in Taupo), with crampons and ice axes provided and a guide with the appropriate know-how and gear to cut the ice steps which were necessary at one point. 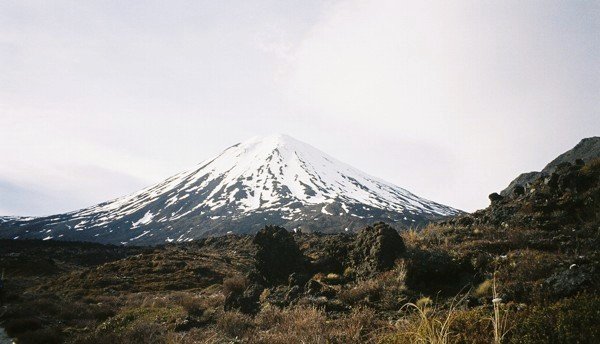 Whilst it isn’t compulsory to have a guide to do this hike, in winter and spring I think the only way you can arrange transportation to and from the trailheads is by joining a guided group. In the summer months, there shouldn’t be any issue with arranging transportation from Taupo and then just doing the walk by yourself – just make sure that you have the map, the proper equipment, and know what you’re doing in an alpine environment. The Tongariro Crossing has proven fatal for a number of hikers over the years who underestimated the potential dangers of alpine conditions, so if you’re a backpacker who fancies trying a famous and beautiful hike but doesn’t have much mountain experience, it would be wise to go with a guide even in summer (the Tongariro Crossing official website has all the relevant safety information and advice) 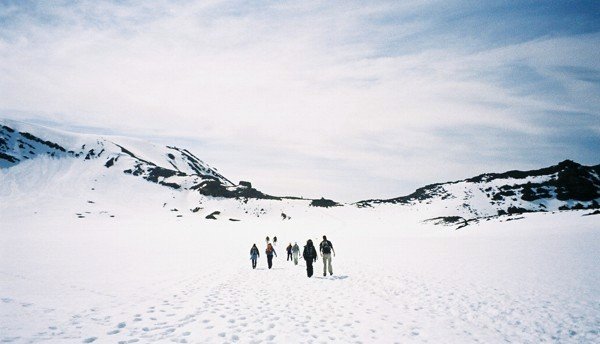 As for the track itself, it’s 19.4 kilometres long and takes up to 9 hours depending on the conditions. We were hiking in snow at the higher elevations, with very strong winds at one point and delays while our guide cut new ice steps, so it did take the best part of a day. The usual direction is from Mangatepopo Valley to Ketatahi, and the first part of the hike is actually the toughest as it involves a steep scramble up to the south crater. The quads definitely got a workout, and as we sat resting at the top of the climb a couple of English lads explained to the group that they’d recently climbed a volcano in Nicaragua which was much harder, so this didn’t seem too bad in comparison! They also said that the volcano in question – Volcan Concepcion – is on a very beautiful island in Lake Nicaragua, and that it was well worth the effort… as I was on my way to Central America after NZ, I immediately put that volcano on my to do list – and, a few weeks later, climbed it. After the climb up to south crater, the second part of the hike sees you crossing an alpine plateau with the main crater and several beautiful lakes (which we couldn’t see as they were still frozen and covered with snow), before finally descending down a forested path on the other side. It’s said to be one of the best single-day hikes in the world, and to be honest it probably did live up to its billing. I don’t think I’ve done a better one, anyway. So if you’re heading to New Zealand’s North Island and keen for some hiking, put the Tongariro Crossing on your list.

Have you done the Tongariro Crossing, or the full Northern Circuit? How was it? Any questions? Leave a comment below and I’ll get back to you.

Airbnb also has plenty of options in Taupo, if you’ve never used it before you can get a 30 dollar discount if you sign up with this link

(These are affiliate links i.e. if you use them to purchase insurance or book a room, 4corners7seas will receive a commission – this commission comes out of their profit margin at no extra cost to you. I’m recommending them because I know and trust them from personal use; thank you in advance should you choose to use my links)