↓ Skip to Main Content
Home › Southeast Asia › Malaysia › Thailand to Malaysia Overland: getting stranded at the eastern border with a lonely policeman (or, how NOT to travel to the Perhentian Islands)

Thailand to Malaysia Overland: getting stranded at the eastern border with a lonely policeman (or, how NOT to travel to the Perhentian Islands)

How NOT to travel from Thailand to Malaysia overland!

(for the sensible routes from Thailand to Malaysia, scroll to the lower half of the post)

Hat Yai bus station. The day was getting old, the sun dropping and the shadows drawing long, and I wasn’t sure if I had time to make it to Kota Bharu in Malaysia before the border closed. Earlier that day I’d made a last-minute decision to change my route and head to Malaysia’s Perhentian Islands (instead of Thailand‘s Ko Pha Ngan) to catch up with some friends (or rather, my ex-girlfriend and her friends); I’d almost caught them in Hat Yai, but their bus had just pulled out before mine arrived. I knew they were planning to take the ferry to the Perhentians in the morning, and assumed (incorrectly) they were on a bus to Kota Bharu – so I decided to chase them and take the next bus to Kota Bharu, if indeed there was one. 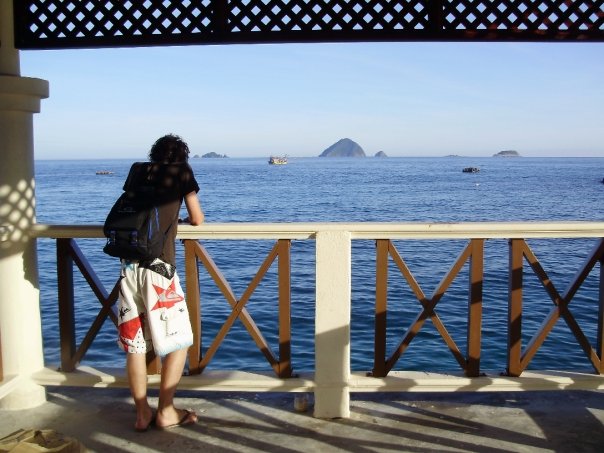 In actual fact, they’d gone to Penang (on the opposite coast), from where they were to take an early morning bus across Malaysia to reach the ferry, and my chances of reaching Kota Bharu that night were already absolutely zero. But that didn’t stop the bus company guy from lying through his teeth and taking my money anyway…

I told him I wanted to go to Kota Bharu (on the northeast coast of Malaysia and the nearest city to the Perhentian Islands) in the hope of catching up with them there, asked if it was still possible that day, and was sold a ticket for a minivan which he absolutely promised would take me all the way through to Malaysia. 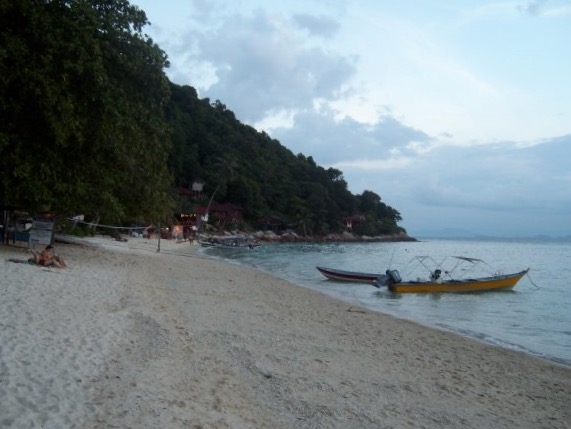 Beach in the Perhentian Islands

Now, the reason I was so keen to get this assurance wasn’t just that I was worried I wouldn’t catch my friends that night, but because I knew this bus would be passing through Thailand’s far southern Patani region – a majority-ethnic Malay area which has seen a decades-long separatist struggle by armed groups aiming to split the area from Thailand and join Malaysia; thousands have died over the years in terrorist attacks and gun battles between separatists and government troops & police. I was well aware of all this and wasn’t just blindly wandering into a conflict zone, but I also knew that at that particular time the violence was dormant and the highway was considered safe (I double-checked this with the policeman on duty at the bus station); so I decided it was okay to go, so long as the bus just passed through and I made it to Malaysia that same night. I didn’t want to be spending the night in that troubled region though, as you never know when trouble could flare back up again; it was a slight risk as it was, and that’s why I’d doubly and triply sought the bus company’s assurances, and he had absolutely promised the minivan would take me to Kota Bharu.

Well, that man was an utter shameless lying bastard, and after a very nerve-wracking 4-hour journey during which we were flagged down at military checkpoints every 20 minutes while jumpy soldiers quite literally pointed their rifles directly at those of us inside while everyone’s documents were checked, and with all the other passengers having disembarked one by one and clearly not heading to Malaysia, we finally pulled up in some dark desolate middle of nowhere on the
Thai side of the border, and the driver told me to get out. I was hesitant (as in I’m thinking “where the actual fuck am I and what the hell is going on and am I about to get kidnapped?!”), which only made him agitated; he grabbed my bag out of the back and chucked it on the ground, pointed towards some dark and forbidding buildings, and yelled at me. I tried to ask him to drop me at a hotel, or at least take me into the town centre, but I couldn’t say it in Thai, he didn’t speak English, and he was in no mood to attempt any other form of communication. He looked about ready to stab me and picked my bag up again and hurled it further away, so out I got and off he drove.

At this point it would be fair to say I was shitting myself; I was unsure exactly where I was or where to go, it was dark and isolated and felt very sketchy after hours of checkpoints and guns, and I was aware of a pack of dogs close at hand and I’m no fan of the roving packs of stray dogs in Thailand. I shouldered my pack and jogged towards the cluster of very closed-looking buildings over yonder, and to my immense relief found one of them to be a border police post with one chap on duty.

He spoke very little English and I speak very little Thai, but I managed to communicate that I wanted to go to a hotel and cross the border in the morning; he in turned conveyed that I would be staying with him for the night, an offer I most gratefully accepted.

He pulled out a little camping bed for me, and I would’ve been perfectly happy with that; but then this chubby middle-aged policeman with the kindly face absolutely made my day by serving me up a plate of rice and eggs. That’s all it was, a simple dish of rice and pickled eggs, but I hadn’t eaten since lunchtime and wasn’t expecting to eat until Malaysia, and it tasted so damn good.

Small talk wasn’t really possible, so as I wolfed down my rice and eggs he sat working away at his computer, presumably dealing with the daily reports or whatever. And then I had an idea – perhaps he’d let me email my ex to update her where I was and to say I’d be on the morning ferry.

Email checked and sent (and now realising they’d gone to Penang), I turned in while my man watched a bit more porn, and then he retired to the back room. Sometimes when you’re travelling you find yourself in some unexpected situations, and kipping on a camping bed in the front office of a border post wasn’t something I’d ever expected to do! A few hours later he shook me awake again, gave me a coffee, and indicated I should be on my way; thanking him profusely, I walked the short distance to the border, crossed the bridge from Thailand to Malaysia, and found a bus to Kota Bharu and another from there to the ferry pier where I rendezvoused with my ex and her friends, and we then spent a few days in the beautiful Perhentians. While I guess he was basically just doing his job, he did it with the warmth of genuine hospitality and I’ll never forget that policeman’s kindness and his delicious rice and eggs.

If you’re heading from southern Thailand to Malaysia, the usual (and easiest) route is a minivan from Hat Yai to Penang, going through the Padang Besar border crossing (by far the busiest crossing on the Thailand Malaysia border). An interesting alternative route exists from Thailand to Penang by sea, which involves island hopping from Thailand’s Ko Lipe island to Malaysia’s Langkawi island, and from there to Penang. These islands are connected by regular ferries, and Ko Lipe is also connected to other Thai islands like Ko Lanta and Ko Phi Phi – in fact, it’s possible to island hop all the way from Phuket to Penang without touching the coasts of Thailand or Malaysia. I haven’t done this island-hopping route all the way, but needless to say it’s a very appealing idea if you have the time!

Whichever way you decide to go from Thailand to Penang, after visiting Penang you can then cross Malaysia to reach the Perhentian Islands – the Cameron Highlands and Taman Negara park can both also visited on the way to the Perhentians, or on the way from the Perhentians back to Penang or down to Kuala Lumpur.

As Penang is most likely a part of your intended itinerary anyway, it really does make sense to head there first when going from Thailand to Malaysia overland, thus avoiding the conflict region. However, if you do want to skip Penang, because you’ve been there before or don’t fancy the dog-leg route or whatever, and want to head directly from Hat Yai to the Perhentians, then I would advise two main things:

First of all, check and double-check that the security situation is clear. Don’t do this with the bus companies, but ask the police directly in Hat Yai; they should have the latest information and be the most reliable source of it. Also double-check whether your own country has any travel warnings in place for the area, and whether or not your travel insurance will cover you while you travel through the area (most insurance companies have a clause that they won’t cover you in areas under your government’s travel advisory warnings, unless you specifically pay more to be covered there). Take all of this into account.

Secondly, don’t get yourself stranded at the Thailand Malaysia border overnight! There is no cross-border transportation, meaning you have to take a van to the border, walk across, and then a bus or van on the other side; it’s not a 24-hour border, and as I found out you can’t trust the Hat Yai bus station on any of that. The Thai border town of Sungai Kolok is 4 hours from Hat Yai, and the Malaysian border town of Rantau Panjang is about an hour from the city of Kota Bharu. It’s hard to pin down the actual closing hour of the border, but I left Hat Yai before sunset and didn’t make it in time; I’d say you’d want to be leaving Hat Yai at lunch time (i.e. if you’ve stayed overnight, check out and go), or be leaving Kota Bharu by mid-afternoon if going the other way. If you have a choice between crashing overnight in Hat Yai or gambling on an afternoon bus to Sungai Kolok, I’d say crash overnight in Hat Yai and continue on the next day.

If you do manage to end up stranded at the border, look for the border post and hopefully you’ll get taken in by a friendly cop with a plate of rice & eggs!

Also check out my overland travel guides for Thailand and Malaysia

2 comments on “Thailand to Malaysia Overland: getting stranded at the eastern border with a lonely policeman (or, how NOT to travel to the Perhentian Islands)”