Xiaolongbao (小籠包, literally ‘little basket buns’) are a specialty of both Shanghai and Taipei – small dough parcels of pork and soup, they’re like bite-sized explosions of delicious joy in your mouth. 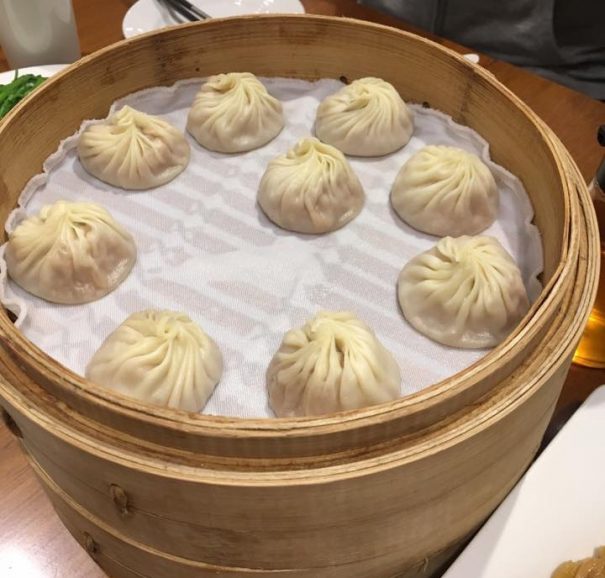 Originally from Shanghai, xiaolongbao became a local staple in Taiwan with the wave of Chinese immigrants that fled there in 1949 at the end of the Chinese Civil War, as Mao’s communists defeated the Kuomintang nationalists. The Shanghai and Taiwan styles have diverged slightly over the years since – the Shanghainese say theirs are the original and best, while the Taiwanese say that although xiaolongbao originated in Shanghai, they were perfected in Taiwan (the main difference is apparently how thick the skin is, and how soupy the contents – the Taiwanese version having thinner dough and a touch more soup).

I’m not going to weigh in on that debate, because in Shanghai I’ve only sampled the cheap street food version (which were also really good), whereas in Taiwan I’ve had the Michelin-starred restaurant version so it’s hardly a fair comparison! What I can say is that those Michelin-starred xiaolongbao were hands down the most delicious dumplings I’ve ever eaten and some of the best food I’ve ever eaten anywhere, and they should definitely be on your to-do list for a visit to Taipei.

The place is to go is Din Tai Fung (鼎泰豐), a Taipei-based restaurant which now has branches all over the city and all around Taiwan, plus a few overseas. I’d already been living in Taipei for months by the time I finally got round to going – I’d eaten plenty of xiaolongbao from mom & pop stores, street stalls, and night market vendors, and they were all really good, but I’m not a fan of lining up for food and needed some extra motivation to do so for xiaolongbao. That finally came in the form of a group of friends visiting from Japan, and though we had to wait for 45 minutes for our table it was worth every second!

The dumplings at Din Tai Fung are pretty damn expensive by usual Taiwan dumpling standards, but it’s also one of the cheapest places in the world with a Michelin star (and therefore the only one I’ve yet been to! update: this is no longer the case following my latest visit to Japan where I hit up Tokyo’s two Michelin star ramen joints); the service is impeccable, the food is amazing, and it’s great being able to watch the kitchen staff preparing the dumplings to order behind glass screens and see the precision and efficiency that goes into such a seemingly simple dish.

Din Tai Fung has locations in all the big department stores around town; the main ones are Sogo and Takashimaya, so find the nearest one of those and there should be a Din Tai Fung in the basement food levels. Or just head to their flagship restaurant on Xinyi Road near exit 5 of Dongmen Station, or the huge one in the basement of Taipei 101 Mall (at the base of the famous Taipei 101 skyscraper); it’s crazy popular, so be prepared to go on a waiting list for up to an hour (perhaps more) if you go at a busy time.

The staff at Din Tai Fung speak excellent English and are well-used to serving foreigners, so they’ll explain the various options and the correct method for eating them with the accompanying shredded ginger and dipping sauce. There’s a range of dumpling fillings available in addition to the classic pork, including chicken, pork & scallion, and shrimp, and red bean or sesame buns for desert. Everything we had was absolutely amazing – the xiaolongbao at Din Tai Fung were seriously so good they put a massive grin on my face for the rest of the night!

Have you had xiaolongbao in Taipei? Any questions? Leave me a comment below!