Life in Taipei: Stumpy the Lizard 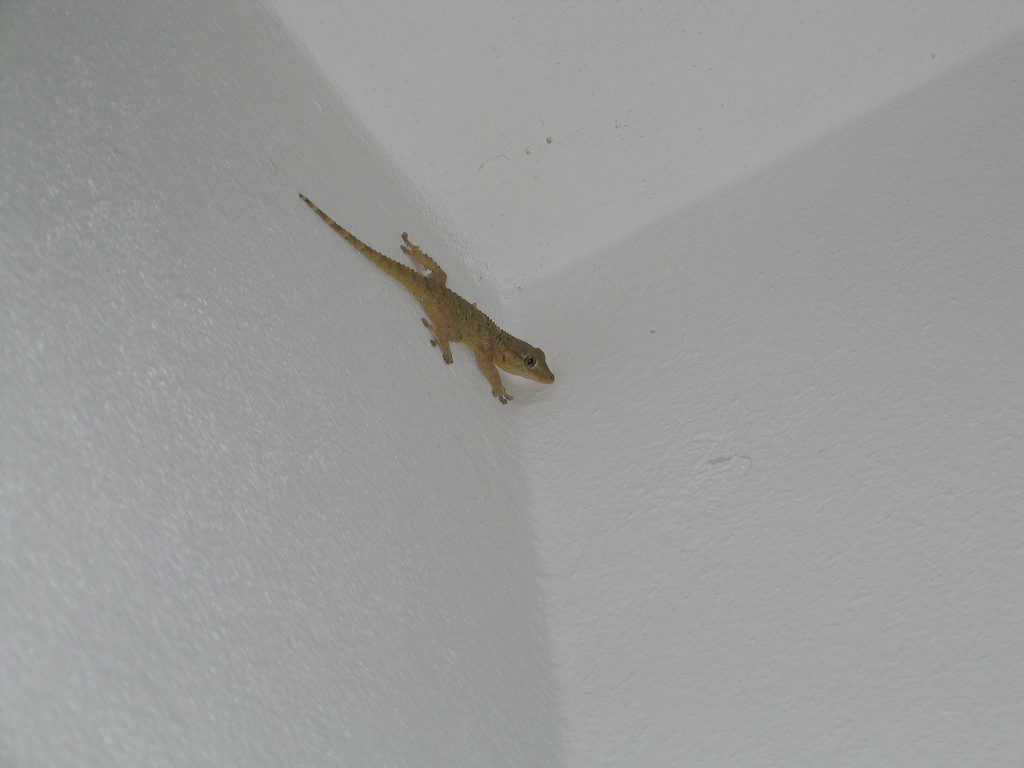 I never took a picture of Stumpy, but here’s a pic of a similar gecko from Flickr (credit: see end of post)

Fucking bugs. Fucking cockroaches, fucking flies, and fucking, fucking, fucking mosquitoes; one thing you’re always going to have to put up with if you go live in the Far East is all the damn bugs.

If you’re in Korea or Japan then at least it’s only a summer thing, the colder winter months being nice and bug-free (doesn’t seem to apply in China though – even in the brutal cold of a Beijing winter I encountered the odd roach); but if you’re in the tropics, they’re ever-present and they’re something you just have to deal with – and they’re all massive to boot.

This is also the case in Taipei – though it’s technically sub-tropical, lying just outside the tropics (the Tropic of Cancer runs across the middle of Taiwan), and does cool down for a couple of months in winter, it feels tropical most of the time and has some serious bugs.

One particular room I rented for a couple of months was brutal – monster cockroaches would sometimes pop out of the drains or suddenly appear running up the wall, and the daily battle with the mosquitoes was an exhausting endeavour; just as you’re drifting off, that high-pitched buzz whines somewhere near your ear, or you feel one landing gently on your nose, so you spring to action, hit the lights, and spend the next 30 minutes playing hide-and-seek.

Thankfully we do have some allies in this struggle – all those insects provide plenty of sustenance for Taiwan’s spiders and lizards.

Now, if you’re one of those who hates spiders and lumps them in with all the other critters, I have to warn you – Taiwan has some pretty impressive arachnids, especially out in the hills: 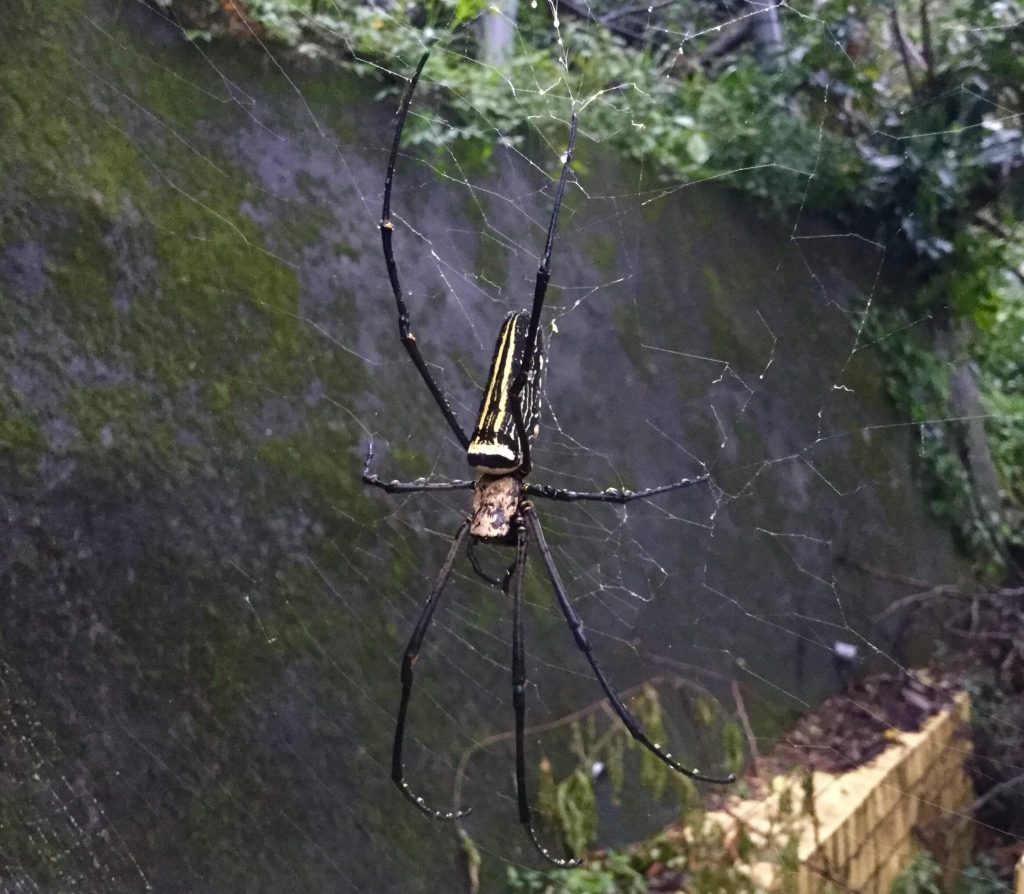 Came across this beauty while hiking near Jiufen

Never saw anything that big in the city though! As for me, I don’t hate spiders at all, so I’d always welcome a couple of resident spiders to do pest control on all the little flying bastards.

Unfortunately I didn’t get any spiders in that insect-infested building for some reason, but I did get another even more useful insect hunter – a little house gecko set up shop behind my fridge.

It scared the shit out of me first time I saw it – I’d just got into bed when I noticed a dark shape wriggling up the wall, differentiated by the faint glow of the LEDs in the room. I jumped up and hit the lights, then realised it was a gecko – one of the good guys. I figured a gecko in the room would mean fewer insects in the room, and left it to it.

And so this little lizard took up residence behind my fridge (they like the heat back there apparently), emerging at night to eat the mosquitoes that were trying to eat me. A handy little symbiotic relationship… or so thought.

The arrangement lasted for a week or so, until I saw the mother of all cockroaches emerge from and then scuttle back under the fridge; it was a real monster, like one of the CGI aliens from the movie Starship Troopers (only a slight exaggeration). Pulling the fridge out from the wall, I found a whole cockroach party going under there, the one huge one along with a bunch of smaller ones – all feasting on a veritable banquet of gecko shit. Of course.

Should’ve thought of that really – the gecko eats the mosquitoes, but obviously some of that biomass has to come out again, and a pile of lizard droppings is a nice easy feed for the roaches.

Should’ve thought of it, but didn’t – and now my reptilian friend had to go.

I didn’t want to kill it, but catching a lizard is very tricky indeed, as I soon discovered. There I was at 2am with an empty take out container in one hand and a piece of packaging cardboard in the other, hot & bothered and sweating profusely as I tried and failed to catch the little bastard. It was just too quick and too alert to what I was up to, and had a couple of handy escape tricks up its sleeve – one being to take a flying leap out from the wall, launching itself a surprising distance across the room to escape my clutches. This was something I had no idea they could do, and it makes them extremely difficult to trap; but the second trick I was already aware of – that of severing and dropping their own tail.

They usually do this when a bird grabs them by the tail, but although I never touched its tail, it still came off – they have a set of muscles at the base of the tail they can contract in emergencies to sever it, something they do in life or death situations.

This wasn’t a life or death situation, but the poor little thing wasn’t to know that and just as it seemed I was about to finally catch it, pop! off came the tail. This actually surprised me enough that I hesitated for the fraction of a second that allowed it to escape yet again.

So now I had a gecko tail writhing around on the floor (the muscles continue spasming for a while after the tail is dropped), and an amputee lizard hiding under the bed… this went on and on for ages, furniture was pulled and shunted around, I sweated and cursed, and I completely failed to catch it – the contest finally ended with it slipping out under the door and running off down the hallway.

After that I kept seeing it hanging out in the stairwell of the building (this was your typical older Taiwanese residential building, with a bunch of apartments off a dingy central stairwell), easily identifiable by its stump of a tail – hence the name I gave it, Stumpy.

I have no idea if Stumpy was male or female, but I was glad it was living out in the stairwell, hopefully filling its boots with mosquitoes. I felt bad about the stump, about having scared it badly enough to drop its tail, but it would eventually grow back.

And then one night as I lay back in bed, I made out a dark shape on the ceiling – Stumpy was back in my room! Why on earth it went back in there after the trauma of the previous time, I have no idea – they’re obviously not all that smart. Thankfully this time I had a shoe box to hand, and the larger container (with fitting lid) made it much easier to catch it; it still cost me a good hour’s sleep, but eventually I had Stumpy in the box, unharmed, and this time I deposited it downstairs on the outer wall of the building. The light over the main entrance always attracted a cloud of insects at night, so I figured it was a decent spot for a gecko – and sure enough, I did see Stumpy several more times, hanging out near the light and pouncing on insects. And I hope Stumpy is still there, thriving, with a fully formed tail.