Life in Beijing: the Street Barber of Shilipu 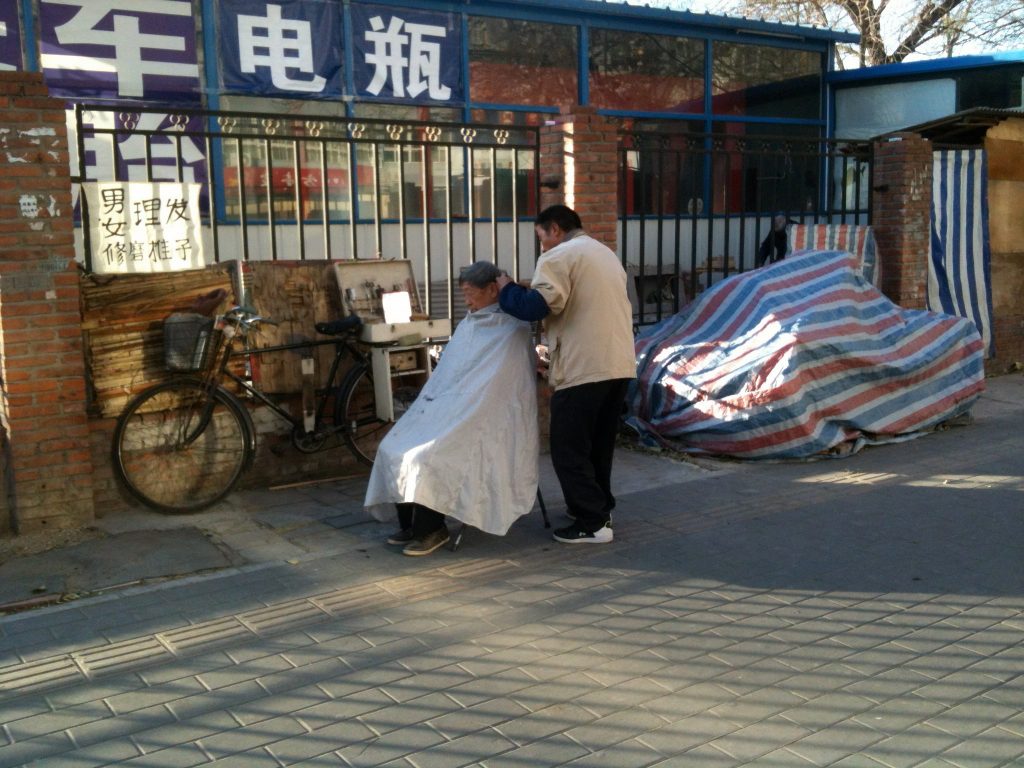 I was just going through some old photos and found this one of a pop-up street barber near my old place in Beijing. There isn’t much of a travel blog post I can write to go with it, but it shows a side of Beijing (and China) quite different from the grandeur of the Forbidden City or the Greatness of The Wall. That is, the Beijing experienced day-in day-out by millions of people living in it (millionaire fat cats and Party bigwigs not included, living as they do in their own little Ferraris-and-designer-bullshit bubble), all those people hustling day-by-day to make enough to get by using whatever means they have… the tuk tuk drivers running commuters back and forth from the subway stations to the monolithic apartment blocks most call home; the old ladies selling socks and bras on pedestrian overpasses, sat on little plastic stools with their wares laid out before them on dirty sheets over the concrete; the stallholders whipping up portion after portion after portion of delicious bing (savoury pancakes) for the hordes of passers-by; the harried office workers and shop clerks elbowing their way into and out of insanely overcrowded subway carriages, shuffling through the claustrophobic human cattle experience of some seriously shittily-designed platform transfers; and the gruff old gentleman with his pop-up bicycle barbershop near the foul-smelling public toilets on a side road near Shilipu Station, there some days, absent others, wielding his scissors and comb with bare hands even in subzero temperatures.

I always wondered where he was on the days he wasn’t there. Maybe he had a few different spots and rotated around them, maybe he had an entirely different job and did that as a side income, maybe he just did a couple days a week for a topup. Who knows… but I admired his hustle, and I admire all of their hustle, all those millions in Beijing doing what they have to do. It’s a tough place to exist for many, yet it still beats a life of toil in the rice fields, and the opportunities it presents for a better future are a powerful call – despite the Dickensian life of a migrant worker.

Also, make sure to sign up for a VPN service before heading to China so you can use the internet as normal (what’s a VPN and why do I need one?). I always use Express VPN (click banner for details):

4 comments on “Life in Beijing: the Street Barber of Shilipu”