Although Australia isn’t the first country that springs to mind when you think of winter sports, the south of the country does experience fairly chilly winters, and the Snowy Mountains along the New South Wales / Victoria border rise to over 2,400m at their (and Australia’s) highest point, Mt. Kosciuszko. The mountains and the latitude are both high enough that for a few months in winter the Snowy Mountains live up to their name, and as a result are home to half a dozen ski resorts – two of which I’ve ridden, Perisher and Thredbo.

Thredbo advertises itself as the mountain with the greatest vertical drop in Australia, and Perisher markets itself as not only the largest ski area in Australia, but in fact the largest in the entire Southern Hemisphere. This latter claim is based on the total surface area though; the lack of significant vert means that Perisher has a lot of lifts granting access only to short runs, and I felt that Thredbo had more to offer (I only spent one day at Perisher though, versus a season in Thredbo, so I may not be doing Perisher justice).

(*this is the greatest vertical drop available for a single run, rather than for the resort overall. The highest and lowest points are located in different areas and cannot be done as a single top-to-bottom run)

I arrived in Australia on the back of a 4-month bit of backpacking around India and SE Asia with my good friend Danny, and while in Cambodia we’d befriended a Melbourne-based Aussie who invited us to stay with him when we arrived. That we did, and while Danny found himself a job in Melbourne my thoughts turned to the approaching winter – when we’d originally booked our flights to Oz via Asia, I’d been keen to time it so that I’d arrive in Australia in good time to find some ski work before the season got underway. So after a few weeks of chilling in Melbourne, exploring the city, drinking, watching the French Open and the Euros, and sending lots of emails to hotels and bars in ski resorts without any luck, I decided the best way of getting a job in the snow was to actually be in the snow, and boarded a bus to Canberra (a lot of people say Canberra is the most boring place on Earth, and it’s certainly up there with the dullest I’ve ever visited). One night there and then it was on to Jindabyne (or Jindy as the locals call it), a small town which is the biggest town in the Perisher / Thredbo area. The Perisher ski area is a short drive from Jindy, while Thredbo is a resort town located 30 minutes drive up the valley and is more of an Alpine-style ski resort with all the hotels, bars & cafes etc located at the base of the slopes. After a few days of job hunting in Jindy and a day riding at Perisher, I was invited up to Thredbo for an interview and landed a job at a cracking little bar named the Apres Bar, in the basement of the Denman Hotel. Thus I ended up spending my second ski season in Thredbo, and I’m glad I did – those three months (it’s a short season Down Under) were an absolute blast, working, riding, and partying with an awesome bunch of people. 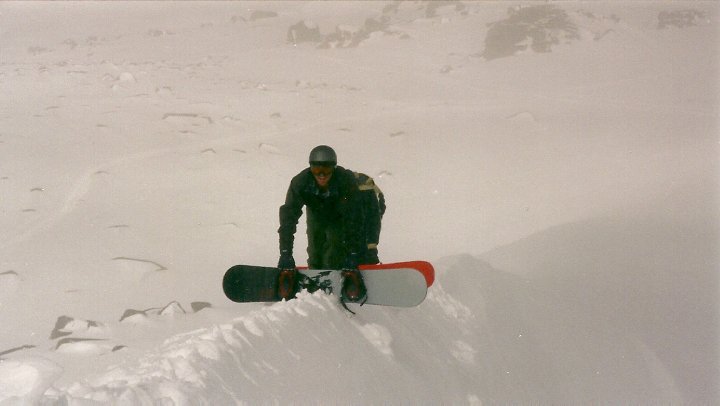 As for the mountain itself, it was a pleasant surprise – much bigger than I’d expected for an Australian ski resort, and with much better snow (though I caught it on a good year – it’s hit-and-miss as far as annual snow conditions go). You can ski the whole thing out in a day if you’re a competent skier, but it does have a decent vertical drop of 672m and a good few options for getting down from top to bottom so it can keep you entertained for a few days if the snow’s good. They also do a solid job with their terrain parks, with a beginner park, intermediate park, and advanced park all on offer with a full range of features.

The big kickers were still beyond me at that point, but my Thredbo season was the first time I attempted 360s (frontside, off a little kicker in the baby park), landing a few successfully before one-too-many landed me in the ski patrol medical centre with a season-ending ankle sprain – thankfully not broken, though the patroller thought it probably was so insisted on the full stretcher treatment. The season was already almost over anyway, so that finished it for me.

Thredbo also has an enticing-looking backcountry area beyond the top chairlifts. We ventured out there a few times, which was lots of fun but to be honest it involves a lot more hiking than riding and isn’t really worth it, especially considering that a number of people have lost their lives doing so. We did have one awesome day when we hiked all the way up to the summit of Kosciuszko and then rode and hiked (mostly hiked) back to town – not an amazing day of actual riding, but a great day out in the mountains with friends. But as I said, people have been unlucky out there so if you do want to go backcountry, only do so if you have locals to guide you, the sun is shining and the weather’s expected to stay clear, and the avalanche conditions are okay. If you don’t know, don’t go. 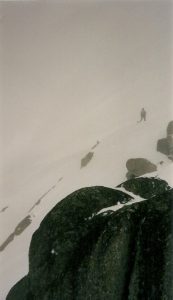 A better bit of out-of-bounds riding from Thredbo is Stanley’s, which is just beyond the boundary fence on the right side of the piste map (to skier’s left of Cruiser chair). Again, all the usual warnings apply with regards knowing where you’re going and being careful about the conditions, and don’t underestimate the terrain or overestimate your ability to ride it. There’s a gorge there and it can avalanche, and you don’t want to be in there when it does. Also if you go too far downhill without cutting back in bounds, you will just have to keep going down until you reach the road. Which is pretty far, through dense forest, and you’ll be walking most of it; make sure to cut back inbounds well before the trees. If you do end up riding right into the forest, you’ll have to unstrap and get ready for a long hike out. The road runs right along the valley so as long as you keep heading downhill you should reach the river and then the road on the other side; then turn right and follow the road back to town (or stick your thumb out and hitch). But really, having done it myself, you don’t want to be doing this, especially in poor weather – if you do hit Stanley’s, stick to the upper section and make sure you stay high enough that you can get back in bounds. One more option is the run down to Dead Horse Gap. I never did that one, but it’s well-known in the area and a quick Google should bring up all the info you need – one thing you will want is a car pre-parked at Dead Horse Gap with which to drive back to town.

Overall, while I wouldn’t recommend travelling to Australia specifically to ski, if you’re a skier and you’re in Oz at the right time of year, Thredbo (or Perisher) is well worth a visit – and make sure to drop in to the Apres Bar for a post-slope cocktail or two!

Resources and Useful Links for Riding at Thredbo & Perisher

snow-forecast.com does exactly what it says on the tin, and is my usual go to for accurate snow forecasts:

Have you been riding in Thredbo or Perisher? What did you think? Are you a local who thinks I’m talking rubbish, or do you have a great tip to share? Leave a comment below and I’ll get back to you.

This page contains affiliate links i.e. if you use them to book accommodation or purchase travel insurance, 4corners7seas will receive a commission from them; this commission comes out of their profit margin at no extra cost to you. I’m linking to them because I know, use, and trust their products. If you’ve found this page helpful, please consider using my links; thank you in advance should you choose to do so!