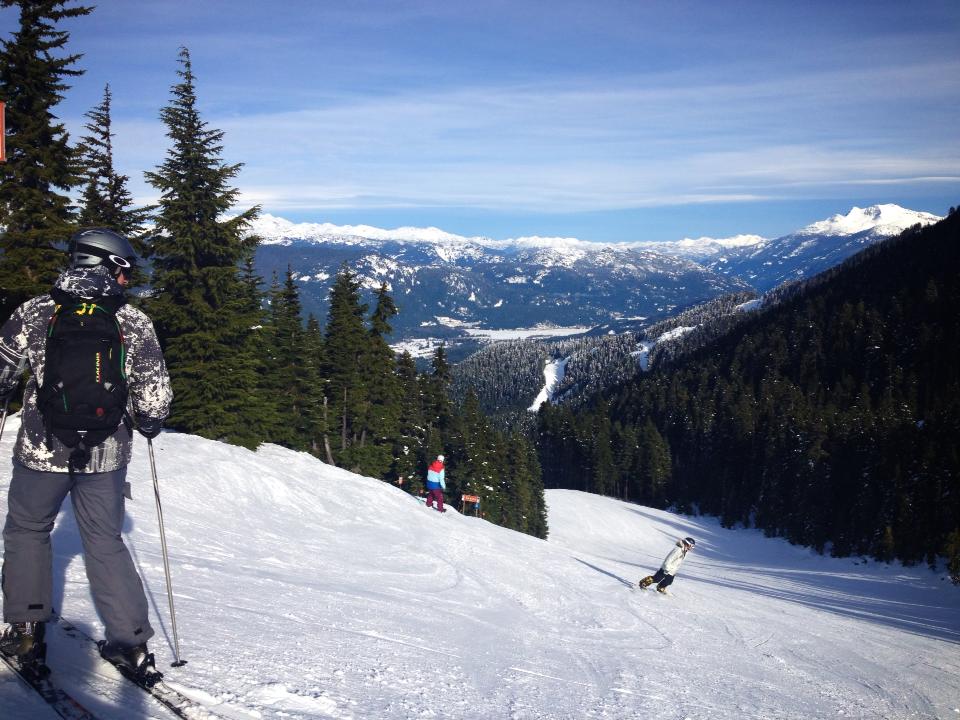 Well, this is supposed to be a review of Whistler Blackcomb; but really, what’s the point?! Fact is that if you’re a seasoned skier or snowboarder, you already know all about Whistler and how awesome it is, and there isn’t a great deal I can add except to confirm it. It’s the biggest resort in North America (and the biggest resort anywhere outside Europe), and is one of the most famous and talked-about ski areas in the world. Furthermore, given its size and the fact I’ve only had a total of maybe 10 days’ riding there, I don’t really know the mountain well enough to be able to give insider tips on the sweetest off-piste spots and so on. But anyway, check out these juicy stats:

While I can’t add much to the information that’s already out there, what I can say is that Whistler does justify its reputation. It’s a large ski area which packs in just about every type of terrain you could possibly wish to find in-bounds at a ski resort; what with Blackcomb’s glacier, Whistler’s back bowls, and great tree-skiing and pistes of all difficulty levels on both mountains, plus a variety of world class park & pipe options, there’s just so much there to keep you entertained. And although it’s a lot smaller than the largest European mega resorts, it matches them for the quality of terrain available; and the (relatively) smaller size means it packs all that great terrain into a more compact area, allowing you to hit a bunch of different stuff without having to go up and down a series of boring lifts and runs in between (which is one of the drawbacks of places like Morzine). Whistler also has an Alpine style resort village at the base, unlike the majority of Canadian ski areas, so it has plenty of apres ski action, restaurants to suit all budgets, and the full range of accommodation options from backpacker to luxury.

The only downsides really are the snow quality (which is often wet and sticky due to the coastal BC maritime climate), the crowds (meaning fresh tracks are hard to get), and the high prices – though of course, the crowds and the prices are the way they are because it’s such a great mountain. At Whistler you pay more than elsewhere in BC, but you do get plenty of bang for your buck. So, if you’re seeking fresh tracks in fluffy powder, that’s one area where Whistler isn’t the best choice (the BC interior resorts such as Revelstoke are better in that regard – or you could try Hokkaido!); but if you’re looking for a great all-round mountain with all types of riding available and action-packed into a relatively compact area, Whistler doesn’t disappoint.

For those heading to Whistler for the season but without a job already lined up, my advice is to get there early, before the season opens – aiming for November would be advisable. In my case, I didn’t get there until January due to a hold up with my working holiday visa. This meant I’d completely missed the boat, and after a fairly depressing week of fruitless job hunting (but including a couple of days of awesome riding!) I gave up and took the Greyhound over to look for work in the Banff / Lake Louise area. That didn’t work out either, so I backtracked to Revelstoke for a day’s riding and then headed back to Vancouver where a friend lined me up with a lifty job at Hemlock.

And if you’re there in summer, Whistler isn’t just an awesome place to ride snow. It’s also good for:

Resources and Useful Links for Riding at Whistler

Search for hotel deals in Whistler

Snow Forecast for Whistler (snow-forecast.com does exactly what it says on the tin, and is my usual go to for accurate snow forecasts)

Have you been riding at Whistler? What did you think? Are you a local who thinks I’m talking rubbish, or do you have a great tip to share? Does my information need updating? Leave a comment below and let us know.

This page contains affiliate links i.e. if you use them to make a purchase, 4corners7seas will receive a commission from them; this commission comes out of their profit margin at no extra cost to you. I’m linking to them because I know, use, and trust their products. If you’ve found this page helpful, please consider using my links; thank you in advance should you choose to do so