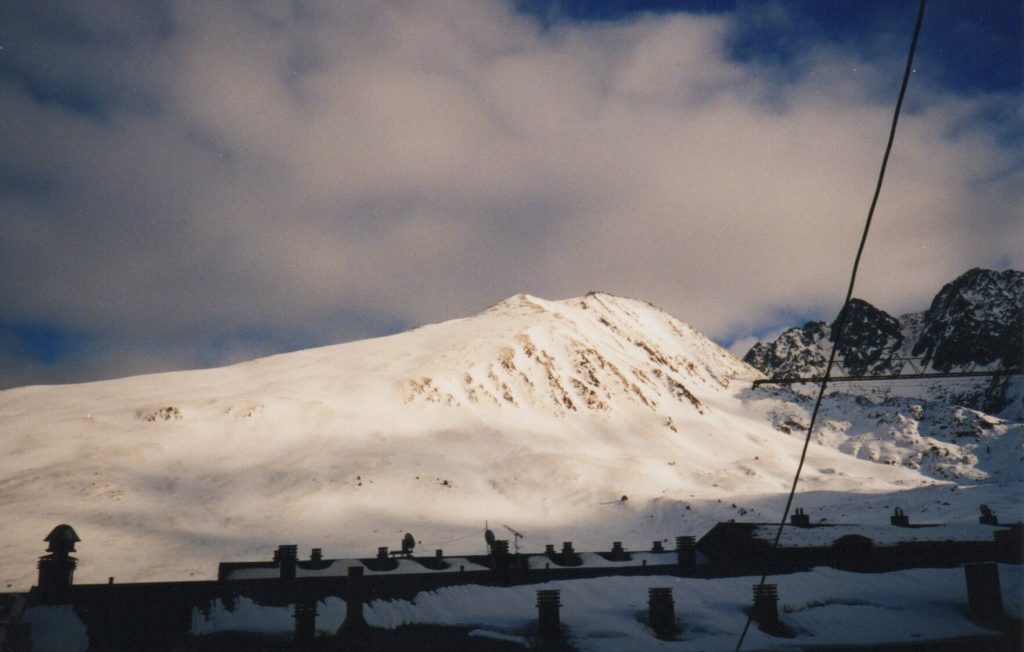 Pas de la Casa is a resort town in Andorra, a European microstate nestled in the Pyreneese mountains between France and Spain. Pas is part of the large Grandvalira ski area which covers a significant percentage of the entire surface area of Andorra, and which is known as a good place for beginners and intermediates while also being a more budget-friendly option than the beasts over in the Alps.

It’s hard for me to write a decent review of Pas de la Casa, as it was the first ski resort I ever went to. It has also grown a lot since then, with links to neighbouring resorts creating one big ski area called Grandvalira. As well as Pas de la Casa, you can stay in the quieter Soldeu/El Tarter in the next valley and have access to the same ski area. These days Grandvalira also has a few terrain parks and a half pipe, and several ‘freeride zones’ clearly marked on the piste maps i.e. in-bounds off-piste ungroomed areas which you are permitted to ride.

So it certainly offers more now than it did when I went, but anyway to me back then, with no experience and no riding ability, basically the entire mountain (apart from the baby slopes) seemed to be huge and composed entirely of expert terrain! By the end of the week, a couple of us had started doing red runs without mishap, though there was probably a certain amount of luck in that (and red runs in Andorra are easier than red runs in the Alps). Our first attempt at a red had come at the urging of a couple of Scottish lads we’d been drinking with in the hotel bar the night before; “C’mon, ye can do it!” they told us, before realising that we actually could not do it at all and then spending a good 45 minutes shepherding us down a fairly short run. Good riders are not necessarily good teachers!

On that note, Pas de la Casa is highly rated as a place to learn as the terrain isn’t too difficult and the ski school has a good reputation – we probably should’ve taken lessons! 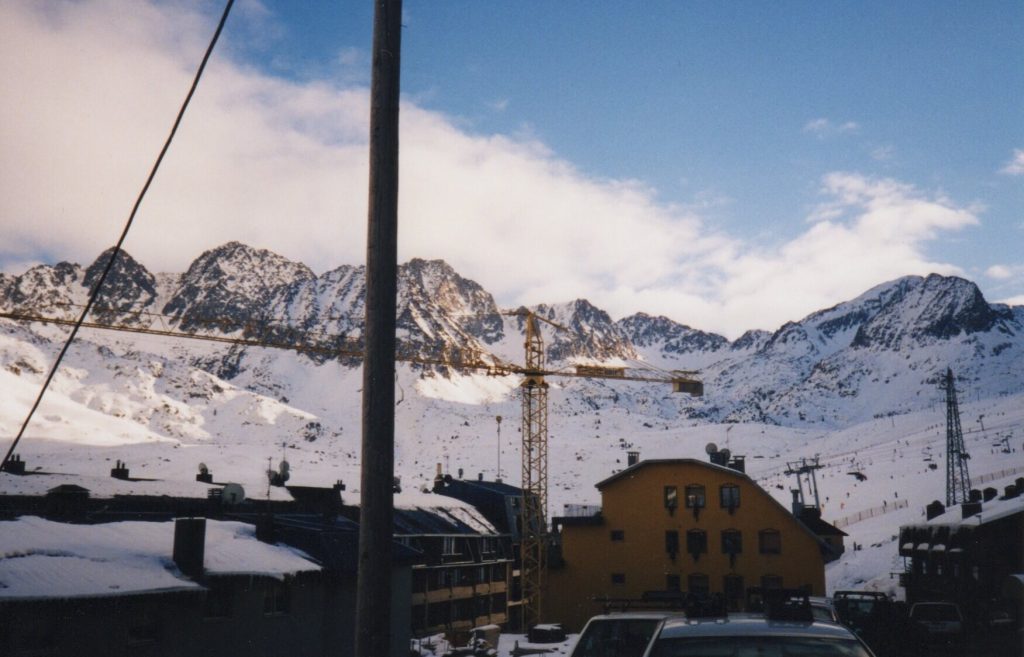 And another tip for beginners – which I’m sure most people really don’t need to hear – is don’t try snowboarding for the first time while you are drunk! After arriving in Pas we’d spent the first evening boozing on the dirt-cheap alcohol in the town’s bars, and decided it was time to have a cheeky little crack at snowboarding on the lower slopes… we hiked a short way up, but then struggled to even clip in to our bindings, never mind stand up (we were using the hotel’s rental boards, which were clip-ins). One member of our group became so frustrated with this that he gave his board a little kick, telling it to “just fuck off”… and fuck off it most certainly did, at great speed down the mountain to the bottom of the slope where it shot out under the fence and flew across the road below, never to be seen by any of us again. Of course this could have had serious consequences had someone happened to be standing there and not seen it coming, but thankfully no-one was there and no-one was hurt. The same cannot be said for my friend’s wallet, which soon felt the pain of replacing a rental board he had never even used! I guess the board was spirited away by a passer-by, perhaps just as an opportunistic theft but also perhaps to teach a lesson to the drunken morons on the slope… lesson learned… don’t drink and ride, kids.

So anyway, while I can’t give an expert’s personal assessment of the terrain and snow conditions, it does now offer a large ski area and is the highest and most snow-sure resort in the Pyrenees, and I can report that it was very cheap compared to the Alps. This is due to Andorra being a micro-state with very light taxes; the hotel was cheap, the food was cheap, the snow gear was (relatively) cheap, and the booze was so cheap that we were giggling in the supermarket when we realised what we were about to buy; bottles of 70% absinthe (a drink which was still unavailable in the UK at that time) were just a couple of pounds, a fact which led to one particularly messy evening when our resident snowboard-kicker passed out in a pile of frozen dog excrement… furthermore, the travel companies which offer cheap ski trips to Andorra have taken the allure of cheap liquor to Brits abroad into consideration, and arrange Club Med-style pub crawls in which the punters are made to play stupid games and the reps end up stood on the bar pouring tequila straight into the crowd’s eagerly upturned mouths… suffice to say, early morning chairlifts were not a priority that week.

Prices in Andorra these days are apparently rather higher than they used to be, but it’s still much cheaper than the resorts in the Alps; access is via Toulouse airport in France, involving a fairly lengthy bus transfer of around three hours (you could also take a bus from Barcelona but it’s further, so probably only useful if you’re already in Spain). So, is Andorra actually a good place to ski? Trying to assess it from memory, I think if I went there now I would rate it as a great value destination with a decent amount of not-so-challenging terrain; probably not the best for more advanced riders wanting to push themselves, but if you’re looking for a combination of low prices, a good place to learn to ski, or even just a piss-up in the snow, Pas de la Casa ticks all those boxes.

Resources and Useful Links for Riding at Grandvalira

Snow Forecast for Pas de la Casa (snow-forecast.com does exactly what it says on the tin, and is my usual go to for accurate snow forecasts)

Have you been riding in Andorra? What did you think? Are you a local who thinks I’m talking rubbish, or do you have a great tip to share? Leave a comment below and I’ll get back to you.

This page contains affiliate links i.e. if you use them to book accommodation or purchase travel insurance, 4corners7seas will receive a commission from them; this commission comes out of their profit margin at no extra cost to you. I’m linking to them because I know, use, and trust their products. If you’ve found this page helpful, please consider using my links; thank you in advance should you choose to do so!