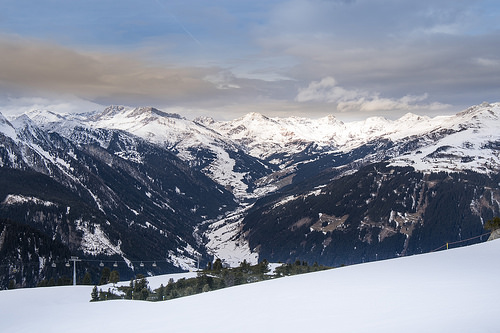 Mayrhofen is a moderately large ski town (by the standards of ski resort towns in the Alps) with a large ski area, which is in turn part of the enormous Zillertal (Ziller Valley) ski region. Located about a one-hour drive from Innsbruck (or you can take the train, with a change at Jenbach), Mayrhofen sits picturesquely at the head of the Ziller valley, surrounded by mountains on three sides. The town hosts the annual Snowbombing music festival, and has a reputation for being the best party town in the Austrian Alps as well as having one of the better ski areas. You can buy a combined ticket (Zillertal Superskipass) for the whole Ziller Valley (composed of four ski areas), or for each of the four areas separately.

(*this is the greatest vertical drop available for single runs, rather than overall. The highest and lowest points are located in different areas and not directly connected by skiable terrain)

There’s no on-snow accommodation in Mayrhofen; you stay in the town, which only sits at an altitude of 630m, and ride one of the various gondolas up to the ski area in the surrounding mountains. The skiing in the immediate vicinity of Mayrhofen is divided between two mountains, Ahorn and Penken. The main gondola, the Penkenbahn, is one of the most impressive feats of ski lift engineering I’ve personally seen (up there with Whistler’s Peak2Peak), and definitely the most hair-raising; it climbs from 630m at the base to 1,800m at the upper station, with only one support tower in the middle. This means that as you approach the middle tower and the upper station, there’s a very long drop below – don’t look down if you don’t have a head for heights! To make it worse, the thing actually changes direction at the middle tower and the gondola pod swings out as you go round the corner, which induces a particularly large volume of panicked screaming when the pod is downwards-bound and full to capacity; it always made me chuckle! The lift was included in this amusing Whitelines article ‘The Five Scariest Lifts in the World‘, but it has since been upgraded (from the 2015/16 ski season) and is now faster (so less of a bottleneck – the old lift was as notorious for queues as it was for fear factor!) and has much larger pods in place of the old standing-room-only boxes… I’m unsure whether that makes it any less scary, but at least you can now soil your ski pants in a little more comfort!

Anyway, once you’re safely up the Penkenbahn (hopefully..!) there’s a huge skiable area to explore which can keep you occupied for days. There are other gondolas coming up from different parts of the valley (all connected by shuttle bus), and also a gondola to the Ahorn ski area on the other side of town which isn’t physically connected to the Penken area, but covered on the same pass (Ahorn has the main nursery slopes, and also has a nice top-to-bottom run right down to the village which is popular with the local oldboys, who absolutely rip down it). Penken’s terrain park has a good reputation, and is certainly impressive; however, at the time I was there it was lacking a beginner park with small features for learning on. There was a half pipe, a ‘big’ park with huge features, and a ‘small’ park which was actually intermediate and still too advanced for those of us on our first seasons – these days though, the park is divided into six different areas according to difficulty, with something for everyone.

There’s plenty of terrain and some good spots for getting fresh tracks after a big dump, though with it being such a busy resort the powder gets tracked out pretty quickly; definitely get up early if you want some sweet fresh tracks on a pow day.

The Hintertux glacier is a 30-minute bus ride from Mayrhofen, and with a top lift station at 3,250m it has good snow and remains open year-round (as in, you can ski literally 365 days a year!). This gives you another large extra area to explore, though we never checked it out as it wasn’t included on our Mayrhofen passes and we were too broke to get a day-pass for it! (if you get the Zillertal Superskipass, it includes Hintertux; otherwise, you can just buy a day pass)

I was in Mayrhofen with my friend Alex with whom I was doing this ski season following our graduation from university… we’d initially gone to Innsbruck with a plan to get jobs and spend the season there, before deciding we’d be better off in a full-blown resort like Mayrhofen… but our job hunting efforts were extremely weak, generally taking the form of us waking up, looking out of the window, and saying “screw job hunting, let’s ride today and look for work tomorrow”. We kept that up pretty much the whole time we were there – traipsing around the village looking for jobs somehow couldn’t compete with going up the mountain for a day of riding! Although this meant we were both running low on money and decided to leave before the season was over, it was through riding every day for a few months in Mayrhofen that I lost my beginner’s jitters and became a somewhat competent rider. Alex flew home, while I took the scenic route; I purchased an Interrail ticket and took the train from Innsbruck to Geneva (a stunning journey through the Austrian Tyrol, the entire micro-state of Liechtenstein, and the full length of Switzerland with great views of the Walensee, Obersee, and Zurichsee lakes) to go visit my brother, who was spending that season in the French resort of Morzine

One of the bigger and better resorts I’ve been to, Mayrhofen is especially good for beginners (good ski school) and intermediates (plenty of terrain to explore and improve on), and for advanced riders who love park (but perhaps less so for advanced freeriders looking for a variety of gnarly terrain). It’s also a nice little town with a lively apres-ski scene and an annual dance music festival.

Resources and Useful Links for Riding at Mayrhofen

Search for hotel deals in Mayrhofen

Snow Forecast for Mayrhofen (snow-forecast.com does exactly what it says on the tin, and is my usual go to for accurate snow forecasts)

Have you been riding in Mayrhofen? What did you think? Are you a local who thinks I’m talking rubbish, or do you have a great tip to share? Does my information need updating? Leave a comment below and let us know.

This page contains affiliate links i.e. if you use them to book accommodation or purchase travel insurance, 4corners7seas will receive a commission; this comes out of their profit margin at no extra cost to you. I’m linking to them because I know, use, and trust their products. If you’ve found this page helpful, please consider using my links; thank you in advance should you choose to do so!