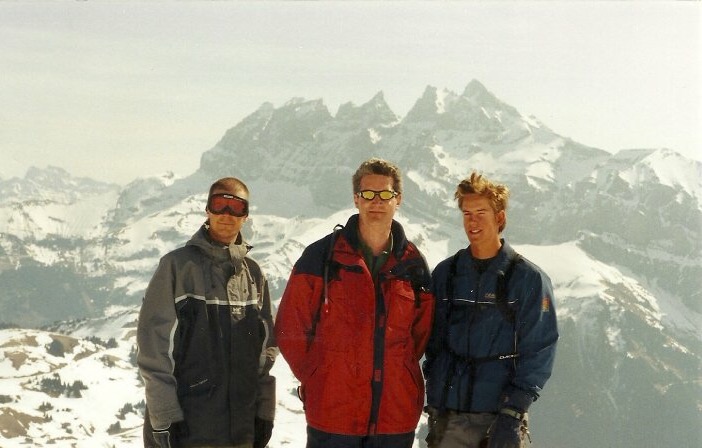 We’re standing in France, with Switzerland’s Dents du Midi behind us

Les Portes du Soleil is, by some measures, the largest ski area on the planet. It’s definitely the largest one I’ve experienced, and is larger than anything outside Europe – its only rivals to the title are Paradiski (Les Arcs) and the 3 Valleys (both in France), depending how one chooses to define ‘largest’ (i.e. using total surface area, total skiable area, or total distance of the combined length of a resort’s runs)

Les Portes du Soleil straddles the border of France and Switzerland – it was created through the merger of around a dozen French and Swiss resorts, each of which was already a fair size in its own right. The ski area encompasses multiple towns in both countries, any of which can be used as a base for skiing in the area. One of these towns is Morzine, on the French side, and at the end of my season in Austria I bought an Interrail ticket and took the train across Austria, Liechtenstein, and Switzerland to France to visit my brother, who’d spent the season in Morzine. I’d thought Mayrhofen was big, but it’s dwarfed by the Portes du Soleil. Our parents and sister also timed a visit for the same week, with them staying in a swanky lodge while I bunked down on my brother’s floor!

(*this is the greatest vertical drop available for a single run, rather than for the ski area overall. The highest and lowest points are located in different areas and cannot be done as a single top-to-bottom run)

In the five days we spent skiing in the area, we mostly stuck to the Morzine / Avoriaz section and that kept us well occupied for four days. On the other day, we rode over the border into the Champery zone on the Swiss side. This ski area really is truly massive; you can spend the whole day skiing across it from one side to the other, and then loop around and take a different route all the way back.

The border itself is great – one of the ‘crossings’ was simply a little wooden hut, with a sign saying ‘border’, stuck on top of a mountain ridge with a chairlift coming up from either side. No guards, no passports, you just come off the lift and ski off down the other side, and hey you’ve switched countries! The most famous route from France into Switzerland is via the run named La Chavanette, or in English simply ‘The Wall’; don’t be thinking Pink Floyd, but rather a steep, icy slope completely peppered with car-sized moguls. Not for the faint-hearted (or those still on their first seasons); we went the other way. But I’d love to go back there and have a crack at it. 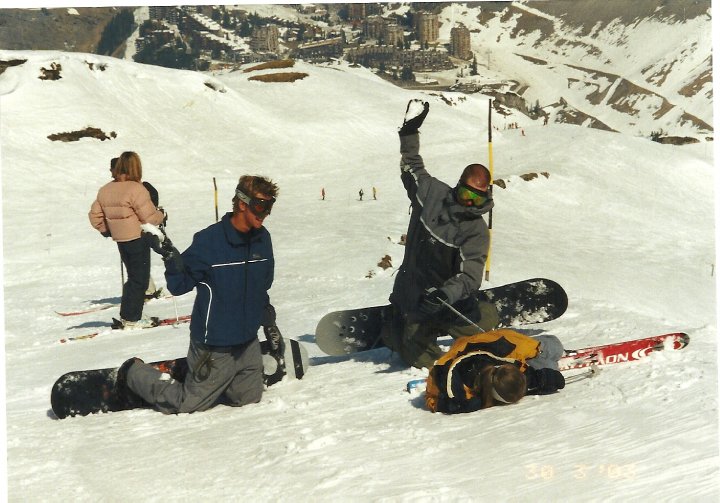 Brotherly love! The resort below is Avoriaz

This being my first season I also hadn’t really started riding park yet (especially wth Mayrhofen not having a baby park at the time), but my brother’s a far better rider than I and a bit of a park monkey, so I did have a good look at some of the parks in Portes du Soleil while he hit the booters. We had a look at the beginner park & intermediate park in Morzine, and a monster park in Champery (I think?!) with the biggest table top I’ve ever seen (the conditions weren’t good and no-one was touching the big stuff that day). As for the eight or nine other zones that constitute the Portes du Soleil – I never even saw them, and they’re home to several more parks. So it’s safe to say there’s plenty of freestyle action to be had, along with the hundreds of miles of piste.

Basically, you could ride here for weeks without getting bored of the same old runs. There are seven parks, three pipes, four boarder cross courses, and every type of terrain you could ask for. There is a downside though, which is that it’s all so spread out – unlike Whistler, which has all of the above packed in to a relatively compact area, skiing at Portes du Soleil can involve a lot of chairlifts and boring runs to get across to the bits you want to ride. Also, despite the enormous size of the ski area, it’s fairly low-lying (for the Alps) and doesn’t have the kind of one-run vertical drop available in places like Chamonix, Revelstoke, Whistler, and so on. Although the vert is still decent, it doesn’t match the overall size. With that said, it’s an awesome ski area, and Morzine is a nice little French Alpine town with good accommodation, facilities, restaurants, bars and clubs… Avoriaz, the town perched at the top of the cliffs above Morzine, is more of a purpose-built resort with little to no charm, but there you can ski in & out instead of coming up from Morzine via a series of lifts and runs. As for the other dozen or so towns in and around Les Portes du Soleil… again, I never even saw them!

At the end of the week, my parents and sister headed back to England (lugging my snowboard and gear with them!), and having thus lightened my load I used the remaining time on my Interrail ticket to take the scenic route home.

This isn’t really a comprehensive review of the Portes du Soleil, because with only having done five days’ riding there it’s impossible to be comprehensive; it really is that large that I only saw a portion of it. Suffice to say that I was massively impressed with the enormous size, the range of terrain, and the plethora of freestyle options available on the mountain; the scenery is awesome (especially views of the Dents du Midi, with Mont Blanc also visible in the distance); and Morzine is a cool little Alpine town. This is the largest ski area in the world (depending how you measure them), and highly recommended.

Search for hotel deals on the French side in Morzine/Les Gets or up in Avoriaz, and on the Swiss side in Champery

Snow Forecast for Avoriaz (snow-forecast.com does exactly what it says on the tin, and is my usual go to for accurate snow forecasts)

Have you been riding in Morzine / Avoriaz? What did you think? Are you a local who thinks I’m talking rubbish, or do you have a great tip to share? Does my information need updating? Leave a comment below and let us know.

This page contains affiliate links i.e. if you use them to book accommodation or purchase travel insurance, 4corners7seas will receive a commission; this comes out of their profit margin at no extra cost to you. I’m linking to them because I know, use, and trust their products. If you’ve found this page helpful, please consider using my links; thank you in advance should you choose to do so!