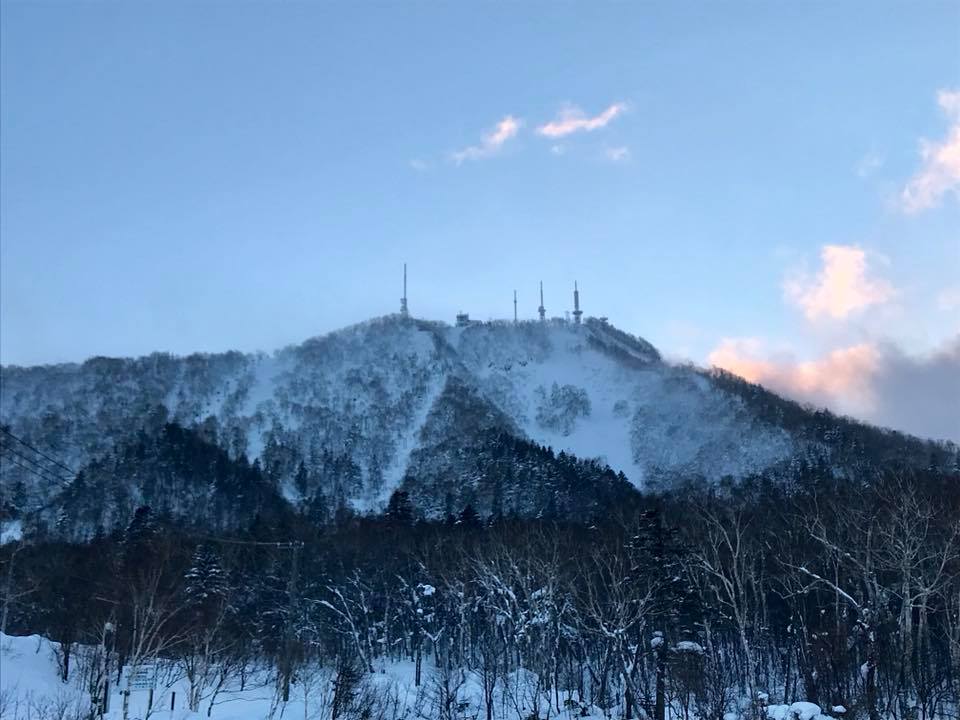 Man, I love Teine… the island of Hokkaido is legendary for the quality and quantity of its powder, and powder hounds flock to the resorts of Niseko, Rusutsu and Furano. But just outside Sapporo is the hidden gem of Teine – a small, unglamorous local hill which despite being the venue for the 1972 Olympic downhill events has very little international reputation, but which just happens to consistently have the best in-bounds powder skiing I’ve ever experienced. Every time you go you get steep & deep freshies all day, and I don’t know any other place where that’s the case (Rusutsu comes close, but Teine has the steeper terrain)

(* this is the max vertical drop available for a single run; not necessarily the same as the difference between the highest and lowest points, as they are not directly connected by skiable terrain)

Sapporo Teine ( 手稲 ) is divided into two areas, Teine Highland (higher up) and Teine Olympia (lower down, where the Olympic cauldron still stands). While there is a run connecting them, it’s a cat track, and once you’re in the Olympia area you have to take the gondola back up to Highland. Olympia is better for learners, but if you’re at Teine for the powder you want to focus on Highland and don’t waste time at Olympia (the base area & ticket office are at Highland, which is the final stop for the bus – don’t get off too early as I did on my first visit. I asked a staff member where the ticket office was and he ended up giving me a ride up to Highland, which was nice of him)

The vertical drop for the whole ski area is around 700m, but this includes Olympia – the top to bottom vertical drop for Highland alone is more like 500m, and with it being a pretty steep gradient the runs don’t take long. But when you’re blasting through the trees and up to your arse in powder with a massive grin on your chops, who cares? The lift lines are never long (in fact there usually aren’t any) and the lifts are fast, so you can just keep lapping the trees and enjoying run after run of deep, dry, beautiful powder. There’s a decent terrain park set up too, but honestly who hits the park when there’s so much pow begging to be ridden?!

Here’s my brother modelling the Teine powder on a recent visit: 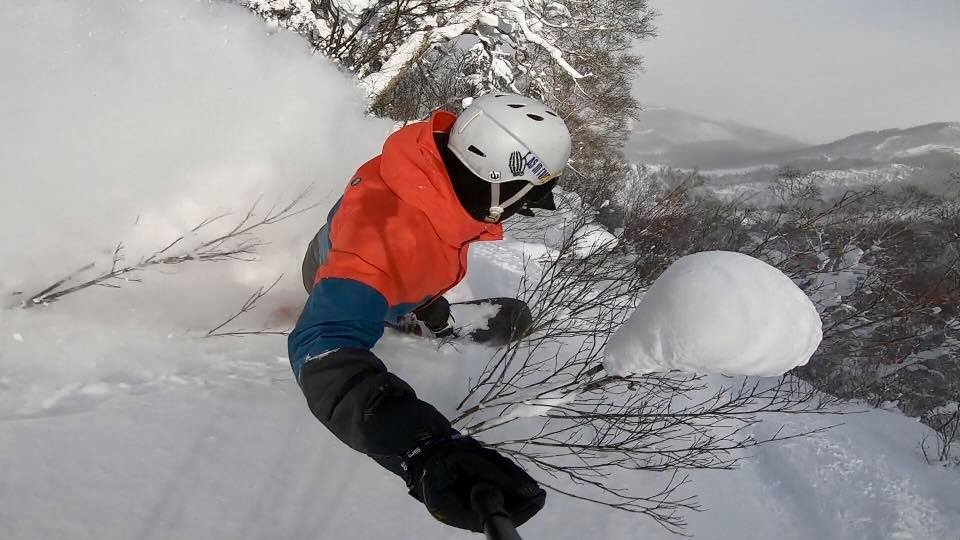 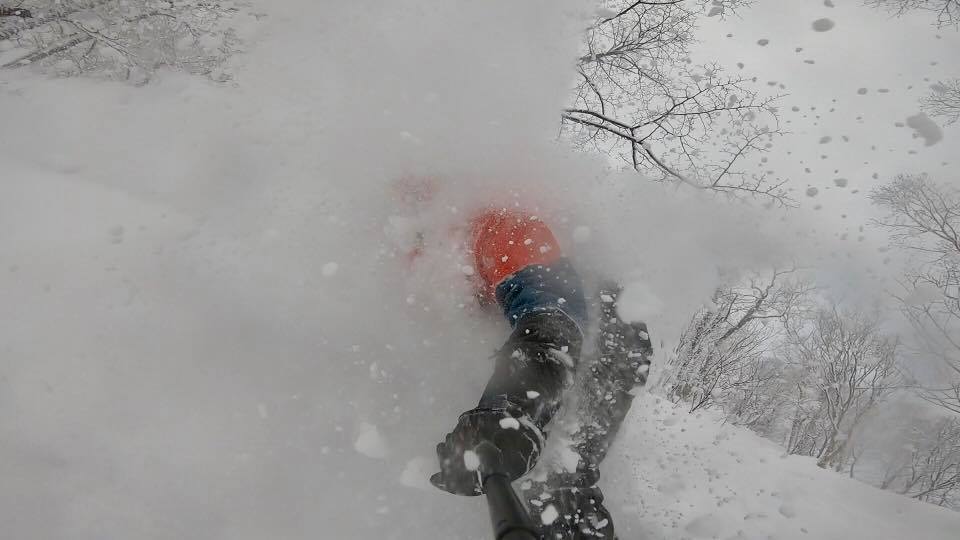 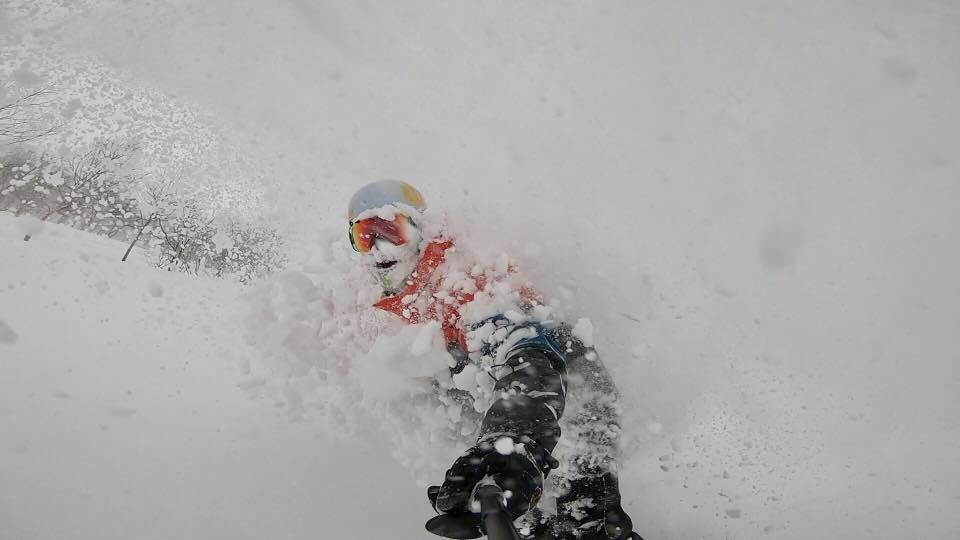 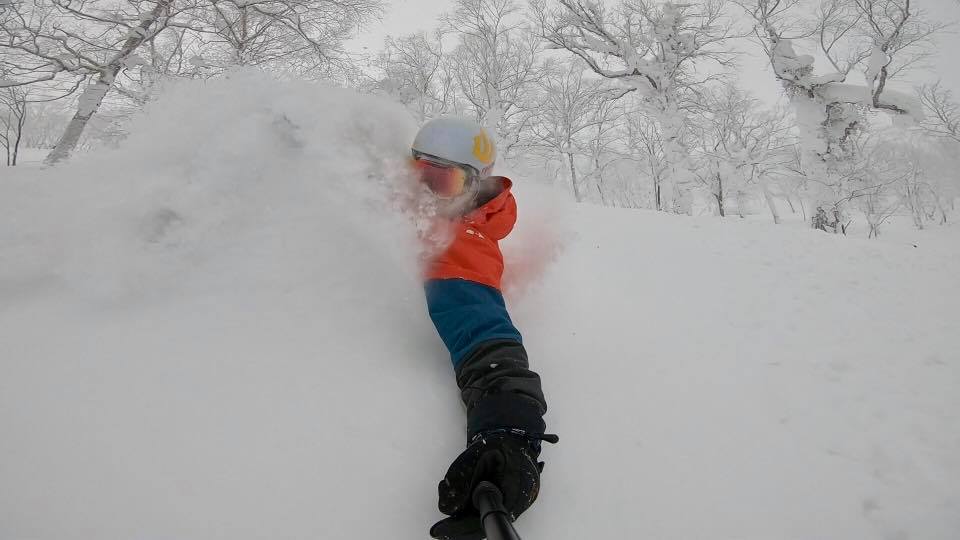 When I spent a winter in Sapporo, the old summit cable car was still running; unfortunately, by the time of my subsequent visit it had been taken out of service leaving just the Summit Express chairlift. While the chairlift is nice and fast, the loss of the cable car means that the sweetest spot on the mountain now requires a hike from the upper chairlift station. It’s still definitely worth doing once or twice per visit, but you’ll get far more laps in by mostly hitting the trees off the side of the piste below the summit chairlift. You’ll also see on the piste map there are a couple of pink-shaded areas of trees – these are what they call ‘nature zones’, where off-piste riding is officially permitted. Aside from these ‘nature zones’, the other off-piste areas are not officially open for riding, though I’ve never experienced or even heard of Teine’s ski patrol taking any action over people going off-piste; they generally turn a blind eye, and it’s pretty obvious that people go in there. The best treasure-trove of powder, apart from the old cable car area, is the section of trees to skier’s left of the ‘Women’s Giant Slalom’ (女子大回転) run (named for the Olympic event).

In order to hit the area that the old cable car accessed, you’ll need to hike across from the top of the chairlift, taking a right (i.e. skier’s left) and walking over to the big TV masts. The snow will likely be very deep, but there is a cat track you can walk on – just find the skull and crossbones DANGER signs and walk past them like a boss (…although maybe try not to be too blatant about it, as it’s just behind the ski patrol hut). 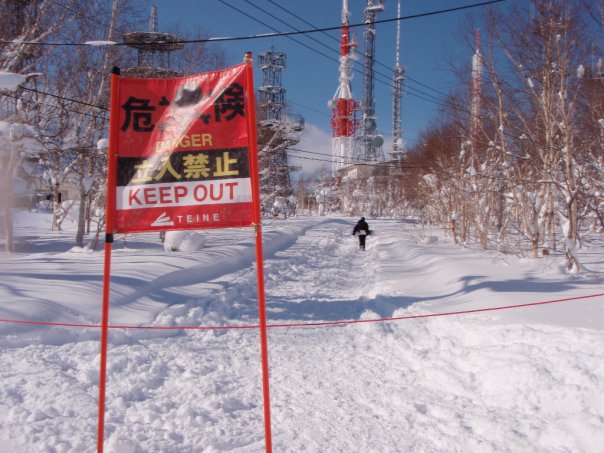 Once you reach the TV towers, strap in, drop in, and enjoy a short but oh-so-sweet blast through the steep and deep powder field below you – just make sure that you get over to your right once you’re down to the trees and that you take the cat track heading right, over to the old cable car lift line (the lower portion of which is now officially a run) as that’s your ski out. If you miss that, unstrap and trudge back up to it – don’t try and keep riding down in the hope you can eventually ride down to Olympia. I know from experience that you can’t, and it was a long and extremely exhausting hike out to the road through waste deep snow. Thankfully it was a clear and sunny day – riding alone as I was that day, I’d have been in a tricky spot if the weather had turned nasty.

How to get to Sapporo Teine

Access is easy from Sapporo station – just take the JR train to Teine station (15 mins) and then there’s a JR bus (bus number 70) up the hill from there – wait for the bus in front of Mister Donuts outside the south exit. The bus takes about 20 minutes, and goes at 9.10, 10.15, 11.30 (these things change, so obviously double-check this) plus a few afternoon departures (but go in the morning – while there is night skiing at Teine, it doesn’t cover the good bits). The bus is around 400 yen, but the tourist information centre in Sapporo Station (north-west corner of the main concourse) sells a combo train, bus, and ski lift ticket which is significantly cheaper than paying for them separately. As always for Japanese trains, check Hyperdia for train times (there’s a good explanation here for how to use it)

In short, Teine is one of my favourite mountains anywhere. The ski area may be small, but the off-piste tree skiing is epic and the snow is pure fantasy wet dream stuff (in terms of both quality and quantity), and doesn’t get tracked out like it does at busier hills. I had an awesome day basically every single time I went there, the lone exception being an early-season December visit before they’d had enough snow.

There’s no accommodation at Teine though – it’s a local hill for Sapporo city – and most ski holiday visitors to Hokkaido are probably going to prefer to stay on-mountain in Niseko, which makes sense. But if you’re heading to Niseko and fancy a couple of nights in Sapporo en route, Teine is well worth hitting and may well be a better day’s riding than you score at Niseko; and if you’re visiting or living in Sapporo, then Teine is definitely the best choice for your regular riding. Oh, and the view from the top of Sapporo city and Ishikari Bay isn’t bad either.

Resources and Useful Links for Riding at Teine

Check out my quick guide to Sapporo

Search for hotel deals in Sapporo

Airbnb is another good option in Japan, if you’ve never used it you can get a 30 dollar discount by signing up here

Travel insurance with snow sports cover from World Nomads. Their flexible insurance can be bought even if you’re already in Japan – I once found out the hard way (in Thailand) how important this can be!

Snow Forecast for Teine (snow-forecast.com does exactly what it says on the tin – my go to for accurate snow forecasts)

Click the banner to pre-order a JR Pass for a 40-dollar saving (read more on whether you should get a JR Pass):

Have you been to Sapporo Teine? What did you think? Does my information need updating? Do you have any questions about skiing in Hokkaido? Leave a comment below and I’ll get back to you.

This page contains affiliate links i.e. if you use them to book accommodation or purchase travel insurance, 4corners7seas will receive a commission from them; this comes out of their profit margin at no extra cost to you. I’m linking to them because I know, use, and trust their products. If you’ve found this page helpful, please consider using my links; thank you in advance should you choose to do so!