“So, why did you go overland?”

We were in a roadside restaurant shack on the Lao side of the border, having just crossed over from China’s Yunnan province. I was sitting with Lulu and Pablo, a friendly Chinese – Chilean couple from Shanghai who’d also boarded the bus before dawn that morning in Xishuangbanna with the aim of reaching Chiang Rai by evening; I’d just run off to the ATM to withdraw some Laotian kip (which I didn’t need – as it turned out, Chinese yuan and Thai baht would have sufficed for the day), and now over plates of fried rice we were discussing our travels and whether we would make the Mekong in time for the last bus over to Thailand.

Beads of sweat trickled down my back in the midday heat, and as the flies pestered us I thought the question over for a second – she clearly meant ‘why did you go overland, today, from China to Thailand?’, and not “why do you go overland?”… in their case, they’d been exploring Xishuangbanna and staying with a hill tribe in the jungle, and simply didn’t want to backtrack all the way north to Kunming to then fly south to Thailand. But in my case, I’d just come overland from Kunming – in fact, I’d come overland all the way from Tokyo (having quit my job there), via Hokkaido, Korea, China, Taiwan, and China again, and was now aiming for Thailand after my attempt to visit Tibet ended in frustration… so I thought the question over for a moment, and considered how long and rambling my answer might get, before replying simply, “well, I just felt like it”.

While that answer was essentially true, it was also a bit of a cop-out, or the very short version anyway; but I’d just met these guys and it didn’t seem the time and place to start chewing their ears off about why I usually prefer to travel overland.

So I left it at that, and our conversation turned back to our recent travels, where we were heading in Thailand, and the awful toilets downstairs, and a short time later we re-boarded the bus and drove on through the verdant rolling beauty of northern Laos; and that evening, thanks to the new bridge over the Mekong, we did make it over the border and all the way to Chiang Rai, tired but victorious.

But if I had let rip with a full explanation of why I prefer to go overland, it would have gone a little something like this:

First of all, I’m a map geek. As a kid I loved drawing treasure maps, and I loved Tolkien’s maps of Middle Earth; I love the big old atlases that you plonk down on the table, and after looking up whatever you were looking up they don’t let you go and you end up poring over all these random places; and these days of course I love zooming around the world on Google Maps. Zooming in on the lines representing in two dimensions the coastlines and mountain ranges, the rivers and lakes, the physical parameters that define our world in three dimensions; zooming in on the lines representing the international borders between nations, those man-made parameters that define the man-made nations that define our world in the human dimension. Some of them are where they are precisely because they run along the spine of a mighty range or the middle of some great river, some actual physical barrier; some of them really are just imaginary lines, perhaps only demarcated by a few border markers here and there and easily crossed; while others are heavily fortified, impassable, the realms of mistrust and barbed wire and minefields and gun turrets and soldiers eyeing each other suspiciously across arbitrary lines some arseholes drew up decades before with their carving knives. Those lines on the map make you wonder, what does it actually look like there? Why does this country stop here and this other one start there? Is it a place where rival historical powers ran up against each other, perhaps fought over where the line should be? Is it a place where markedly different cultures developed on opposite sides of some towering mountain range and crossed the passes to trade, or a place where ideas, people and troops have flowed readily back and forth down the ages?

I look at all this represented in two dimensional lines on maps, and I want to go there and physically see and experience how this world of ours physically fits together, how it works, what it looks like, what the people are like. And I zoom in here and there and wonder, can you take a boat from this island to that one? At what points can you cross those mountains? Would it be possible to go by train from there all the way to there? That road must be insane, wonder what it’s like? And then I want to go there to travel through it and see it all in the flesh. Flying is an amazing thing, but there’s so much you miss that way and as they say it’s about the journey, not just the destination, and I wholeheartedly agree. So I wanted to get out there and cross all those lines on the map, to visit the four corners and the seven seas, and now I’m writing this blog to provide useful information to others who like to do the same, inspiration to those who want to, and hopefully entertainment to anyone else who should stumble upon it (plus a healthy dose of snowboarding, my other main addiction). 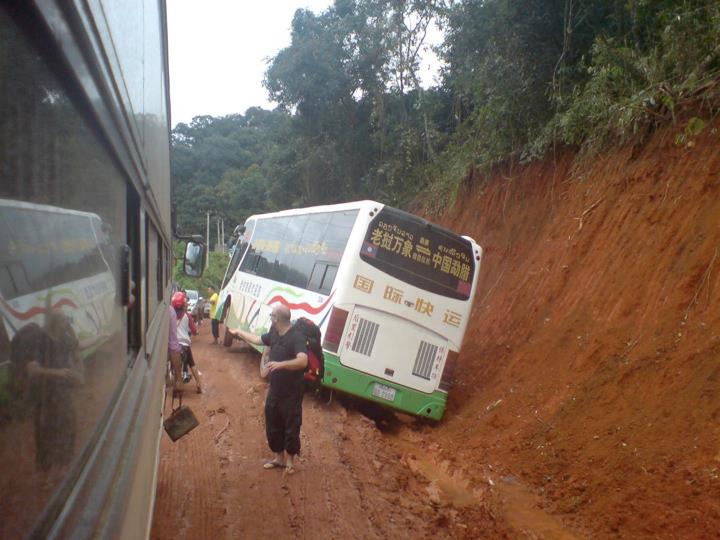 Sure, you’ll have a lovely time in Luang Nam Tha and Luang Prabang; but what’s it going to be like getting from one to the other? Well, a guidebook will tell you it’s usually eight hours and will probably mention that it’s a bad road and could take longer during rainy season; I’m here to tell you that it’s going to be a very long and gruelling bus ride of eight hours if you’re lucky, maybe twelve on a bad day, with the bus slipping and sliding in the red mud, perhaps getting stuck at a mudslide and towed across by a JCB, or passing another bus stuck in the ditch and picking up its stranded passengers. That particular road is dreadful; and yet, while enduring it, you’ll be treated to breathtaking views of the jungle-clad mountains of Laos, ridge after ridge stretching away into the purple distance; you’ll see grinning kids rolling around in the mud waiting for the wheels of the passing buses to splash them with water, cheering and waving; you’ll see the shacks of the humble villages in which the majority of Laotians live… in short, you’ll see what most of Laos is actually like.

Or consider Angkor Wat; it’s amazing, one of the most amazing places you’ll ever visit, but most of Cambodia isn’t Angkor Wat; it’s the fields and villages you see through the bus window, the little towns where you make rest stops and have a fried tarantula for breakfast… 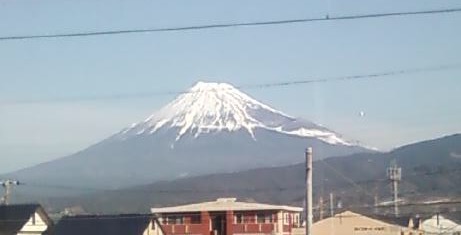 Or ride the bullet train from Tokyo to Kyoto or Yuzawa – you won’t get any 10-hour bus-ride-from-hell war stories or mudslide tales, but train travel is deeply woven into the essence of modern Japan and to miss watching her cities and rivers and rice fields and mountains (including the view of elusive Mt Fuji, if you’re lucky) sliding smoothly past the window would be to miss a great travel experience and a great snapshot of who and what Japan is.

And there’s no more wistful way to leave a country than by ship, watching her slipping slowly over the horizon as you steam away; and no more exhilarating way to first see new lands than the cliffs and towns of a rugged coastline looming ahead, first arriving not in the sterile confines of an international airport, but in the nitty and hustle and gritty and bustle of an international seaport.

Had I flown to Vietnam from Laos, I would never have experienced this crazy 2-day adventure featuring landslides, fireflies over the moonlit paddies, a motorbike accident, and a couple of stolen passports, and I wouldn’t have forged lifelong friendships in the fires of that intense journey. A flight would’ve been easier; but easier isn’t always the point.

And the Trans-Siberian railway is surely a more rewarding way to cross Europe to Asia than flying; perhaps not every time you make the journey of course (once is probably enough for most!), but if you only ever fly over all that land, how do you really know that Russia does indeed stretch from the Baltic to the Pacific like the map says it does?

Sometimes, of course, it does make sense to fly; if time is of the essence, if there’s a border in the way that presents visa problems, if you just really can’t be bothered with a series of long bus or train rides, or if there’s simply a great big ocean in the way, then planes are a handy solution. And despite my desire to go overland and see how the world’s put together, I do have to admit that if I’ve done a particular journey before and I know it’s a tough one, doing it again doesn’t always appeal so much. For example, a few months before writing this, I did the ferry & minibus run from Ko Pha Ngan (Thailand) to Penang (Malaysia) and copped a stinker of a minibus – with every seat full, completely jam-packed with luggage (two families with kids were on board), and the air conditioner out of order, it was an absolute sweat box… a flight straight to Kuala Lumpur would’ve been so much easier. There was nothing good, nothing at all, about that day’s journey. It was long and uncomfortable and exhausting. And I’d done the route before, so crossing the border was nothing new, the scenery was nothing new or interesting. No way around it; it sucked. Overland travel sometimes does. But overland travel, for me, is the soul of travel, and is always my preference when I’m in a new country, or a new part of a country, or crossing a border I haven’t yet crossed. Though I will admit to also loving the view from a plane window, I really want to be down there seeing the lay of the land from ground level, to see and cross the famous mountain ranges and rivers; to meet the people and hear their languages, and to see them and their crops, their buildings and clothing and customs changing with the land.

That is why I go overland.