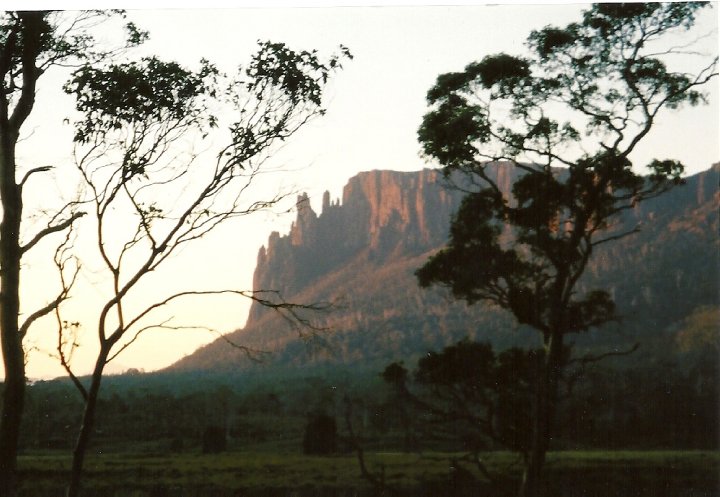 The Overland Track is a multi-day trek through Tasmania’s Cradle Mountain – Lake St. Clair National Park, which I walked with a couple of visiting hometown friends (my frequent travel companions Mike & Ross) towards the end of my time in Australia following a ski season in Thredbo. It’s a 65km trail which is usually done in five days, but we did double legs on the middle and latter days to make it a 3-day job (my companions were pressed for time, squeezing in as much as they could on a one-month round the world trip). Once you reach Lake St. Clair there’s a ferry to the visitor centre at the far end of the lake, or an optional extra day’s hiking around the lake. We took the ferry!

It’s a cracking walk, with each section taking you through completely different scenery – the terrain on the first day is mountainous as you round Cradle Mountain, and then the middle part is mostly crossing alpine grasslands (which I thought almost looked like Africa – not that I’ve been to Africa!), before a final section of forest trails. We also had the good fortune to see a tiger snake up close, and the even better fortune that it didn’t bite Mike as he almost stepped on it.

Where to sleep on the the Overland Track

There are a series of maintained huts along the route providing dormitory beds and with campgrounds outside. It’s first come, first served and you have to carry a tent in case the huts are full when you arrive. We didn’t even attempt to score beds and elected to camp both nights as a matter of preference. Doing the trail from north to south in the usual five days, you would overnight at Waterfall Valley Hut, Windermere Hut, New Pelion Hut, and Kia Ora Hut; then if doing the optional walk around the lake you would also spend a night at Narcissus Hut (where the ferry jetty is located).

On the first day we walked a single leg as we had to travel from Launceston in the morning and didn’t have time for any more, meaning we camped at Waterfall Valley Hut. Then on the second day we covered two legs to reach New Pelion Hut, and on the third day we walked two legs to Narcissus Hut and made it in time for the last ferry of the day – just as the heavens opened following three days of perfect hiking weather – and were gorging ourselves on Hobart seafood a couple of hours later! I was happy enough doing the long days that we did and covering the distance in three days, but of course it would be a good idea to take five days and go at a more relaxed pace, unless you fancy a tough walk. There are also a number of interesting-looking side trails, including to the summit of Cradle Mountain near the start and a number of peaks within reach of New Pelion Hut in the middle, so you could even turn it into a one-week affair. The Overland Track and its side-trails certainly justify taking however much time you’re able to take.

Transportation for the Overland Track

In terms of transportation and other practicalities, unless you’re doing it in winter it’s compulsory to do the Overland Track from north to south, meaning you must first travel to Launceston. From there you can take a bus to the park visitor centre (where you have to register and pay the entry fees), and then from there there’s a shuttle bus to the trailhead. There are no waste disposal facilities on the trail and you must carry out all that you carry in, so be a bit smarter than we were and don’t carry any canned food – empty sweet corn tins become a real chore to carry. Gas camping stoves are forbidden so you have to take a (liquid) fuel stove with you if you want to make hot food and drinks. We visited an outdoor shop in Launceston where we rented our tents and a stove (and whatever else we didn’t already have), and they also arranged our bus tickets and we made use of their baggage-forwarding service. This is definitely worth doing, as you can send ahead everything you don’t need for the trail and pick it up in Hobart after you’ve finished the trek, meaning you can continue straight on to Hobart from the end of the trail instead of having to backtrack to Launceston.

We were lucky with the weather and it only rained just as we were waiting for the ferry, but you definitely need to be prepared for all kinds of weather. The Tasmania Parks & Wildlife Service’s Overland Track page has all the information in greater (and more up-to-date) detail than I’m giving here, so do take the time to read it and heed the safety warnings – and make sure you’re up to date on snake bite first aid! I remember them giving us an A4 sheet at the start of the trek describing the three types of snake found in Tasmania – the white-lipped snake (not so venomous), the lowland copperhead (dangerously venomous), and the tiger snake (extremely venomous!) – and what to do in the event of a snake bite. I recall reading that sheet and thinking that we almost certainly wouldn’t see a snake anyway. But on the third day of the hike, I was walking immediately behind Mike along a narrow trail as we were carrying on a conversation, with Ross a short distance behind us… and as Mike rounded a bend in the path, he froze in place with one foot up in the air, a huge black snake coiled up right there on the path in front of him. I didn’t see it straight away and bumped into Mike’s back, knocking him forward just as the snake bolted off into the bush, his foot coming down right in the spot where it had just been snoozing! Of course, the vast majority of snakes are never intentionally aggressive and only strike when surprised or left with no other choice… but if Mike had been a little less alert, or the snake had been a little slower to bolt, it would’ve been surprised all right, as he’d have trodden on it! So there’s probably a pretty high likelihood that he’d have been bitten. Given the distance from there to the nearest hut (I think it was a good 3-hour walk, so probably a good hour’s run) he’d have been in serious trouble in that event – and the huts don’t have medical facilities and anti-venom anyway, so there’d have been further delay while waiting for evacuation (by helicopter?)… in short, it would definitely have been a touch-and-go emergency situation. Thankfully that didn’t happen, and instead we just gawped at this enormous black snake as it thumped away through the undergrowth – moving at speed, its body was only making contact at the points where it was sidewinding off the ground, with most of the snake actually just in the air as it moved side to side – with each twist as it pushed against the earth, it made an audible thudding sound. The thing was huge! According to the Tasmania Parks & Wildlife Service snake page they measure from 1m to 1.8m when fully grown, and this one was at the upper end of that range. It was also really solidly built, and by far the largest wild snake I’ve ever seen. But it was really a beautiful creature, a shiny jet black from tip to tail, and I’m glad we encountered it without anyone (man or snake) getting hurt.

Have you done the Overland Track? How was it? Any questions? Leave a comment below and I’ll get back to you.

If Tasmania isn’t on your itinerary you could hike up Australia’s highest peak near Thredbo in the Snowy Mountains, Mt Kosciusko. See my Australia overland travel page here, and more Australia posts here.

Search and book accommodation in Launceston (we stayed at Launceston Backpackers, which was decent – spacious, with a garden and a beatup old upright piano in the common room you can tinkle) & Hobart (we stayed at Hobart Central YHA, which was exactly what you’d expect – cheap, no frills, clean, central location, did the job).

Airbnb’s also a good option, if you’ve never used it before you can get a 30 dollar discount if you sign up with this link

Make sure you have a good insurance policy – World Nomads offer flexible travel insurance you can buy even if already overseas (most travel insurance companies won’t cover you if you’ve already left your country, and this can be a crucial point as I once found out the hard way in Thailand)