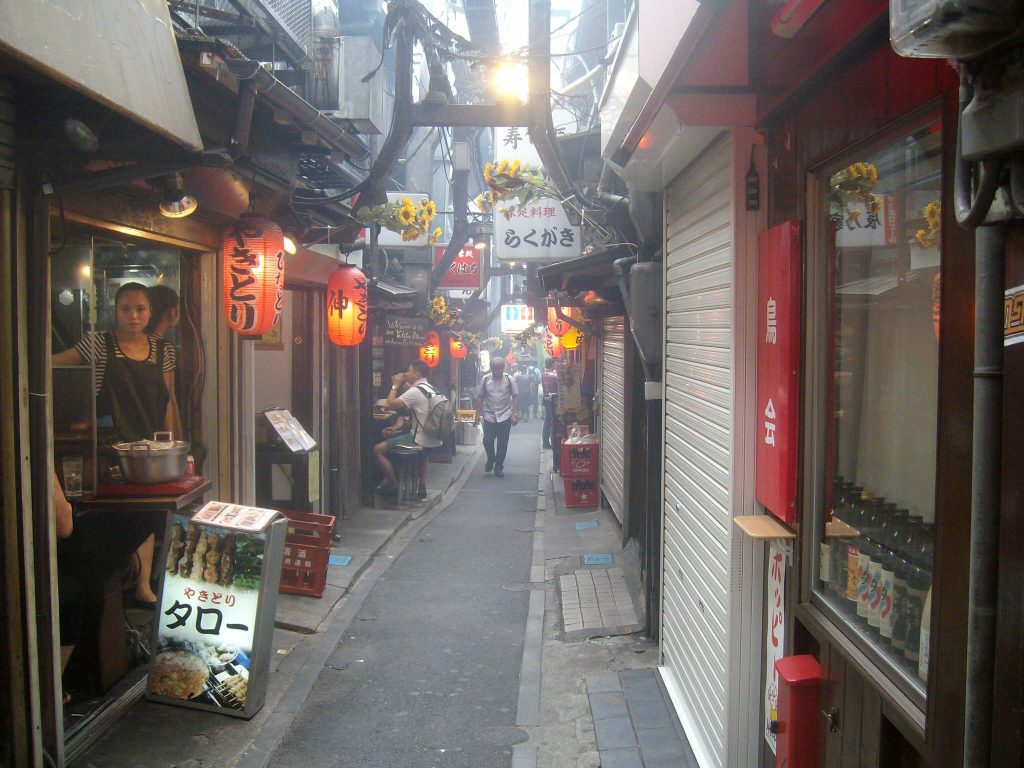 If you’re a fan of sci-fi noir such as Blade Runner or Ghost In The Shell, you’re in Tokyo, and you’re looking to scratch your cyberpunk itch in the neon-lit alleyways with their pokey little bars filling in the cracks between the city’s skyscrapers and infrastructure, Omoide Yokocho is what you’re looking for. 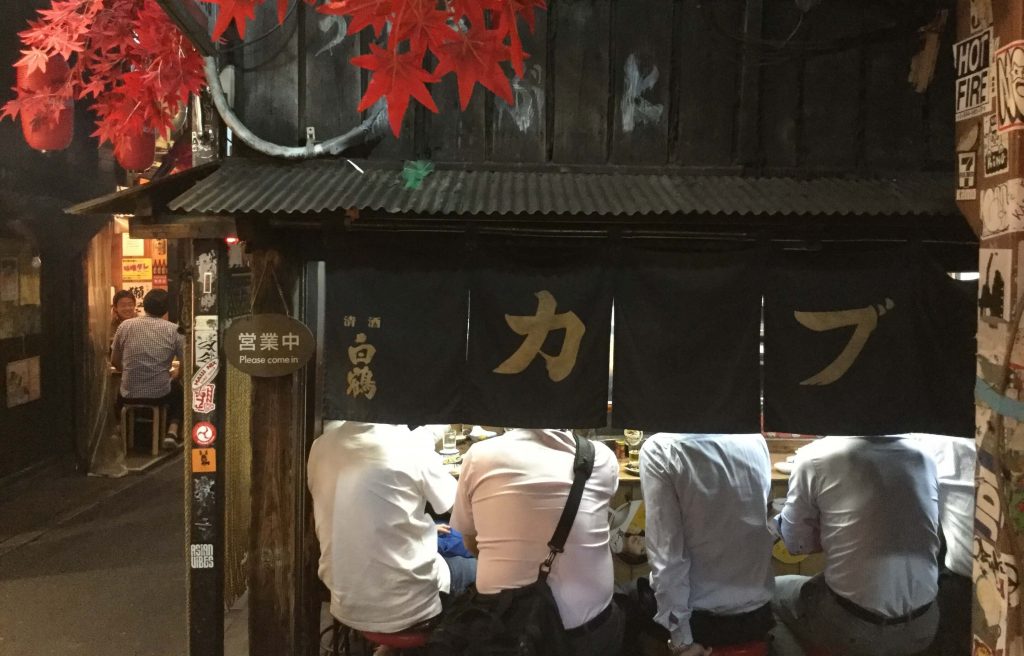 Tokyo was bombed almost flat in the closing stages of World War II, and the area around Shinjuku Station was levelled. Omoide Yokocho (思い出横丁, Memory Alley, though more commonly referred to as Shomben Yokocho (小便横丁) – Piss Alley!) originally sprang up as a collection of motsu (grilled animal intestines – most other foods were strictly rationed in those sparse years) eateries and drinking holes to serve the impoverished post-war workers passing through the city’s busiest hub. 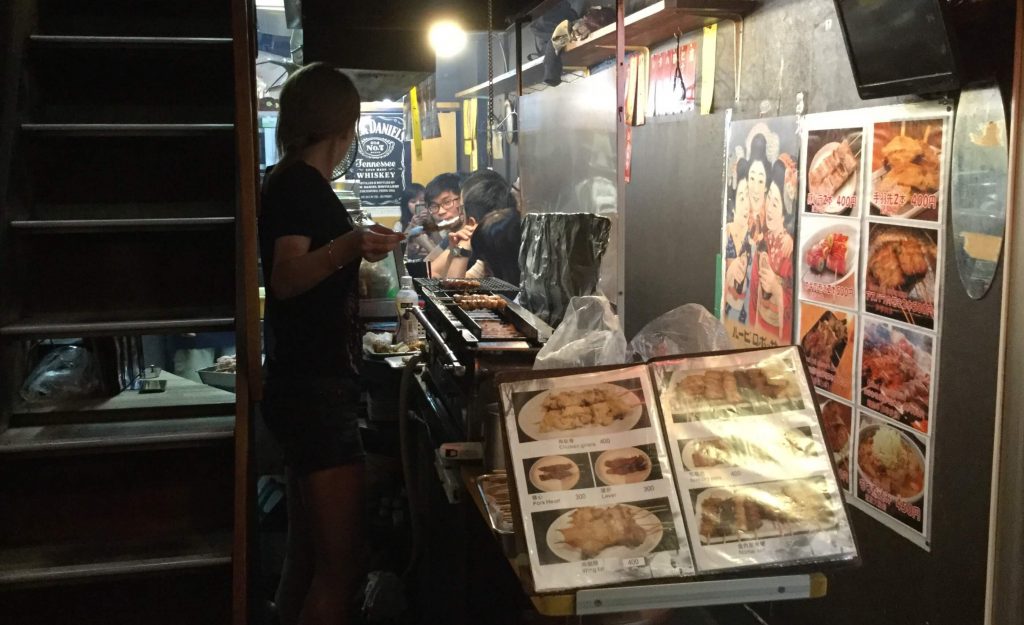 As Japan rose from the ashes to become an economic powerhouse over the following decades Shinjuku sprouted a forest of skyscrapers and department stores, yet Omoide Yokocho has clung on in a prime piece of real estate (no doubt developers would love to get their hands on it) and retained a photogenic old-school Tokyo charm which only survives today in small pockets like this – other notable examples are Golden Gai (also in Shinjuku) and Ameya Yokocho (Ameyoko – アメ横 – for short, a former post-war black market) in Ueno. 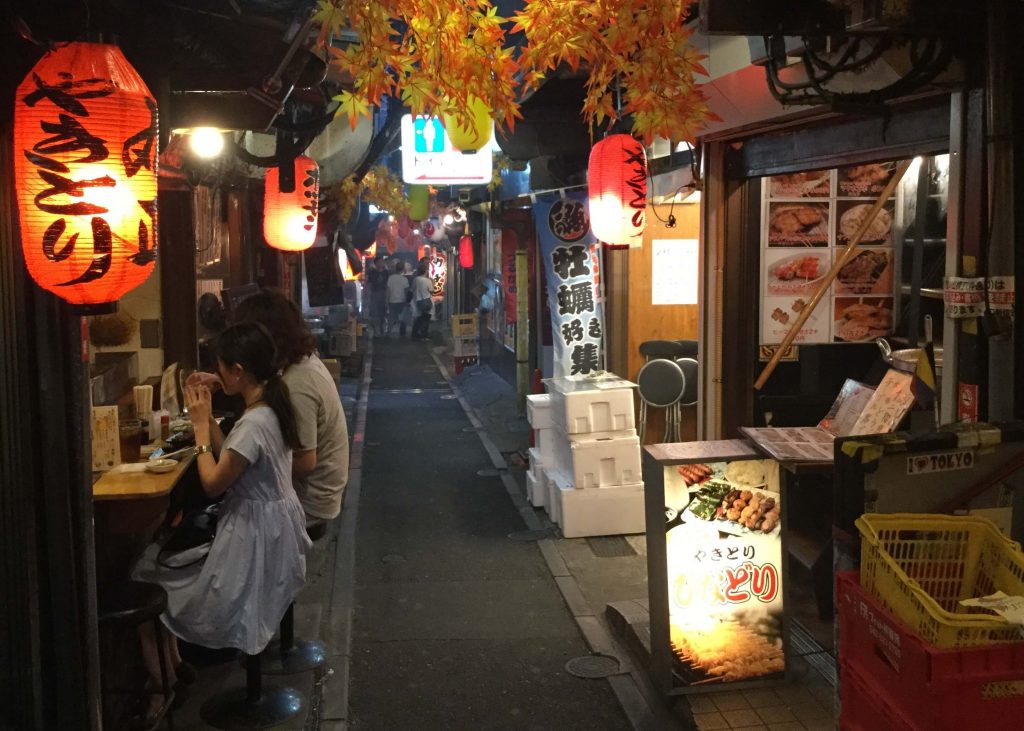 (By the way, don’t be put off by the moniker ‘Piss Alley’ – it came about because there used to be no toilet there! Omoide Yokocho was badly damaged by a fire in 1999, and the repair work included the installation of a small public toilet, but the nickname has stuck)

The alley is set just back from a bustling street, nestled between the JR tracks and a major thoroughfare feeding the station area; walking along that busy modern shopping street and then ducking into this cluttered and atmospheric little alleyway packed with tiny ramshackle food joints is about as close as you’ll get to the street scenes (like this) in Blade Runner. 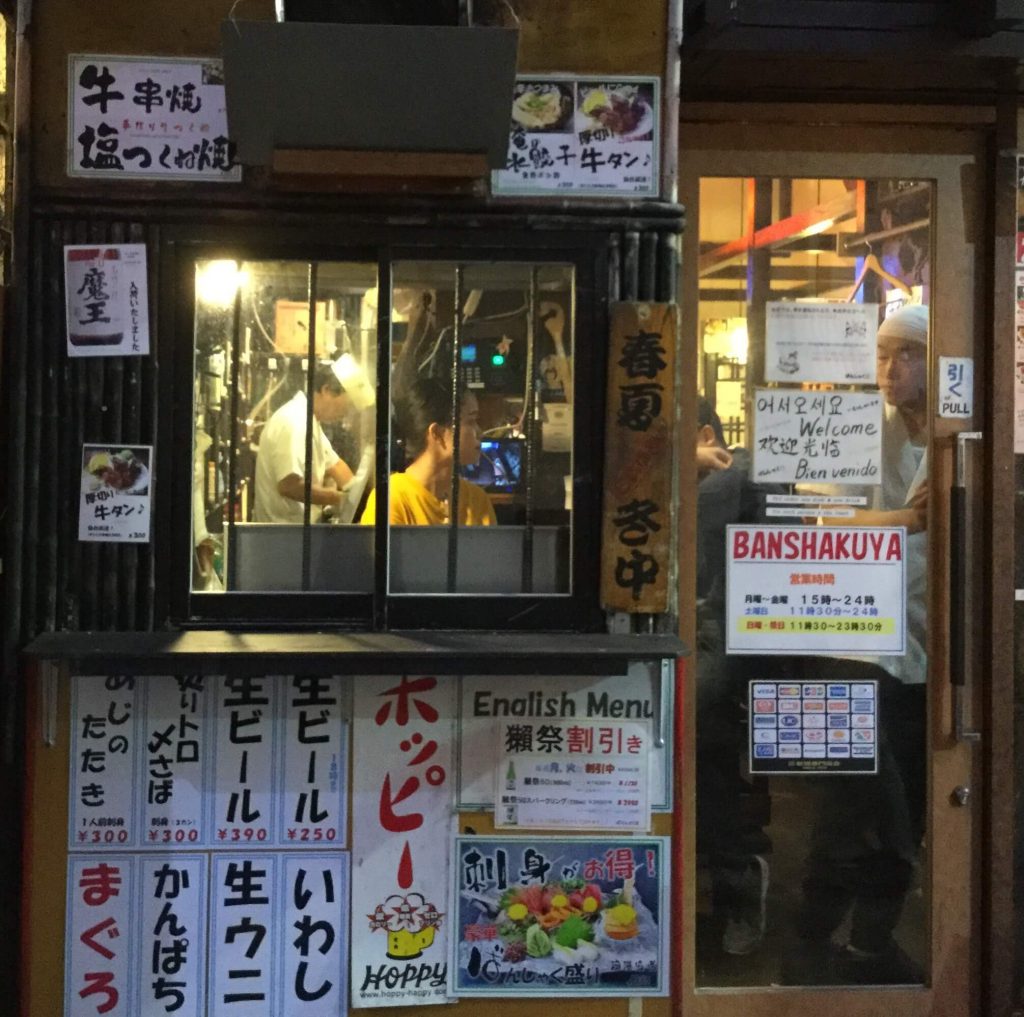 Omoide Yokocho is actually a pair of perpendicular alleys running through a small block, intersecting in the centre; there’s also a row of shops along the outside of the block directly in the shadow of the train tracks. The dozens of shops located within are tiny little spaces, usually simply consisting of an L-shaped counter with a few seats arranged in the gap between counter and wall, and a couple more seats at the front in the alley itself; table charges are common (i.e. a charge of perhaps 300 or 500 yen per head in addition to what you order, with a small ‘free’ appetiser dish served when you first sit) and the prices aren’t as dirt cheap as you might expect (I expect due to the land value of Omoide Yokocho’s location), but the bustling surroundings and ambience make it a great place for a feed and a drink. 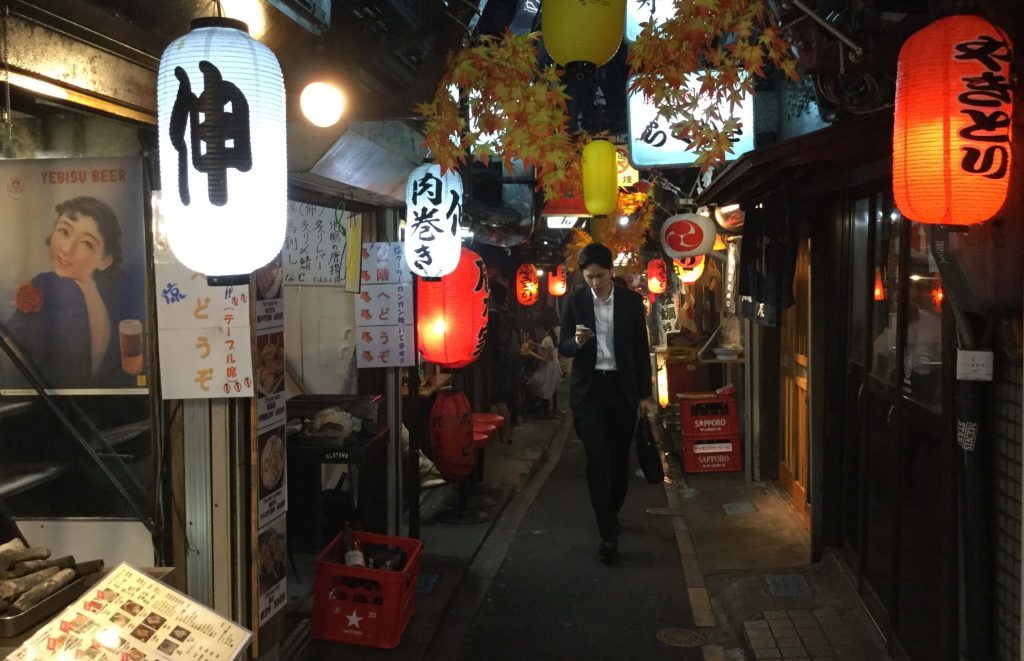 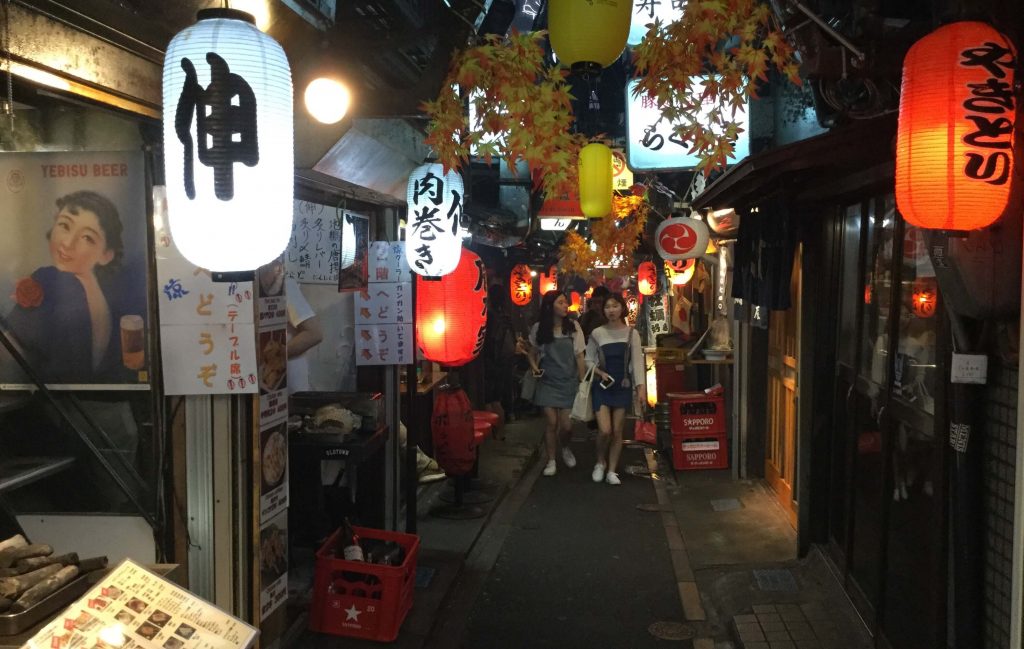 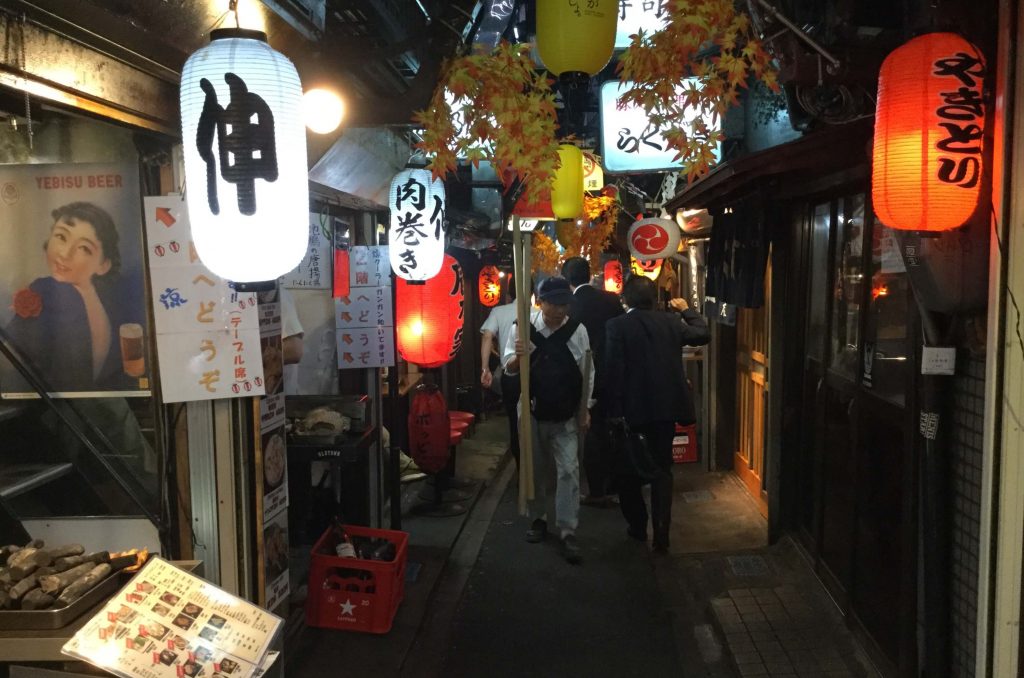 There are a couple of actual bars with a focus on drinks, but most places are food-oriented and just serve beer to go with it. A few of the shops are food only, including my personal favourite, Kameya, on the corner at the intersection of the two alleys: 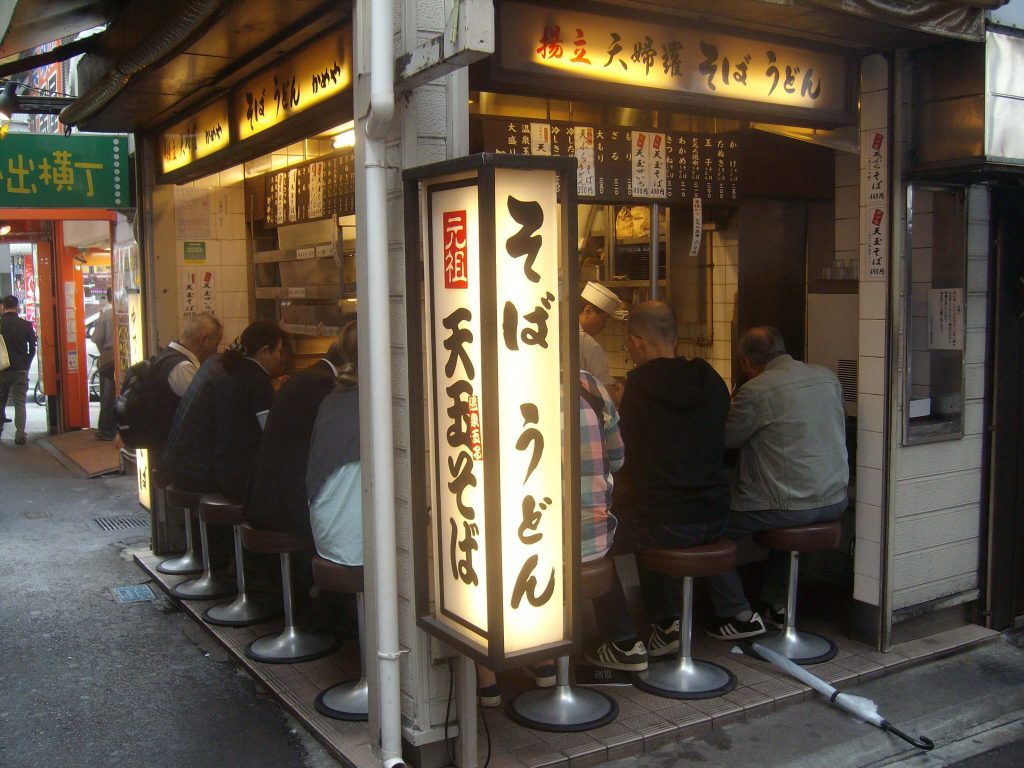 It’s an 8-seat noodle joint serving up awesome bowls of soba and udon for just a few hundred yen, very popular and for good reason. There’s usually a line of people waiting for a seat, and if you’re there in a group don’t expect to necessarily get seats next to each other; the general idea is that when it’s your turn you take whatever seat is available, whack your cash down, and shout your order immediately to the gruff old gents behind the counter. Your noodles are served within a minute or so, and you’re expected to eat them with a minimum of fuss and then vacate the seat for the next person in line. It’s all very no-nonsense, and I love it; if you’re there with a friend or friends, it might work out that you get to sit together, but if not, just go with it. The signage is all in Japanese, but I recommend the following two options: their most popular bowl is the tentama soba (天玉そば, soba noodles topped with tempura and a soft-boiled egg), though I personally go for the tentama udon (天玉うどん); either way, you won’t find a better bowl of noodles at this price point (300 – 400 yen) in Tokyo!

How to find Omoide Yokocho

It’s a little tricky to find; the block in question is at the northwest corner of Shinjuku Station, directly next to the train tracks and a large Uniqlo store, and just before the underpass where Yasukuni-dori runs under the tracks. To get there, exit Shinjuku Station by the west exit (making sure you’re at street level rather than below) and turn right (north), then walk straight for a few minutes until you come to Uniqlo on your right: 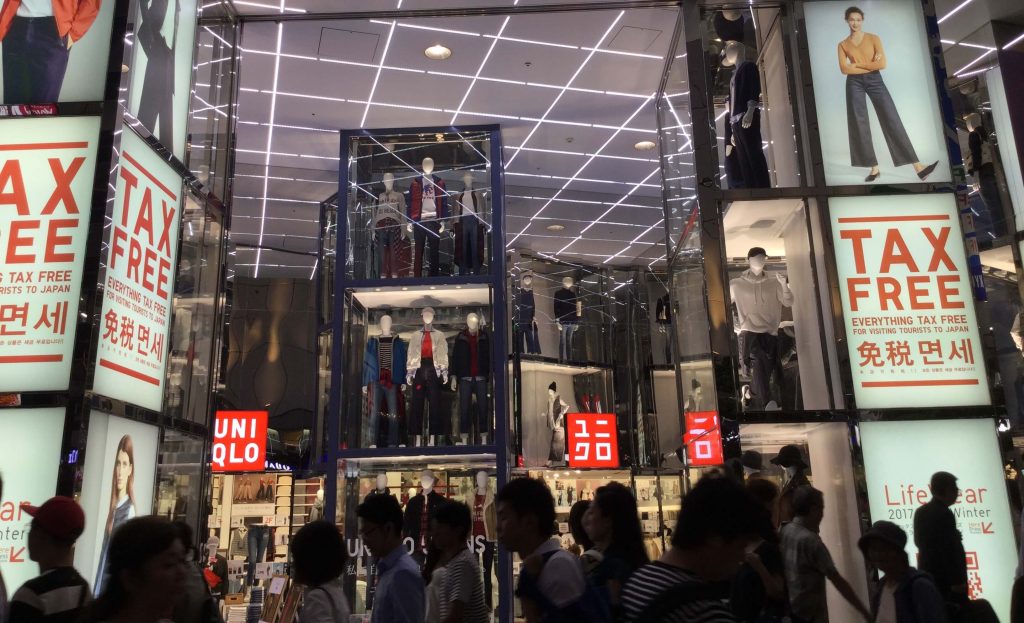 Turning right there into the side street, you’ll then see the Omoide Yokocho entrance on the left: 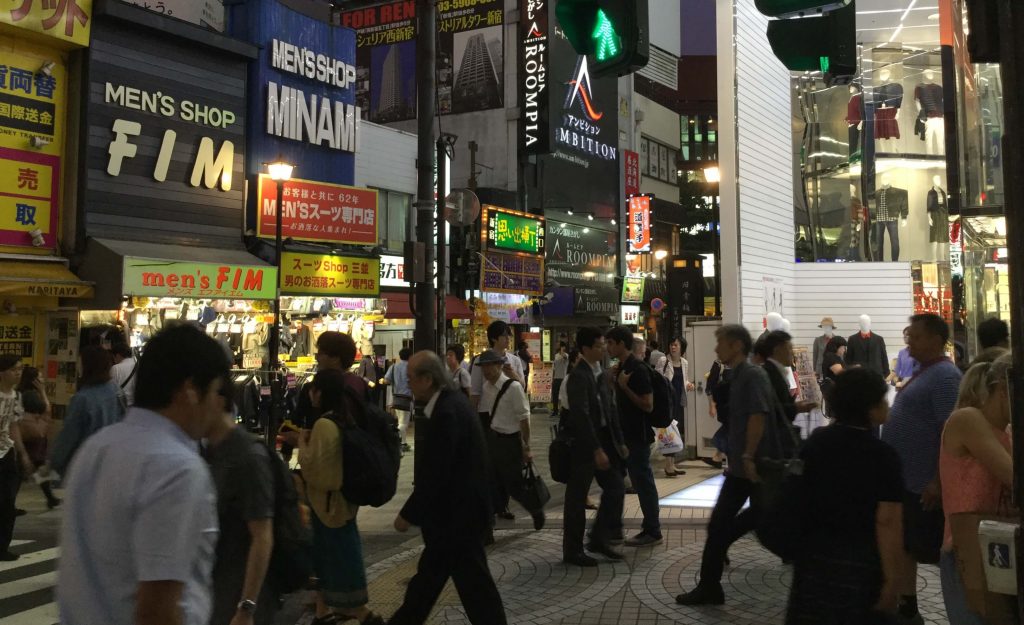 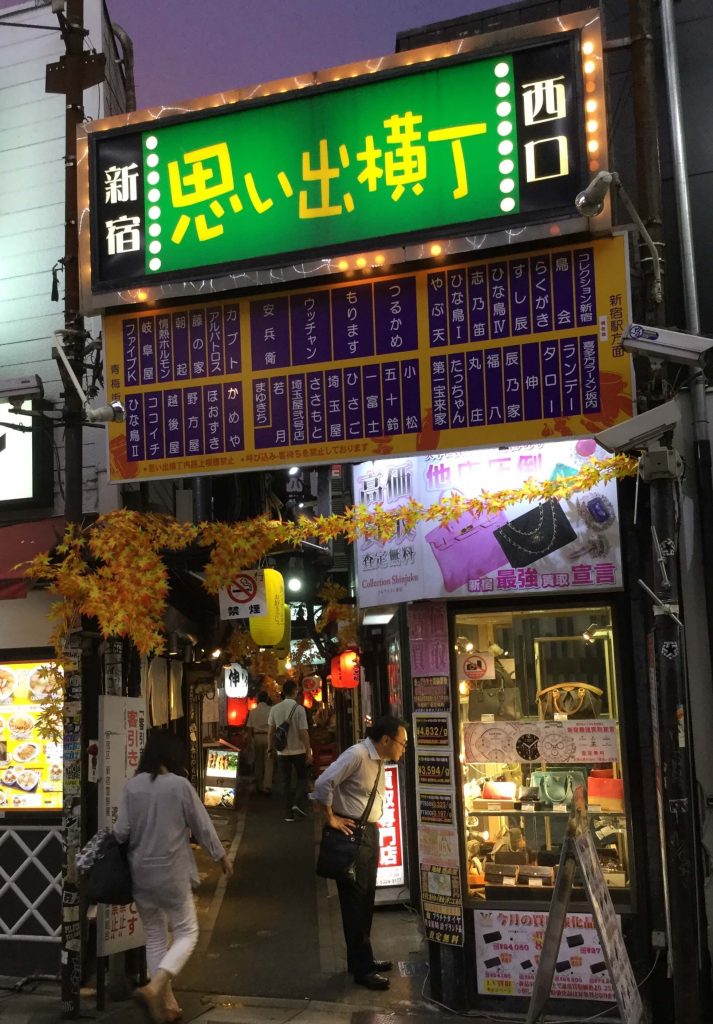 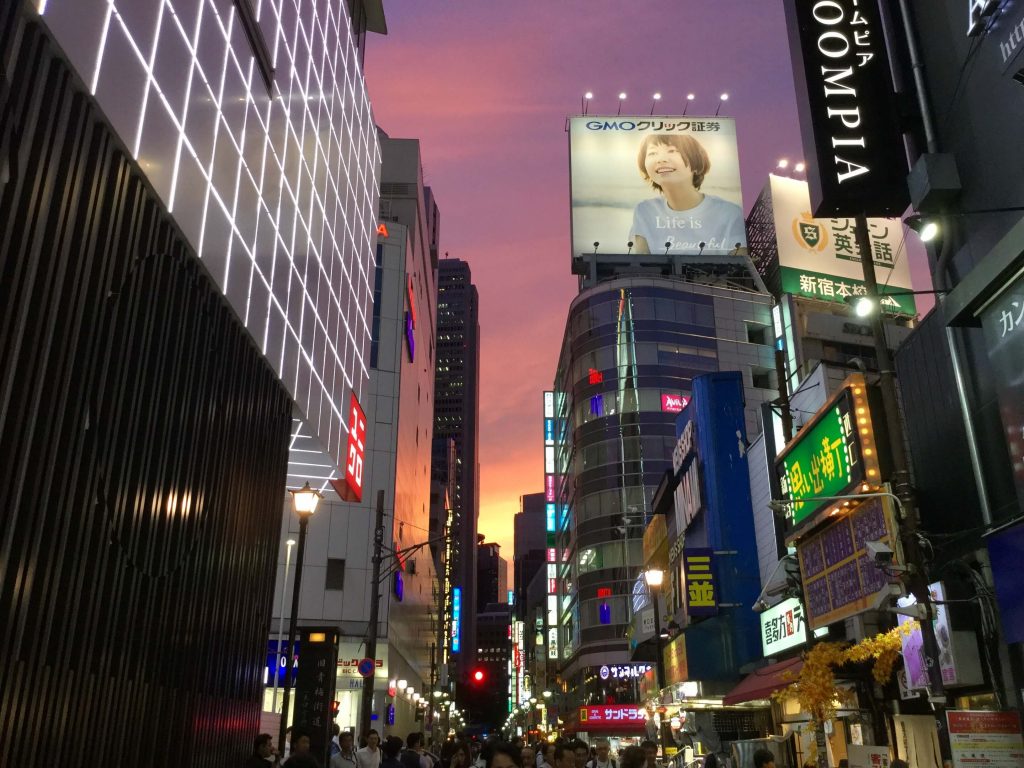 I usually recommend visiting Omoide Yokocho as part of a walking tour of Shinjuku, also taking in the nearby Golden Gai (like a more drinking-oriented version of Omoide Yokocho), the skyscraper district, and the flashing lights of Kabukicho (the red light district). More on Golden Gai here, and see here for my suggested route (with maps) and a bit more info on Kabukicho.

Also, Omoide Yokocho actually has its own website which gives a bit more detail on the history of the area as well as listing the shops, with details of opening times etc – check it out here.

Have you been to Piss Alley? How was it? Any questions? Leave me a comment below and I’ll get back to you.

(This page contains affiliate links i.e. if you follow the links from this page to Hotels Combined or Japan Rail Pass and make a purchase, 4corners7seas will receive a commission from them. This commission comes out of their profit margin at no extra cost to you, and thank you in advance should you choose to purchase anything via the above links!)