Central America gets a bit of a bad rep for travel safety, and while we didn’t encounter any trouble on our trip the cities of Honduras did feel pretty sketchy. That said, the countryside is beautiful, Copan has some fine Mayan ruins, and the Bay Islands are famous for their scuba diving. 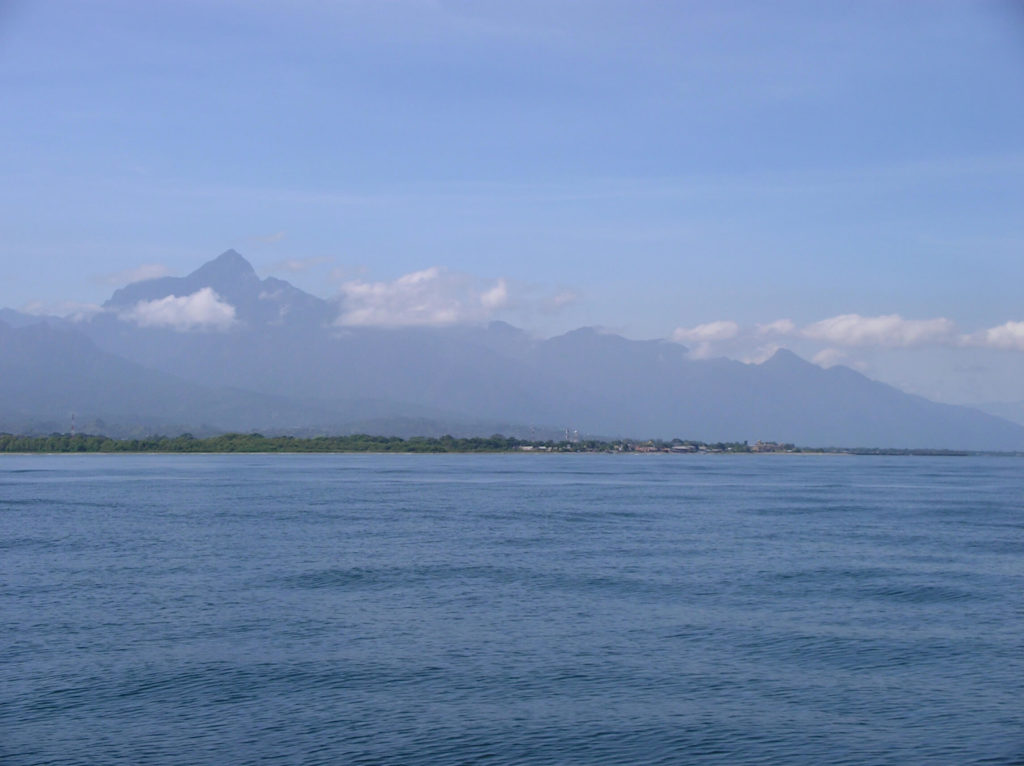 How to travel to, from, and around Honduras overland

There aren’t any train services in Honduras, so overland travel is by road (or sea for the Bay Islands and Belize). Honduras is part of the Central America-4 border agreement, along with Guatemala, El Salvador, and Nicaragua; this means that once you’re stamped in to one of these countries, you’re good for all four for 90 days and can travel freely between them.

The main transportation hubs in Honduras are San Pedro Sula and the capital Tegucigalpa, with buses running all over Honduras and to San Salvador (El Salvador) and Managua (Nicaragua). For the western border with Guatemala, you’re most likely to cross near Copan Ruinas, from where minibuses run directly to Antigua. If you want to go from Copan down to San Salvador, you need to take a minibus to La Entrada, where you can switch to one of the buses from SPS heading south towards El Salvador (you’ll probably have to change transport again at the border). We did this route when we left Honduras; it was a pretty rough ride on mountain roads with some hectic switches of transportation, and the bus from La Entrada was completely packed… but the scenery was cracking and seated passengers on the bus were taking it upon themselves to periodically offer their seats to those standing; such cheery politeness goes a long way towards negating the stressfulness of being on a packed out bus winding through the mountains! (For details on doing the same journey in reverse, see here) 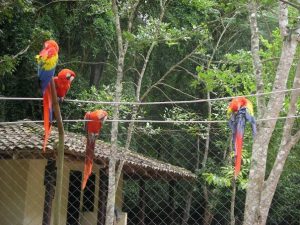 Leaving Copan good and early, we reached San Salvador in the afternoon with plenty of time to find the Tica Bus office, book tickets for the next morning and check in to the upstairs hotel, then go and do some exploring before an early night and a pre-dawn alarm for the bus to Managua. Coffee and breakfast vendors wait downstairs to sell their wares to the bleary eyed passengers waiting to board the bus, and it’s a nice bus ride through El Salvador’s beautiful countryside.

Going from the Bay Islands to Copan, make sure you catch the first ferry of the day or you won’t make it – we missed the ferry because our passports were stuck in the guesthouse safe as the receptionist was late opening up (guess she fancied a lie-in – people are pretty laid back in Utila! Make sure you get your passports the night before to be sure of an early start), and we rushed to the dock just in time to see the ferry casting off. We had to kill a few hours in a cafe before the next ferry, and ended up stuck in SPS overnight… that city has the highest murder rate in the world, and it does feel threatening after dark (we went to a pizza restaurant and it had an armed guard either side of the locked and reinforced door, and the outer guard had to signal the inner guard to let customers in); taking the first ferry should mean you make Copan by evening. In any case, wherever you’re heading, if you’re changing buses in SPS try to arrive early enough to leave the same day, or at least to get everything sorted (including dinner) before it gets late!

The ferries to the Bay Islands (Utila and Roatan) go from the port of La Ceiba, a few hours by bus from SPS. You can book the Roatan ferry online with Direct Ferries, but not the Utila ferry. 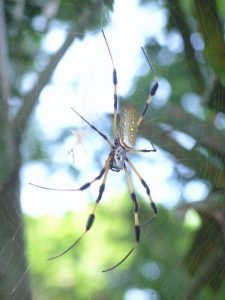 …and local wildlife in Utila!

You can also cross directly between Honduras and southern Belize by boat, skipping Guatemala. This is useful if you’ve already been to Guatemala and don’t want to backtrack, though it’s definitely a bit of an adventure (think small and very fast boats blasting through tropical storms in the open water of the Caribbean – it’s a pretty mental way to cross a border!) and you can’t make it all the way between Belize and the Bay Islands in the same day.

Flying to / from Belize City is definitely easier, but for overlanders the route from Belize City is a bus to Dangriga or Placencia, overnight (or longer, to explore southern Belize) there, and then an early morning boat departure to the Honduran port of Puerta Cortes. From there it’s a 1-hour bus (or shared taxi, if you can manage not to get ripped off) to San Pedro Sula, and another bus from SPS to La Ceiba. SPS and La Ceiba are both rough towns, but La Ceiba is by far the nicer and it’s definitely better to push on to La Ceiba even if you don’t really feel like another four hours on a bus. From there, you can take the morning ferry to Utila or Roatan. 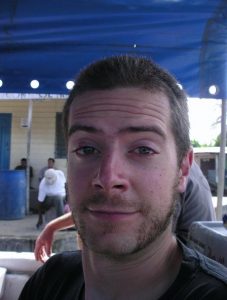 Wind-blasted hair on arrival in Honduras

In our case we boarded the boat in Dangriga, which was good as we had it all to ourselves for the initial ride down the coast to Placencia, a pleasant start on a sheet-of-glass sea. The boat completely filled with passengers in Placencia, but we had the best seats in the house on the bench just in front of the captain. Everyone else was jammed down in the floor of the boat, and when the heavens opened they were covered up under a blue tarp; must have been pretty unpleasant sweating away under the tarp and feeling the boat smashing around in the waves and not being able to see out! I was glad to be sat on a bench with a backrest, tarp covering my body but able to peak out over the top and see the crazy shit we were driving through and feel the wind blasting over my face. It was nuts, but I don’t usually get seasick and I thoroughly enjoyed it!

Belizean immigration officials boarded the boat after we left Placencia to stamp everyone out; upon arrival in Puerto Cortes we weren’t checked or stamped in immediately and had to actually go ourselves to the immigration office some distance from the port (cue lots of nonsense with taxi drivers insisting there was no bus so they would have to take us to SPS directly from immigration, etc. Those of us who took the bus actually got there faster, for a fraction of the price). It seems this has since been changed, with immigration now being done at the port itself – this is good as it means less messing around and you can get to La Ceiba faster.

In the other direction, you’ll need to be in Puerto Cortes around 9 in the morning for check-in, so you’d need to leave the Bay Islands the day before and spend the night in SPS (leave on the first boat to arrive in SPS good and early) or in Puerto Cortes itself.

The schedules for the Belize – Honduras boats are hard to pin down so check locally for exact departure points and times. 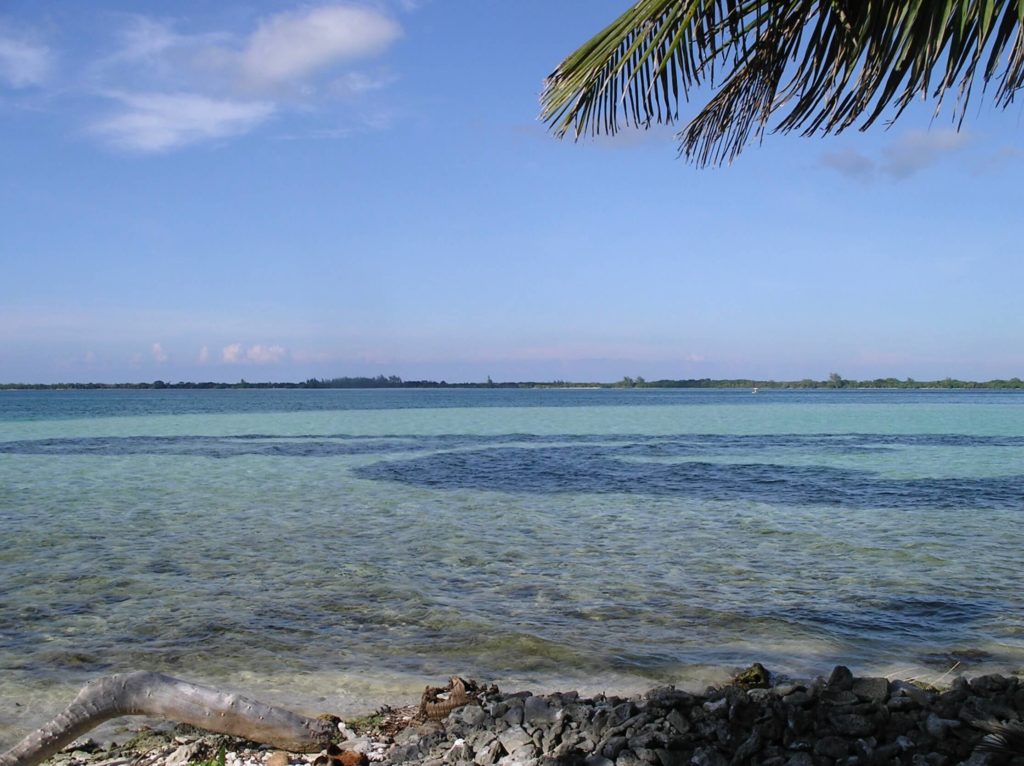 Things to do in Honduras

Scuba diving in the Bay Islands

Search for hotel deals in Utila

(This page contains affiliate links i.e. if you follow the links from this page to Hotels Combined, World Nomads, Direct Ferries, or Amazon and make a purchase, 4corners7seas will receive a commission from them; this commission comes out of their profit margin at no extra cost to you. I’m linking to them because I know, use, and trust their products; thank you in advance should you choose to make a purchase via the above links)