This little gem of a country is a great place to visit in its own right, and an obvious inclusion on overland routes through Central America. Costa Rica is said to have the greatest biodiversity on Earth, and its natural beauty makes this easy to believe. 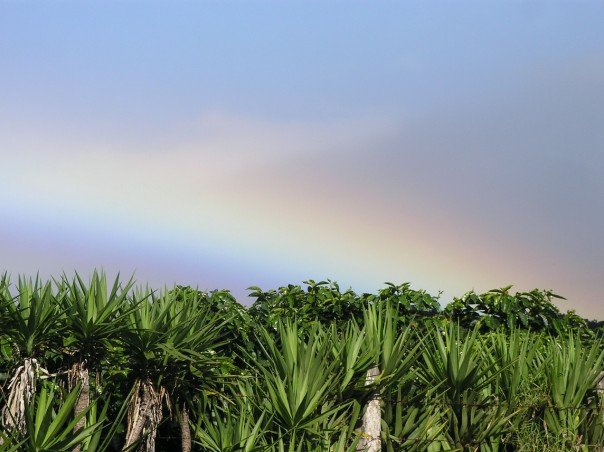 Driving through coffee plantations up to Volcan Poas from San Jose

How to travel to, from, and around Costa Rica overland

The Pan American Highway runs through Costa Rica on the Pacific side of the country, and the vast majority of buses to / from Nicaragua and Panama take this route.

For Nicaragua, there is an alternative crossing by river boat or bus from Los Chiles to San Carlos, on the eastern shore of Lake Nicaragua. This border is said to be hassle-free, but the remote location makes it more effort overall – it will mostly be of interest to those making their way between San Jose or La Fortuna and Nicaragua’s Caribbean coast. Other than this, you’ll be crossing on the Pan American; you can expect a busy border and a fairly tedious crossing unless you’re on a direct Managua – San Jose express bus (like Tica Bus) in which case the process is streamlined. Be aware that when entering Costa Rica, you need to show onward transportation out of the country; if you’re not flying out of Costa Rica, make sure you can show a return bus ticket to Nicaragua or an onward bus ticket to Panama (you can get these from Tica Bus with open travel dates). 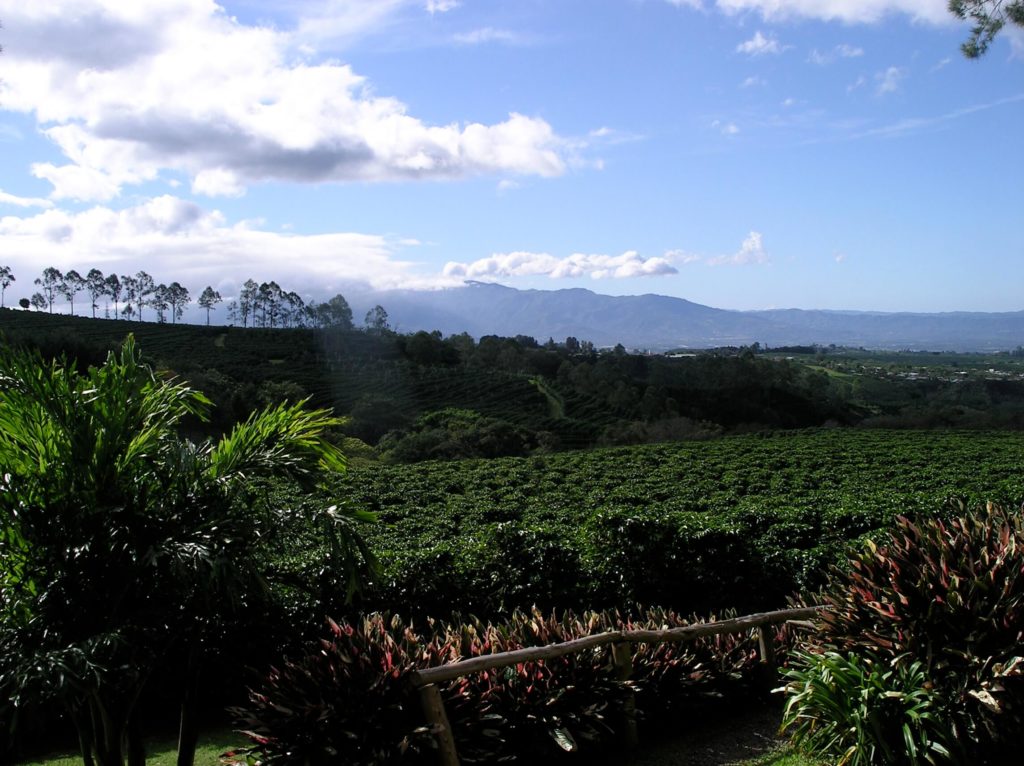 As for the Costa Rica / Panama border… well, that is just one complete and total motherfucker. It really is. I’ve crossed a lot of land borders in the course of my travels and there are two in particular that have stood out as the shittiest (by far) of the lot, and the Paso Canoas border on the Pan American Highway is one of them. The other is Poipet / Aranyaprathet on the border between Thailand and Cambodia… the Poipet crossing is worse for scams, child beggars (put to work by the scum of the Earth), and general squalor… but Paso Canoas is far and away, by country miles, the worst border I’ve crossed in terms of the actual procedure involved. It’s also a shithole too – I’ll never forget the pitiful sight of a dog clinging on to the last moments of its wretched life in the garbage-strewn gutter of the shitty street running through the border town, and that’s the kind of scenery you’ll be treated to while you go through hours of official tedium. Border towns can be mighty strange places, and this particular one is a transit point for Mexican cartel drugs as well as being a transit point for other contraband being smuggled to Costa Rica from Panama’s Free Trade Zone. It was bad going from Costa Rica to Panama, and even worse going back to Costa Rica; all passengers have to get off the bus with all their bags, to be thoroughly searched by hand. This obviously takes some time, and is done in a small room by a handful of border guards; just to get to that point you’ll be waiting for an hour or two. After re-packing all your stuff and proceeding to the next room, you wait for all your fellow passengers to come through and then the bags are checked again by sniffer dogs. After that, you go through to a holding area outside where the guards have all your passports in a pile and call you up one by one to be questioned and scrutinised; and only after that can you finally get back on the bus and be on your way. The whole thing took about three hours when we did it, and this seems to be about par. It’s a demeaning, infuriating, and mind-numbingly tedious process; if all borders were like that, I would not be so keen on overland travel (in fact I would hate it). 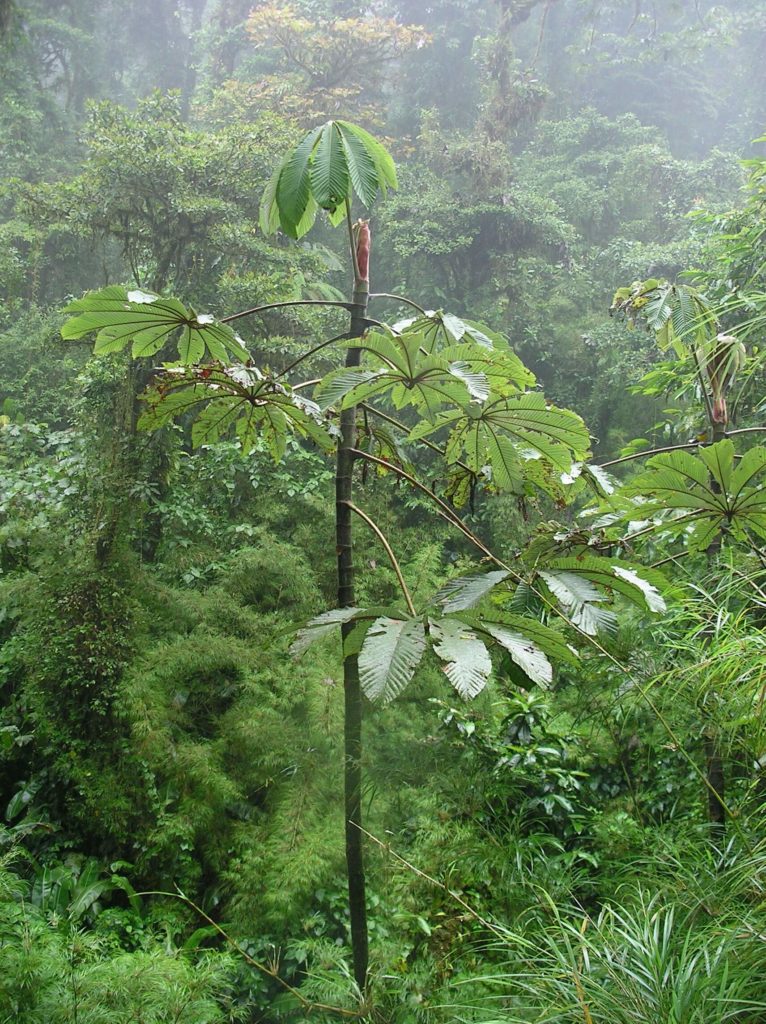 There are a couple of alternatives to this dreadful border crossing though – one at Rio Sereno in the highlands (further inland from Paso Canoas), and one at Sixaola on the Caribbean coast. The Sixaola crossing sounds an awful lot better than Paso Canoas, so that’s good news to those travelling along the Caribbean coast – were I ever to be travelling from Costa Rica to Panama again, I would go this way and visit the Bocas del Toro islands.

The Rio Sereno crossing sounds like the easiest of the lot – being located in a small mountain town it sees few travellers and, crucially, no freight. Unfortunately, all direct buses between Costa Rica and David / Panama City go through the Pan American border from hell so you’ll only cross at Rio Sereno if you’re travelling through the highlands by chicken bus (local bus), or if you have your own wheels (users of the motorbike touring forums all rave about this crossing, due to both the scenery and the ease). But to be honest, that is a very good reason to take your time and travel through the highland towns!

The onward ticket requirement for entering Costa Rica also applies when coming from Panama, so make sure you’re able to show a plane or bus ticket out of Costa Rica. Going the other way, the entry requirements for Panama are even stricter and you need to be ready for them before trying to cross the border… pretty much the only thing that could make that border any worse would be lining up for two hours and then getting turned away for not having an onward flight! (And yes, these days you need to show them an air ticket – see my Panama page for more details)

To get around within Costa Rica, buses run everywhere and the central location of San Jose means that most buses are going to or coming from the capital, making navigation pretty straightforward. Also, when we left Monteverde the bus was cancelled (it’d broken down or had an accident somewhere) so a bunch of us grouped together and negotiated with a minivan taxi instead – more expensive than the bus of course, but he was reasonable and it made for a comfortable journey.

Things to do in Costa Rica 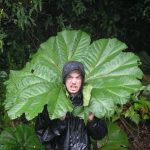 No view of Poas, but the forest was cool

Volcano viewing; the town of La Fortuna is situated below Volcan Arenal which until 2010 was constantly erupting, and the night view of the lava flowing down the mountainside was one of the most famous sights in Costa Rica. Unfortunately we were there in rainy season and didn’t see the volcano at all! But it was still a nice town to hang out in for a couple of days and visit the hot springs… and I’m sure it still is, even though the volcano is now dormant. Another famous volcano to visit is Volcan Poas, just outside San Jose – this one actually has a road up to the crater, making it one of the easiest volcanic craters you can look down into anywhere… unfortunately for us, again, the view was of grey clouds and nothing more. 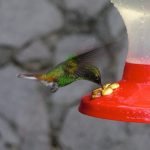 A little birdie in Monteverde

Explore the canopy of the Monteverde Cloud Forest Reserve; you can do this on the walking trails over canopy-level suspension bridges, or for more excitement (and less wildlife spotting) they have zip lines.

Drink awesome coffee; the coffee back home will taste pretty dull after your visit to Costa Rica.

(This page contains affiliate links i.e. if you follow the links from this page to purchase accommodation, travel insurance, or a guide book, 4corners7seas will receive a commission from Hotels Combined / World Nomads / Amazon; this commission comes out of their profit margin at no extra cost to you. I’m linking to them because I know, use, and trust their products; thank you in advance should you choose to make a purchase via the above links)