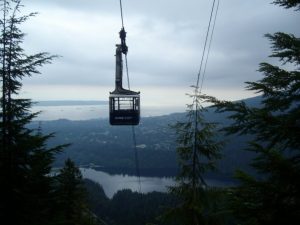 Halfway up the Grouse Grind

Canada is an enormous and beautiful country with many world class hiking trails through breathtaking landscapes of jagged peaks and glacier lakes… but unfortunately I never did any of them. I went to Canada primarily to snowboard, and I did a whole bunch of that and it was in Vancouver that I got my instructor’s licence and worked at Cypress Mountain. It’s a great city to live in if you want to combine city living with an outdoors lifestyle – the Vancouver / Whistler area also has great climbing and mountain biking, both of which I also sampled (the mountain biking in Whistler has to be seen to be believed). As for hiking, though, I only ever got around to doing one single trail – the city’s most famous, the Grouse Grind (plus the Stanley Park Seawall, if that counts as hiking!)

Grouse Mountain is one of Vancouver’s three ski areas, and the easiest to visit if you don’t have a vehicle – the mountain is accessed by cable car, and city buses take you right to the lower cable car station. It’s also open year-round as a sightseeing destination, so even if you don’t want to hike up it’s worth a visit to take in the city views from the top (where you can find restaurants, bars, bears (real ones), shops, and various activities on offer for kids). 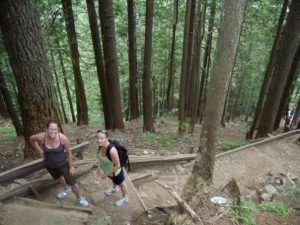 My fellow Grinders taking a breather. It’s basically like climbing a great big staircase through the forest

The Grouse Grind is a short, steep hiking course from the car park at the lower cable car station up to the main building at the top. The trail is only 3km, yet the vertical gain is 853m – it’s basically a giant staircase, and takes most people 90 minutes to two hours. Some take much longer, while others pride themselves on doing it in some amazingly fast times – the record is a (pretty bloody impressive) 25 minutes. Make sure you have plenty of water if it’s hot, and there isn’t much that needs explaining in terms of logistics – head to Grouse, walk up the steps, enjoy an ice cold beer at the top – and, in most cases, take the cable car down! If you’re taking the bus, it’s number 236 from Lonsdale Quay (the Seabus runs between Waterfront station in central Vancouver and Lonsdale Quay on the North Shore). Oh, and one more thing – the Grind is closed from December to May, so if you’re in Van in winter forget the hike and grab your snowboard!

Grouse Grind isn’t a mind blowing hiking course or anything, but if you’re staying in Van for a while it’s something you should probably do at least once; if you’re only in town for a short time, Grouse Mountain is a good place to get a bird’s eye view of the city and the Grind is a good way to get up there.

Other well known hiking options around Vancouver include Mount Gardner and Killarney Lake on Bowen Island, the Baden Powell trail, the Chief (in Squamish, halfway to Whistler on the Sea to Sky Highway), and the Seawall around Stanley Park. (Stanley Park is right next to downtown Vancouver, very easy to reach, with a couple of decent beaches, and the Seawall only takes a couple of hours to walk around – with great views – so it’s a nice way to spend an afternoon, preferably followed by a bowl of ramen on nearby Robson Street)

Have you done the Grouse Grind? What was your time? Any questions? Leave a comment below!

Also, make sure you have a good insurance policy. World Nomads offer flexible travel insurance you can buy even if already overseas – most travel insurance companies won’t cover you if you’ve already left your country, and this can be a crucial point as I once found out the hard way in Thailand. (This is an affiliate link i.e. if you use it to purchase insurance, 4corners7seas will receive a commission from World Nomads – this commission comes out of their profit margin at no extra cost to you. I’m recommending them because I know and trust them from personal use; thank you in advance should you choose to purchase a policy via my link!)