While I do despise the YouTube algorithm as a radicalisation & bullshit engine that human society would be better off without, I must grudgingly admit that it does occasionally dig you up a gem.

It suggested this beauty recently after I’d been listening to some of the Blade Runner soundtrack:

I knew I’d heard that haunting vocal somewhere before; took me a while to place it as I hadn’t listened to the album for years, but it was sampled to great effect by Future Sound of London on their track My Kingdom (from the album Dead Cities):

The original piece is titled Rachel’s Song, written by Vangelis for Blade Runner but unused in the final cinematic release (or any of the multiple director’s cut iterations); in the above video it’s been set to some interesting CGI renderings of Tokyo, prominently featuring Mori Tower in Roppongi (I wonder if it was originally actually some sort of promo video made by Mori).

It got me thinking again (as I discussed here) about how despite not really having any direct connection to the movie, Tokyo is the city which most strongly invokes the visuals of Ridley Scott’s future Los Angeles. And that in turn got me thinking about future visions of Japan itself in various classic animations.

Japanese sci-fi anime has a tradition of imagining some sort of post-apocalyptic Neo Tokyo rebuilt from the ashes following the destruction of the original in a cataclysmic event; here are three of the most influential (all based on popular manga comics).

. The opening shot of the movie is Tokyo from a high angle, the skyscrapers of Shinjuku suddenly silhouetted by the glare of what appears to be a nuclear explosion (later revealed to be a psychic singularity, and the trigger for WWIII) which rapidly expands to swallow them:

The story proper then starts three decades later in Neo Tokyo, a new city built on reclaimed land filling up Tokyo Bay, a visually stunning hi-tech dystopia of martial law, unaccountable elites, biker gangs, mass unrest & violent protests, and towering skyscrapers built upon decaying foundations of urban grit. Not to mention prematurely aged children with psychic powers, and a bike gang member mutating into something which I still don’t understand no matter how many times I watch it. It’s all a bit of a headfuck to be honest, but an absolute feast for the eyes – one which was, almost unbelievably, entirely hand-drawn. Check out the iconic bike battle scene:

…which leads the ill-fated Tetsuo to his collision with Takashi and subsequent torment:

This collision awakens Tetsuo’s psychic powers, culminating in his rampage through the city and that grotesque final transformation in the under-construction Neo Tokyo Olympic Stadium:

In a neat quirk of fate, Akira is set in 2019 and has Neo Tokyo building a stadium to host the upcoming 2020 Olympics – while of course the real-life 2018 Tokyo is presently building a stadium for the exact same purpose. A notable difference though – the 2020 Tokyo Olympics will be the 32nd Games, but the movie’s 2020 Neo Tokyo Olympics are the 30th (the implication being that a couple of Games were missed due to WWIII).

The real Tokyo hasn’t missed the coincidence, and has even been using Akira footage in some of its promo events:

Another influential vision of Neo Tokyo was Tokyo 3 in the trippy anime series Neon Genesis Evangelion; the story goes that the original Tokyo was destroyed by a nuclear strike during the chaos following the ‘Second Impact’, a cataclysmic event in Antarctica causing the entire ice cap to melt and sea levels to rise catastrophically, with the Earth also shifting on its axis leaving Japan stuck in an eternal summer – if you’ve ever experienced summer in Tokyo, you’ll know that isn’t a pleasant prospect! The capital was then shifted to Matsumoto (renamed Tokyo 2), before the construction of Tokyo 3 (in the location of Hakone) as the HQ of the Earth’s defenses against the alien Angels.

This series is actually based on the Apocalypse in the Biblical End of Days sense, with the Antarctica incident heralding a series of attacks by 12 alien entities analogous to the 12 angels of Bible prophecy. And the only people who can stop them are 3 deeply disturbed teenage kids (one of whom is secretly a clone) piloting giant biomechanical Evangelion fighting units (Evas), a nightmarish responsibility which doesn’t exactly help with their existential crises. It’s another total headfuck, and it’s one of my favourite TV series of all time. 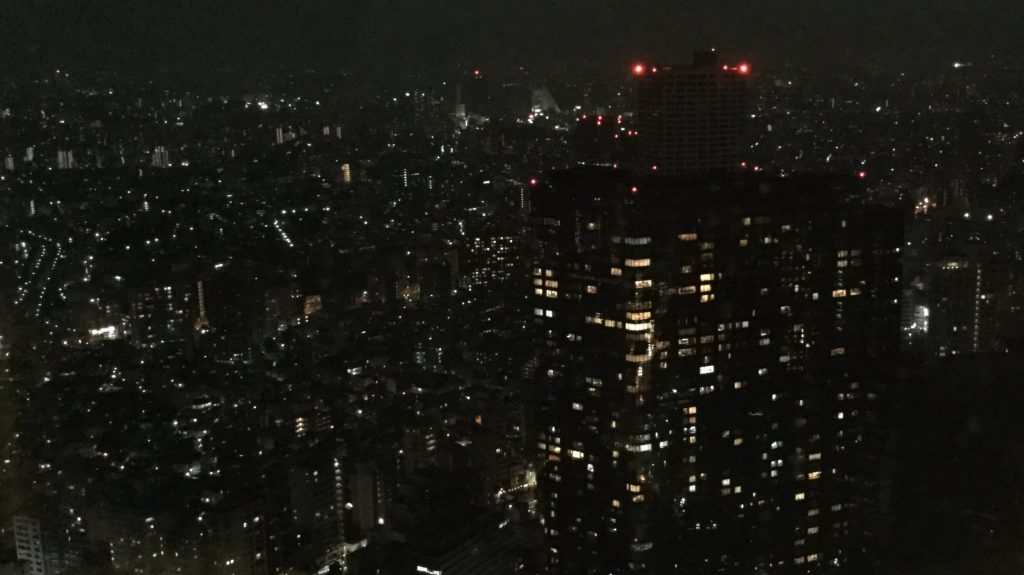 But anyway, as for its portrayal of a future Tokyo, it depicts a city capable of going into ‘battle mode’, with all major buildings sliding underground on rollers and defensive screens sliding up everywhere while the Evas do battle with the angels. Not something we’re ever remotely likely to see, of course; but in-between the angel attacks we see the daily life of the characters in a city almost entirely alike the Tokyo suburbs of the 90s, when the anime was made. The kids’ school looks like any Japanese high school, they all live in apartment blocks just like the ones everyone in Japan actually does live in, and they rattle around on trains exactly like the ones rattling around Tokyo on any given day. So while it’s a crazy battle-mode sci-fi city, it’s also just like everyday suburban Tokyo, and there are some great little daily life sequences in the anime & spin-off movies like this:

And the never-ending summer is done well, with the constant soundtrack of cicadas and the characters bitching about the heat as they mop their brows with handkerchiefs. Just like real Tokyo in summer, in other words.

It all gets a bit Godzilla when an angel turns up for a mecha-scrap and they seem to destroy half the city each time, but in the end it turns out the real battles are internal, in the characters’ own heads, leading to another ending that left viewers scratching their own heads in turn.

Here’s the angel Ramiel attacking Tokyo 3 (from one of the spin-off movies):

One more for this post is Ghost in the Shell – not the movie version(s), which use Hong Kong as the setting and which I’ve written about here – but the Stand Alone Complex anime series which is set in a clearly Japanese environment. Specifically, the story takes place in Niihama, a new megacity built on artificial land in the Seto Inland Sea after the destruction of Tokyo in World Wars 3 and 4 (real bunch of optimists, these manga writers).

Much like Evangelion, despite the post-apocalyptic scenario the action takes place in an environment very much recognisable as modern-day Japan, but with far more advanced AI and cybernetic enhancements as routine. It’ll probably prove to be the least wildly inaccurate prediction of the future Japan on this page, but it’s the setting of the Hong Kong-based movie version that leaves the stronger impression.

So there you go, apropos of very little, some waffling musings on depictions of post-apocalyptic visions of the future in dystopian Japanese anime – aka how I just passed the time on the shinkansen from Kyoto to Tokyo!

Check out my posts on Blade Runner and Ghost In The Shell. More Tokyo posts here, and check out my quick guide to Tokyo; for more on Japan click here