At 2,228m Mt Kosciuszko is the highest mountain in Australia, located in the Snowy Mountains in New South Wales. The nearest town is the small ski resort of Thredbo, where I was based for the ski season of 2004. Towards the end of that season, a group of us who worked together at the Denman Hotel (be sure to visit the Denman’s Apres Bar – where I earned my keep – for a few post-hike cocktails!) decided to hike to the summit from the ski area’s top lift station with our snowboards strapped to our backs and then ride back down to the village. So this is really more of a snowboarding post than a hiking post, but if you’re reading this because you’re planning on hiking Mt Kosciuszko from the Thredbo side in summer you’ll hopefully still find this write-up useful.

The trail starts from the top of Thredbo’s main Kosciuszko Express chairlift (which runs year-round), and as it’s entirely on a raised walkway (for environmental protection) there should be no navigational issues at all when doing this hike outside of the snow season. Just ride up the chairlift (or walk up the Merritts trail under it if you don’t want to cheat!) and then follow the trail to the summit. The NSW National Parks website has more information, including the estimated walking time of around four hours for the 14km round trip.

It’s a different proposition during the snow season (i.e. both winter and well into spring until the snow eventually melts), as the trail is covered by snow and the conditions can be very dangerous. A number of skiers and snowboarders have lost their lives in the Thredbo backcountry, so you really shouldn’t go there if the conditions are wrong or you don’t know the area – in fact I wouldn’t usually recommend going into the area at all during the winter, and ski patrol will block access from the top lifts during periods of heavy snow. But Mt Kosciuszko is popular with cross-country skiers, and if you do want to get up there on skis or with boards you should do so on a clear blue-sky day in spring with no clouds on the weather forecast and no avalanche warnings for the area. If any of that isn’t right, don’t chance it. Furthermore, if you don’t have someone with you who knows the area (and therefore which mountain you’re aiming for), don’t chance it! With all that said, we had an absolutely cracking day even though it involved a lot more hiking than it did riding. Rather than it being one single slope, the route for hiking Mt Kosciuszko takes you up and down over a series of ridges, so we found ourselves hiking up one side, riding down the other, and then unstrapping to hike up the next. 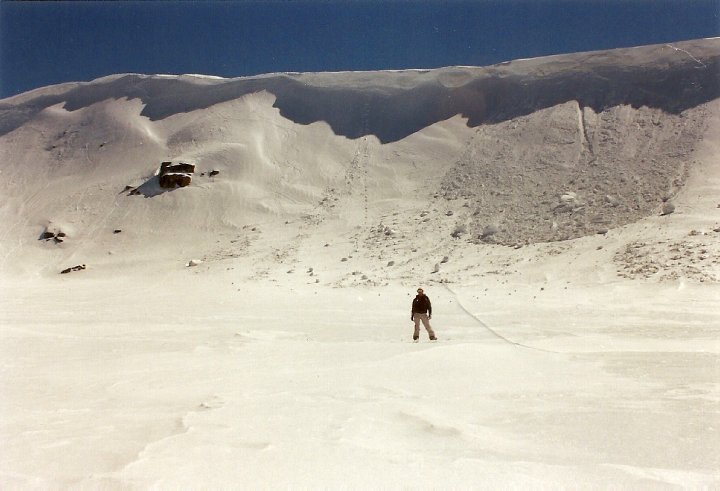 As we were taking some group photos on the penultimate ridge before the Kosciuszko summit, we spotted another group hiking along the Kosciuszko ridge – and they actually triggered an avalanche, sending huge boulders of ice breaking off the cornice and tumbling down the ridge. The main thing I remember about it was the incredible noise, a deep rumbling almost like a couple of fighter planes were making a low pass somewhere in the near distance. Watching and listening to it, it was pretty clear that to be caught in one of those would almost certainly be fatal, and in fact we couldn’t tell at first if any of the figures we’d seen on the ridge had fallen. But they continued on their way, having heard it but not been able to see it from their position (in the bar that evening it turned out that we knew one of them – a local photographer who was out there to shoot some backcountry skiing – and he told us how it’d sounded from where they were i.e. they shat their pants and ran for it!)

After seeing that we continued on to the summit, took some more group photos and took in the beautiful views and clear air, and then set off back to the village. The return journey was obviously easier with more of it being downhill, but we still didn’t really manage any extended runs. The longest single downhill section was dropping off the main Kosciuszko ridgeline just below the summit – but obviously we had to stay well away from the overhanging cornice we’d seen avalanche a short time earlier. So, while it was a great day out in the mountains with great friends, it wasn’t really a day of great snowboarding – if you want a good day’s riding you’re better off sticking to Thredbo’s pistes, and if you want to climb Australia’s highest peak you’re better off doing it in summer! But if you do want to combine the two, take due care and have an awesome day.

Have you been to Mt Kosciuszko? How was it? Any questions? Leave a comment below and I’ll get back to you.

Search & book Thredbo accommodation here, and make sure you have a good insurance policy – World Nomads offer flexible travel insurance you can buy even if already overseas (most travel insurance companies won’t cover you if you’ve already left your country, and this can be a crucial point as I once found out the hard way in Thailand)