This page originally appeared on my Rugby Guide Japan website, providing information for rugby fans attending 2019 Rugby World Cup matches at Kobe Wing Stadium. It may still be useful for future visitors to Kobe, so I’ve moved it here after taking the rugby site down. 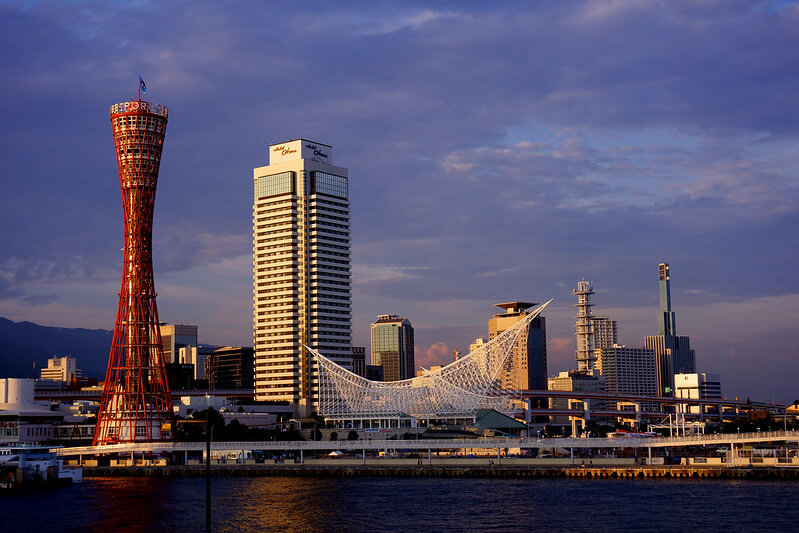 The sprawling conurbation of Osaka, Kobe, and Kyoto forms the heart of the Kansai region and is Japan’s largest urban area after Tokyo. Kobe’s just west of Osaka, stretching away along the coast of Osaka Bay. Sandwiched between the sea and the mountains, it’s an attractive city and easily visited as a day trip from Osaka even if you don’t stay there.

Where to Stay in Osaka & Kobe

Osaka: the Namba/Shinsaibashi area is the obvious choice for proximity to shopping, dining, and nightlife, and also easy access from Kansai International Airport (the Nankai Line runs direct from Namba to KIX). The Umeda area (near Osaka Station) is also lively and well-connected. The Shin-Osaka area isn’t really recommended unless you want to be as close as possible to the shinkansen line, in which case it’s perfect e.g. if you’re planning day-trips to Hiroshima, Himeji, Kyoto, etc

Use Hotels Combined to search all the booking sites (Agoda, Booking, etc) for the best rates:

Kobe: Sannomiya’s the main centre of Kobe in terms of shopping, eating & drinking, and accommodation, and is the obvious place to stay. It’s also feasible to stay in Osaka, as it’s just 25 minutes from Osaka Station to Sannomiya; for this, Umeda would be the best place to stay.

Ok, so the transportation in Kansai is a complex hodgepodge of train systems operated by different companies, some limited to one city and others running between cities. First piece of advice is to get the Icoca card from a JR station (the other IC card in Kansai, Pitapa, runs on a credit system so isn’t available to short-term visitors), which you preload with cash and can use on all trains and buses in the region (the JR Pass can also be useful if you have one, for the Osaka Loop Line and for intercity trips between Osaka, Kobe & Kyoto). Then check Hyperdia for train route details and just follow the suggested route (see here for an explanation on using Hyperdia), and the IC card works the payments out. If you already have an IC card from another region (e.g. Suica or Pasmo from Tokyo) you can also use it in Kansai. For more on IC cards see here.

Things to Do in Kobe

You can also easily head to Osaka, just take the Hanshin Line from Sannomiya to Namba; the Namba & Shinsaibashi area is shopping central, with the long Shinsaibashi shopping arcade running north from the famous ‘Running Man’ bridge. For electronics, Yodabashi Camera in Umeda has absolutely everything and there’s also an older Bic Camera in Namba.

Namba/Shinsaibashi is also the main nightlife zone in Osaka (and in fact the whole of Kansai), with all sorts of bars, restaurants, nightclubs, and not-for-tourists hostess clubs densely packed in to the grid of streets between Namba, Shinsaibashi, Nagahoribashi and Nippombashi stations. The Amemura (‘America Village’) area on the other side of the main Midosuji boulevard is also home to many bars in the streets around Triangle Park (officially called Mitsu Park). However, the best individual club in Kansai is surely Club World up in Kyoto – Osaka’s clubs are perhaps less impressive than you might expect, though if you’re only in town for a few days you’ve got enough different options. In Sannomiya there are plenty of bars & eateries to check out, but Kobe kids do most of their clubbing in Osaka.

Clubs: Sam & Dave (Shinsaibashi, trashy), Club Pure (round the corner from the Running Man bridge, trashy), Giraffe (Dotonbori canal next to the big Donki Hotei shop, trashy). There are many more, but these are the obvious big ones. There’s also Bar Heaven, a ridiculous after hours place hidden away up an elevator in Shinsaibashi – if you’re still going strong when the other places kick you out, head to Heaven and keep dancing & drinking until 10am. In Kyoto hit Club World near Kawaramachi Station, see here.

Sandwiched in a fairly narrow space between the mountains and the sea, Kobe’s an attractive city with a compact downtown area you can explore entirely on foot.

Kitano: back in the days when Japan first opened its ports to the world following centuries of isolation Kobe was one of the main points of entry to foreign trade and influence, hence the existence of Kobe’s Chinatown, and hence the collection of European-style mansions (‘ijinkan‘) on the Kitano hillside overlooking the city. These mansions are now preserved as sites of historical interest and can each be visited for a small fee, and the Kitano area is today an attractive strolling district of cute cafes and ocean views. See here for a list of the mansions with map, entry fee details, etc

Chinatown: Kobe Chinatown is officially named Nankinmachi (‘Nanking Town’) after the Chinese capital at the time Kobe port opened to foreign trade. It’s a much more compact affair than Yokohama’s sprawling Chukugai, and the dumplings are so good it’s pretty much the first thing I want to do whenever I step off the train in Kobe. Nankinmachi is a 5-minute walk south of Motomachi Station (one stop west of Sannomiya), and also easily walkable from Sannomiya. Nankinmachi has a homepage here (Japanese only)

Waterfront: a 10-minute stroll south from Chinatown you come to Kobe’s main waterfront area. The distinctive red Kobe Port Tower stands next to the equally distinctive architecture of the Kobe Maritime Museum with its white sail roof, and a short walk to the east there’s a small section of the harbour preserved as it was in the immediate aftermath of the 1995 earthquake which devastated the city; the crumpled railings and fractured concrete are a good illustration of how powerful the quake was. A 10-minute walk west from the tower there’s Harborland, a massive shopping complex with yet another Ferris wheel (from Harborland Station it’s just a couple of stops to Wing Stadium)

Mt Rokko: the highest point along the ridge which stands behind downtown Kobe is Mt Rokko, easily accessed via the Mt Rokko Cablecar (see here, and access map here). The main attraction up there is the cracking views of the Kobe/Osaka (Hanshin) conurbation and Osaka Bay, and there’s also a botanical garden, shops and a museum, and even a tiny ski slope.

Akashi Bridge: the world’s longest suspension bridge, this engineering marvel spans the 4km gap between the mainland and Awaji Island. It’s a 20-minute train ride west of central Kobe, and if you get off at Maiko Station you can go up an elevator to the observatory within the structure of the bridge (see here)

Kobe beef: Kobe’s claim to culinary fame is its legendary beef. You can easily shell out hundreds of dollars per head, but more reasonable options do exist; see here for a searchable list, you’ll need to auto-translate it but you can set the search options according to budget, preferred seating style (counter, table, private etc), and type of restaurant (steakhouse, teppanyaki, shabushabu, sukiyaki etc)

Kyoto’s close enough to make day-trips, you’ll barely scratch the surface that way but if you only have a day spare I’d recommend Fushimi Inari and/or this walking route. For more on Kyoto see here

Any questions about Kobe? Give me a shout below and I’ll get back to you.

Click the banner to pre-order your JR Pass and save 40 dollars:

Search for hotels in Osaka and Kobe

Despite many visits to Kobe, I’ve somehow failed to take any pics there except for the Rugby World Cup match! Other photo credits as follows: