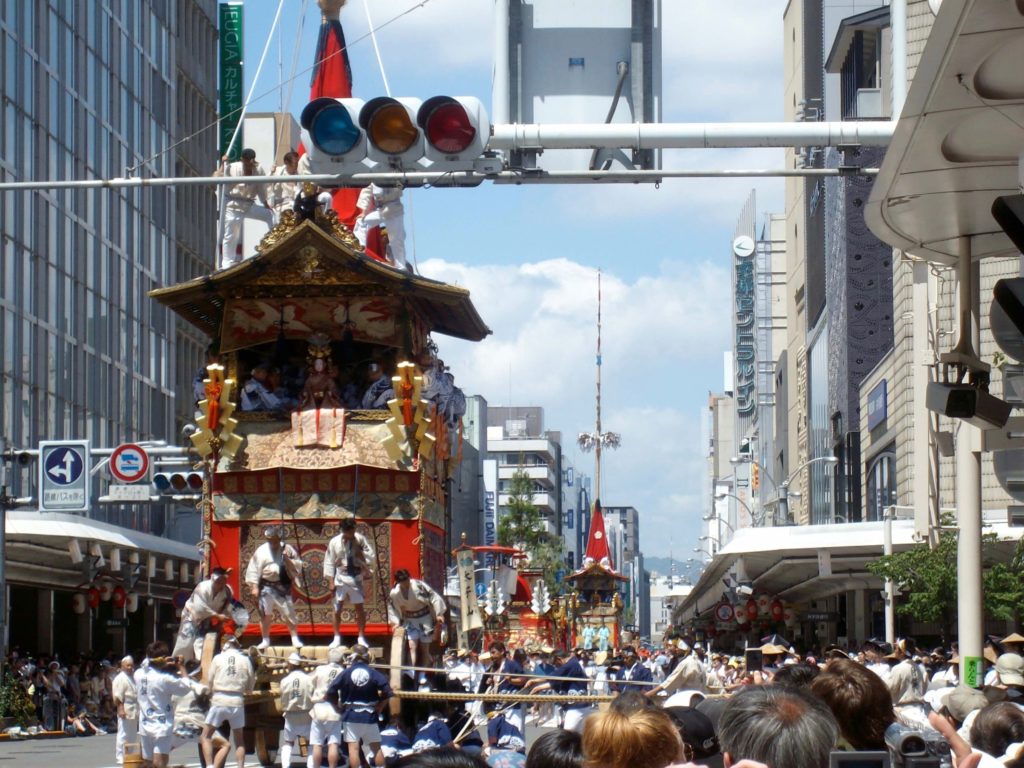 The Gion Matsuri is foremost among the 3 great matsuri (festivals) of Kyoto (the others are the Aoi Matsuri and Jidai Matsuri), as well as being recognised as one of the 3 great festivals of Japan (along with Tokyo’s Kanda Matsuri and Osaka’s Tenjin Matsuri).

Gion Matsuri has been held every July for more than a thousand years. It’s a Shinto religious festival, a kind of purification ritual for the entire city to ward off disease and natural disasters. That may sound quite serious, and the main procession on the 17th is indeed a fairly earnest affair, but for the 3 nights of the 14th-16th the streets of central Kyoto are closed to traffic and given over to a big street festival including food stands and game stalls. These 3 nights are called yoiyama, and the crowds roam the sweltering streets dressed in yukata (light summer kimono) with beers in hand. The main parade involves a procession of enormous wooden floats called boko being hand-pulled along the route by teams of men straining at the ropes, while smaller o-mikoshi portable shrines are paraded through the streets during yoiyama, all soundtracked by the high-pitched music of traditional flutes and the jingling of bells. 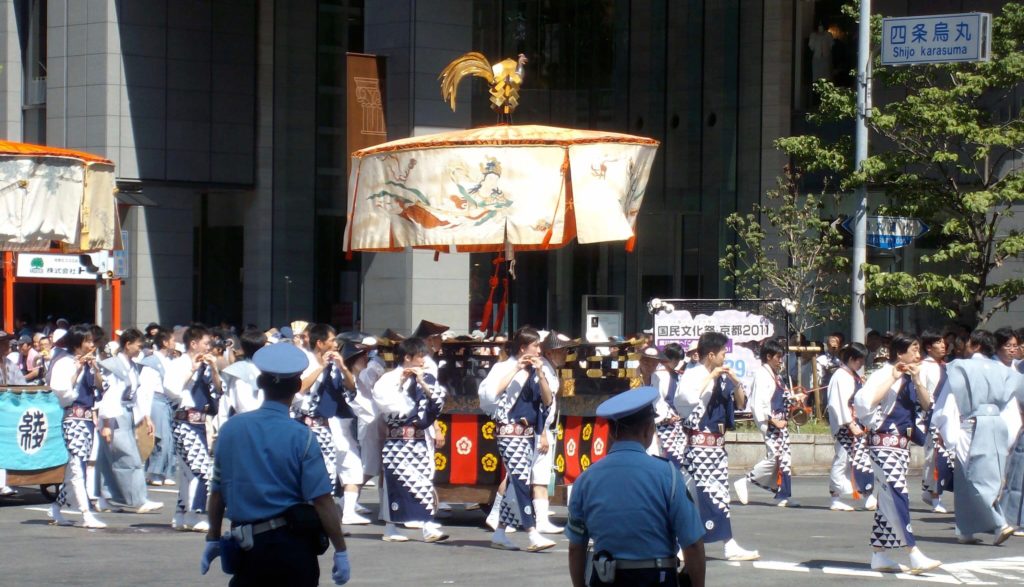 Officially the festival takes place across the entire month of July, but really if you’re visiting Japan and looking to experience the Gion Festival it’s the yoiyama and main parade that you’re after (should you miss those but are able to visit a week later, there’s a secondary parade on the 24th). I’d suggest trying to be there for the night of the 16th (or the 14th or 15th, especially if they fall on weekend nights) and the parade on the 17th. 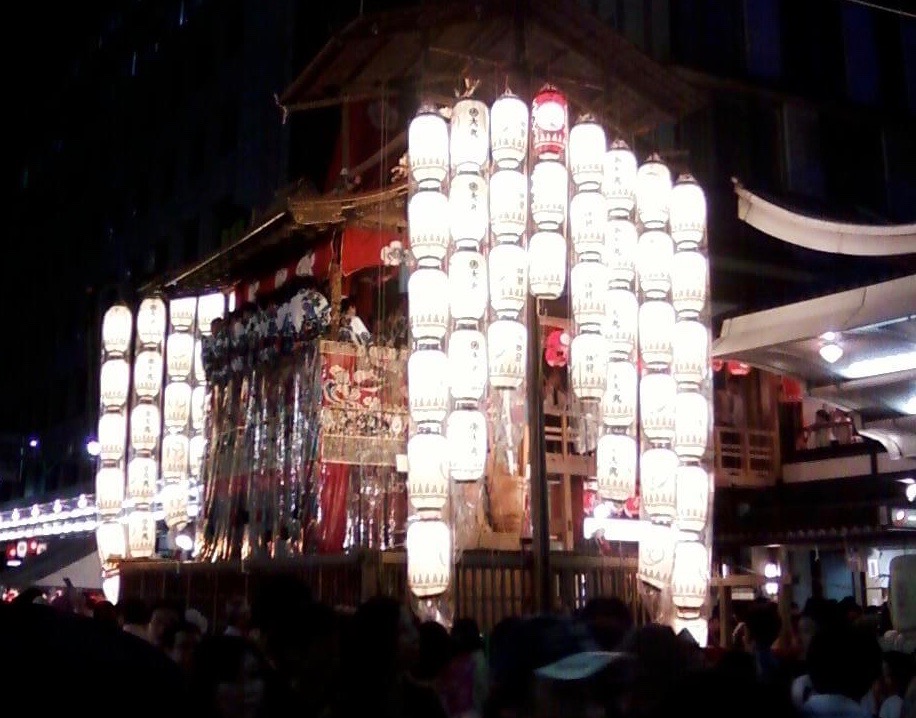 On the yoiyama nights you can join the crowds and wander the streets enjoying the food and drink on offer. The boko floats are parked up in their pre-parade positions so you can take a close-up look at them, and you can also pay a small fee to board them. The biggest, the yamaboko (‘mountain floats’), are particularly impressive and stand on Shijo-dori to the west of the Karasuma intersection. These boko are topped off with tall naginata, medieval weapons similar to halberds (as famously wielded by the legendary warrior monk Benkei), giving them their alternate name of naginata-boko.

My photos of yoiyama aren’t great as they were taken on my old keitai (Japanese flip-phone), but gives you an idea what it’s like: 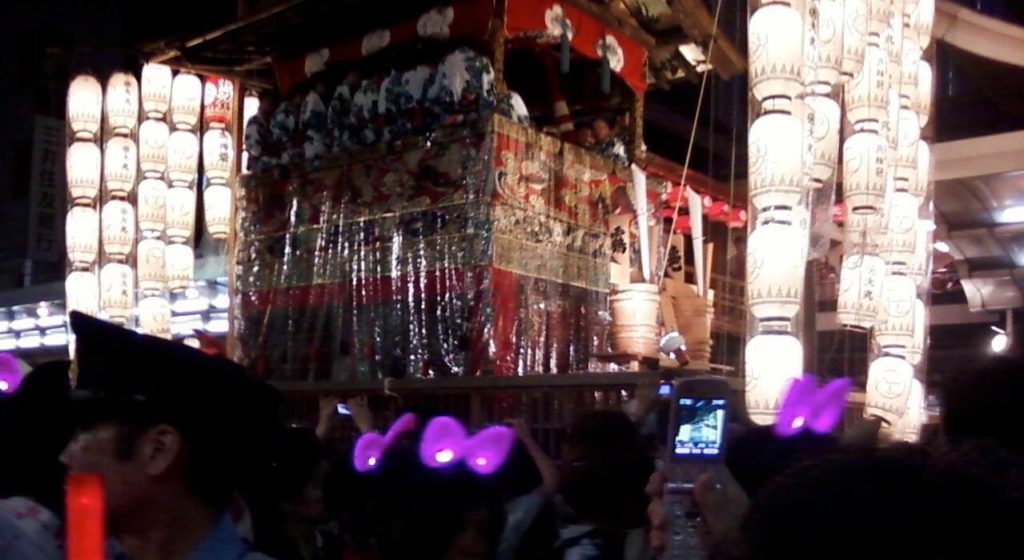 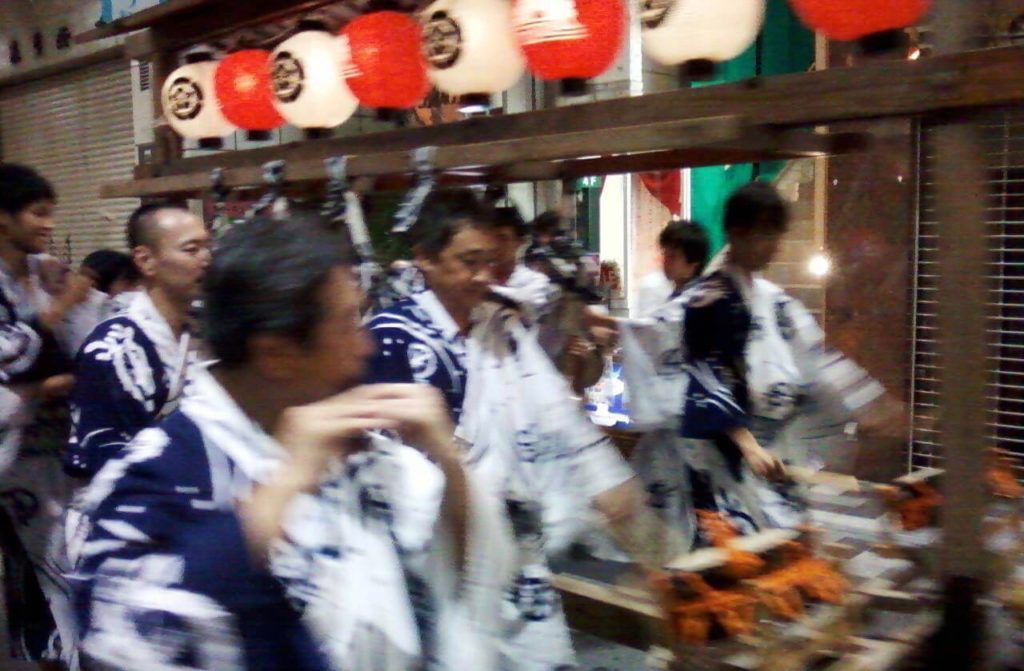 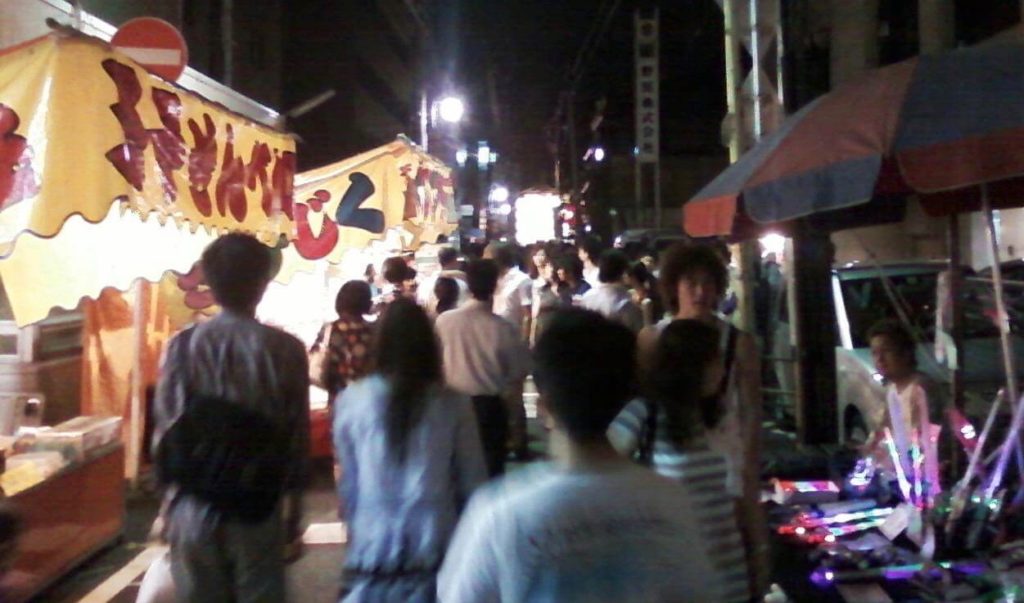 If yoiyama’s the fun bit, the main parade is the more impressive bit. The boko have to negotiate a number of right angle turns, but are constructed with no steering mechanism. This necessitates a tricky turning maneuver involving logs placed at gradually increasing angles in front of the boko, which the teams must pull them across such that they slowly turn as the logs roll under them. The wheels of the boko of course have to be locked for this, which is achieved with some heavy duty rope work, and the team leaders stand on the front of the boko urging them forward with synchronised chanting and sweeping gestures of the fans they hold. Meanwhile the musicians sitting in the upper levels of the boko never let up, and there’s an appreciative murmer from the watching crowd when each boko successfully makes the turn. 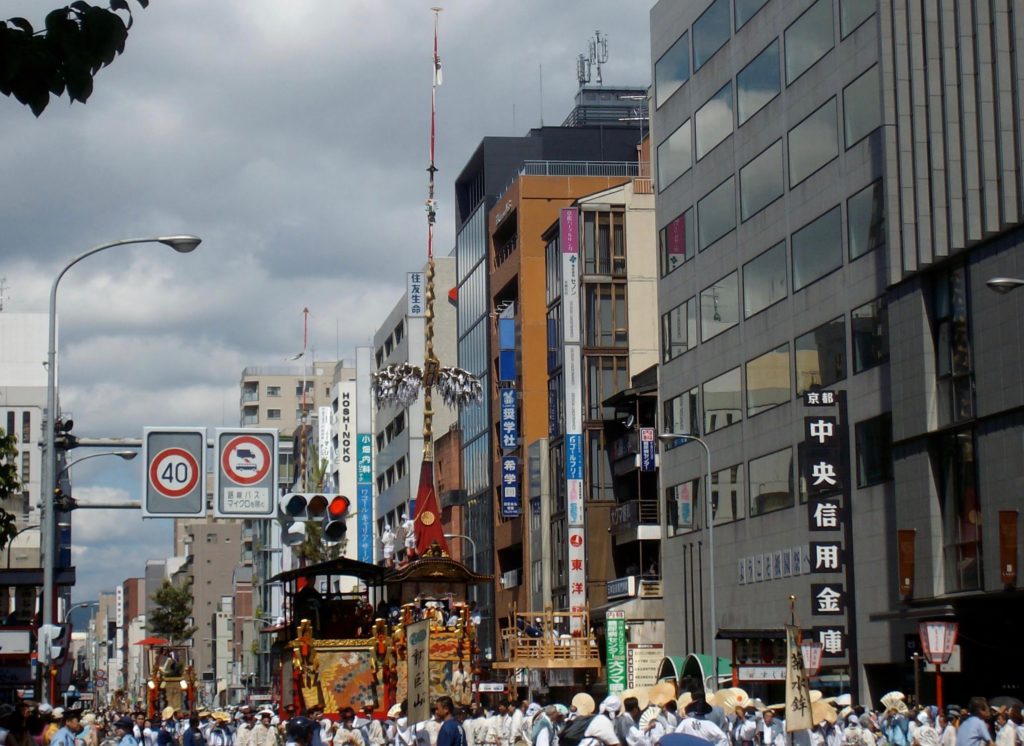 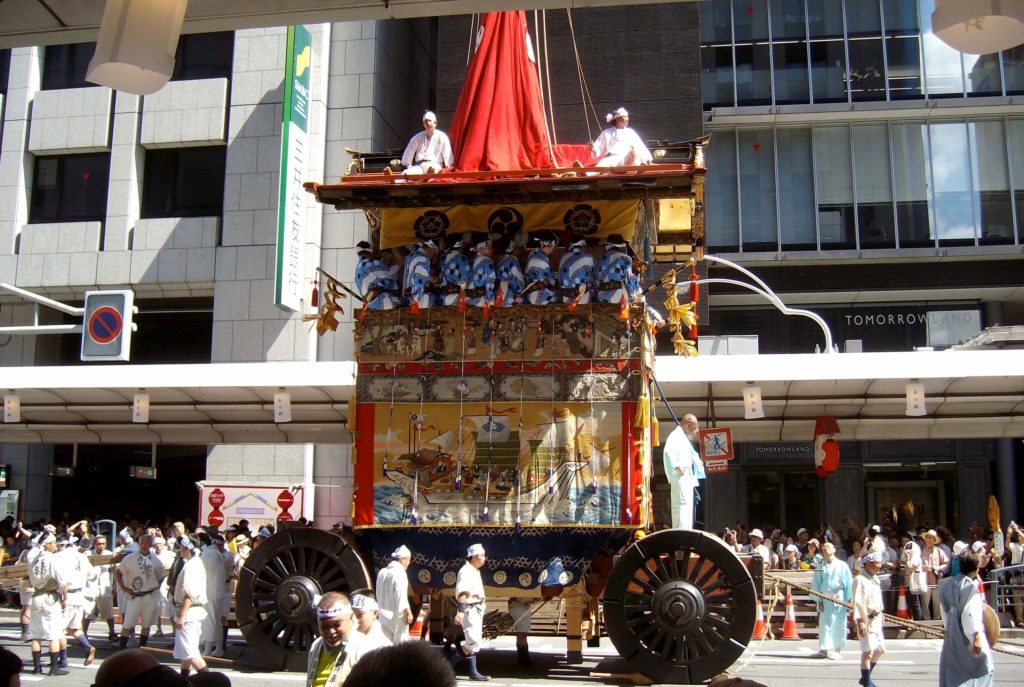 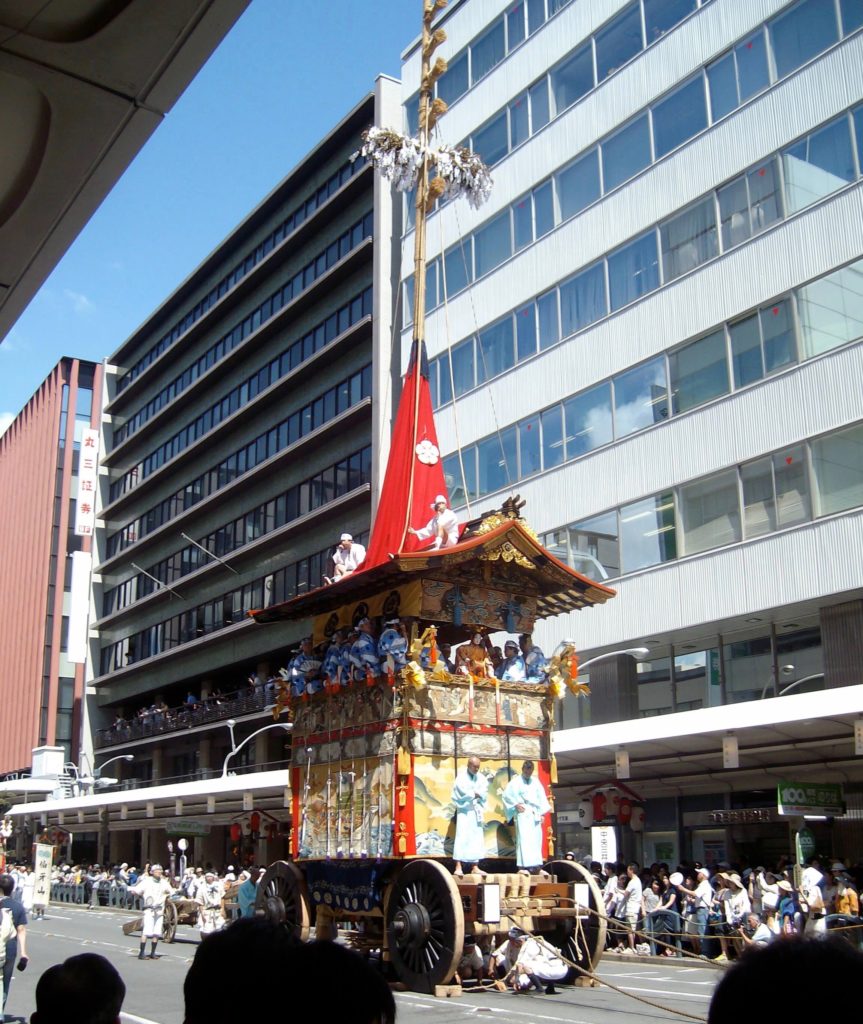 Former England captain John Terry getting in on the action: 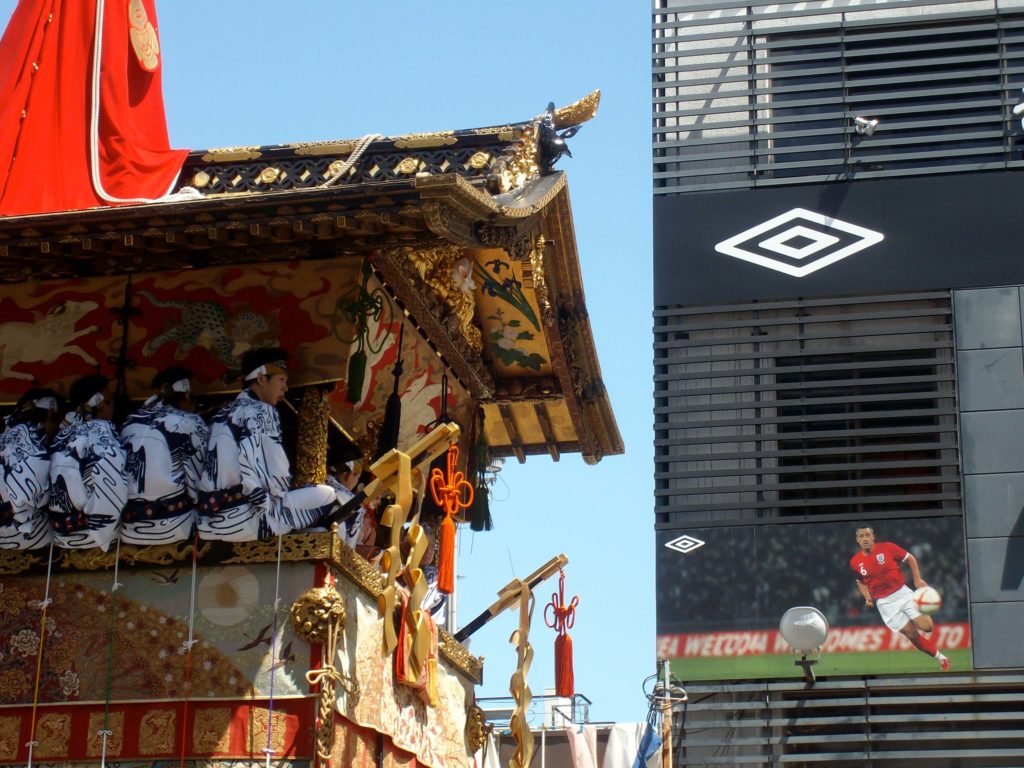 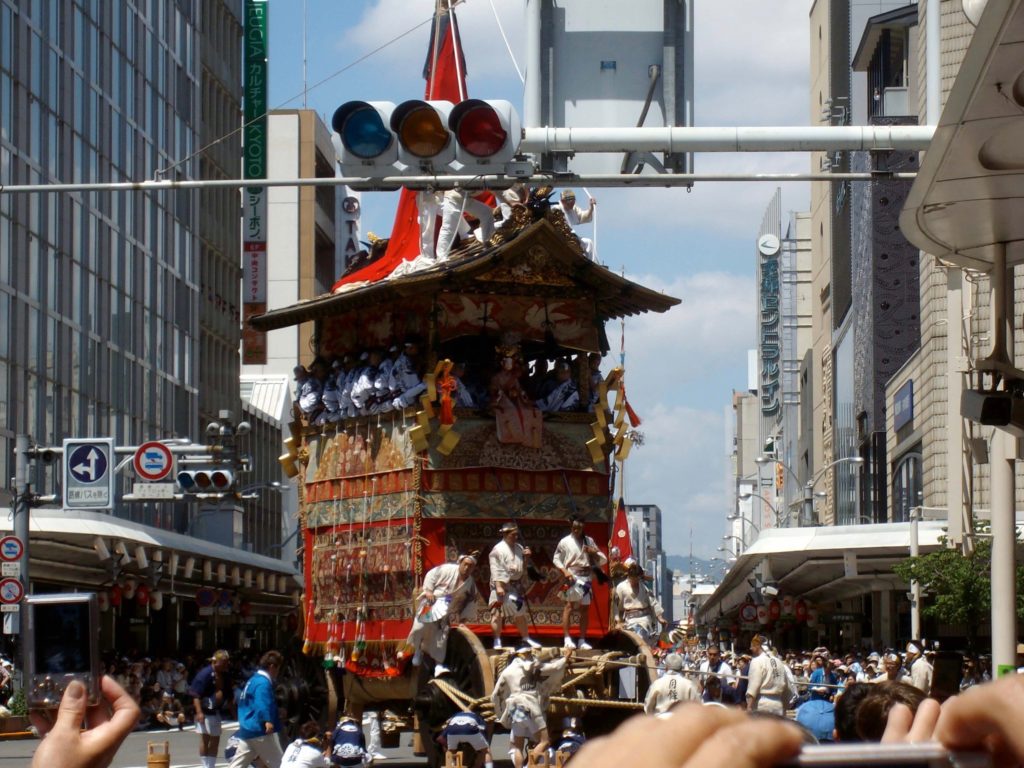 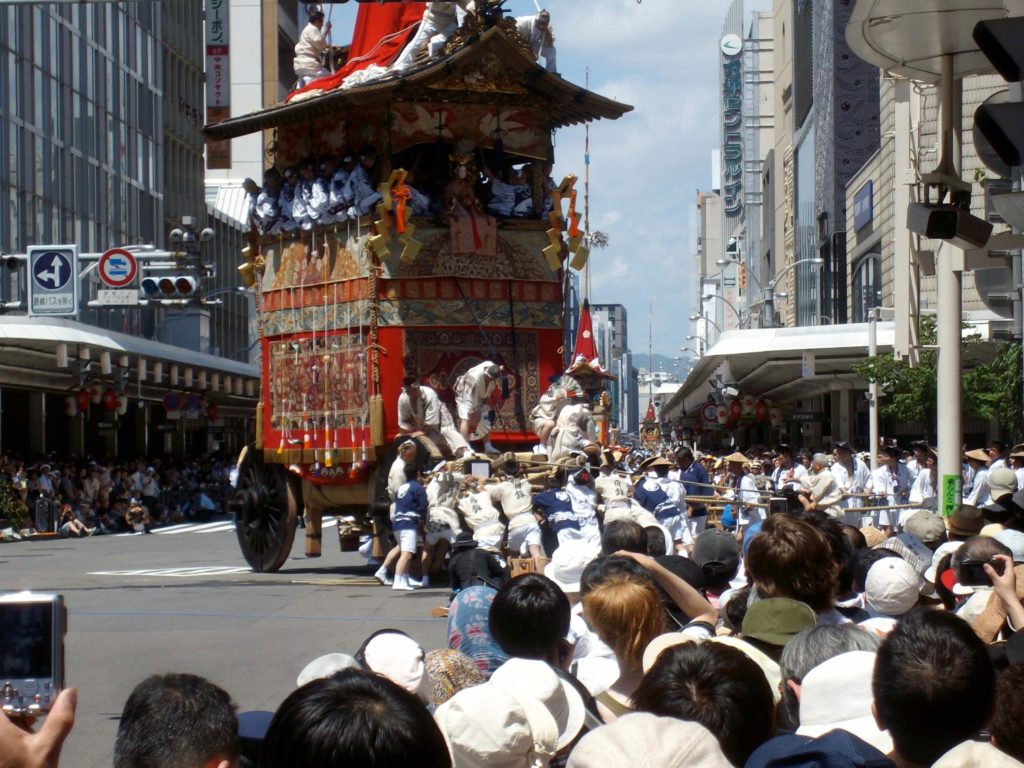 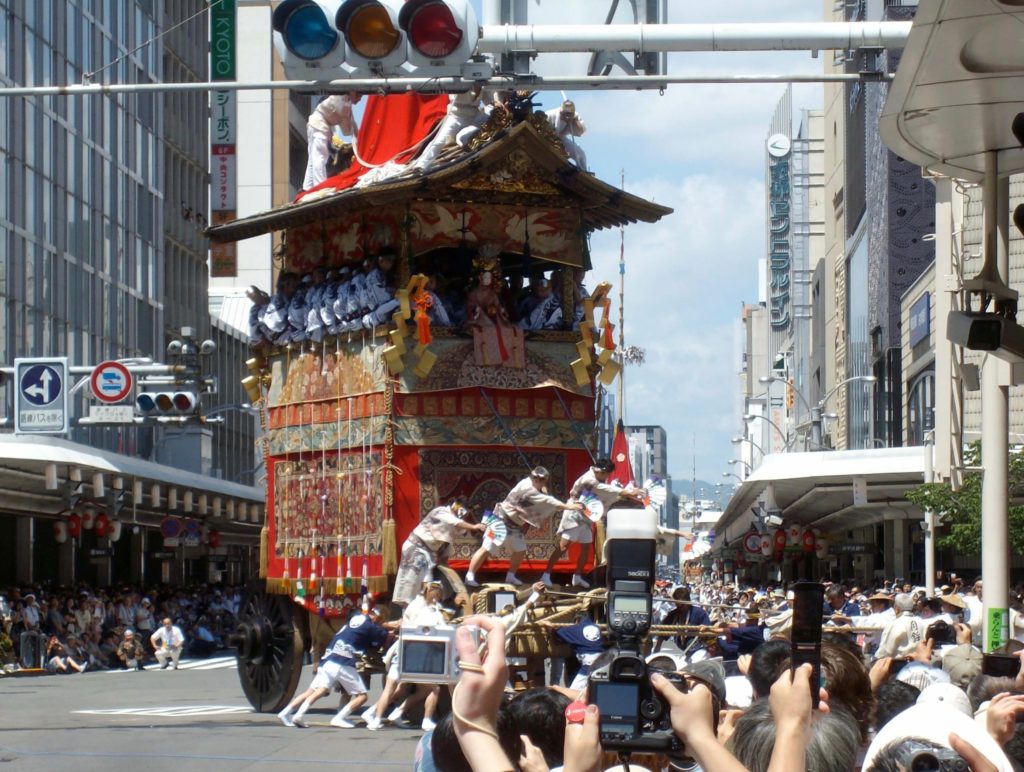 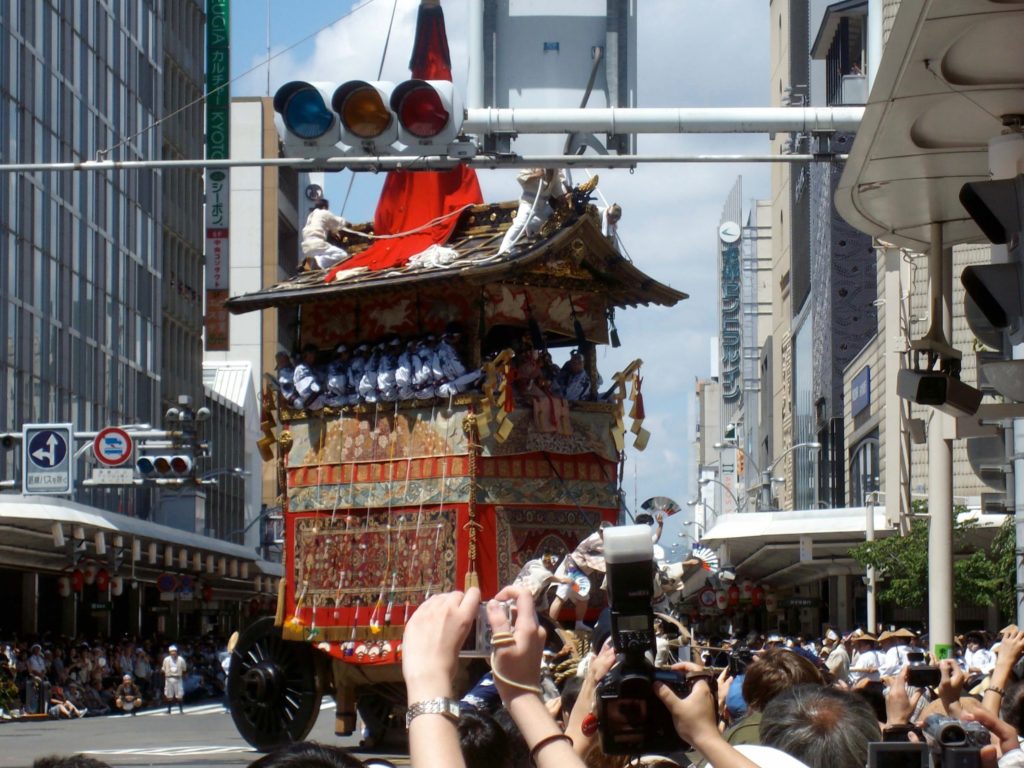 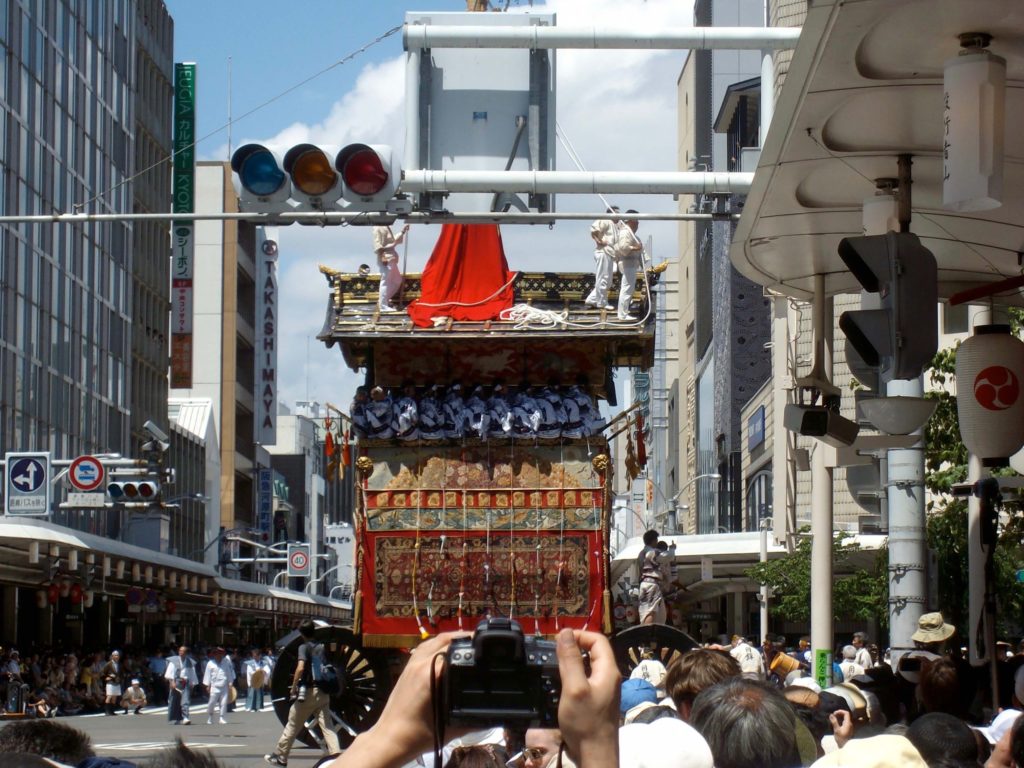 The first corner on the route is the intersection of Shijo-dori and Kawaramachi-dori (directly above Hankyu Kawaramachi Station), and is the place to stand if you want to see the main bit of the action. It’s seriously crowded there though, so it can be hard to get a good spot and you may find yourself jostling to take pics on tiptoe with your camera held up at arm’s length over your head. Also, don’t underestimate the July midday sun – there’s no good cover for the best photo positions in the road, and if you’re not well hydrated and protected with a sun hat and sun lotion you’ll get your ass kicked. It’s alarmingly common to see sunstroke victims being stretchered away.

Be ready for crowds: 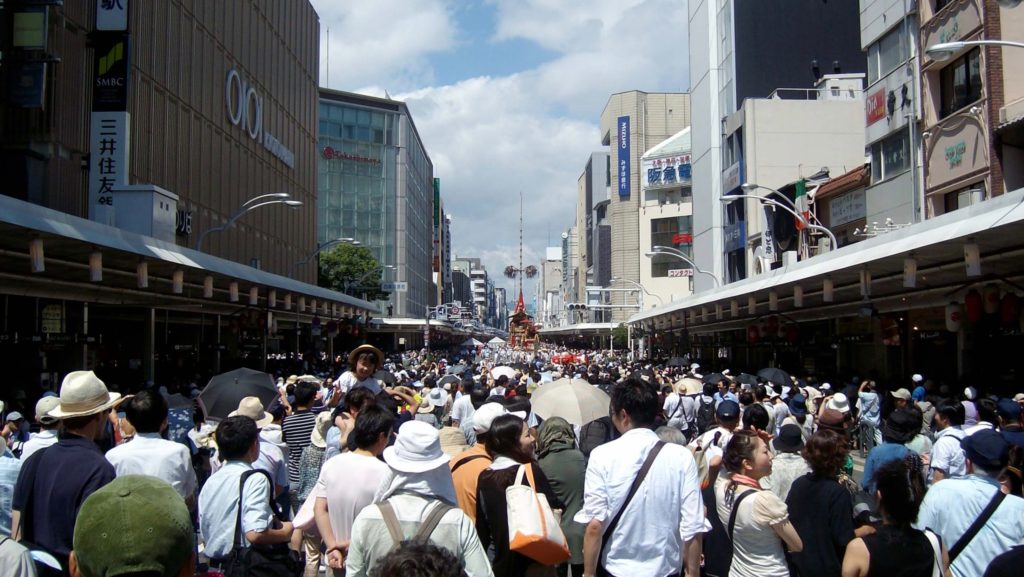 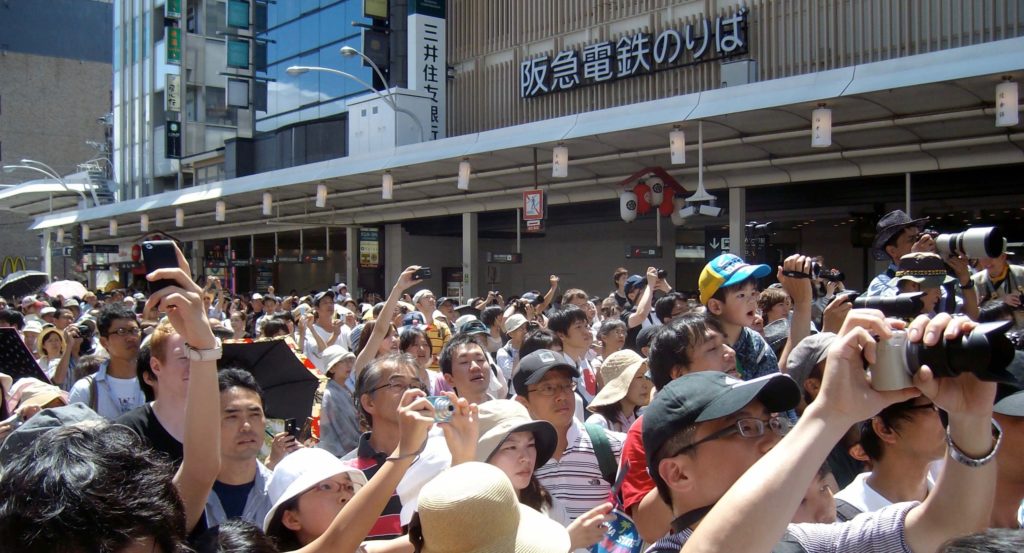 The same maneuver is performed at the intersection of Kawaramachi-dori and Oike-dori and again at Oike-Karasuma, so you can post yourself there to have a bit more space. The atmosphere isn’t quite the same though.

The parade moving up Kawaramachi: 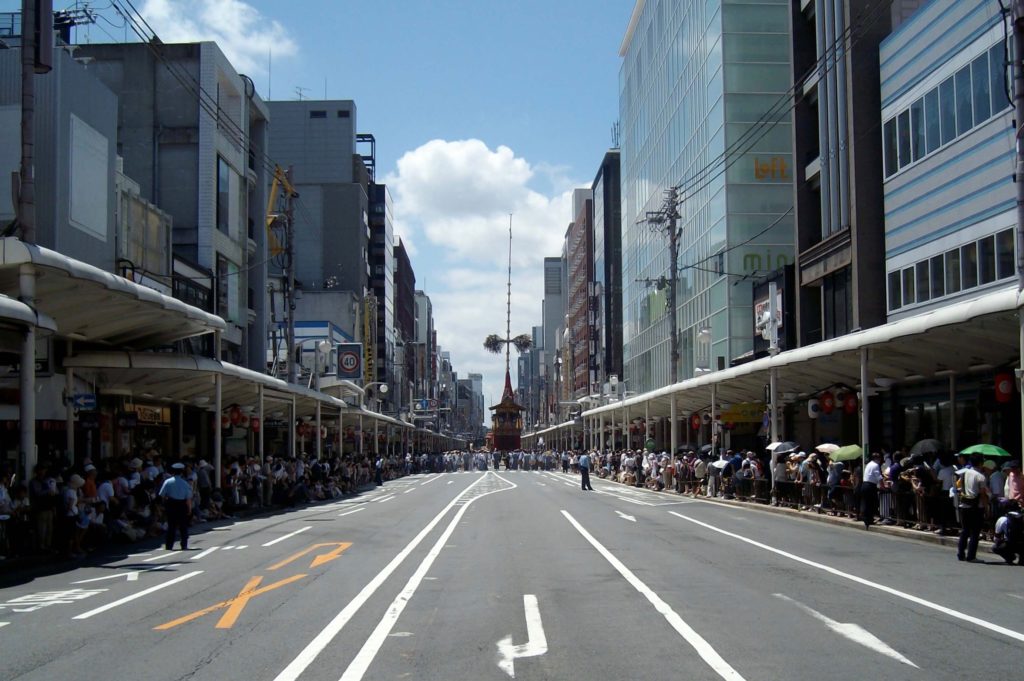 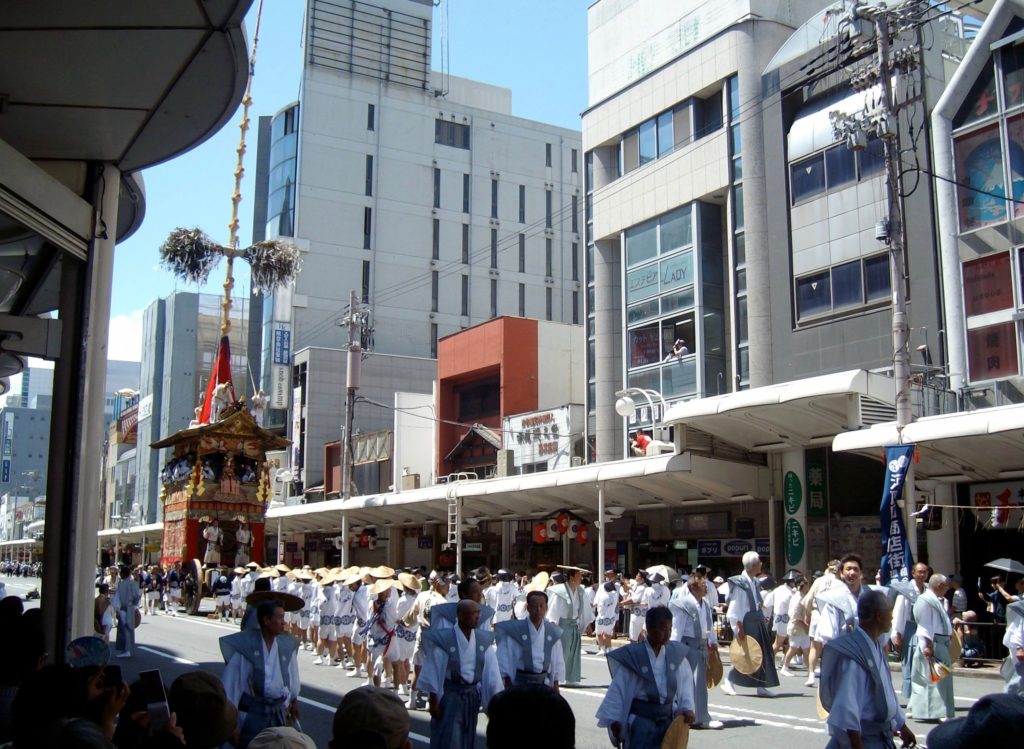 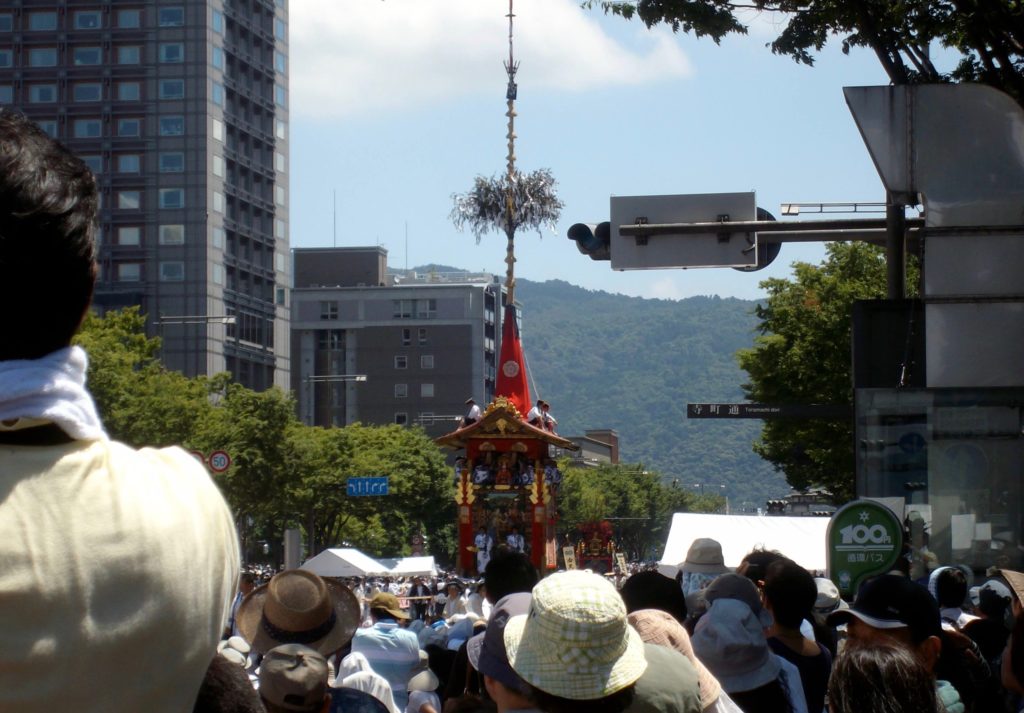 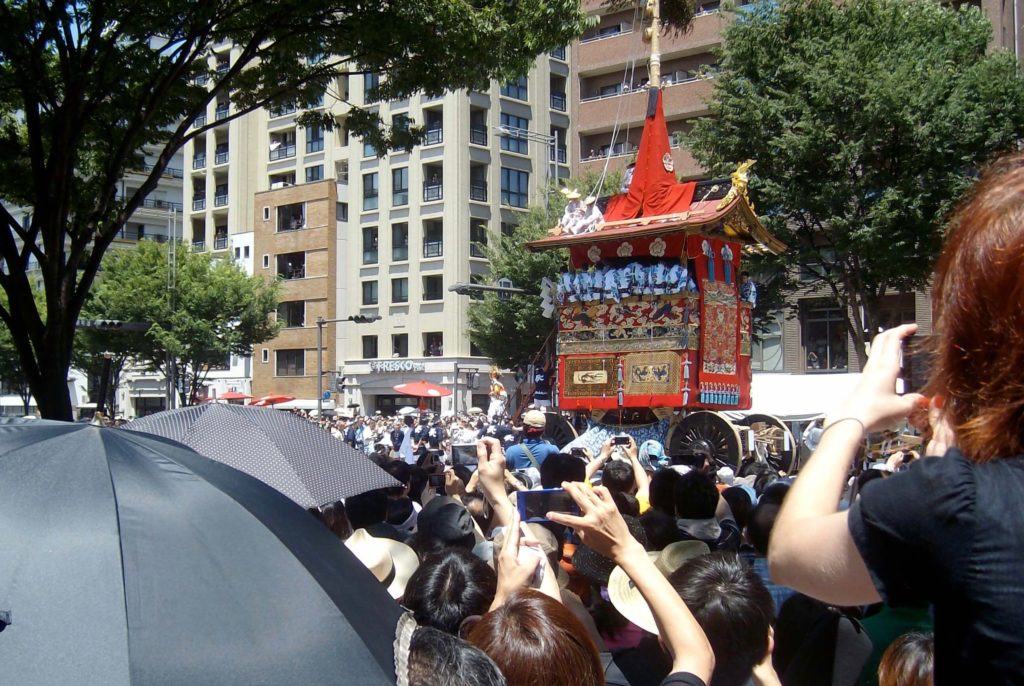 Where to Stay for the Gion Matsuri

If you’re staying in Kyoto, stay wherever you can find an available room you can afford! Search sites like Hotels Combined, and book as far ahead as you can. Demand is through the roof and prices rise accordingly – even the love hotels can bump their prices up to crazy levels (like 200 dollars) and still fill up completely. The best area to stay is obviously somewhere near Gion, if you can find something – search hotels near Gion. The Kyoto Station area isn’t so close to the festival but has a lot of accommodation options, search here

A workable alternative is to stay in Osaka and hop to Kyoto on the train. From Umeda you can ride the Hankyu Line to Kyoto – for yoiyama the Hankyu line’s Karasuma station (the penultimate stop) is perfectly placed and definitely the best route. For the main parade Kawaramachi Station is directly under the intersection where the boko make their first turn. However, be warned that the Hankyu Line is insanely packed on the morning of the parade, and the stations equally so. A more comfortable alternative is to head up to Kyoto on the Keihan Line, getting off at Gion-Shijo from where you just cross Shijo Bridge to reach that first intersection.

If you’re staying near Kyoto Station, or want to use your JR Pass from Osaka, it’s just 2 stops on the Kyoto subway’s green line to Karasuma. However it may actually be easier (in terms of walking to the first intersection once you’re off the train) to take a slightly longer route – take the JR Nara Line one stop from Kyoto Station to Tofukuji Station, where you can switch to the Keihan Line to go 3 stops north to Gion-Shijo and walk over the bridge. This avoids battling the worst of the crowds on Shijo between Karasuma & Kawaramachi.

If you’re going to stay in Osaka, somewhere in or near Umeda (search here) is best for the Hankyu and JR lines. If you stay further south around the Namba/Shinsaibashi area (search here), you can take the Midosuji Line (red subway) to Umeda or get off one stop earlier at Yodoyabashi to switch to the Keihan Line.

Airbnb is also a good call in Kyoto & Osaka. There was a crackdown on unlicensed hosts in 2018 which massively reduced supply (and therefore increased prices), but the dust from that has settled and the listings on there now are all legit. I personally always do Airbnb when I visit Japan these days – if you’ve never used it before, you can get 35 dollars off your first booking if you sign up via this link

Kyoto’s other two great festivals are the Aoi Matsuri (Hollyhock Festival) and Jidai Matsuri (Festival of the Ages), on May 15th and October 22nd respectively. These are both 1-day affairs without all the street party stuff at night, so the thing to do is post yourself somewhere along the route to watch the procession go by.

The Aoi Matsuri is even older than the Gion Matsuri, and involves a serious religious ceremony with the procession in Heian Era (794 to 1185 AD) clothing making its way from the Imperial Palace to Kamigamo Shrine via Shimogamo Shrine, with rituals performed at both shrines. These two shrines are located on the Kamo River (the shrine names literally mean ‘lower Kamo’ and ‘upper Kamo’), and it’s an attractive route along the river through northern Kyoto. It leaves the palace at 10.30 and takes many hours; a good place to see the procession go by is the road along the western bank of the Kamo in the vicinity of Kitaoji Station between the two shrines.

The Jidai Matsuri is a much more recent event (‘only’ dating back to 1895), and is less solemnly religious in nature; it’s more of a celebration of the people of Kyoto through the ages, with the procession composed of groups in period costume for each era dating from the Heian to Meiji eras – one wonders if the economic madness of the 1980s ‘Bubble Era’ will eventually be added, with a drunken gaggle of briefcase-toting salarymen and hostess girls bringing up the rear…

The parade starts from the Imperial Palace and ends at Heian Shrine (the first Jidai Matsuri was held as part of the shrine’s inauguration). My former workplace was on Sanjo-dori, with a balcony directly above the route so we had prime seats (though I don’t have any photos); for everyone else it’s elbow room, and some people get there hours in advance to claim decent spots with portable stools.

Another notable festival in Kyoto is the Gozan Okirubi (5 mountain bonfires), 5 fires lit on the slopes around the city in the form of giant Chinese kanji characters and other symbols on the evening of August 16th to mark the end of the O-bon holiday period. These fires are to help guide visiting spirits back to the other side; the most prominent is the 大 character on Daimonji-yama behind the Silver Temple; more on that here.

There are also many smaller festivals like the fire festival on Mt Atago and the ogre-blocking bean throwing for Setsubun-no-hi.

For more Kyoto posts see here, and check out my quick guide to Kyoto

For more Japan posts see here, and check out my Japan travel guide