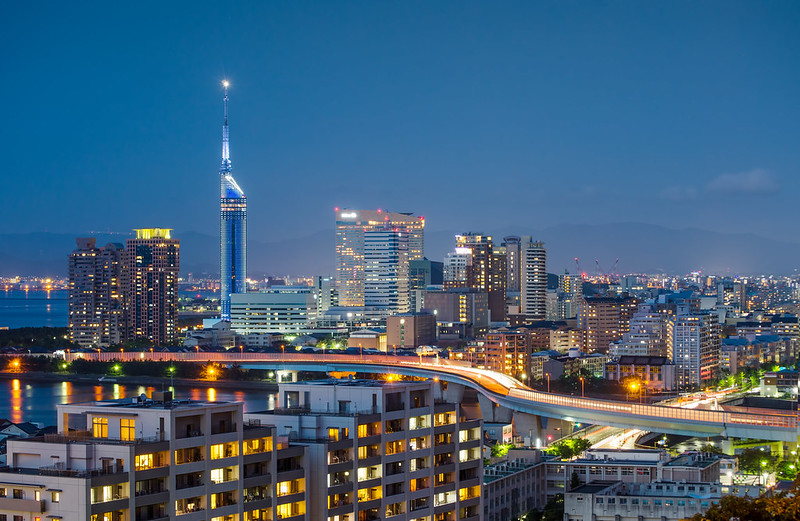 This page originally appeared on my Rugby Guide Japan website, providing information for rugby fans attending 2019 Rugby World Cup matches at Level 5 Stadium. It may still be useful for future visitors to Fukuoka, so I’ve moved it here after taking the rugby site down.

If you want to take the ferry to/from Korea, see here

Where to Stay in Fukuoka

Use Hotels Combined to search all the online booking platforms for Japanese accommodation, here are some links for the best areas to stay:

To be closest to nightlife & shopping, search for accommodation near Tenjin (this search will also show the area around Nakasu Kawabata Station which is one subway stop from Tenjin and also a good area to stay)

The Hakata Station area is best for access using intercity trains, and conveniently located halfway between the Tenjin area and the airport/stadium area.

Staying near Fukuoka Airport (search here) is obviously handy if you’re flying, and it’s still super easy & fast to go downtown from there on the subway. 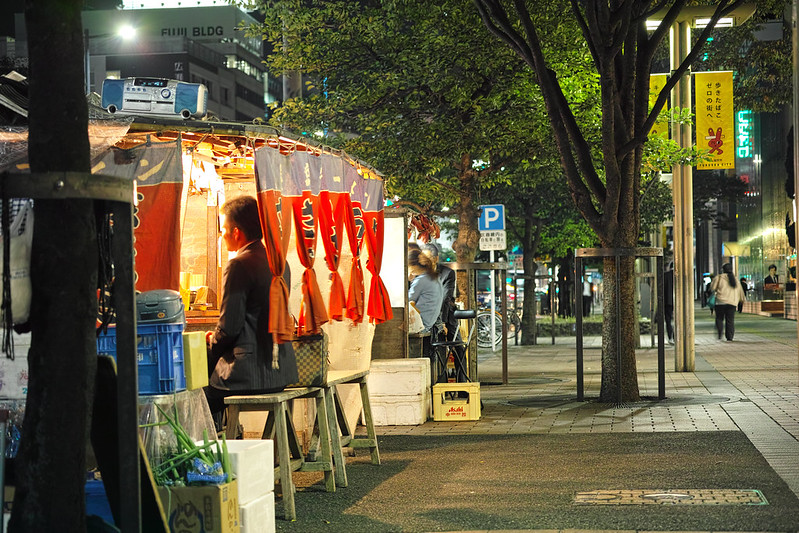 The subway system is all you’re likely to need in Fukuoka for most sightseeing, shopping, or partying purposes. All IC cards are accepted on the subway, and also on the buses should you ride one. If you get an IC card in Fukuoka it’ll be Sugoka (from JR) or Hayakaken (from subway stations), but if you have a Suica/Pasmo/Icoca etc from Osaka or Tokyo that works too. For more on IC cards see here.

Things to Do in Fukuoka

Ramen: it may seem odd to list a single dish here, but Hakata ramen really is Fukuoka’s greatest claim to fame. It’s tonkotsu-style, meaning a heavy, creamy pork bone broth, with a much thinner variety of noodles compared to most ramen. Personally it isn’t my favourite ramen style (I’m a Sapporo man), but what I do really love is the ramen tents where you go to eat it. These are called yatai, and are basically street stalls serving cheap, quality ramen to late night revellers (and those making their way home in the morning), hungry lunchtime office workers, and every single Japanese person who ever visits Fukuoka from another city. Street food isn’t as common in Japan as in neighbouring countries, with yatai generally only popping up during festivals – Fukuoka’s a special case with yatai in business every day, bringing with them a street scene you don’t really get elsewhere in Japan. They serve beer too (and the food isn’t limited to ramen – yakitori grilled chicken skewers are also popular), and are a great place to get chatting with the locals/domestic Japanese tourists. Take a wander and you’ll find some, especially near the nightlife & shopping hubs in Tenjin & Nakasu; the southern end of Nakasu island (a large island in the river) has a famous row of yatai along Nakagawa-dori, just over the bridge from Canal City or a 10-minute walk from Nakasukawabata Station.

Canal City: I’m not one to get excited about shopping malls, but Canal City (see here) is pretty cool architecturally and is a decent place to kill a few hours if you’re at a loose end or the weather’s not great. Closest station is Gion (10-minute walk), or it’s about 15 minutes’ walk from Hakata or Tenjin stations. If you cross the bridge in front of Canal City to Nakasu Island you can visit the row of ramen yatai on Nakagawa-dori (see above).

Fukuoka Tower & Momochi Beach: Fukuoka’s tallest building, Fukuoka Tower (see here) has an observation deck on the top floor with views of the city and its surroundings of sea & mountains. The tower stands next to Momochihama (Momochi Beach), an artificial but attractive beach, and the whole waterfront development is called Seaside Momochi (see here). It’s a 20-minute walk from Nishijin Station, or a 20-minute bus ride from Tenjin (or 30 minutes from Hakata).

Nightlife: the main nightlife hubs are on Nakasu around Nakasukawabata Station, and the Oyafuko area of Oyafuko-dori & Tenjin Nishi-dori streets (actually the same street). The Nakasu nightlife mostly consists of hostess bars for stressed out salarymen and isn’t a great option for thirsty foreigners (most hostess places won’t even consider letting you in unless you speak good Japanese), though it’s still a good area for a wander and has the famous row of yatai as noted above.

To actually get your drink on, you’re looking for Oyafuko just to the west of Tenjin Station. There’s a whole bunch of bars along the street, plus a handful of clubs. The Happy Cock just off Tenjin Nishi-dori is the obvious place to aim for, a packed & loud club on the upper floors of a random-looking building with all-you-can-drink included in the entry fee (usually 3000 yen for men or 2500 for women). If you’re more looking for quieter bars or a range of ales, Oyafuko-dori (the bit of the strip to the north of the main road) is a better bet. There’s a list of bars & clubs here.

Any questions about Fukuoka? Give me a shout below and I’ll get back to you.

Click the banner to pre-order your JR Pass and save 40 dollars, or see my JR Pass guide for more info: