Estonia is a small Baltic country located just across the Gulf of Finland from Helsinki, and just on the doorstep of the big bad Russian Bear to the east. In recent decades Estonia has gone from being one of the constituent Soviet Republics of the USSR to being a modern European democracy and EU member. Despite its small size, Estonia has been making waves in the tech world – this is the country that gave us Skype, something that I for one can no longer imagine living without! Tallinn’s old town is picture perfect, and it’s easy to visit Estonia as part of a trip through the Baltics or from Finland (or both): 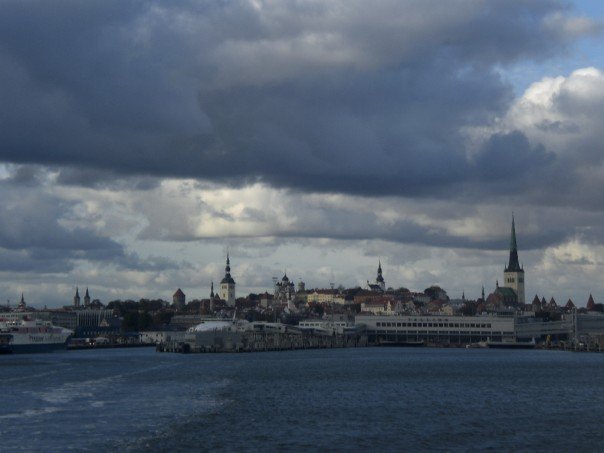 Tallinn as seen from the ferry to Helsinki

Travel to, from, and within Estonia overland

Estonia has a well-developed road network, and a limited domestic rail network that serves its major towns and cities. Both can be used to travel around Estonia, though travel times are better by road.

In terms of international overlanding, Estonia’s railway was originally part of the Soviet Union’s rail network which connected the Baltic republics to Moscow at the centre of the web. Services still run to St Petersburg and Moscow, making Tallinn a possible starting point for a Trans-Siberian journey; but there are no international through services to Latvia, or between the Baltic States and the rest of the EU as Soviet railways were built with a wider gauge than those in most of Europe. The existing Baltic railways are incompatible with those in Poland, Germany, and beyond, though this will change in the not-too-distant future thanks to the Rail Baltica plan. Until then, Estonia to Latvia can be done by rail using local domestic services and changing trains at the border (as described on the excellent Seat61), but the bus is faster. The Baltic states are also not included in the Interrail system (likely due to the gauge difference), so unless you’re a train enthusiast the bus is the better option to / from Latvia.

Looking the other way to Scandinavia, there are frequent ferries plying the short crossing to Helsinki (including high speed hydrofoils which do it in just 90 minutes) which you can book online here and daily (overnight) sailings to Stockholm, Sweden (see here). There’s also a long (62-hour) cruise option to St Petersburg (see here).

As a member of the Schengen Area, border crossings aren’t something you have to think about much when overlanding between Estonia and Latvia, or going by sea to Scandinavia. Russia is another matter altogether, and if you want to take the train to St Petersburg or Moscow you need to have your Russian visa sorted before leaving your country of residence.

Things to do in Tallinn

Explore the old town – one of Europe’s best, and I found it to be the most charming old town of the three Baltic capitals.

Eat and drink – the food is hearty, the alcohol cheap. Finns often head over to Tallinn to take advantage of the lower prices and get sloshed on cheap(er) vodka, and you can do the same! (Though I understand that prices have risen somewhat since I was there)

Official websites for the Interrail pass & Eurail pass (not valid in the Baltics, but still useful for reaching the Baltics)

Search for hotel deals in Estonia