When I was a kid, Bulgaria was one of those dark & forbidding places shut away behind the Iron Curtain; but these days it’s an EU member, one of the up-and-coming countries of Eastern Europe – and one of the continent’s best ski destinations on a budget. It was the skiing (in Bansko) that took me there on my one and only visit to Bulgaria to date.

Travel to, from, and within Bulgaria overland 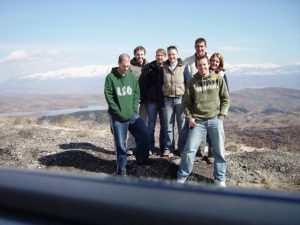 Near the Bulgaria / Macedonia border

Bulgaria’s rail network covers the main points of the country, and has international connections to Serbia, Romania, Greece, and Turkey, so an Interrail pass is a good way to travel to Bulgaria overland as part of a wider European trip. However, it’s not exactly high speed rail and it’s actually faster to go by road (though a high speed rail line is planned), so you might want to take the bus. As we went to Bulgaria to ski, we just flew in and out of Sofia, with a bus transfer to Bansko… however, the mountain was closed for two days that week due to extreme winds, so we did get in some unplanned overlanding using rental cars – a drive down to the Greek border (but not across as Bulgaria was not yet in the EU and we hadn’t thought to take our passports that day) with a visit to a spooky little hilltop monastery, and then a drive over to neighbouring Macedonia (this time with passports) to have a look around. We didn’t see much as we had to leave the cars at the border and take taxis to the nearest town (Delchevo), but it was fun to check it out and get some lunch there. 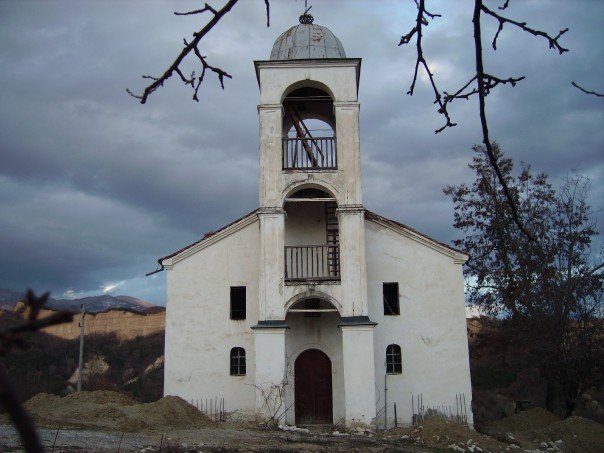 As one of the newest EU member states Bulgaria isn’t yet officially part of the Schengen zone, but will be in the near future and has an interim arrangement in place. Overlanding through Bulgaria should be straightforward for most, but if you’re from a country that requires a Schengen visa do make sure to check exactly what the present situation is for your passport.

Romania, immediately north, is in the same boat as Bulgaria regarding Schengen; and Greece, to the south, is a fully-fledged Schengen member. However, Bulgaria’s other immediate neighbours – Serbia, Macedonia, and Turkey – are not (yet) in either the EU or Schengen, so you need to check the border requirements on a case by case basis. 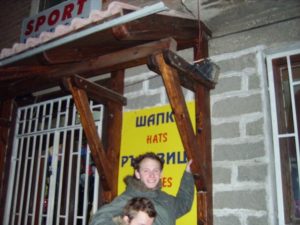 The Bulgarian word for hats is shapka, written шапка in Cyrillic, which is rather amusing if you’re a group of drunken snowboarders

Things to do in Bulgaria

Eat, drink and be merry – Bulgaria’s механа (mehana, traditional taverns) are the Balkan version of a traditional British pub, with log fires and hearty food – but a hell of a lot cheaper.

Check out a spooky hilltop monastery or two

Search for hotel deals in Bulgaria

My review of Bansko ski resort.

Seat 61 has the details on London to Bulgaria by train 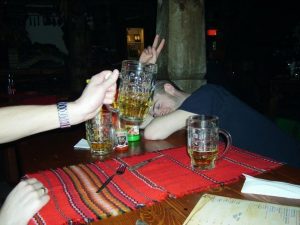 After a few too many in the mehana

(This page contains affiliate links i.e. if you follow the links from this page to Interrail, Eurail, Amazon, or World Nomads and make a purchase, 4corners7seas will receive a commission from them. This commission comes out of their profit margin at no extra cost to you. I’m recommending these products because they’re awesome, and thank you in advance should you choose to purchase them via the above links)