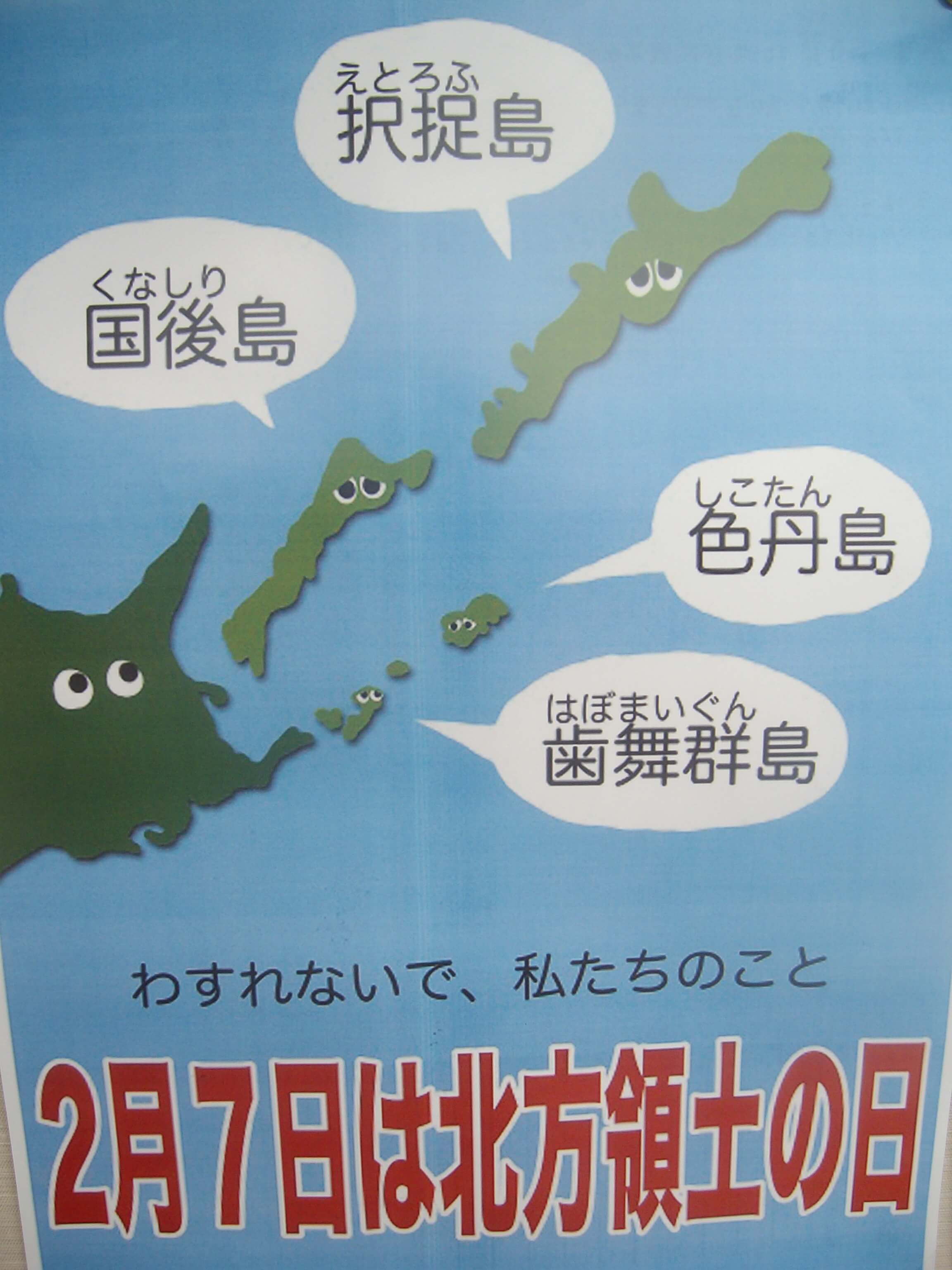 Hokkaido’s remote Shiretoko Peninsula in the far northeastern corner of Japan was a place I’d wanted to go ever since I spent a ski season in Sapporo. At the time I’d made a trip out that way to Abashiri (famous for its once-notorious prison) and taken an ice-breaker cruise out on the frozen Sea of Okhotsk, but the Shiretoko Peninsula is largely closed off in winter so I hadn’t been able to visit.

It was a neat little trip anyway, the icebreaker cruise in particular: 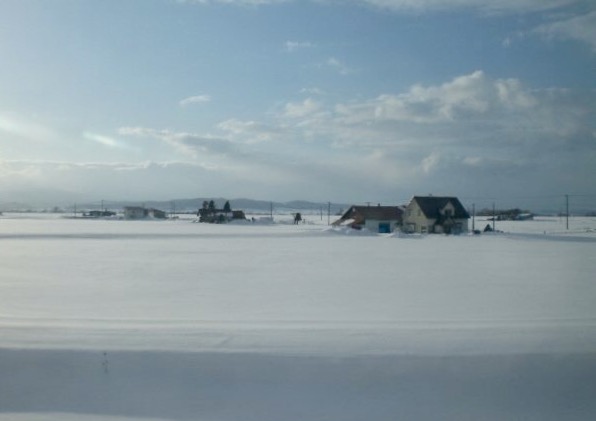 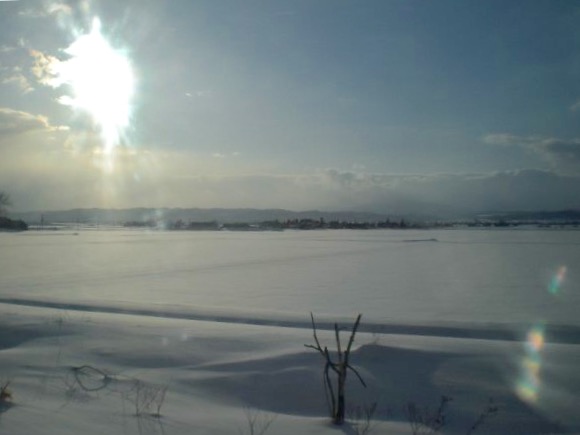 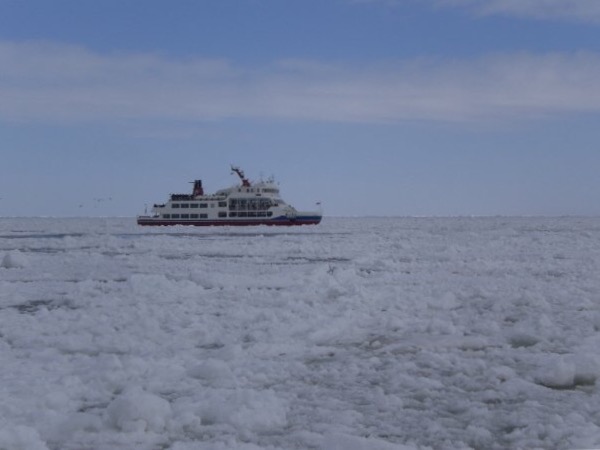 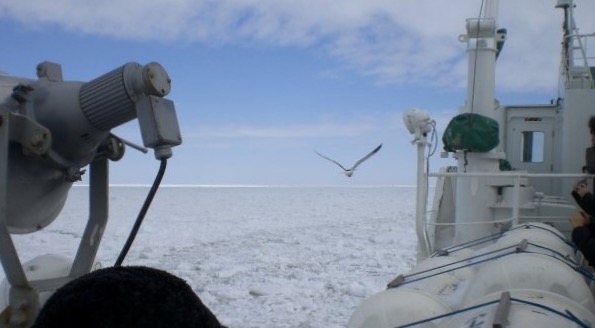 But having not visited Shiretoko at that time, I wanted to go back to northeast Hokkaido again in summer to see the peninsula, and even more so to catch a glimpse of the controversial Kuril Islands.

This island group, consisting of Kunashiri, Eterofu, Shikotan, and the Habomai Islets, was taken from Japan by the USSR at the end of WWII, and is still claimed by Japan as its Northern Territories.

I’m not getting into the whole history lesson and debate surrounding the rival claims, but history has seen the Kuril Islands (and Sakhalin, directly north of Hokkaido) change hands a number of times – you can read a full explanation of all the changes of possession here.

For me as a traveller with a close interest in Japan & Russia, these islands have always had a certain allure. I doubt I’ll ever go there due to the effort involved – they’re not off-limits, but due to the lack of regular transportation from the rest of Russia and the absence of any transportation from Hokkaido, they’re quite time-consuming and expensive to get to (they’re administered from Sakhalin, and to get there you have to go via Sakhalin by irregular light aircraft flights or long ferry crossings)

But you can see them easily from Hokkaido’s east coast on clear days – from the Nemuro area’s Nosappu Cape you can see the nearby Habomai Islets and Kunashiri, and from the east side of Shiretoko you can also see Kunashiri.

So, when I was leaving Japan a couple of years ago and thinking that I may never be back, or at least not for a long time (incorrectly – I’m tapping this out on my iPhone while sat on the bank of the Kamo River in Kyoto!), I finally made the trip up to Shiretoko.

It’s a pretty long way from Tokyo – I broke the journey with a visit to Sendai & Ishinomaki (where I’d volunteered after the 2011 tsunami) to see friends and see how the reconstruction was going, and then took the overnight ferry from there to Hokkaido and finally a 7-hour train across Hokkaido to the town of Shiretoko Shari.

This town is a short bus ride (one hour) from the peninsula’s main town of Utoro, and is the closest you can get by train. If you’re keen to properly explore Shiretoko, it’s better to stay on the peninsula itself in Utoro (west coast) or Rausu (east coast); but I was rushing it and decided to base myself in Shari for 2 nights and just make a day trip over to Rausu from there.

The bus schedules for this (changing in Utoro) gave me half a day in Rausu; I was hoping to jump on a whale watching cruise (pods of orcas are frequently seen), but the schedule doesn’t work – if you want to whale watch, you need to stay in Rausu at least one night or Utoro for 2 nights (you can do it as a day trip from there, but not Shari).

So with whale watching out, I simply hiked up to the Rausu Kunashiri Observatory to try and catch a glimpse of Kunashiri. It wasn’t looking promising, with a dense fog rolling in off the sea; conditions on the west coast were clear that morning and the views were lovely going over the Shiretoko Pass, but on the east side Rausu was completely enveloped. There was little for it though other than to hike to the viewpoint anyway and hope to see something.

It takes about 45 minutes to hike up the road from Rausu’s main street, I’m not sure if there’s a hiking trail but the road’s fine (it’s just an access road, so very few cars). Perhaps halfway up I heard the thrashing and crashing of something big coming up through the undergrowth on the slope next to the road… as Shiretoko is serious bear country, home to enormous Ussuri bears as well as the slightly less massive Asian black bear, I cacked my pants and legged it away up the road before it emerged (bear attacks are increasingly an issue in Japan). Looking back, I watched and breathed a sigh of relief as a deer hopped over the crash barrier onto the road; she froze when she saw me, and as I was slowly pulling out my camera and framing the shot, she bolted back the way she’d come.

Feeling bad for her wasted effort, I continued on up to the observatory, where I gazed out over an empty void, an impenetrable sea of fog. Quite funny really, going all that way to look at Kunashiri and then not be able to see it! Should you also be weird enough to want to visit Shiretoko in order to see the Kurils, I’d advise having a flexible schedule and being ready to stop in Rausu for a few days – foggy conditions are common up there.

So I gave up and entered the observatory’s museum, which gives the history in some detail, stating the basis for Japan’s ongoing claim: 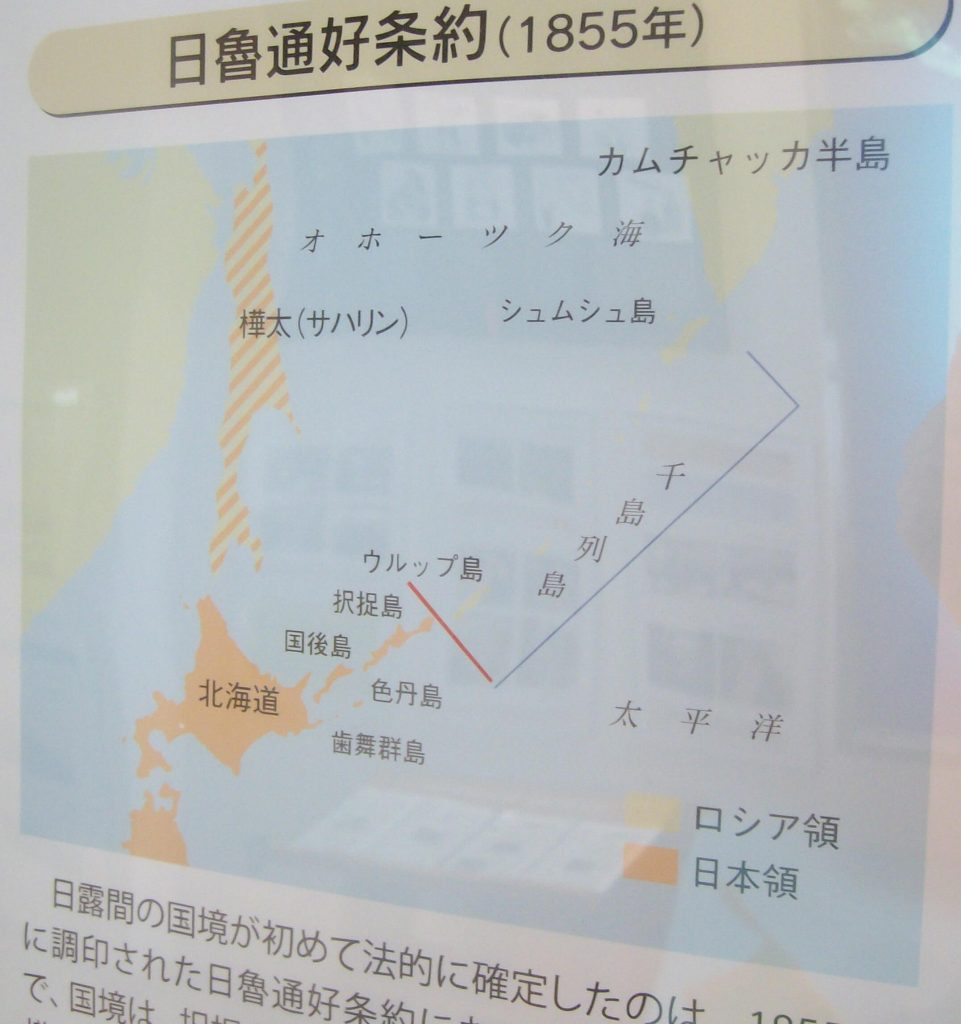 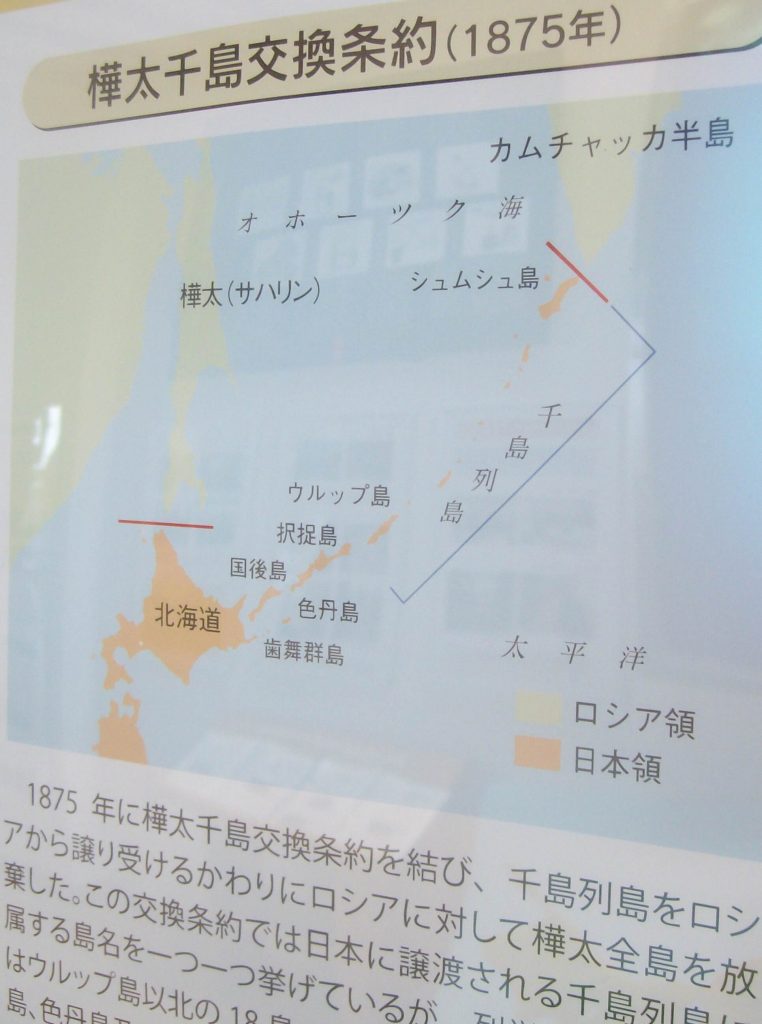 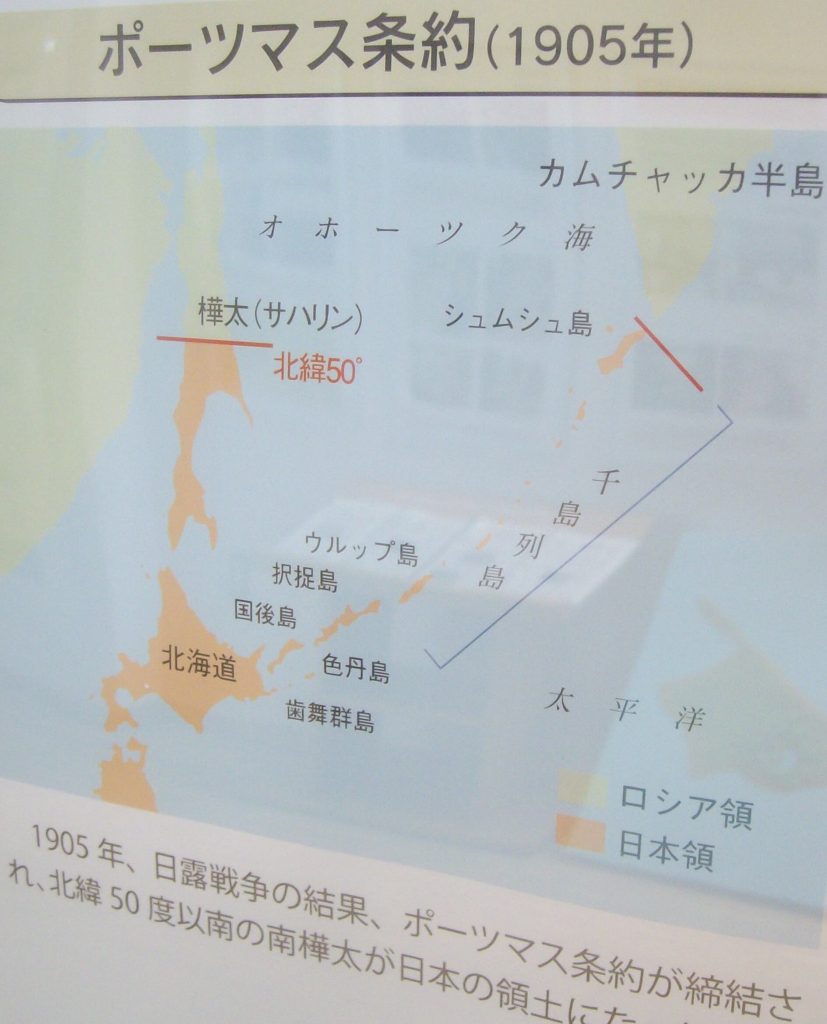 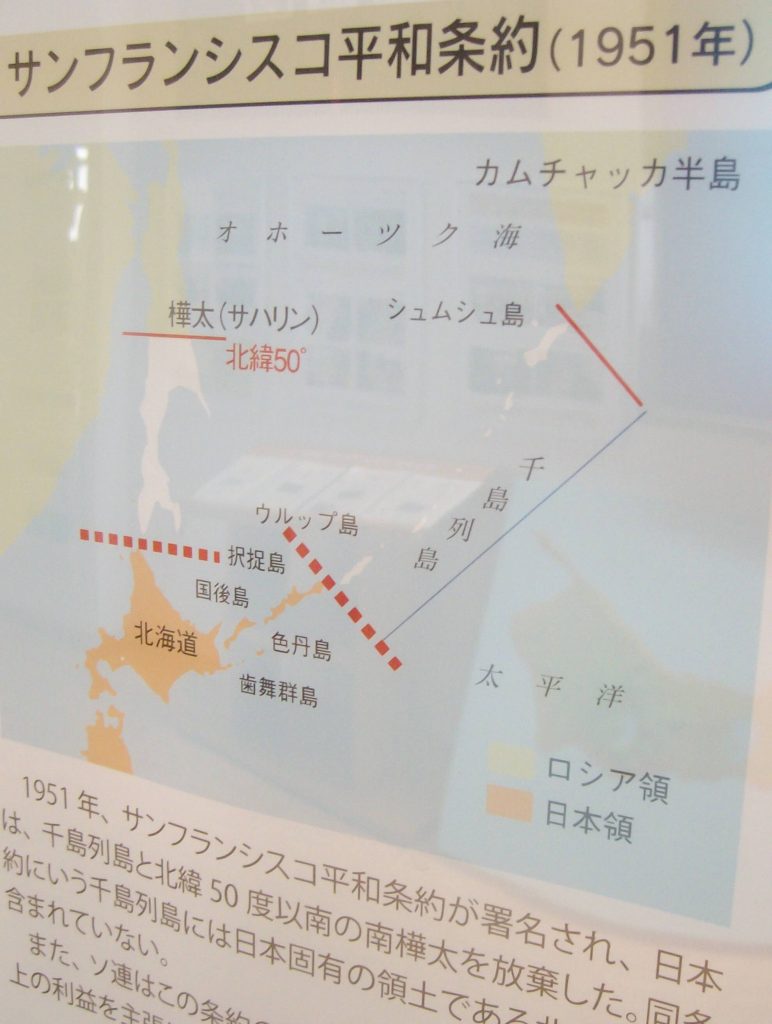 …they also have a bunch of propaganda displays like this (outstanding Engrish fail on the first one): 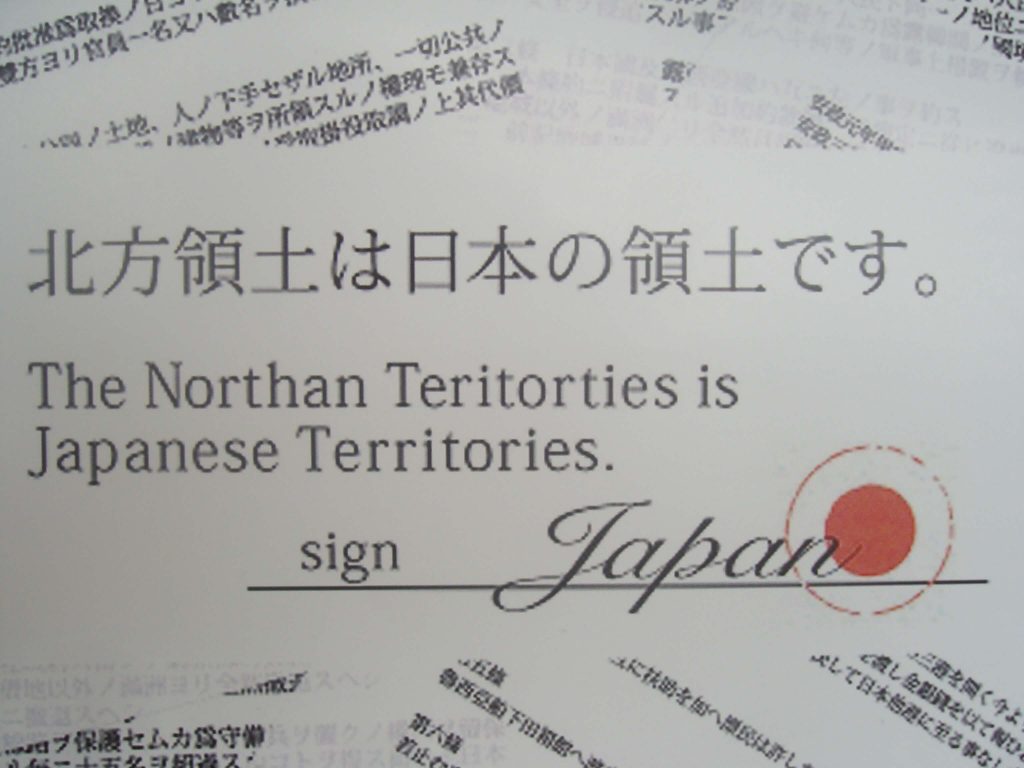 It’s all pretty interesting if you’re into your history & politics, but what I really wanted was to catch a glimpse of Kunashiri, so I went back up on the roof for as long as I could before needing to head down for the last bus.

And just as I was about to do so, the fog suddenly started shifting, revealing a peak here and a peak there as it rolled by; watching for 10 minutes or so, I got a good look at the overall outline of Kunashiri, though my photos are all terrible with only one point ever visible at a time, and the clouds closing just as fast as they opened. These are the best couple:

So, as you can see, I didn’t see it very clearly at all! But I did see something at least. And I was struck by how close it really is to Hokkaido; you’d be across in twenty minutes with a speedboat, if not for the fact the Russian navy would sink you first!

It really is a case of ‘so near, yet so far’. Given that ten thousand Russians now call Eterofu and Kunashiri their homes of 3 generations and counting, it seems unlikely that they’ll ever be Japanese territory again – there are very few Japanese remaining who ever lived there, and very few who would want to live there now even if they could. The return of the unpopulated Shikotan and Habomai was proposed by Russia some years ago in exchange for Japan dropping its claim to Eterofu and Kunashiri, but this was rejected by Japan. Seems to me that’s the best offer they’ll ever get, though.

Who knows, it may yet happen – if it does I’d expect a regular ferry service would then start from Hokkaido, so perhaps in future it will be possible for travellers to visit these remote Russian-held islands from Hokkaido.

Until such a time, you’ll have to either make do with looking from afar, or actually go and visit them from Sakhalin.

( (update: not any more); there are also daily flights between Sapporo and Sakhalin)

Any questions or comments about the Shiretoko Peninsula or the Kuril Islands? Give me a shout below!

With the recent extension of the shinkansen system to Hokkaido, it’s easier than ever to get to Shiretoko overland. Click the banner to pre-order a JR Pass for a 40-dollar saving:

For more posts on Japan, click here; check out my quick guide to Sapporo here