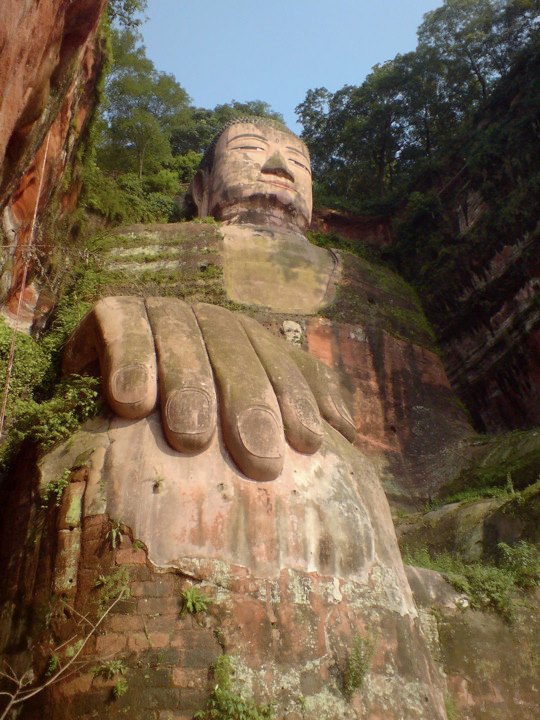 The Great Buddha of Leshan in China‘s Sichuan province is one of the largest statues in the world, 71 metres tall, and the largest stone Buddha. It can easily be visited as a day-trip from the nearby city of Chengdu, especially since the opening of the high speed rail line connecting the two cities; however, I was actually staying in the city of Leshan (乐山) for a few days while extending my tourist visa at the Leshan PSB (Public Security Bureau, 公安局, gonganju) i.e. the police. The Leshan PSB is known for being the easiest & friendliest PSB at which to extend your visa – this was certainly true in my experience.

So on my first full day, after visiting the PSB in the morning and submitting my documents to apply for the visa extension, I took the bus over to the Big Buddha in the afternoon. Visiting the PSB is usually something to dread – a week or so earlier I’d made the mistake of attempting an extension at the big PSB office near the Lama Temple in Beijing, which was a soul-destroying, hair-tearingly tedious (and futile) experience – but the Leshan PSB lived up to its reputation for friendliness. The officers there even smiled, which was quite astonishing. By contrast, the visit to the Buddha, itself so composed and serene, turned out to be rather stressful; an awful lot of people were visiting that day (this was during the Chinese holidays, and to get from Beijing to Sichuan I’d endured this journey), and as is often the case in China a certain proportion of them weren’t exactly watching out for others or being very patient or polite about things. 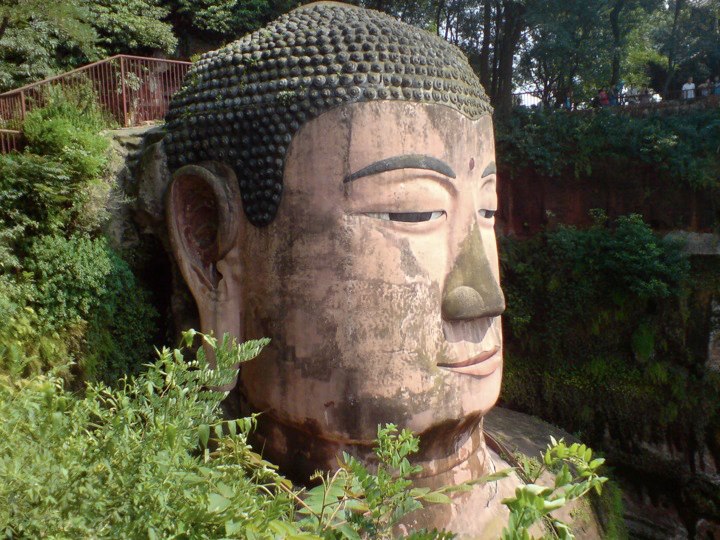 Such is life in China in the early 21st Century – queues are made to be pushed in front of, space exists to be filled (and if you leave any that’s your own fault), and others are often treated as inconvenient obstacles rather than people. Crowds can be stressful, and some of the people in them can be total bastards; but generally speaking this is merely tedious and annoying, something to either be put up with or perhaps to join in with (if you can’t beat them join them, fight fire with fire, etc). It isn’t usually dangerous though; but when people are being selfish morons on a narrow staircase carved into the side of a vertical cliff-face with a raging river far below, things get pretty sketchy!

And that’s how you approach the Leshan Big Buddha; 1300 hundred years ago it was carved into the rock face of the cliffs along the river and can only be seen from boats on the water or from up close, so after paying the entry fee (100 yuan) you find yourself walking up a mountain path to eventually reach the height of the Buddha’s head, emerging at the top of the excavated amphitheatre in which the Leshan Buddha sits. From here you can get a good look at his head before heading down the steps; narrow and steep, they’re cut into the side of the cliff, zigzagging down to the Buddha’s gigantic feet. At points you have a drop off the side right to the river, with just a guard rail in the way; I was standing at exactly such a point when the commotion started.

I couldn’t understand what it was they were shouting about, but two fat middle-aged men with their vests rolled up over their sweaty and proudly displayed paunches got into a heated argument right there on the steps, a short distance behind and above where I was standing. The staircase was completely stacked with people toe to heel on the steps, lined up like hot and bothered dominos, breathing down each other’s glistening necks, and there was absolutely no room for manoeuvre between the rock face on my left and the guard rail (and long drop) on my right. Not a good place for a punch up. 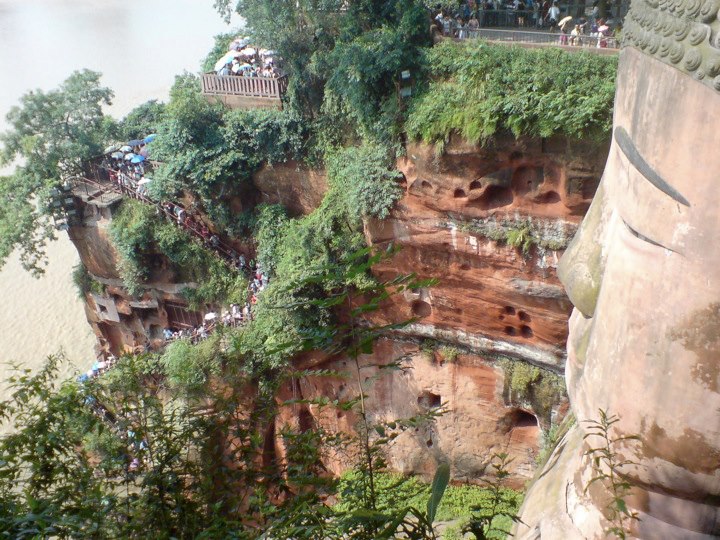 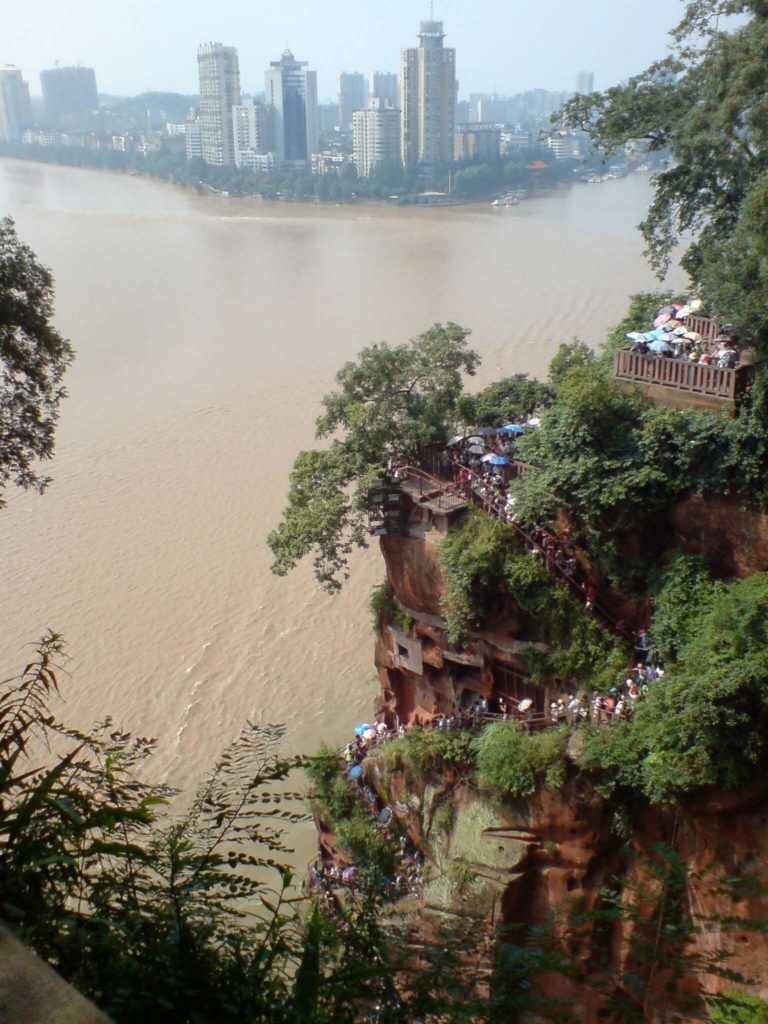 Their entire families were now weighing in, old and young, male and female, all yelling at each other; I can only guess that one party felt the other had pushed in front of them, or perhaps someone had trodden on someone’s toes… it probably didn’t help that it was a sweltering day with punishing humidity, so tempers were even shorter than usual. Old ladies and teenagers on both sides were now screaming at each other, and then someone threw the first punch; in a split second these two families engaged in a full on brawl on this jam-packed, precarious staircase, clambering over one another to join battle.

And just as the hundreds of people on the steps were lined up like dominos, now they started to fall like dominos; the two fat men had grappled and fallen, setting off a chain reaction down the steps. I saw people tumbling down towards me, grabbed the guard rail, and hopped over it; with my feet on a little rock ledge I clung on to the rail as a mass of limbs and shouting collapsed downwards just in front of me. To this day I’m amazed that it didn’t result in a full-on tragedy; a couple of years later this fatal crush happened during Shanghai’s New Year waterfront celebrations, and I thought again how fortunate all of us on the Leshan Big Buddha steps that day were to not have been caught up in something similar. No-one was crushed, no-one was knocked off the cliff into the river, and as far as I’m aware no serious injuries were sustained; the falling dominos piled up at a corner of the zigzagging steps, and thankfully the chain reaction didn’t continue around the corner.

I continued to perch on my ledge and assisted the people nearest me as everyone tried to disentangle themselves and get upright again, while these two morons continued in their attempts to trade punches. Somehow word got up to some security guards who appeared surprisingly quickly, working their way as fast as they could (i.e. not very fast) down to the brawl, and somehow they were able to restore something resembling order – I’m guessing it was the uniforms – and eventually managed to get the warring parties to follow them back up the steps, picking their way slowly through the mass of people.

With things calm once again I finally hopped back over the rail to rejoin the line on the steps, and in due course completed the standard Leshan Big Buddha visit… you make your way down, snapping photos, for the worm’s eye view next to his feet, and then exit the amphitheatre via a tunnel on the other side which ascends through a series of caves back up to the Buddha’s head. There are some other trails you can then wander from there, visiting various temple buildings also dotting the mountainside, and I got chatting to an Irish-Chinese family (they even offered me a teaching job at their school in Wuhan) and we all agreed it was remarkable no-one had been seriously hurt in the fracas. 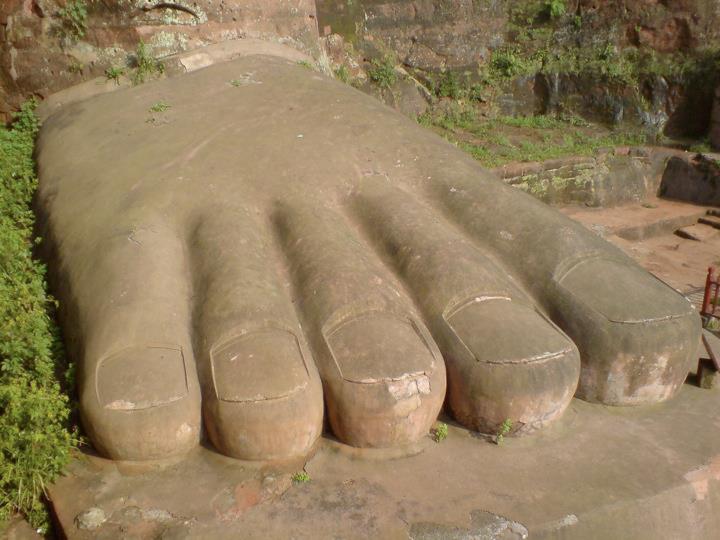 Perhaps even more remarkable was that the two families were still fighting as we made our way over to the path back down to the road; they’d obviously kept right on arguing as soon as they’d been brought back to safety at the top of the steps and were still now screaming in each other’s faces a good hour after it’d all kicked off, the security guards standing close at hand and at the ready. Completely ridiculous behaviour, and we could still hear those idiots shouting long after they were out of sight.

Anyway, brawl aside the Leshan Buddha was great and is well-worth a day of your trip if you’re staying in Chengdu. As noted above, Leshan is also a good place for a visa extension at the PSB; this requires staying for a couple of days, and while the town doesn’t have that much else to see it does have plenty of awesome food – the cold, spicy 5 yuan dandan noodles make a great breakfast, and the barbecue joints hit the spot for dinner. You can also easily continue on from Leshan to nearby Emei Shan (somewhere I’ve yet to visit, but will do so whenever I’m next in Sichuan)

Any questions about visiting the Leshan Big Buddha? Or got any good brawl stories to share? Leave a comment and I’ll get back to you.