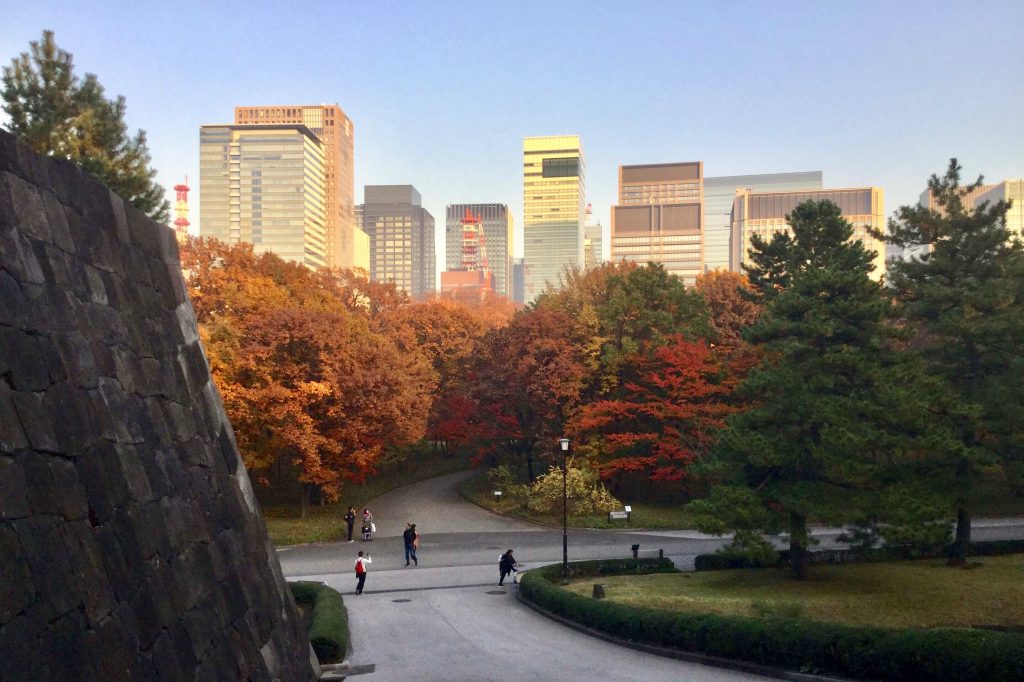 Seeing the cherry blossoms in spring probably tops the wishlist for most travellers visiting Tokyo, but an equally awesome time to visit the Japanese capital is during the autumn colours (the Japanese word is koyo, 紅葉, literally ‘red leaves’). The cherry trees are first (and least spectacular), starting in mid-October, then the ginkgo trees (Tokyo’s official tree) go bright yellow, and finally the Japanese maple trees in late November/early December turn such a brilliantly defiant shade of red that it almost looks fake. 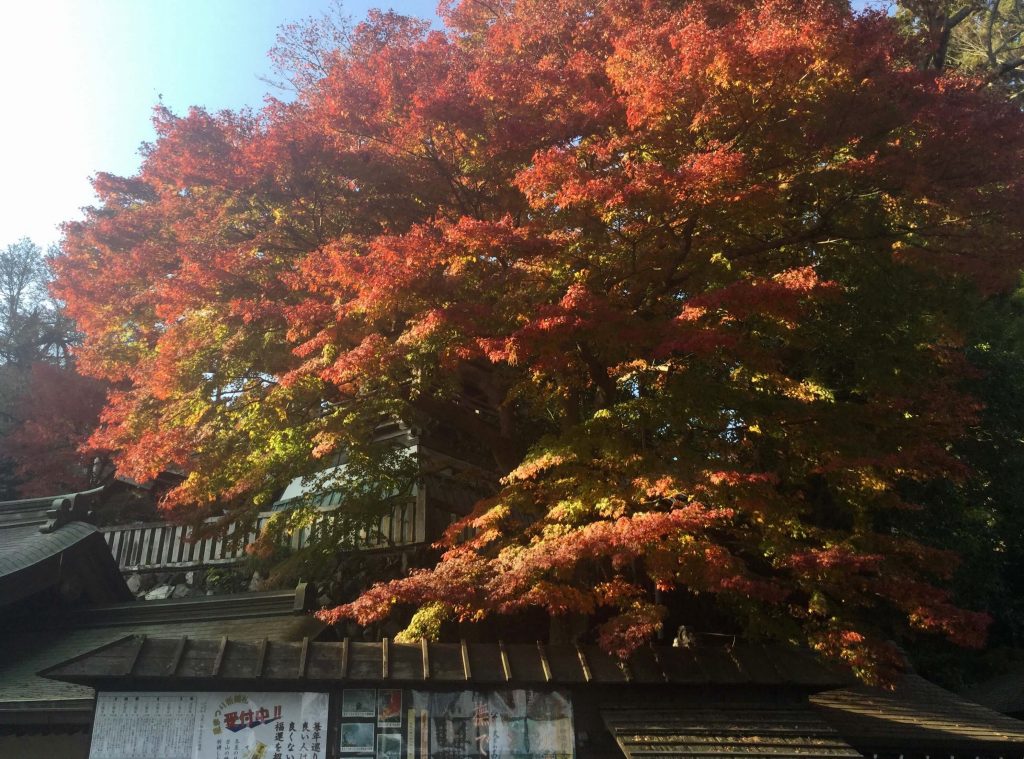 The autumn colours have a much longer window than the cherry blossoms, making them easier to plan for; for the very best colours in the city itself, time your visit for late November/early December. If you’re there a bit earlier (starting from early October in Nikko) you can still see them by heading out to the mountains north & west of the city (see bottom of post) 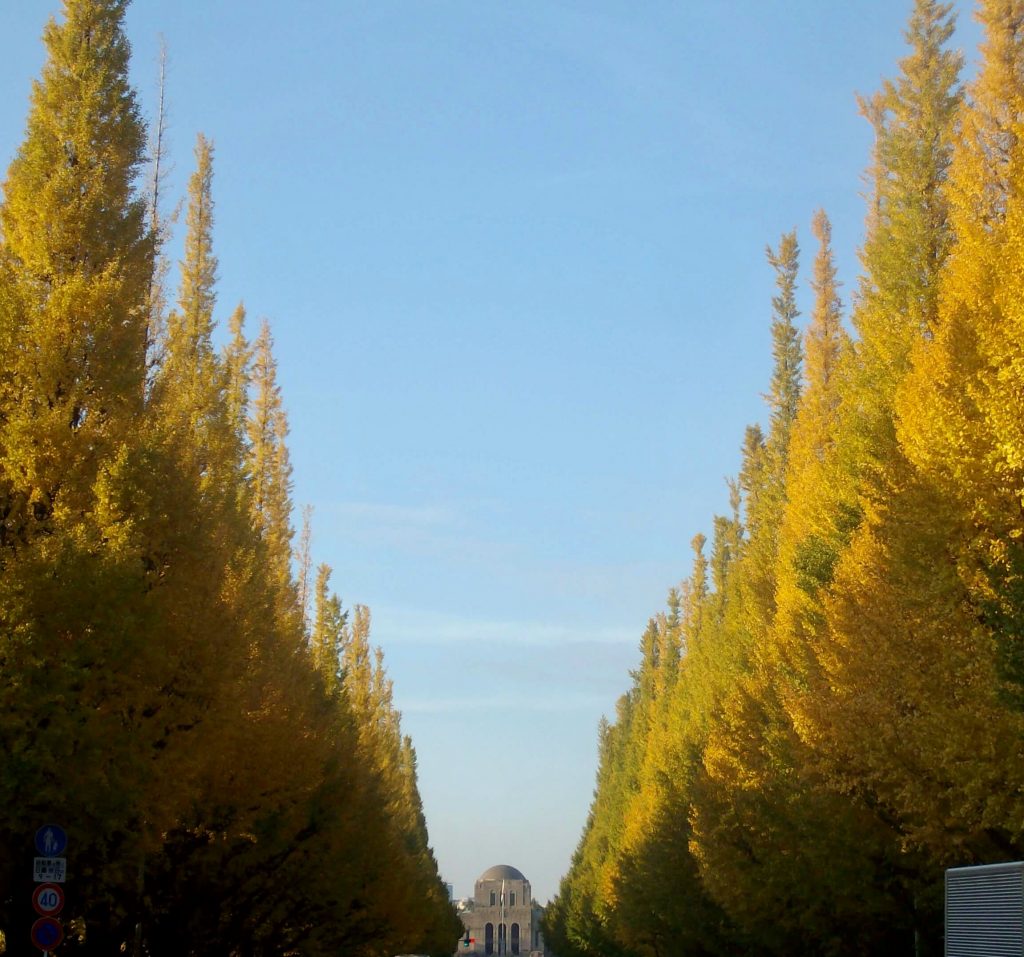 Icho Namiki (Ginkgo Avenue) is named for the rows of tall ginkgo trees lining it on both sides. The ginkgo (icho in Japanese) is the representative tree of Tokyo, and indeed the symbol of the Toei subway is a green ginkgo leaf (this one) – but in autumn those green leaves turn bright yellow, and leaf spotters head to Ginkgo Avenue in droves to stroll, take pictures, and relax in the neighbourhood’s many cafés.

Takaosan is the most popular hiking spot in Tokyo, thanks to the ease of access with the Keio Line running right to the base of the mountain and taking just 50 to 60 minutes from Shinjuku. 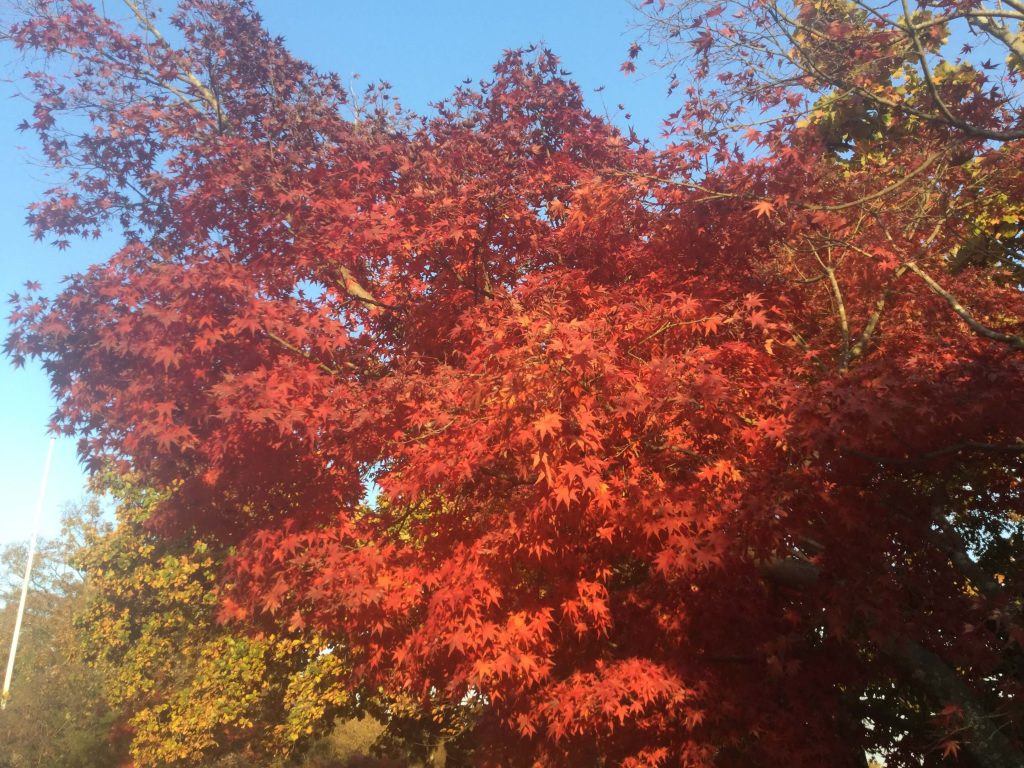 It’s also one of Tokyo’s most famous autumn colour spots, with a good number of maple trees dotting the hillsides. If you’re after red maple leaves in Tokyo but aren’t such a fan of landscaped gardens, Takaosan’s the place to go. See here for details on hiking up Takao… also, if you continue on walking another 10 minutes past the summit after ascending route 1 (the main trail), you come to the momijidai (もみじ台), a section of the mountain with many momiji (maple trees)

Due to the elevation spread, the colours on Mt Takao are a little earlier than in central Tokyo (by a week or two) and have a longer window as the colour changes at the top first and then works its way down the mountain.

Unlike Kyoto where the autumn colours are mostly enjoyed at the city’s many temples & shrines, or in the surrounding mountains, most of Tokyo’s leaf viewing is done at the various gardens & parks dotted around the city. 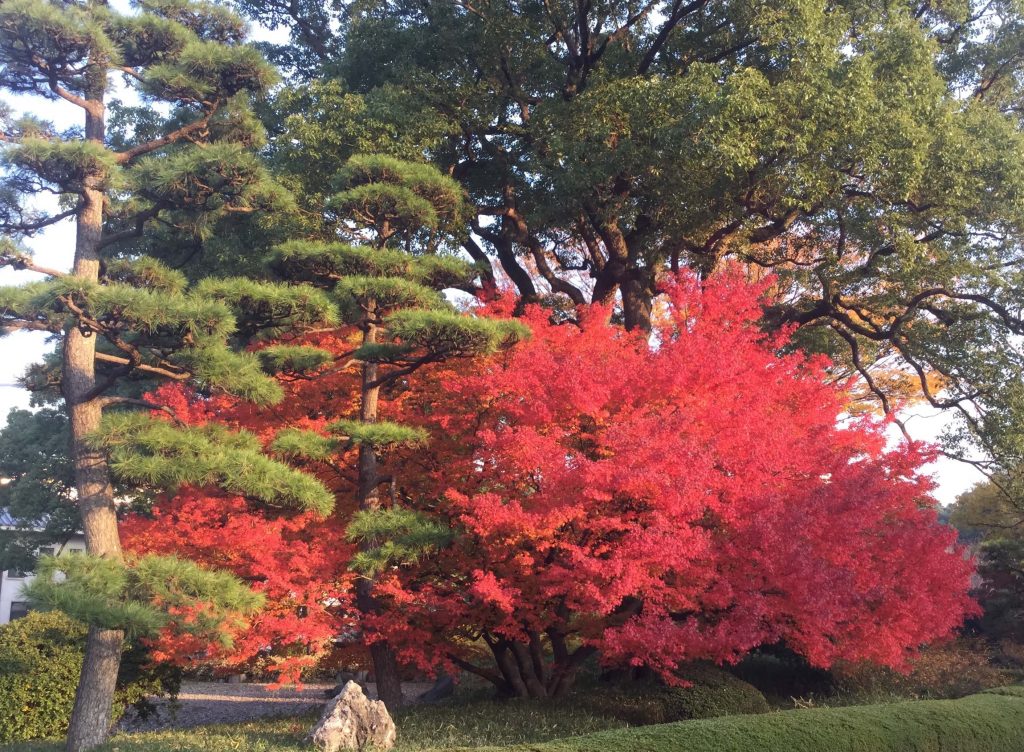 There are many to choose from, but the ones most noted for their autumn colours are the Imperial Palace East Gardens, Shinjuku Gyoen, Korakuen (next to Tokyo Dome) and Rikugien (near Sugamo Station on the northern stretch of the Yamanote Line) 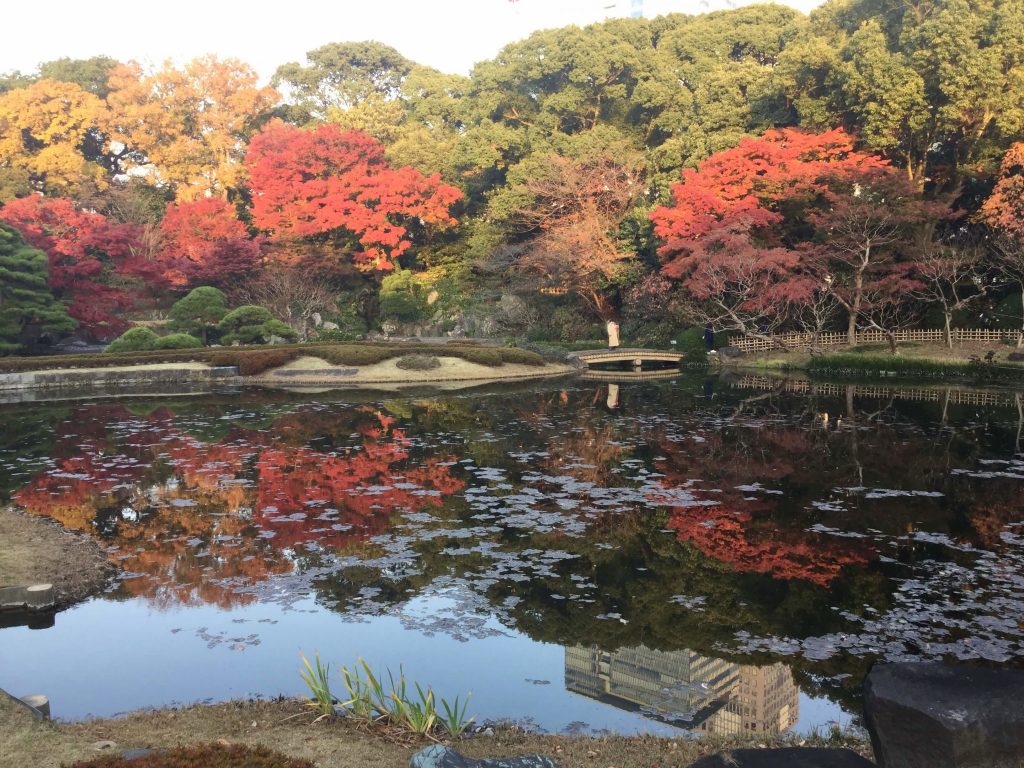 Of the four I like the palace gardens best, owing to the added interest of the moat & the old castle ruins, and the backdrop of the Marunouchi district. (You can also see colours at any of the other parks & gardens such as Hamarikyuen, Harajuku Park / Meiji Shrine, and Inokashira Park in Kichijoji) 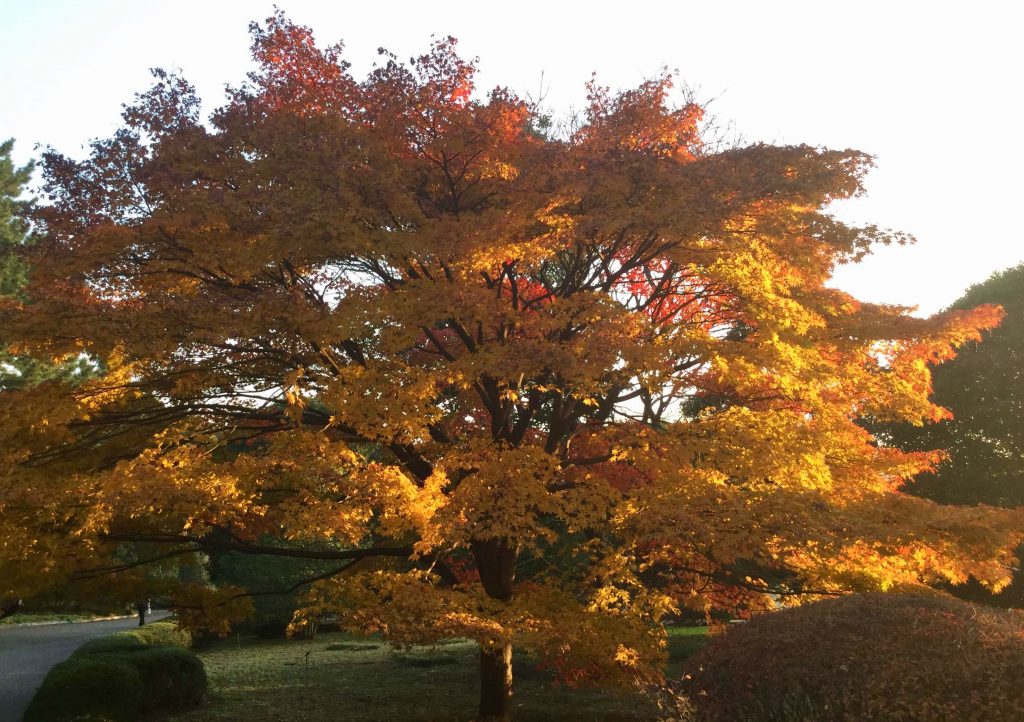 If you’re too early for the colours at the above spots, you can head a bit further out of the city to higher elevations where the leaves change a few weeks earlier. There’s a huge number of places you could do this, but the most appealing are the following:

Okutama: a mountain town on the far western edge of Tokyo in the Tama Mountains, Okutama is surrounded by great hiking options. Good ones for autumn colours are the hike up to Lake Okutama on the Okutama Mukashi Michi (Okutama Old Road), and the river valley trail near Mitake Station. It takes around 2 hours via the JR Chuo & Ome lines (usually with a change of trains at Ome Station).

Kawaguchiko: beyond the Tama Mountains lies Yamanashi Prefecture, home to Mt Fuji. Yamanashi’s Fuji 5 Lakes area is both one of the best places from which to view Fuji and also has some of the most famous autumn colours in the Greater Tokyo region. Access is via the JR Chuo Line, switching at Otsuki to the private Fujikyu Railway, taking about 3 hours in total, or you can take a direct 2-hour bus from Shinjuku Bus Terminal (above Shinjuku Station’s New South exit).

Nikko: the spectacular mausoleum of Ieyasu Tokugawa (the first shogun of a unified Japan) is the main draw at Nikko, but if you go beyond it into the mountains of Oku-Nikko (‘Deep Nikko’) there’s a whole area of lakes, waterfalls, volcanoes, and hot spring resorts to explore. Oku-Nikko covers a wide elevation change, and the autumn colours work their way down from top to bottom throughout the month of October.

Have you seen the koyo in Tokyo? Any questions or comments? Give me a shout below!