Taiwan is a truly beautiful place, an island of forested mountains (with the higher peaks being snow-capped in winter despite the tropical climate), serene lakes, and dramatic cliffs towering precipitously over the Pacific Ocean down the east coast. The highest of Taiwan’s mountains is Yushan (玉山, Jade Mountain), which rises to a height of almost 4,000m – also making it higher than Japan’s Fuji-san, or any other mountain in Korea or eastern China. So that was of course the hike I most wanted to do in Taiwan, but unfortunately my attempts were foiled not by the effects of altitude, nor by bad weather or landslides, but by good old red tape – before I ever went anywhere near the mountain! Taiwan’s hiking permit system makes it a requirement for all hikers doing mountain hikes in Taiwan’s national parks (which cover all of the high mountain areas on the island) to have not just one, but two permits – a police permit and a hiking permit. The police permit is apparently easy to get and just a formality, but I never even got that far as I was repeatedly unable to secure a hiking permit even when applying four weeks in advance of my intended climbing date. So if you’re visiting Taiwan with the intention of climbing Yushan (or the other big ones like Xueshan) you need to apply for your hiking permit at the earliest possible time, which was 3 months in advance at the time of writing. Here’s the application page, and here’s a useful explanation of how it actually works and a description of the Yushan hike.

Having been frustrated in my attempts to get a permit for Yushan during my spells in Taiwan, I got stuck into the fantastic day hiking in and around Taipei instead (in addition to having visited Taroko Gorge on my first trip to Taiwan). Taipei sits in a basin, and the ring of jungle-clad mountains around it provide myriad hiking opportunities, with many points of interest to visit including waterfalls, lakes, temples, and tea plantations, and cracking views out across the city below; combined with the fact that many of the trails can be accessed directly from the MRT, this all means Taipei is pretty much a hiker’s dream (albeit a rather weather-dependent one)

The most famous hike within Taipei itself is Xiangshan (Elephant Mountain), though what with the crowds it’s far from my favourite – that would be the Neihu ridge hike to Bishan Temple, or perhaps the Yinhe Cave Temple hike in Maokong. If you have time to get out of the city, the trails in the abandoned mining areas near Jiufen are some really good hiking, and the popular mountain town of Jiufen is likely already on your sightseeing itinerary so you may as well hike to it! Taroko Gorge is further afield, but well worth the effort if you have a day or two to get out of the city – it’s doable as a (long) day trip from Taipei. 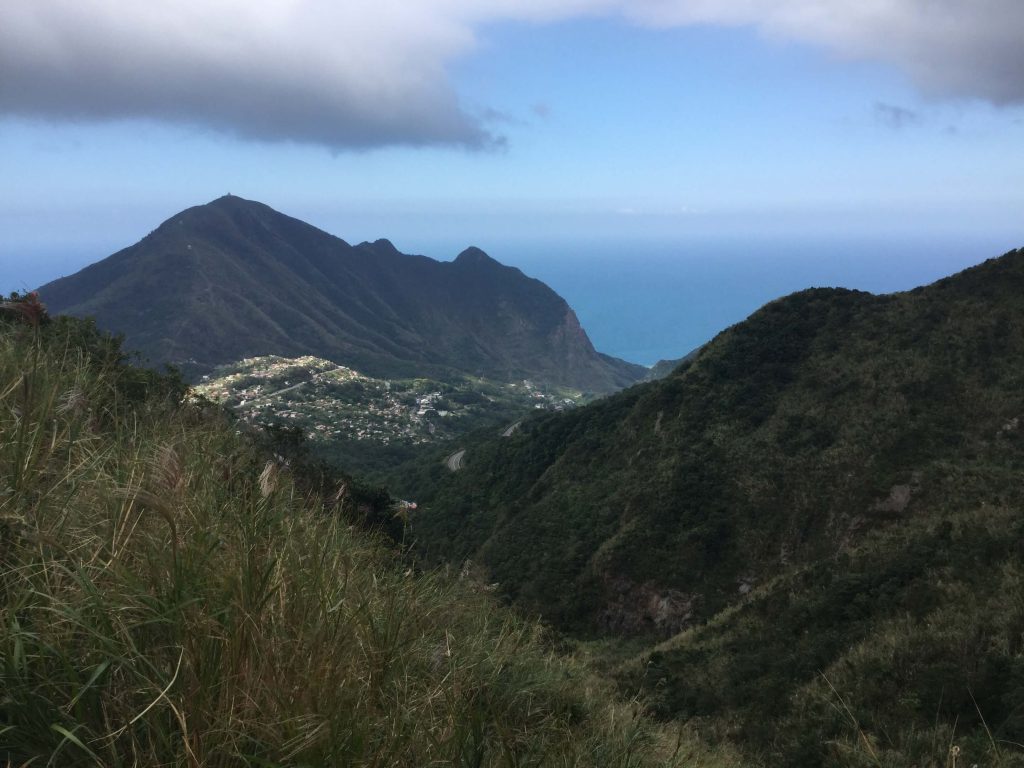 Jiufen’s one of the main tourist spots around Taipei, a gorgeously situated mountain town with ocean views and a nice ‘Old Street’ of traditional teahouses, and especially popular with Japanese tourists (and fans of Japanese anime) due to its having apparently inspired Miyazaki Hayao’s Spirited Away. Most visitors simply visit the town by road, but the entire surrounding area’s just made for hiking; this cracking route starts from Houtong ‘cat village’ (another popular tourist spot) and takes you up over the ridge to Jiufen. 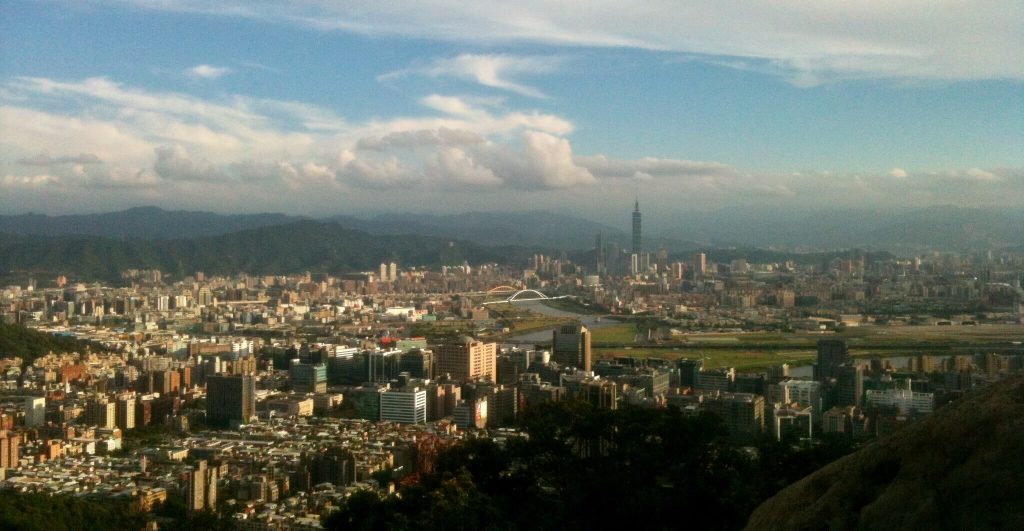 When I first arrived in Taipei I had an Airbnb in Neihu, and though I only stayed there for a month it’s probably my favourite district in Taipei – largely due to the excellent hiking trails along the ridge. Bishan Temple and Jinmian Rocks are two great goals for hikes in the area with awesome views of the city, or you can make one long hike out of it and hit them both in one go. 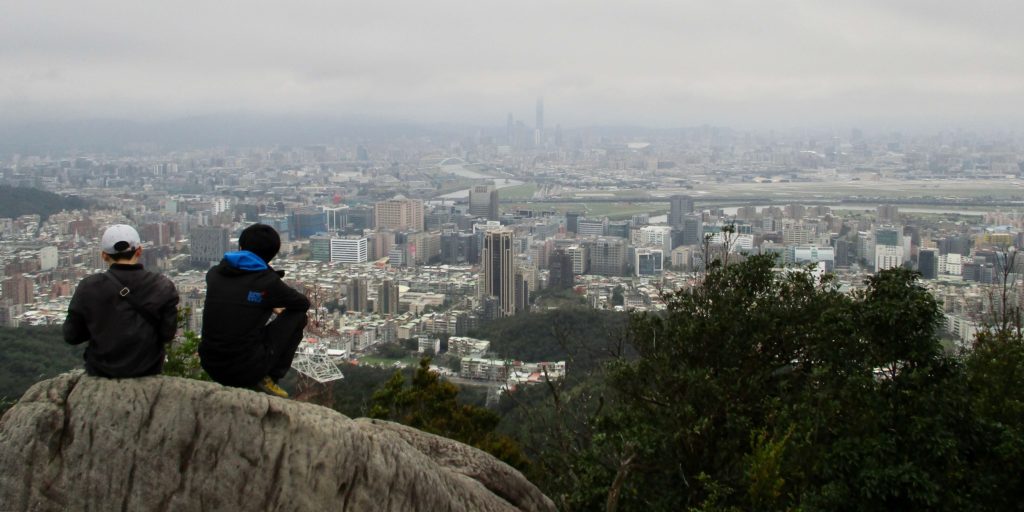 A shorter hike to Jinmian Rocks up & down from Xihu Station.

This hike covers the western portion of the Neihu Ridge covered in the above two hikes, starting from Jiantan Station and finishing either at the National Palace Museum on the north side of the ridge or descending to Neihu on the south side. 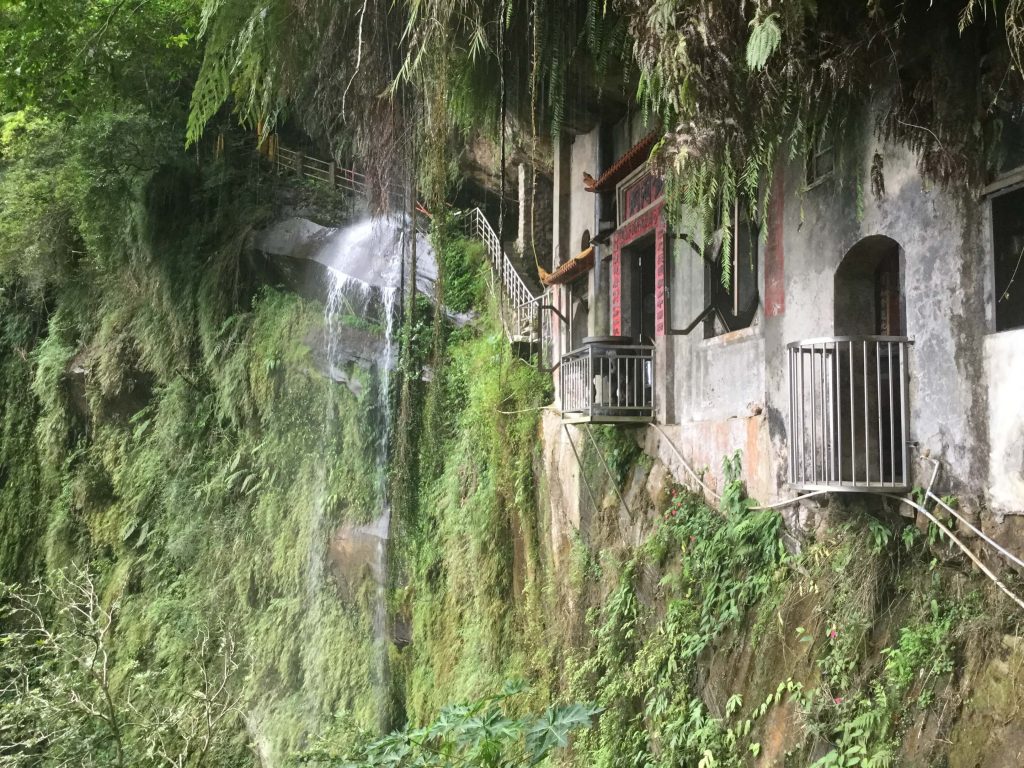 Maokong’s a tea plantation district in the hills above southern Taipei, where you’ll find this cool little cave temple built into a cliff face (along with various other points of interest of the tea & temples variety). You can access Maokong by gondola, but here’s how to hike up from the bottom and over the ridge to the cave temple. 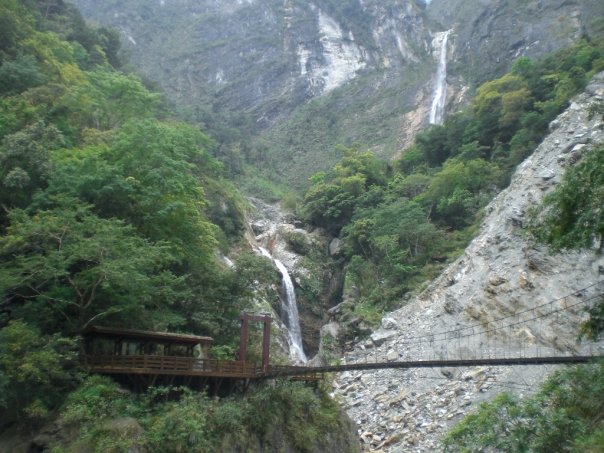 Taroko Gorge is the breathtaking centrepiece of Taroko National Park near Hualien on Taiwan’s east coast. It’s best to stay in the area so you can explore at your leisure, but it is possible to do it as a (long) day trip from Taipei as described here. 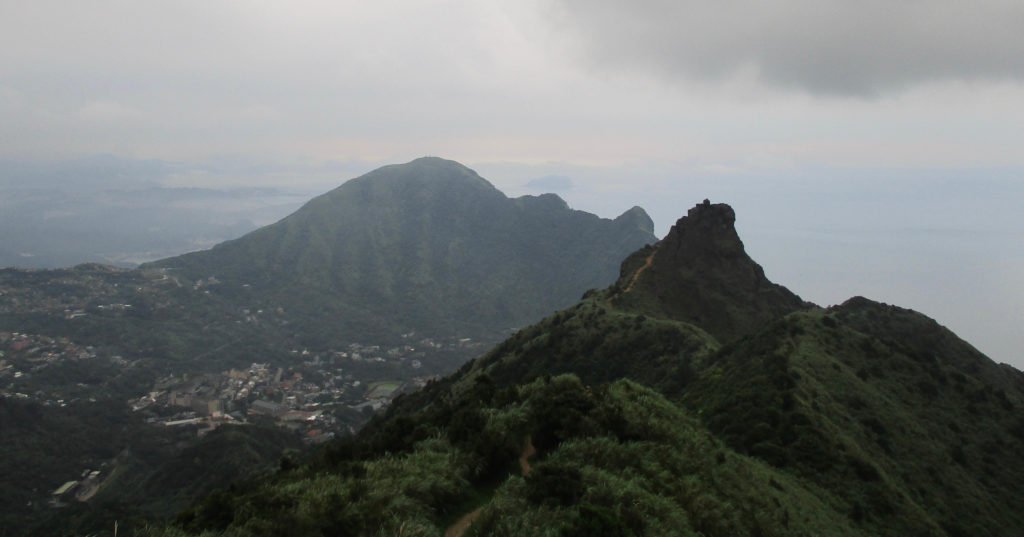 This is another one out near Jiufen, a great hike with views of northern Taiwan and the Pacific Ocean. There are a couple of good scrambling sections, through the cave at the top of Teapot and up Stegosaurus Ridge to reach Mt Banping. 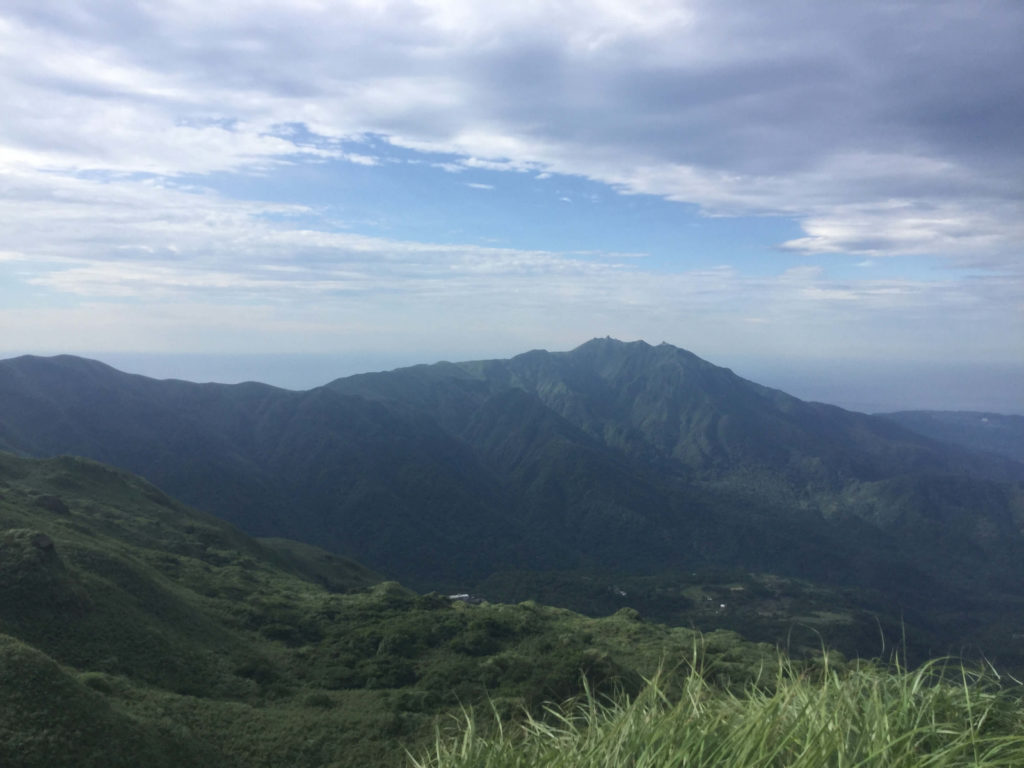 Qixingshan (7 Star Mountain) is the highest peak in Yangmingshan National Park, and the highest point in Taipei. If you want to climb the biggest mountain in Taipei, this is the one – just be sure you have good weather for it. 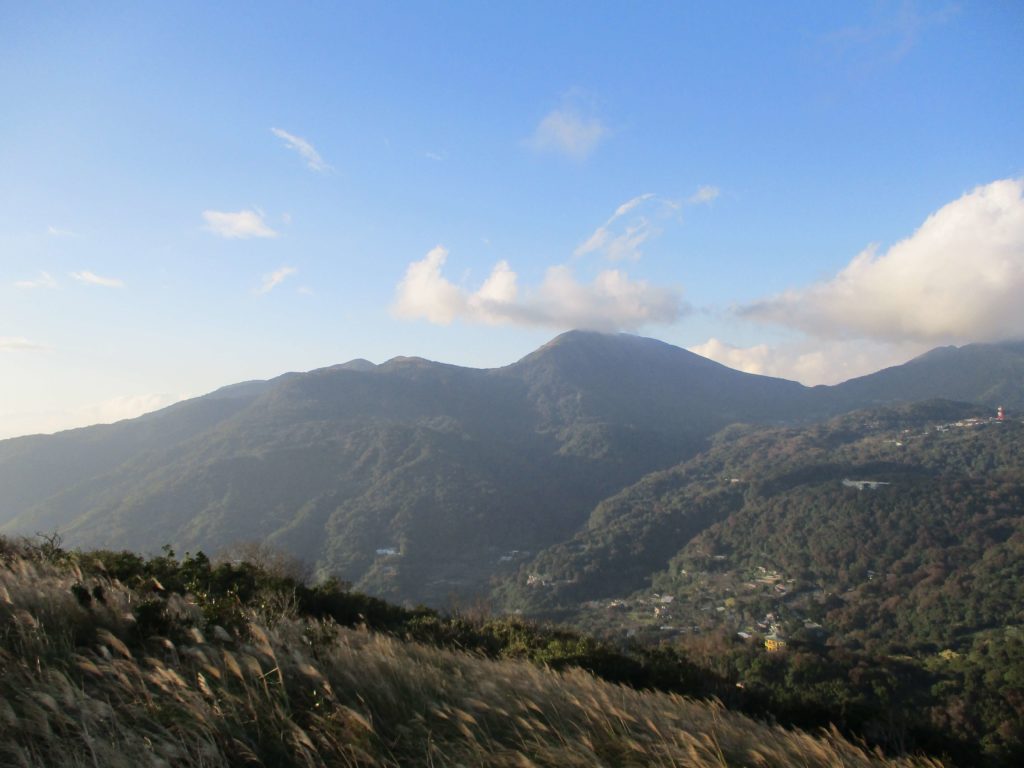 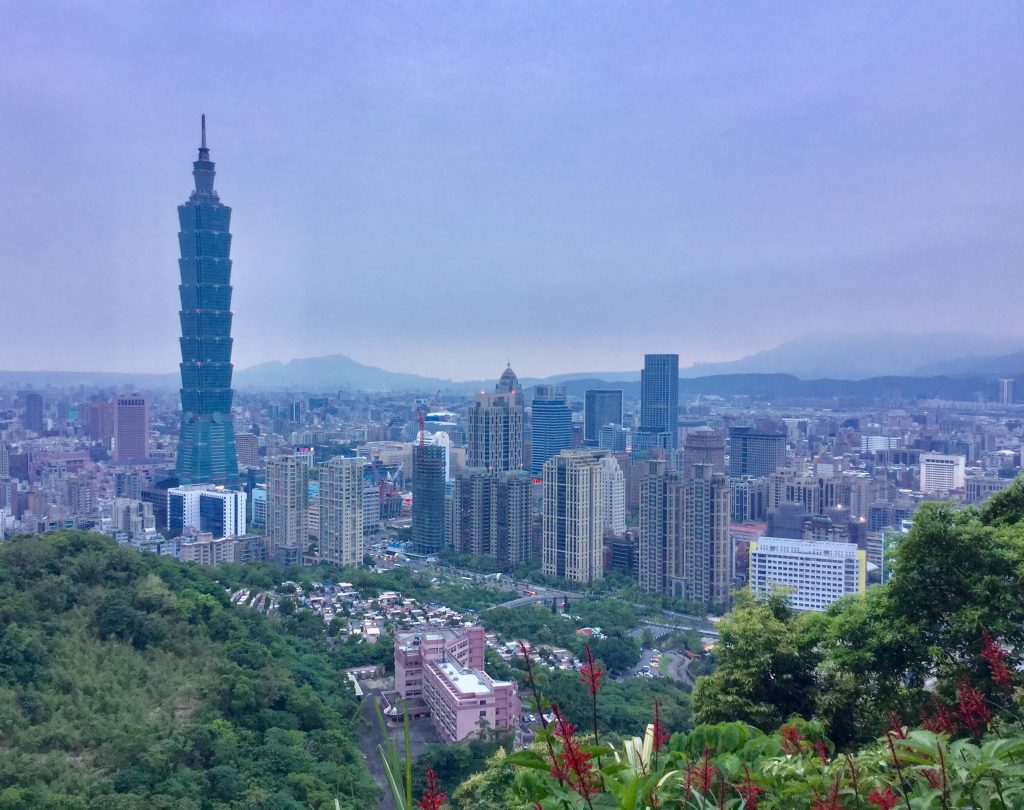 This hike is the absolute Taipei classic, a short steep walk up to what is surely the city’s most photographed view. It’s a popular and busy route so not my favourite, but if you’re up for a hike without having much time for it Xiangshan fits the bill. 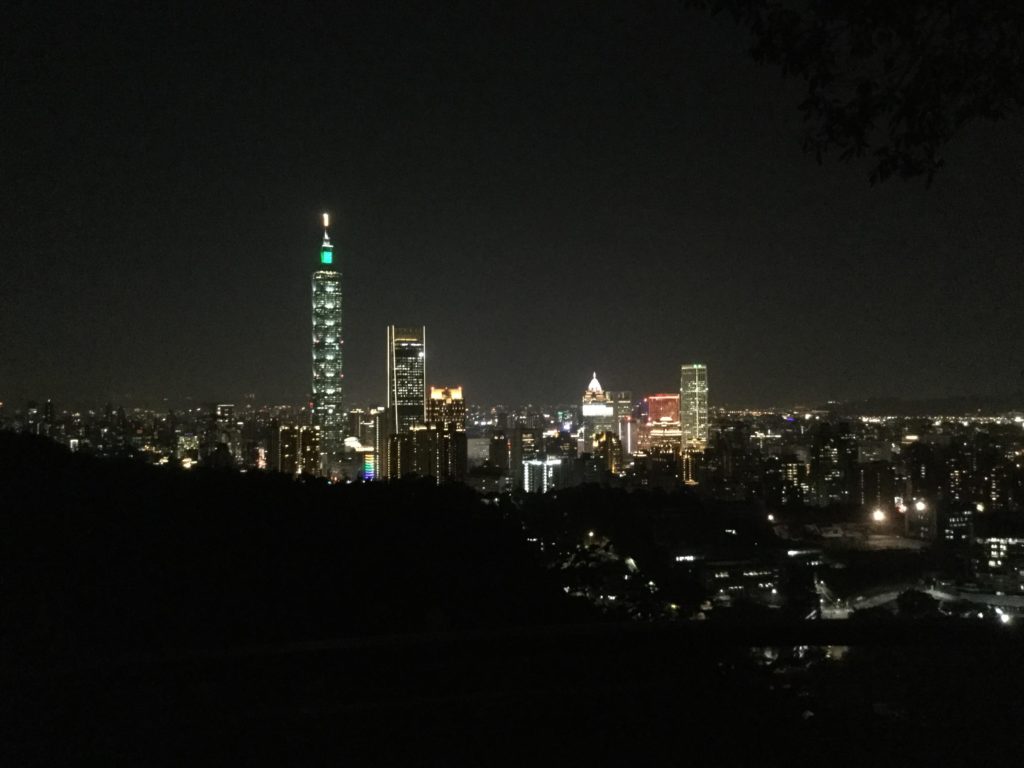 Elephant Mountain is actually one of four connected peaks named after animals, along with Lion, Leopard, and Tiger peaks. The others are far less crowded and Leopard & Tiger have great views, and Elephant Mountain is quite a short hike so you can easily extend it to the other beasts. Though if you want to go to the highest point of the mountain it isn’t any of the beasts, but Mt Nangang: 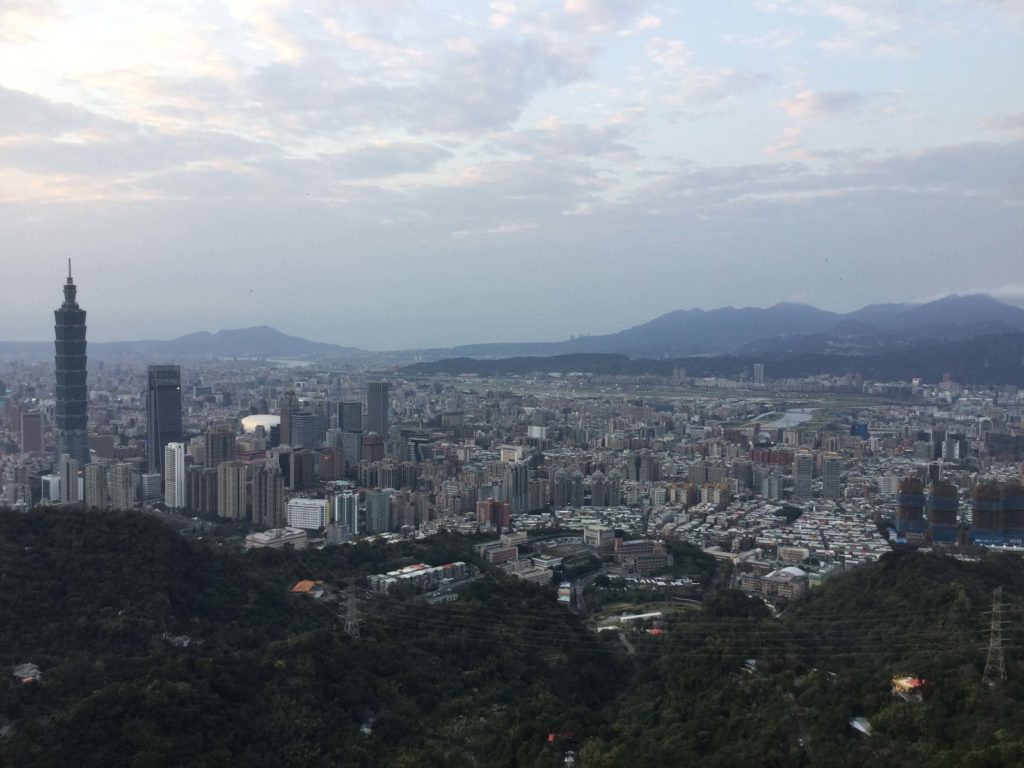 Mt Nangang is the steep ridge to the southeast of Taipei 101, including the subsidiary peaks of the Four Beasts. The highest point is 9-5 Peak, more than twice as high as Elephant Mountain. This hike starts with Tiger Mountain (and a quick detour to Leopard) then goes up to 9-5 Peak before descending via Elephant Mountain. 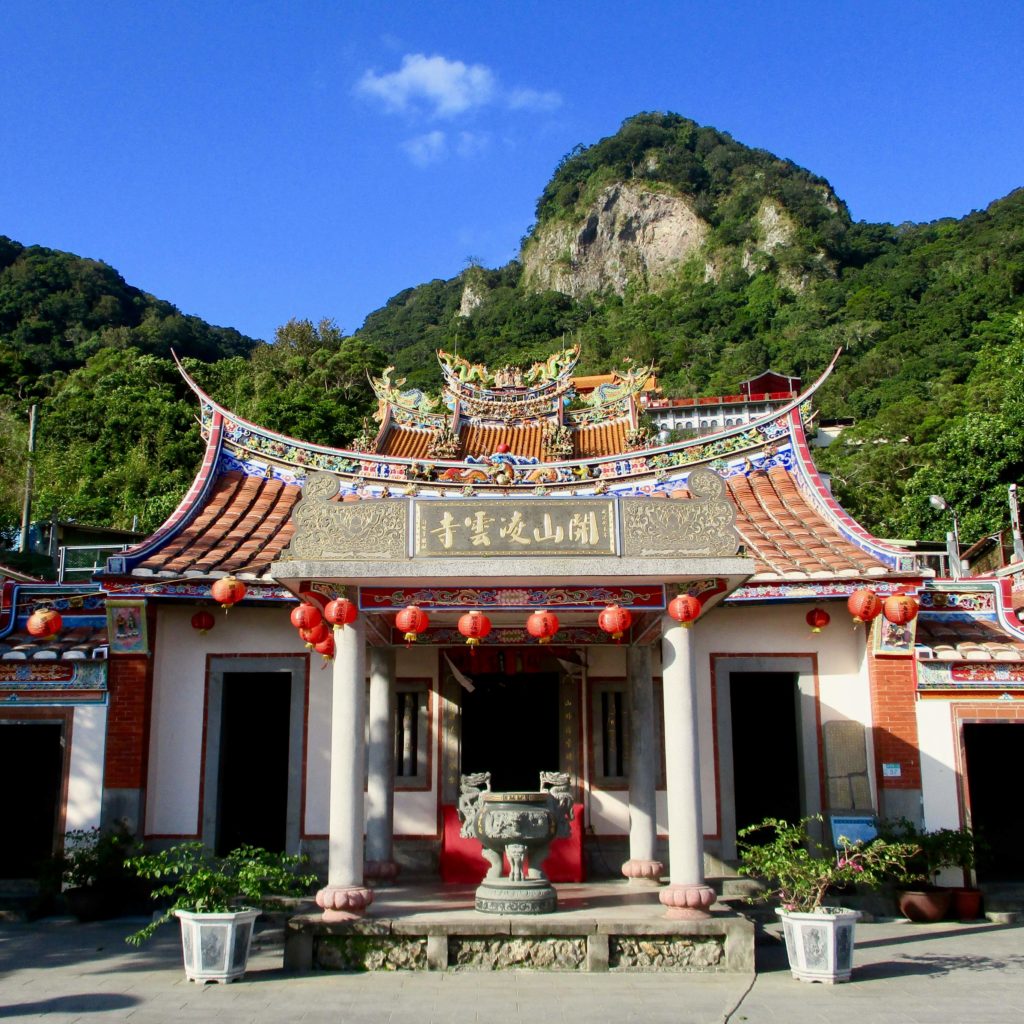 Guanyinshan is the mountain visible in the far distance behind Taipei 101 in the classic photo from Elephant Mountain. It stands in the northwest corner of the Taipei area and is a nice little hike with a couple of impressive temples at the start followed by a short, steep trail up to the summit from where you have awesome views of the ocean, city, and mountains at the same time. 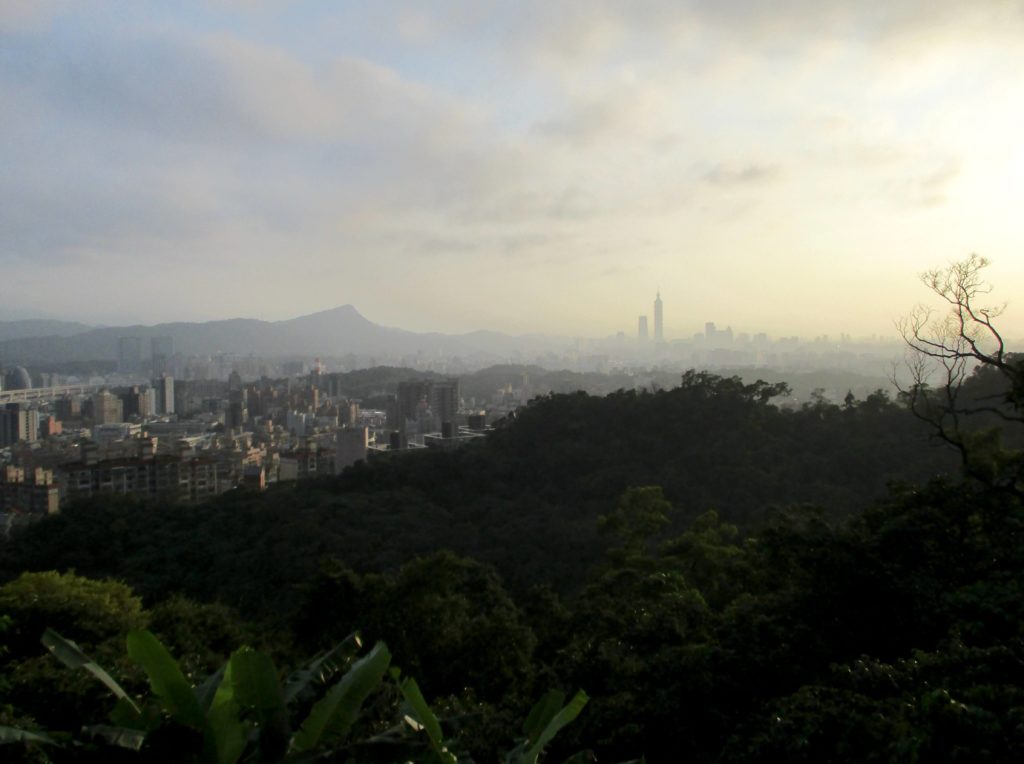 Two more Neihu hikes, these two routes start from Dahu Park and are much shorter than the above Neihu ridge hikes. The views are still nice though, and these are good if you’re not looking for anything too involved. 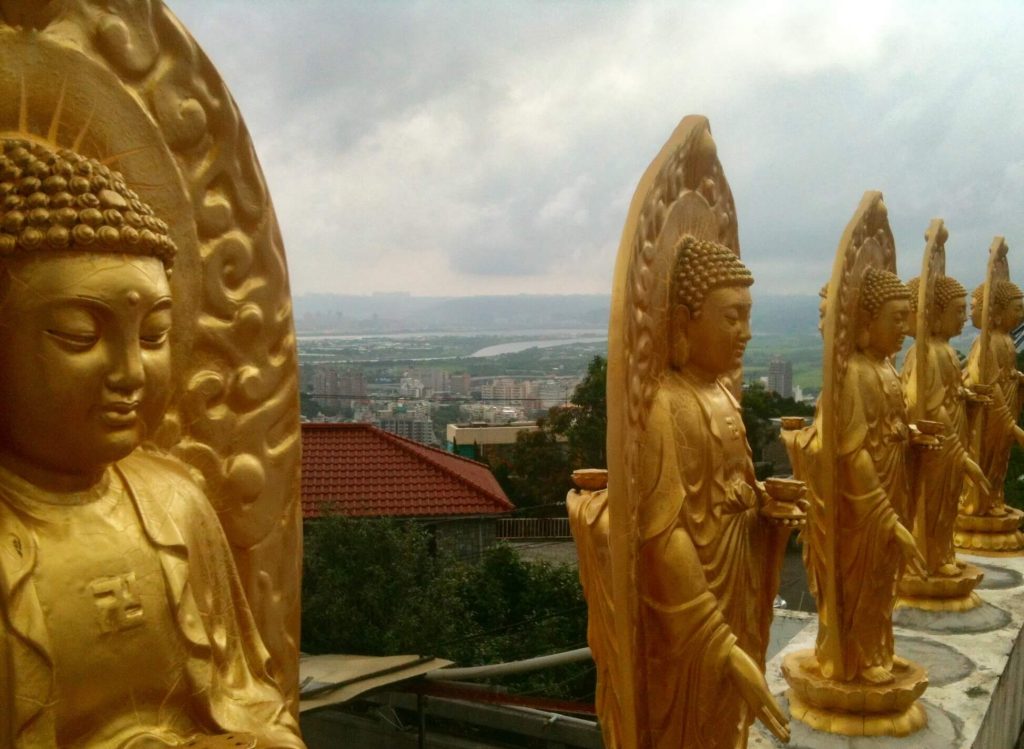 An interesting hike in northern Taipei, ending in the Xinbeitou hot spring district. There’s no view of Taipei 101, but the route takes you to some neat shrines & temples and can be combined with a visit to Shilin night market. 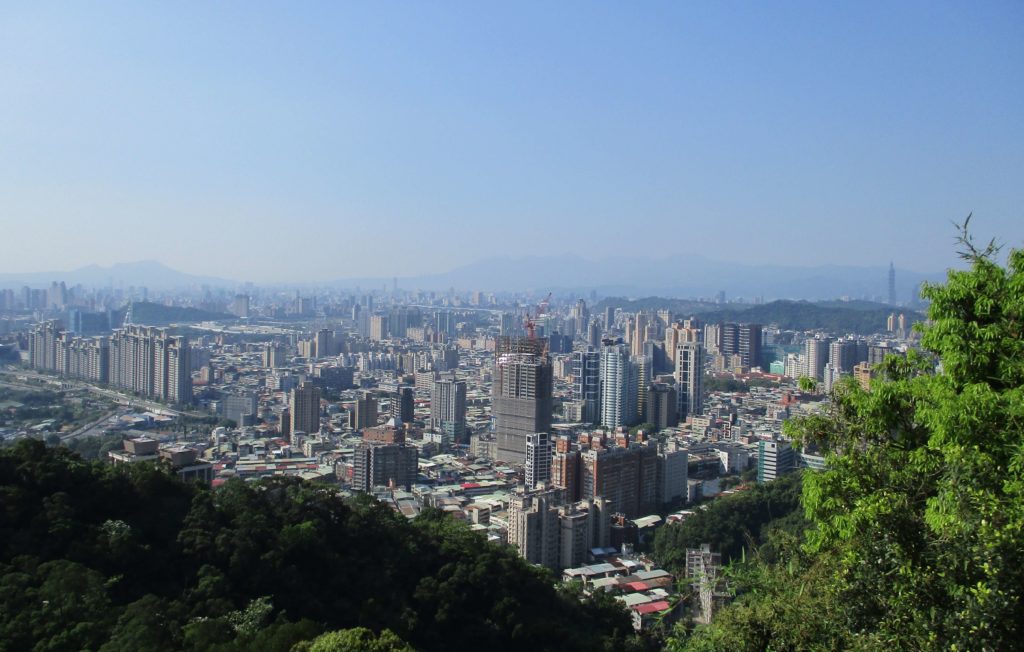 The Xindian district’s home to Bitan, a popular recreational area with mountain views, riverside cafes, and pedal boats for hire on the water. Shitoushan’s a short, steep hike right above Bitan, and if you’re a walker it’s the best thing to do in Xindian! 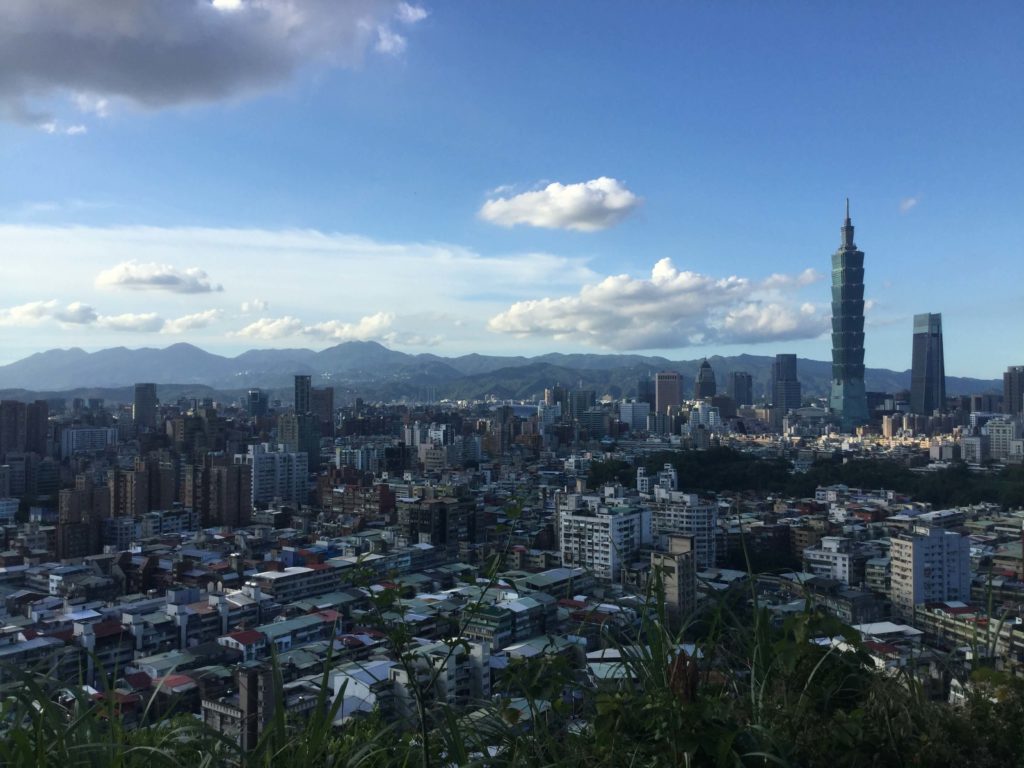 Fuzhoushan is a nice alternative to Elephant Mountain for classic Taipei city views, with an easier gradient and without the crowds. It’s a short hike on park trails but you can extend it along the ridge to Zhongpushan for a higher viewpoint and something (slightly) more wild.

Accommodation: search & book rooms in Taipei. Airbnb’s also a great option in Taiwan, if you’ve never used it before you can get a 30 dollar discount if you sign up with this link

For more detail on the hikes I’ve covered, plus an awful lot more on hiking in Taipei and around the island, check out these great Taiwan hiking blogs:

Taiwan Off the Beaten Track

Over the City: Hidden Taiwan

Spectral Codex (not strictly a hiking blog, but it’s an awesome Taiwan-centric blog with a good dose of hiking)

Also check out this excellent Taipei hiking page; it’s in Chinese only, but it’s the most thorough online collection of Taipei hiking trails I’m aware of, with stats, maps and information for hikes all round the city.

(If you’re heading to Japan or Korea, see my guides to the best hikes in and around Kyoto, Tokyo, and Seoul)

Also, make sure you have a good insurance policy; World Nomads offer flexible travel insurance you can buy even if already overseas – most travel insurance companies won’t cover you if you’ve already left your country, and this can be a crucial point as I once found out the hard way in Thailand

(These are affiliate links i.e. if you use them to purchase accommodation or insurance, 4corners7seas will receive a commission from them – this comes out of their profit margin at no extra cost to you. I’m recommending them because I know and trust them from personal use; thank you in advance should you choose to support 4corners7seas by using these links)