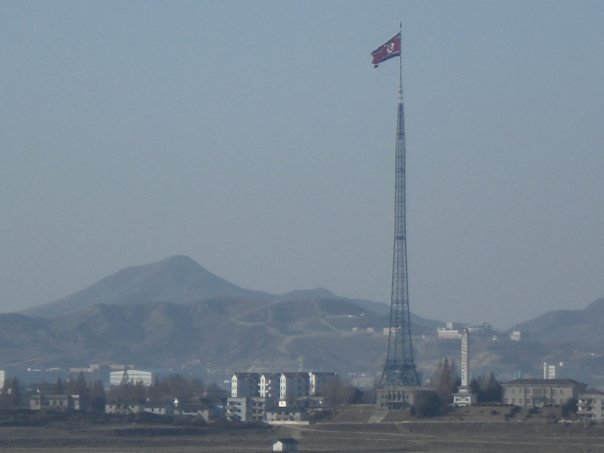 First of all, to be clear, I haven’t really been to North Korea – I have stood on North Korean territory, but only as part of a DMZ tour from Seoul. On these tours you get to enter the negotiation hut which straddles the border in the Panmunjeom JSA (Joint Security Area), one half in the ROK (South) and one half in the DPRK (North); you’re free to go stand in the North Korean half and take pics out of the window, but that’s it. ROK soldiers guard the exit, and you most definitely don’t get to interact with any North Koreans (though you do see plenty of DPRK soldiers in the area).

So, technically speaking, I’ve stood inside North Korea; but I haven’t really been there. I guess it’s a bit like transferring at an airport without clearing immigration (but with more guns) – you’re there, but you’re not.

I’ve also looked across DPRK’s northern border from Dandong, which faces North Korea from the Chinese bank of the Yalu River.

How to Visit North Korea by Organised Tour from China

So, how to visit North Korea properly? Well, first of all if you really want to do it, you have to join an organised tour (from China), fully pre-booked, fully-guided, with no independent travel permitted. The guides are essentially also your minders, making sure you don’t see anything you shouldn’t or speak to anyone you shouldn’t i.e. they have a very specific image they want to give you. Joining a tour is the only way you can get a visa (unless you’re from Malaysia – Malaysians and North Koreans can visit one-anothers’ countries visa-free, though this may change as a result of the assassination of Kim Jong Nam in Kuala Lumpur, after which a number of Malaysian nationals were effectively de facto hostages for a while in North Korea while the resulting diplomatic spat played out).

So, at time of writing, the only option is a tour from China. These tours are arranged through China-based travel agencies; a quick google will get you a list, but the most well-known for western tourists is Koryo Tours (based in Beijing, but with full English-language service).

There are only two options for entry/exit to North Korea. By air, you can take the Air Koryo flights between Beijing & Pyonchang on antique Soviet aircraft; for overlanders, there’s a weekly overnight train each way between Beijing & Pyongyang (which I believe you can also arrange to board in Dandong).

As for what you actually do in North Korea, that’s between you and your tour operator; as standard, the tours include the main spots in the capital and visiting the DMZ from the north. They can also arrange specific things by request (e.g. golf, skiing), depending on permission from the authorities. The place I’d most like to visit is Baekdusan, a sacred volcano on the border with China (though it’s much more easily visited from the Chinese side, where it’s known as Changbaishan).

Should You Go to North Korea?

Obviously, this is a question every traveller can only decide for themselves. The appeal is obvious; as a pariah state, the Hermit Kingdom, there’s an extra layer to the sense of adventure in going there, a hint of danger, the tantalising temptation of going somewhere so little seen or understood by the outside world.

Of course, for some unlucky (or idiotic) individuals, the hint of danger ends up being all too real when they end up getting shot, or arrested and tortured or put to work in forced labour camps. In other words, if you do go, don’t be a moron; stick to the rules. Even if you were to get away with breaking the rules, imagine the potential consequences for the guides (and their families) who were watching you at the time.

Personally, I decided not to go. The idea of “see it before it changes” is a weak argument in my opinion – I want it to change. I want the people of North Korea to have the same living standards, rights, and opportunities as the people of South Korea, and I don’t want my tourist dollars going towards the continuation of the present regime. I want it to change, and then I’ll go there to witness that change firsthand.

Others decide that by trying to show the lives of ordinary North Koreans (insofar as they’re able to do so), they can help to generate empathy for the North Korean people.

And others go simply for the cool factor, to tick off an ‘impressive’ box on their travel bucket list. Kinda douchey if you ask me, but it’s their call.

Other Options for a Glimpse into North Korea

If your feelings are similar to mine and you don’t want to go as things stand, but you’re also fascinated by the place and want to at least get a glimpse of it, there are a few good places to do so. 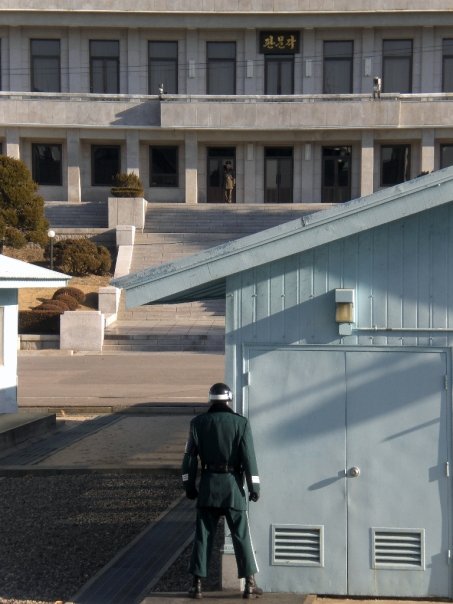 DMZ/JSA tours: this is the most obvious and close-up way, allowing you to actually cross the demarcation line in the JSA as described above. For full details on visiting the DMZ, see my post here

DMZ (non-JSA): the Panmunjeom JSA isn’t the only place to visit the DMZ. Indeed, South Korean citizens aren’t even allowed to. In the Seoul area you can also visit the Odaesan Observatory and the Dorasan Observatory; details for these are also given in my DMZ post. Further east along the border in Gangwon-do Province there are multiple spots you can visit (see here for details)

The bustling city of Dandong with its bright lights sits in stark contrast to the Spartan North Korean town of Sinuiju with its forlorn chimneystacks and prominent but non-functioning Ferris wheel on the far side of the Yalu. Dandong is the main point of cross-border traffic between China & North Korea and the point at which you cross if you take the train from China to Pyongyang. It’s home to a sizeable Korean population, including both ethnic-Korean Chinese citizens, and North Koreans working in official North Korean restaurants (not to mention the shadow population of North Koreans there illegally), and many Chinese like to visit and look across with pity at their destitute neighbours. 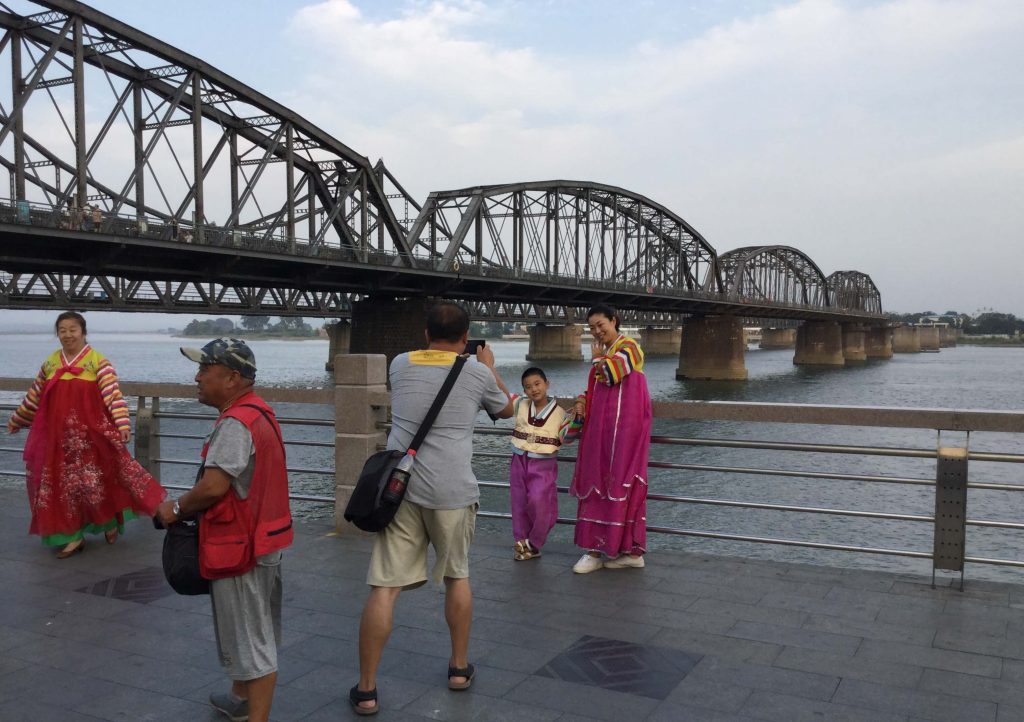 Photographers rent Korean hanbok to Chinese tourists in which to pose with North Korea behind them, and as well as the functioning bridge you can see and walk out along the half-destroyed bridge next to it, which comes to an abrupt stop halfway out over the river. A short distance out of town stands the Bridge to Nowhere, a massive monument to how ridiculous North Korea is; I’ve seen it and it’s huge, but the Korean side just stops in a field! Having stayed in Dandong I don’t think it’s worth travelling long-distance for, but it would make a decent day-trip on the new bullet trains from Shenyang or Dalian; it’s also a port of arrival for ferries from Incheon, South Korea (though having done both I can say the Incheon-Dalian ferry is a far more pleasant experience. See here for details on China-Korea ferries)

Changbaishan (长白山, Long White Mountain) is a popular tourist attraction in China’s Jilin Province. It’s home to one of the country’s best ski resorts, and Heavenly Lake in the volcano’s summit caldera lies half in China, half in North Korea. Bus tours up from the Chinese side allow you to see an amazing view while looking across at North Korea (hiking up isn’t permitted – this is apparently one of those Chinese nature experiences with the nature parcelled up and presented in overpriced & rigid options to tourists). In Korean the mountain is known as Baekdusan, and is of great significance in Korean mythology as the birthplace of the Korean people.

The easiest way to visit Changbaishan is by bus from the city of Yanji, which itself sounds quite fascinating as it’s a largely ethnic Korean city i.e. Chinese citizens of Korean ancestry. Yanji can be reached by bullet train from Shenyang in 4 hours, and there’s even one daily bullet train direct from Beijing in 10 hours.

The remote river border where China, North Korea, and Russia all meet can be visited from both China and Russia. From the Chinese city of Hunchun, take a taxi down to Fangchuan and there’s an observation tower with views into North Korea (see this blog post for pics). On the Russian side, the small town of Khasan is a few hours from Vladivostok; the views apparently aren’t as good as you get from China (see here; the relevant entry is halfway down the page)

This isn’t an exhaustive list – there are actually many points along the border where you can get a good look at North Korea (and according to some reports even walk over, though that’s probably not the brightest idea!), the above are just the most obvious ones.

Well, there are many possible futures for the Korean Peninsula, with the worst-case scenario being nuclear conflagration. Hopefully that will be avoided! The best-case scenario would be a bloodless transition to democracy (as far-fetched as that seems right now), with Korean unification following should both sides wish it. Unfortunately the North Korean regime is unlikely to step aside without a fuss, making some sort of messy collapse more likely at some point or other; in such a scenario, we can only hope cool heads prevail and that once the dust settles a unified Korea (or a perhaps an independent but democratic North Korea) emerges.

Of course there’s a lot more at stake in Korea than people wanting to travel there! But from the point of view of this blog’s focus – overland travel – an eventual unified Korea would present some excellent opportunities. The Korean KTX bullet train system would presumably be extended throughout the North, with through service a possibility from Beijing all the way to Seoul and Busan; train travel would also become viable from Russia right through. Perhaps we’d even then see some Trans-Siberian trains running from Moscow to their terminus in Busan. Who knows when or if this will ever happen, but if I’m still around when it does I’ll be heading there to test the routes out!