Malaysia is a popular stop on the Banana Pancake Trail with its natural beauty, tropical islands, mountains, diverse people and cuisine, well-developed infrastructure, and the region’s best budget airline. Its position neighbouring Thailand, Singapore, Brunei, and Indonesia makes it simple to travel through Malaysia overland as a leg on your trip round SE Asia.

How to travel to & from Peninsular Malaysia overland

The Singapore – Malaysia crossing is very straightforward, consisting of a causeway (plus a highway bridge) connecting the island city of Singapore to the Malaysian coastal city of Johor Bahru. Direct buses run between Singapore and Johor, Kuala Lumpur, and other major cities in Malaysia (see here); the international trains also run across the causeway. 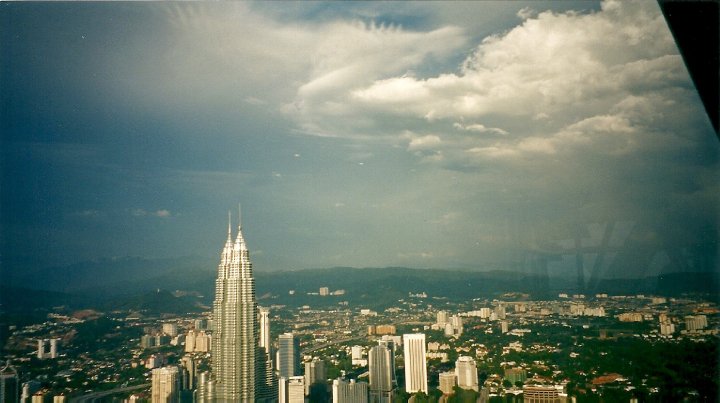 The main border between Malaysia and Thailand is at Padang Besar (on the highway between Penang and Hat Yai), towards the western end of their shared border. Any bus you take from KL, Penang, Butterworth etc to Thailand will cross here, and the crossing itself is pretty smooth in my experience having done it twice (although the minivan ride was lousy overall on one of those occasions). You can book road transfers between Penang and the southern Thai islands here. If travelling by train, this is also the crossing point – due to changes made in 2016 (upgrades to the railway in Malaysia), there are now no through trains from Malaysia to Thailand i.e. you change trains at the border. Rather than explaining this in detail here using the information on the awesome Seat61, it’s better just to give you the link! Seat61 has it all worked out and clearly explained, as usual, timetables and all.

There is also a crossing on the other side of the peninsula near the east coast, just north of the Malaysian city of Kota Bharu; this is not recommended. It’s a (usually low-level) conflict zone, and I once accidentally spent a night stuck at the border there after a very nerve-wracking bus ride of army checkpoints and jumpy-looking soldiers pointing their guns in at us, after getting screwed at the bus station in Hat Yai where I thought I’d bought a ticket right through to Malaysia. Thankfully a policeman at the border put me up for the night, served me a plate of boiled eggs and rice which went down better than any gourmet meal, and even took a break from his (evidently quite prolific) porn-surfing to let me send an email to the friends I was trying to catch up with that night.

Anyway, the moral of that story is that if you want to go from Hat Yai to the Perhentian Islands, even though the Kota Bharu border looks sensible on the map it’s a better and safer journey to go to Penang first and head to the islands after that (perhaps via the Cameron Highlands). If you do really want to go for that eastern border crossing, leave Hat Yai in the morning to be sure you make it across before it closes for the night, and make sure you check the current situation is clear (ask the police, not the bus companies).

Finally for Thailand – Malaysia overland it’s also possible to go by sea, with ferries from Malaysia’s Langkawi island to Ko Lipe in Thailand; Langkawi is connected by ferry to Penang and to the mainland. On the Thai side, Ko Lipe has ferries to other Thai islands like Ko Lanta, Ko Phi Phi, and Phuket. This means you can get all the way from Penang to Phuket by island-hopping along the coast; I haven’t done this route myself, but it looks and sounds great – slower than the bus of course, but taking in a string of beautiful islands en route. For these Langkawi & Ko Lipe ferries you can book online with Direct Ferries.

Peninsular Malaysia is also connected by ferry to the Indonesian island of Sumatra. There are many routes, but the main ones are between Melacca (a good place to visit in its own right) and Sumatra’s Dumai, and the short-distance ferries from Johor Bahru (and also Singapore) to the small Indonesian islands of Batam and Bintan. There used to be a ferry between Penang and Medan (I used it twice) but that has ceased operating due to competition from budget airlines (booo!)

How to travel to and from Malaysian Borneo overland

Malaysian Borneo consists of two states – Sarawak and Sabah – on the north Borneo coast. The small country of Brunei is sandwiched between these two Malaysian states, and the Indonesian province of Kalimantan to the south covers the major portion of the island. The Sarawak state capital, Kuching, is connected to West Kalimantan provincial capital, Pontianak (Indonesia), by road; this is the only official land crossing you can use, and buses run between those two cities. At the far end of the border, you can cross from Sabah to East Kalimantan by ferry between Tawau (Malaysia) and Tarakan (Indonesia); Tawau is located near Semporna (the base for diving Sipadan), and from Tarakan you can go to Derawan, an Indonesian diving location I’ve been told is even better than Sipadan (it’s apparently a great place for diving with manta rays).

There is also an international ferry between Malaysian Borneo and the southern Philippines. This ferry runs between Sandakan (Sabah, Malaysia) and Zamboanga (Mindanao island, Philippines), and it’s an overnight crossing (I almost took it once when leaving the Philippines, but ended up flying to Bangkok instead). Be aware that this ferry crosses the Sulu sea, an area home to pirates and terrorist groups; crew members have been kidnapped from commercial shipping vessels in the recent past, and you might want to take this into account when planning your route. If you do still want to take this ferry you should definitely check the latest news on the security situation in the area; it’s operated by Aleson Shipping, here’s their website, but good luck working the schedule out!

The Pan Borneo Highway runs the whole way through Sarawak and Sabah, also passing through Brunei meaning you can take the bus to Brunei from either of the Malaysian states; however for Sabah – Brunei it’s actually faster to take the ferry, as the road has to deal with some inconsiderate geography. See my Brunei page for more details.

Malaysia has an excellent road system and buses run to all points. It also has a good railway which connects the major cities of Peninsular Malaysia, and ferries to its various islands (e.g. Langkawi, the Perhentians, Tioman, etc). There is also a single railway line in Sabah, Borneo, useful if you want to see a bit of the Sabah interior.

There aren’t any ferries between Peninsular Malaysia and Borneo; it is possible to go overland between the two parts of Malaysia, but only by taking a very involved detour through Indonesia i.e. starting from Kuala Lumpur you’d take the ferry to Sumatra, then travel overland through Indonesia to Kalimantan (this would involve a long Indonesian domestic ferry crossing from Sumatra or Java to Borneo), then overland from Kalimantan to Sabah or Sarawak.

Borneo – climb Mt Kinabalu and visit the Sepilok Orangutan Rehabilitation Centre, and if you’re a diver you’ll already be well aware of the world famous Sipadan.

Kuala Lumpur – the country’s capital has plenty to see and do, and I had a great time on both of my visits there.

The Perhentian Islands – beaches and scuba diving; much more chilled out than the popular islands up in Thailand.

Search for hotel deals in Malaysia. If you’ve never used Airbnb before you can get a 30 dollar discount if you sign up with this link

World Nomads offer flexible travel insurance that you can buy even if you’re already overseas (this is a key point, as I once learned the hard way when I got pickpocketed in Bangkok). Also check out their scuba cover if you’re planning on some diving.

(This page contains affiliate links i.e. if you follow the links from this page to Amazon, 12go.asia, or World Nomads and make a purchase, 4corners7seas will receive a commission from them. This commission comes out of their profit margin at no extra cost to you. I’m recommending these products and services from personal experience, and thank you in advance should you choose to purchase them via the above links)