Inwangsan and Bugaksan are a pair of small neighbouring mountains just north of central Seoul, looking down on Gyeongbokgung Palace and the Blue House (the presidential residence).

Although not particularly big (338m and 342m), they’re rich in cultural and historical interest; the Seoul Fortress Wall runs across both mountains (the wall’s Changuimun gate forms a starting / finishing point for both), Inwangsan has religious significance and shamanic rituals are still performed there, and Bugaksan was the site of a gun battle when North Korea sent a commando unit to assassinate the South Korean president in 1968; Bugaksan was completely off-limits to civilians until 2007 and while it’s open today access is still controlled and both mountains have a heavy military presence. This unfortunately means you can’t take photos of most of the best views, and the guards posted at the many watchtowers do keep a close eye on hikers to make sure you don’t do so (or accidentally go off into any restricted areas, though that’d be hard anyway what with all the barbed wire and warning signs in the way); to access Bugaksan you have to take your passport (or Alien Registration Card or Korean national ID, should you have either) and register at the entrance.

As for the 1968 North Korean assassins, they were caught on Bugaksan where two South Korean policemen died in the immediate firefight (and are commemorated in memorials near the mountain), and over the following days the North Korean unit of 31 was all killed (except for one individual who escaped back to North Korea and is today a North Korean army general, and another who was captured and is now a South Korean citizen and church minister) while another two dozen South Koreans (soldiers and civilians) and four American soldiers were killed. Serious stuff, and the bullet holes can still be seen on a tree next to the trail (see pics in the Bugaksan section here)

You can hike both mountains individually (they each take about two hours), or string them together for a half-day hike. If you just want a quick & easy hike up & down, I’d suggest hiking up Inwangsan from Dongnimmun Station then descending the same way (about 90 minutes). For a longer hike you can go down the other side to the Changuimun gate, and from there either walk (or take a bus, see below) to Gyeongbokgung Station; or you can keep going and continue up Bugaksan. It’s a short, steep climb up Bugaksan from Changuimun, and you can be up & back down in an hour. Alternatively, you can hike on to (or from) the trailhead at Waryong Park, which is reached from Anguk Station, again either on foot or by bus (see below).

The route sticks to the Seoul Fortress Wall most of the way (except through the residential districts at the start & near Changuimun gate), so navigation is pretty straightforward. Starting from Dongnimmun Station, come out of exit 2 and turn left at the 7-Eleven towards the monolithic Hyundai Apartments:

Find your way up through to the back of the high rise blocks, and you’ll catch your first glimpse of the wall behind them. Don’t head straight for it though, but instead bear left and make for Inwangsa (인왕사, Inwang Temple). Signs are dotted around to point you in the right direction: 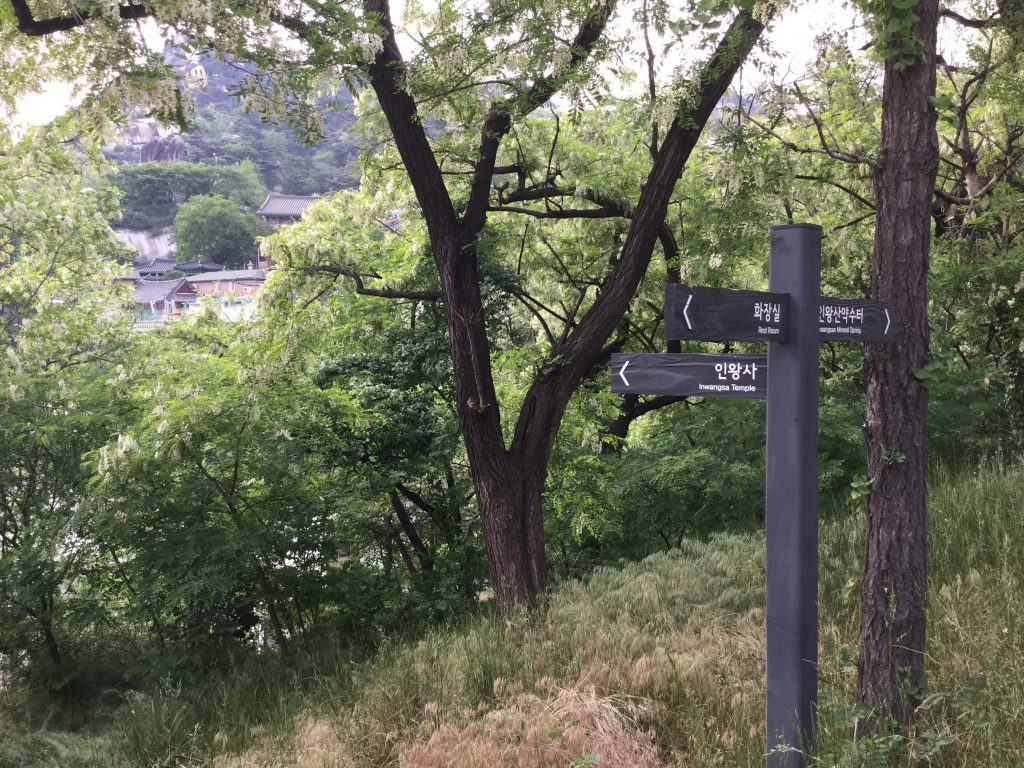 The approach to the temple area has some interesting wall murals. Local legend associates the mountain with fearsome tigers, hence this one: 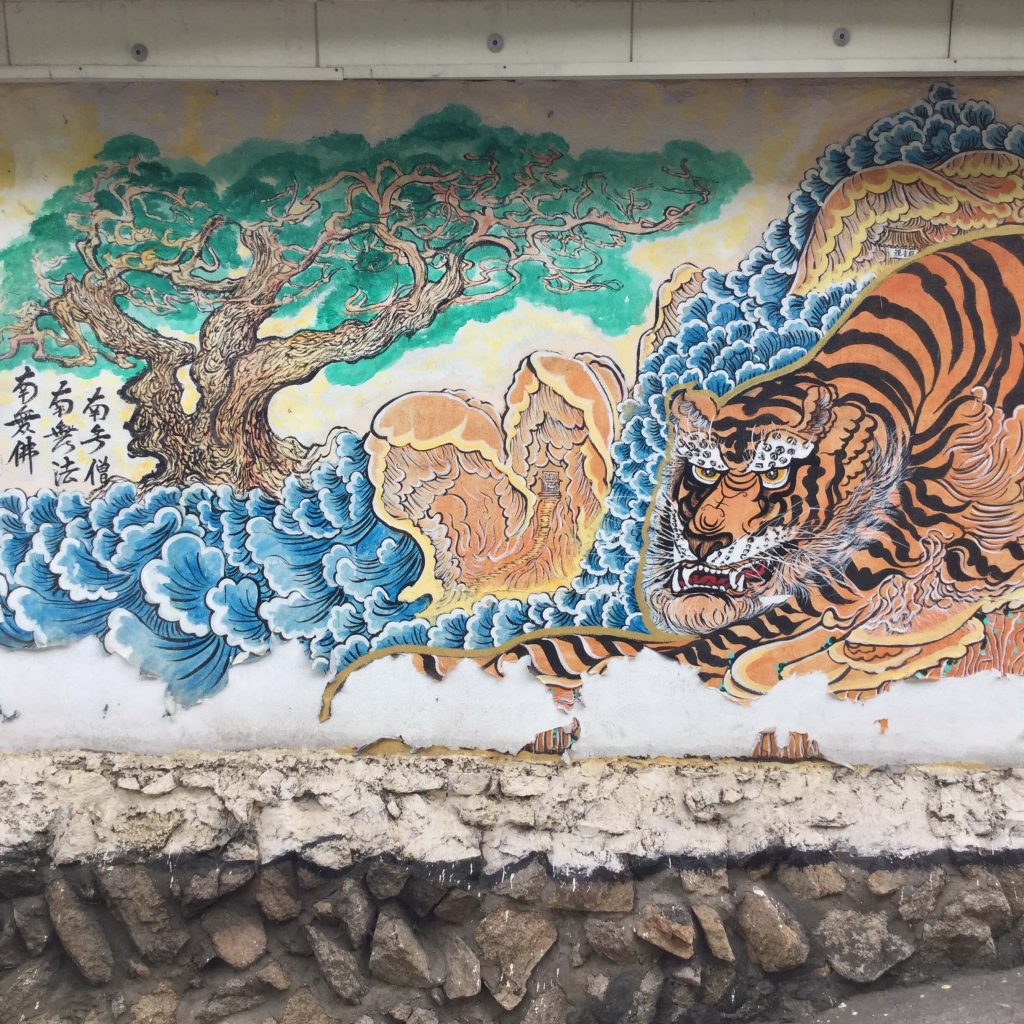 Above Inwangsa you’ll find the Seonbawi rock, an interesting formation said to bestow fortune on expecting mothers; you’ll often see women deep in prayer there, and it feels a little intrusive to linger so I’ve only photographed the rock from the rear: 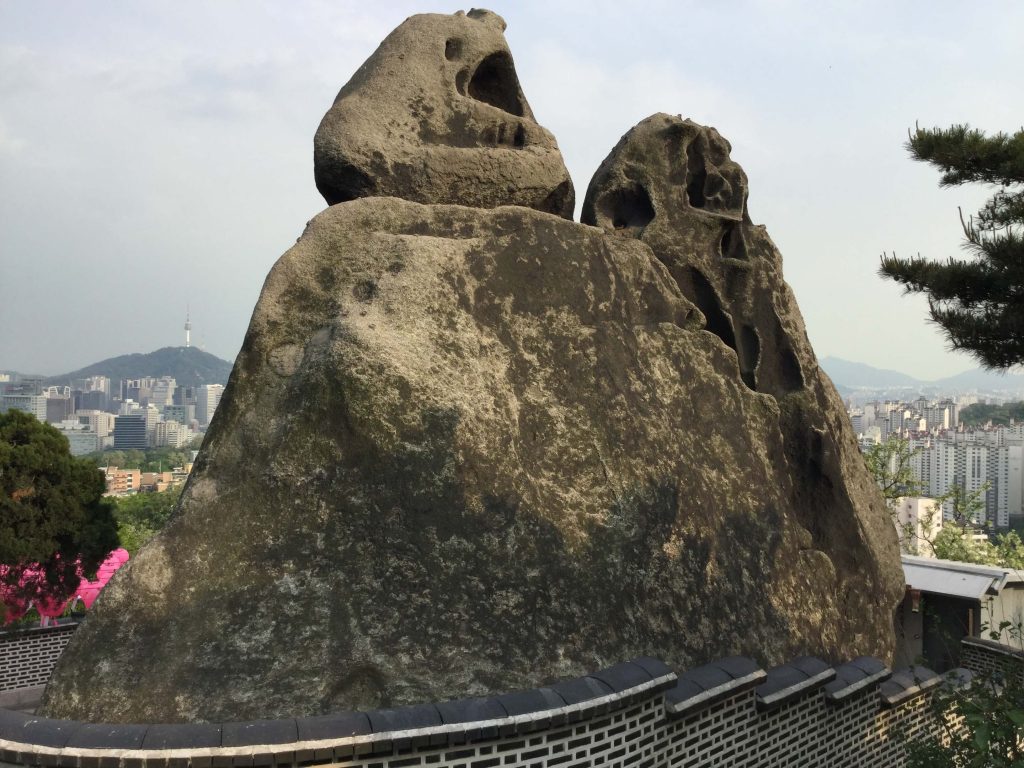 From Seonbawi you have a view down to the Seodaemun Prison: 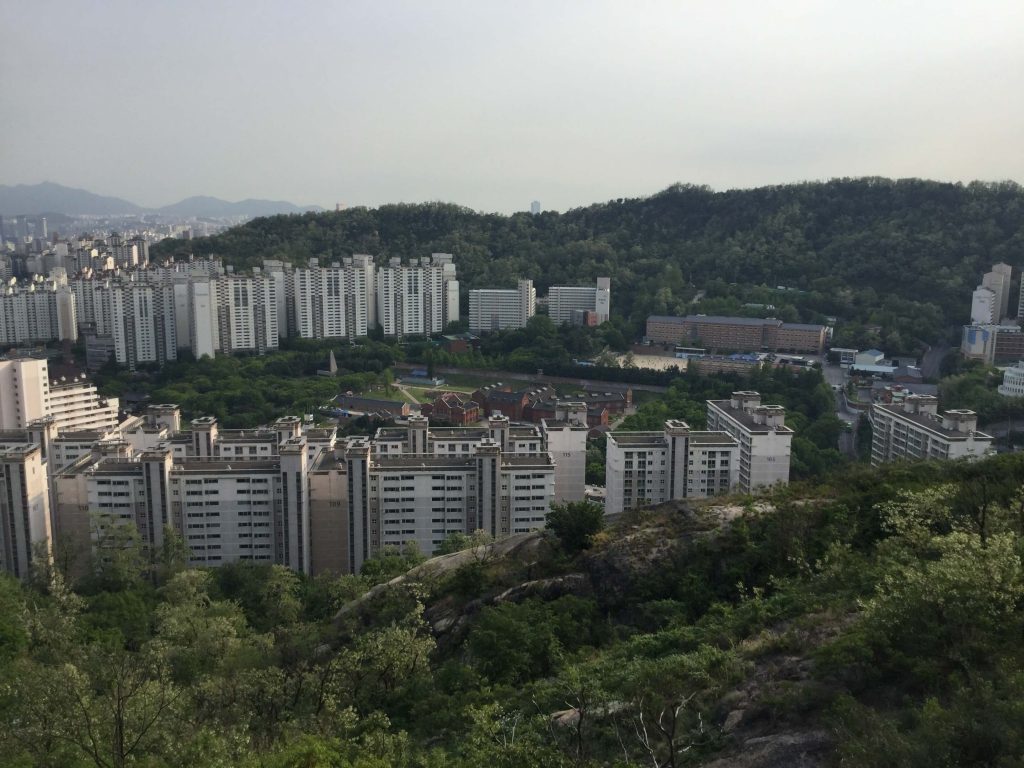 (Seodaemun Prison was used by the Japanese government of Korea (1910 – 1945) for the internment, torture, and execution of independence activists; it’s been preserved as a (fairly gruesome) museum, and if you’re interested in the history you may want to visit before starting your hike. It’s immediately outside Dongnimmun Station exit 4, where you’ll also find the Independence Gate)

Slightly further up from Seonbawi I also once witnessed a shamanic ritual, perhaps a blessing or an exorcism; the recipient stood while the shaman rapidly circled her, waving flags around her body and reciting incantations while a robed man knelt close by keeping the rhythm on a large drum, one woman utterly still as the other was all swirling motion. Again, it felt a little intrusive to linger and I felt I perhaps shouldn’t take any pictures of the scene.

Not far past the Seonbawi rock you ascend a flight of steps to the Fortress Wall, and then it’s a simple matter of following the trail up next to the wall to the summit. If you’re continuing on down the other side, again the route is clear save somewhat for the bottom section as the trail passes through a corner of suburbia. Just keep following the signs for Changuimun (창의문): 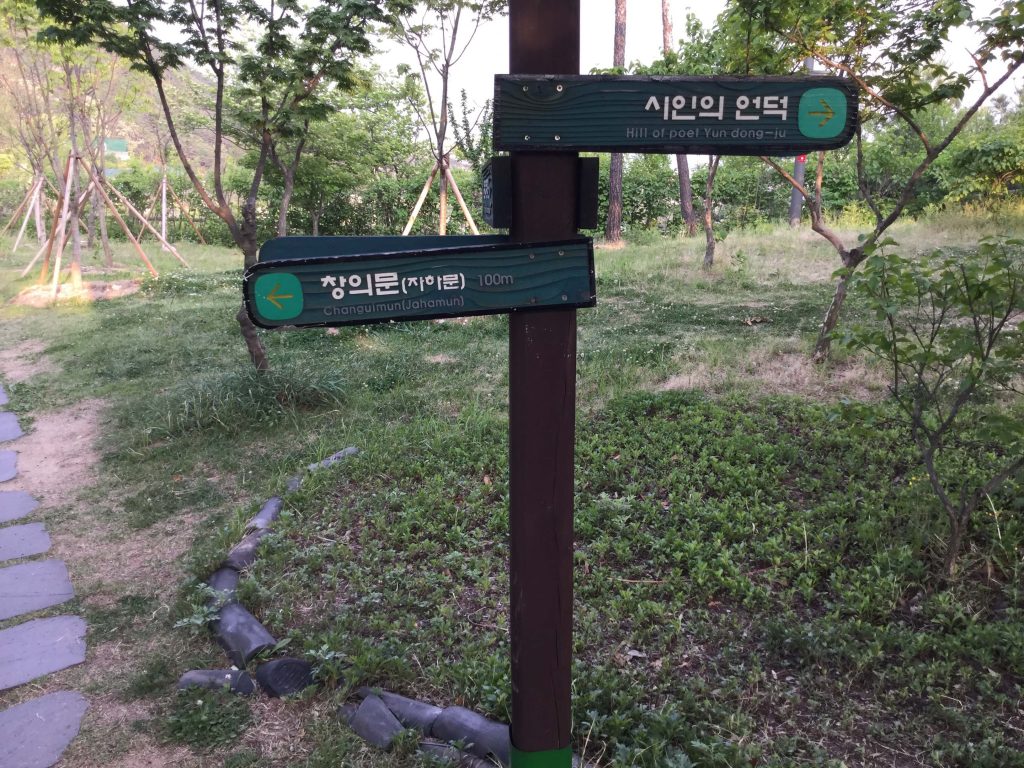 Once at Changuimun, you can either end the hike by jumping on the bus to Gyeongbokgung Station (or walk the 3km south to the station), or register at the gate to hike up Bugaksan (you have to be off the mountain by 6pm, or 5pm in winter, so make sure you’re in good time; you can get up & back down to Changuimun with an hour of huff & puff, or from Changuimun to Waryong Park in about 2 hours).

Again, the route is straightforward as you’re simply following the Seoul Fortress Wall to the top (and then again down the other side if you continue to Waryong Park). Keep your eyes out for the bullet-ridden tree along the way; see here for pics & report on hiking Bugaksan from Waryong Park to Changuimun, and here for further information on the Inwangsan & Bugaksan sections (along with all the other sections)

Changuimun gate is reached by bus numbers 1020, 7022 or 7212 from Gyeongbokgung Station exit 3 (the bus stop is called Jahamun); alternatively, it’s a 3km walk along Changuimun-ro and Hyoja-ro (they’re reasonably pleasant roads to walk along, passing the outer wall of Gyeongbokgung).

Dongnimmun Station, Gyeongbokgung Station and Anguk Station are all on Line 3 (the orange line on the map).

Have you climbed Inwangsan or Bugaksan? How was it? Any questions? Give me a shout below and I’ll get back to you.

Also make sure you have a good insurance policy… World Nomads offer flexible travel insurance you can buy even if already overseas – most travel insurance companies won’t cover you if you’ve already left your country, and this can be a crucial point as I once found out the hard way in Thailand