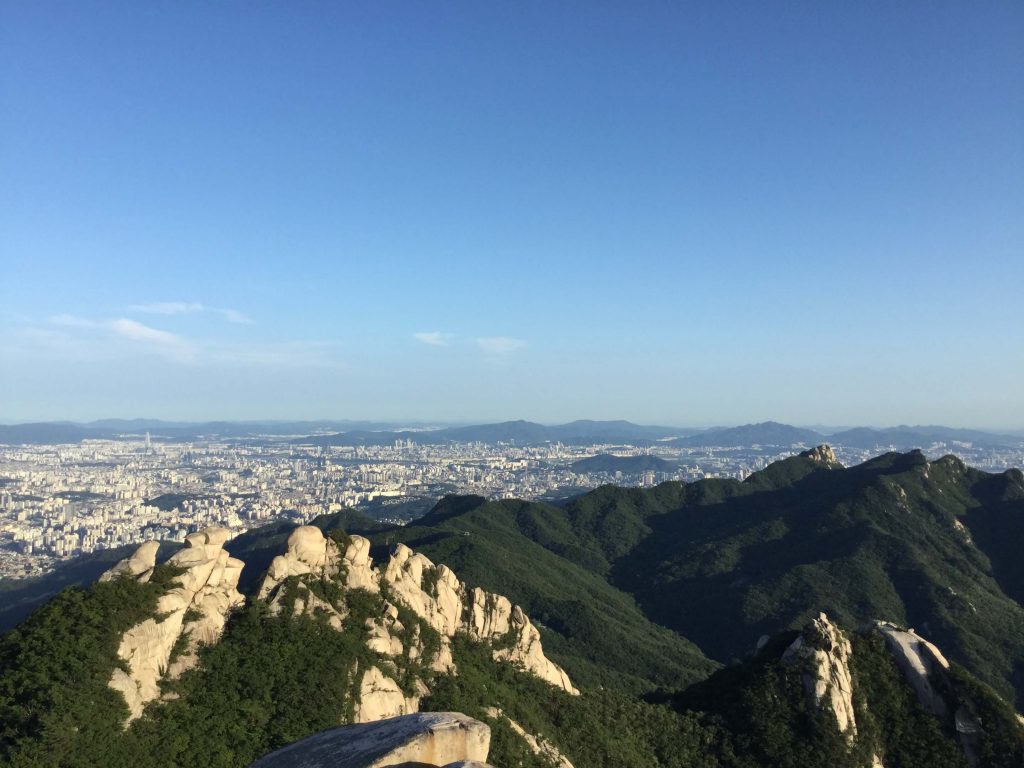 View from the top of Seoul’s highest peak, Bukhansan

Korea was a country I never knew much about before my first visit, and even then I only made that first visit because Korea was a stepping stone on my overland route from China to Japan after doing the Trans-Siberian Railway. I went there with no expectations and found a place I really liked (the food especially was a revelation!), and I’ve made repeated visits since while moving between Japan, China, and Taiwan, including spells living there for snowboarding and running Snow Guide Korea.

Seoul’s a buzzing place with great hiking right in the city, excellent transportation, lively nightlife, awesome food, and snowboarding close at hand; it ticks all the major boxes!

As mentioned above, Korea’s position between China and Japan makes it a useful stepping stone on overland routes around NE Asia, with ferries plying a variety of routes to both.

How to travel to and from (South) Korea overland

Although the Korean peninsula is physically connected to China and Russia, South Korea is effectively an island due to the political situation. With it being impossible to travel there by land, overlanders must go by sea. Fortunately, there are plenty of options:

There are over a dozen ferry routes from northern China to ports on Korea’s west coast (chiefly Incheon, next to Seoul). The most useful for overland travellers are Incheon-Dandong, Incheon-Dalian, Incheon-Tianjin, and Incheon-Qingdao; see my China-Korea ferry guide for full details on these routes.

For Japan, the routes are all through Busan, SK’s second city and largest port, on the south-east coast. High speed hydrofoils run between Busan and Fukuoka in just a few hours, while slower car ferries run from Busan to Fukuoka, Shimonoseki, and all the way to Osaka. The Busan ferry terminal is just a 10-minute walk from the main Busan train station where the KTX terminates. See my Korea-Japan ferry page for full details on all these routes.

There used to be a ferry to Russia (and Japan) from Donghae, but it stopped service in 2019. 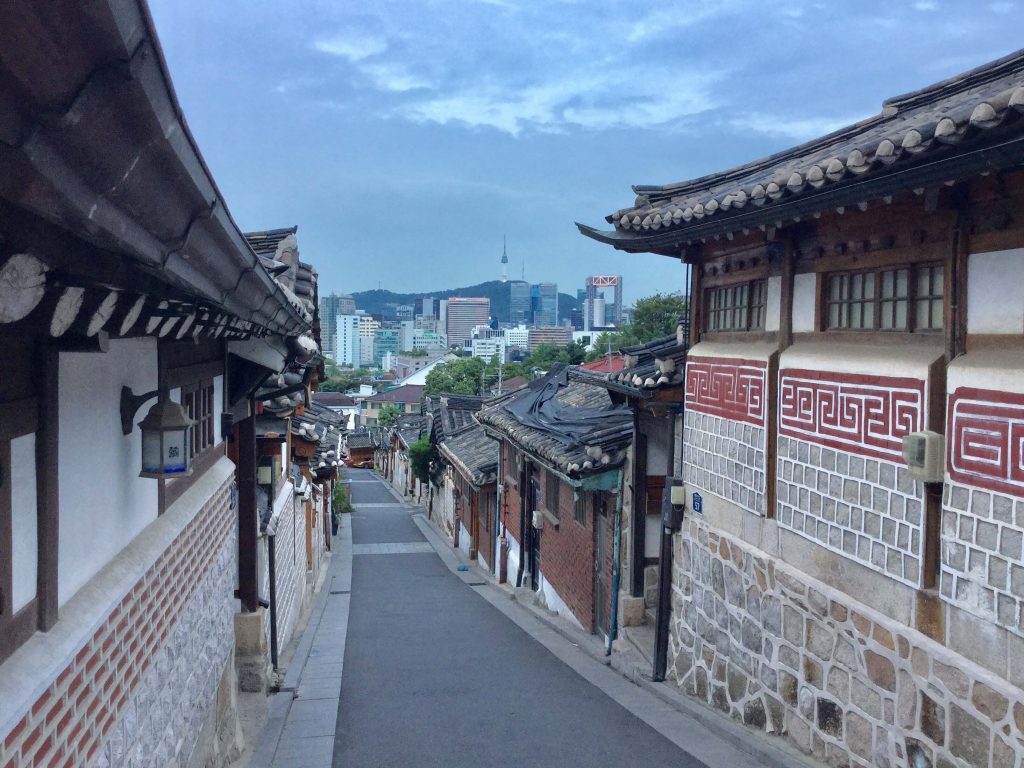 Bukchon Hanok Village, with Namsan & Seoul Tower in the distance

Korea’s public transportation is excellent, with well-developed road and rail networks. The KTX high speed rail connects the major cities and covers Seoul to Busan in under three hours for around 60 dollars; a highway bus does Seoul-Busan in six hours or so for half that price.

You can easily buy train tickets on the day from the ticket machines or manned ticket counters at railway stations, but trains do sell out (especially during peak hours & on holidays) so if you want to be sure of a seat on a specific train it’s better to book in advance. Again you can do this in person by visiting a station, or you can try booking online on the official Korail site; depending on your browser or your credit/bank card it may not work for you, in which case try 12go Asia for a more international-friendly and generally more user-friendly experience (there’s usually a small markup e.g. a couple of dollars on Seoul-Busan tickets, but Trip is sometimes actually cheaper than the official price)

Likewise bus tickets can usually be bought without trouble at the terminal on the day, but during holidays it’s absolutely necessary to book days in advance. The official site only takes Korean bank cards unfortunately and the various apps available are still lacking English language support, so to book an advance bus ticket you’ll probably have to visit the bus terminal (the enormous Express Bus Terminal near Gangnam is the best bet for the majority of routes)

There are ferries to Jeju Island leaving from various southern ports (listed here), local ferries to myriad offshore islands, and if you want to visit the controversial Dokdo (for all of 20 minutes) it’s a ferry from Pohang or Mukho (Donghae) on the east coast to Ulleungdo, and then a daytrip by boat to Dokdo from there. 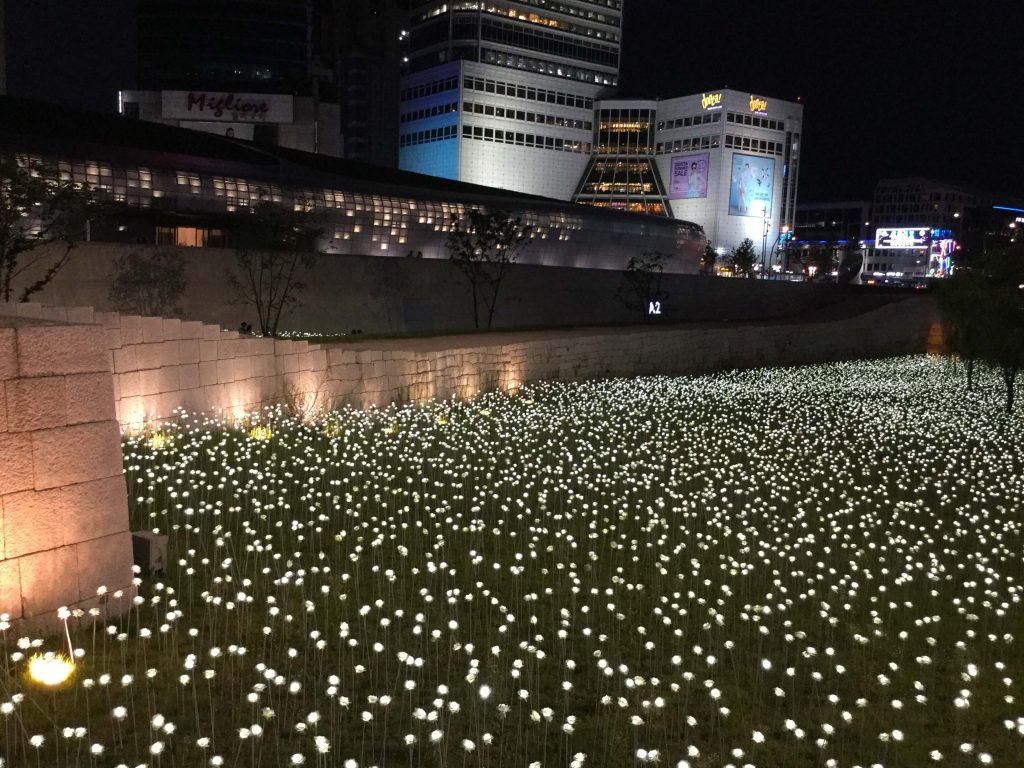 Go skiing. Korea is home to fifteen ski resorts, and the county of Pyeongchang hosted the 2018 Winter Olympics. The best skiing is in Gangwon-do province (where Pyeongchang is located), around 90 minutes from Seoul by KTX. If that’s too far, there are some smaller hills closer to Seoul which you can reach using free resort shuttles or city transport.

Go hiking – this is an extremely popular pastime in Korea, and the weekends see armies of Gortex-clad elderly Koreans marching up the mountains – and often then off-setting the health benefits with bottles of makgeolli (a fermented rice drink) on the summit! The country consists almost entirely of mountainous terrain, and you can do some really satisfying day hikes without even leaving the city.

Eat. Korean cuisine is one of my favourites; spicy, hearty, and full of robust flavours, it gets straight down to business and doesn’t mess around. I love it!

get drunk. Korea knows how to party, and drinking is not done in moderation; you may be on holiday, but get drinking with the locals and your liver will be working overtime. Soju is a rough rice liquor drunk entirely for the alcohol content and not the taste, and downed by the shotload; you will be expected to drink your share!

Take a DMZ (De-Militarized Zone) tour to the heavily fortified border with the north. Not only do you get a fascinating glimpse into the hermit state, you can actually cross the border and stand on North Korean soil (though entirely within the confines of a negotiation building straddling the demarcation line)

Check out the royal palaces and shrines in central Seoul, and the traditional housing in areas like Bukchon Hanok village.

Take a stroll along Cheonggyecheon, a restored stream running through central Seoul that was formerly covered over by a highway before being uncovered and spruced up in an urban revitalisation scheme.

The Seoul based travel agency Trazy also has loads of cool little day tours and cultural experiences you can try while you’re in Korea, especially in & around Seoul; you can search their offerings here 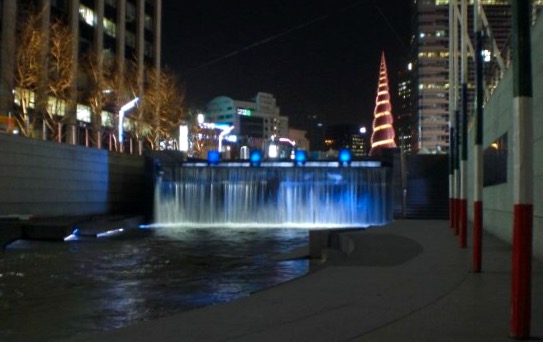 All my Korea posts here

Search for hotel deals in Korea. Airbnb’s also a great option in Korea, if you’ve never used it before you can get a 30 dollar discount if you sign up with this link

Flexible travel insurance from World Nomads, especially useful if you’re already overseas (this is an important point, as I once learned the hard way in Bangkok). For those hitting the slopes, check out their winter sports cover.

For hiking inspiration, check out my guide to hiking in Seoul

See the Korail website for train timetables & reservations; if you’re unable to make a booking there, 12go Asia is reliable and reasonable.

Seoul Sub→urban is a fun blog which explores Seoul one subway station at a time, visiting the surrounds of one station per post. It’s a work in progress, and they’ve covered about half of the system so far; as well as being entertaining, it’s also actually a pretty useful way of checking out an area you’re looking at on Airbnb, for example. I particularly like their take on Jamsil Station and the People’s Republic of Lotte

(This page contains affiliate links i.e. if you follow the links from this page to World Nomads, Direct Ferries, or Amazon and make a purchase, 4corners7seas will receive a commission from them; this commission comes out of their profit margin at no extra cost to you. I only link to products and services I personally know and use; thank you in advance should you choose to use the above links)