Berastagi is a small town in the highlands of northern Sumatra, Indonesia, near the city of Medan and the popular travel destinations of Lake Toba and Bukit Lawang. It’s primarily known for its close proximity to two active volcanoes, Gunung Sibayak (2,212m) and Gunung Sinabung (2,460m). Both of these volcanoes make for good day-hikes, but the latter has been extremely active in recent years (especially in 2013 & 2014), with eruptions causing mass evacuations and a number of fatalities – in other words, if you want to go hiking in Berastagi it’s going to be the Sibayak volcano climb, with Gunung Sinabung off-limits for the time being until it settles down.

On my first visit to Sumatra with my friend Dan (years before Sinabung’s outbursts), we went to do some Berastagi hiking after visiting Lake Toba and opted to climb Gunung Sibayak, which is the more straightforward of the two as it’s a bit smaller and the walking trail starts higher up the mountain, and it’s also closer to town so easier to reach. I would usually have preferred to go for the bigger mountain, but we were intending to climb Mt Kinabalu a few weeks later so this was more about climbing a volcano and looking into a crater for the first time than it was about how challenging the hike was. A few years later some friends of mine did climb Sinabung (before the recent spate of eruptions started) and said it was pretty tough – but Sinabung will be best observed from a distance for the foreseeable future. In fact I’ve read that Berastagi has seen a big increase in visitor numbers due to the ongoing Sinabung eruptions and there are a number of popular viewing points from which to observe the action… although I have seen gas billowing out of the crater of Vulcan Concepcion from up very close, I’m yet to see a full volcanic eruption (though not for lack of trying) so will definitely head back to Berastagi if I visit Sumatra again. 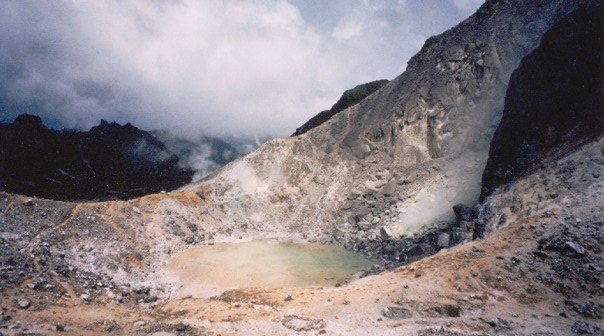 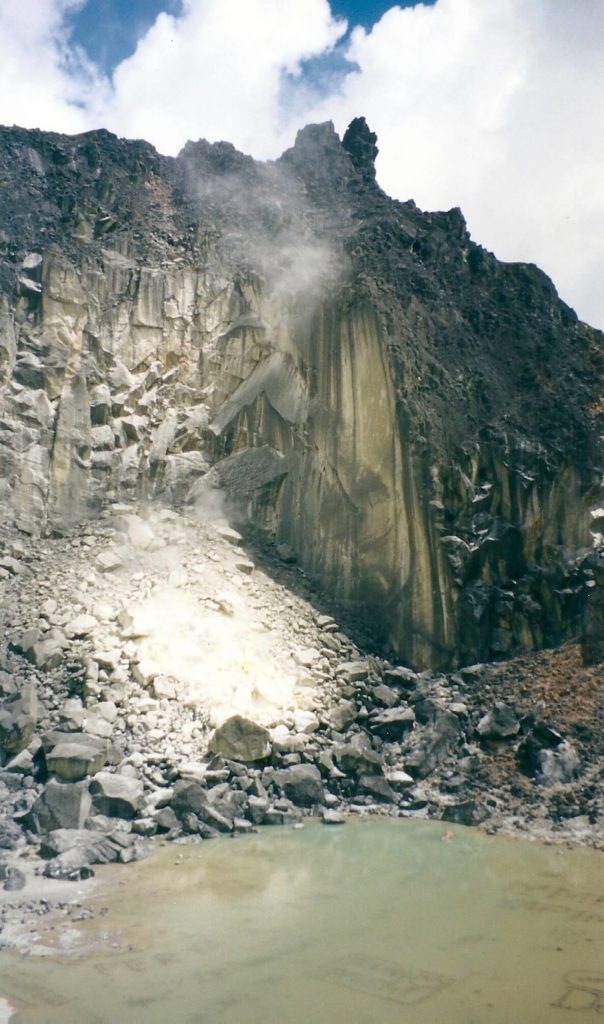 The Sibayak volcano climb can be started by walking from the town itself, or you can take a bus to the trailhead proper. Feeling lazy, we opted for the latter – either way, be sure to get maps and directions from your guesthouse. The trails on the mountain aren’t so well marked or maintained so don’t rely on being able to just walk up the hill and work it out as you go – it would be easy to get lost. As Berastagi is at an altitude of around 1,300m, and the bus takes you up a bit higher from there, the walk up to 2,200m isn’t particularly strenuous – nor is it particularly interesting at first, as it’s partly just up a road and the views don’t really open up until you get to the top. Once up there, though, you are treated to some lovely views of forest-clad mountains (including Sinabung) stretching away on all sides, and while the crater isn’t the most dramatic I’ve seen (having since looked down into two volanic craters in Japan – Mt Aso and Fuji) it’s still interesting. 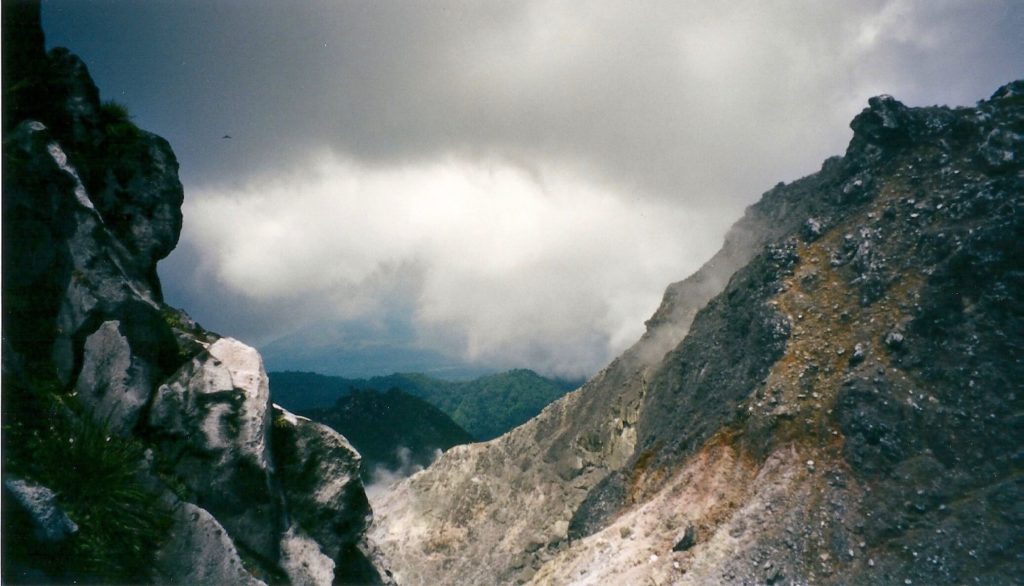 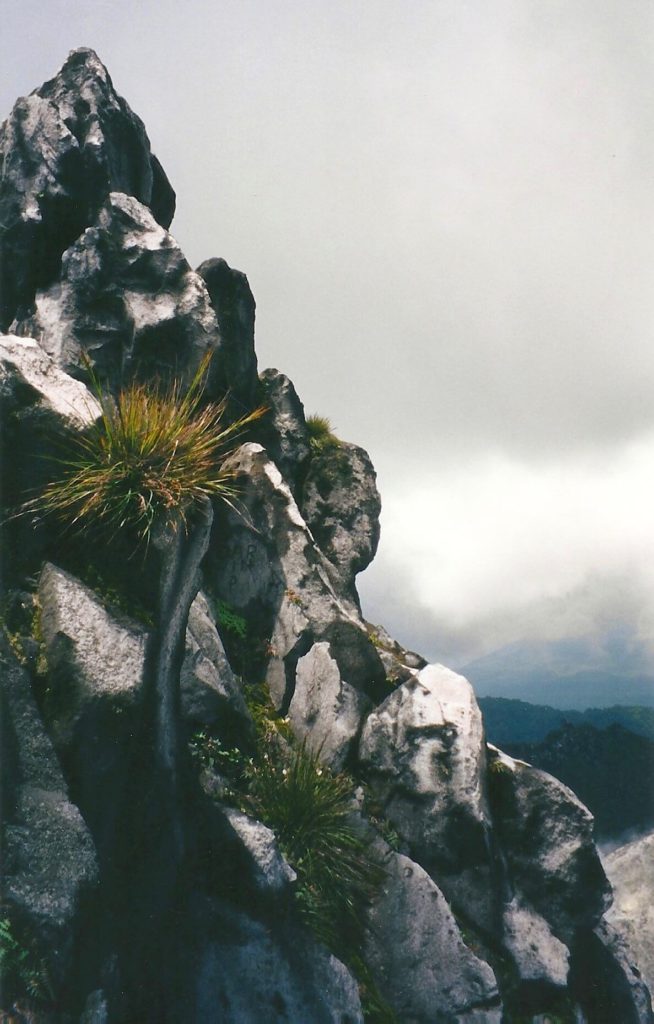 To descend we went down the other side of the mountain in order to reach the hot springs at Semangat Gunung, but it was rainy season and as we were on our way down the heavens opened and gave us an absolute soaking – by the time we reached the bottom we had no desire to be any wetter than we already were so gave the springs a miss and caught a minivan back to town… our fellow passengers were a group of local schoolgirls who found themselves in a difficult conflict between their curiosity and their shyness, the result being that they were trying to surreptitiously take photos of Danny and I without looking at us directly. We rumbled them and turned our own cameras on them, resulting in much hilarity and this photo which always amuses me: 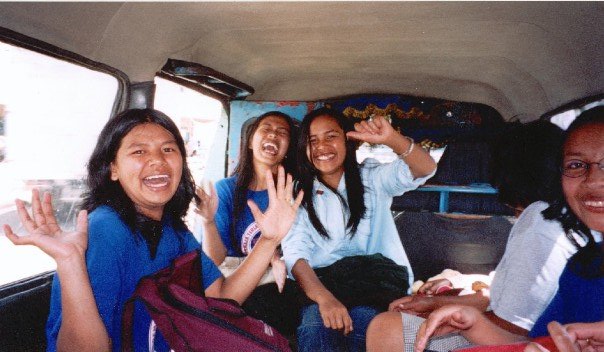 Gunung Sibayak is probably one of the easiest volcanoes you can hike up – though there are many you can go up by cable car (e.g. Japan’s Aso-san) or road (e.g. Costa Rica’s Poas) – and makes for a nice day out; combined with the chance to observe the ongoing volcanic activity of Gunung Sinabung, Berastagi makes for a good couple of days on your way to or from Toba or Bukit Lawang. (If heading to Bukit Lawang from Berastagi, see if you can arrange direct transportation and avoid routing through Medan. If you do go through Medan, go as early as possible – in my experience an evening journey from Medan to Bukit Lawang can be… interesting)

(Update: I’ve just been looking at some friends’ Facebook pictures from their recent Berastagi hiking trip, and the devastation on the slopes of Sinabung in the background is incredible – the vegetation has been completely erased by the lava floes)

Have you been hiking in Berastagi? What did you think? Any questions? Leave a comment below and I’ll get back to you.

Search & book accommodation in Berastagi here. Also, make sure you have a good insurance policy – World Nomads offer flexible travel insurance you can buy even if already overseas (most travel insurance companies won’t cover you if you’ve already left your country, and this can be a crucial point as I once found out the hard way in Thailand)