Beijing’s Fragrant Hills Park (香山公园, Xiangshan Gongyuan) is located in the Western Hills (西山, Xishan) on the edge of the urban sprawl, beyond the Summer Palace. It was originally for the private enjoyment of the privileged few, but these days serves as a popular spot for an outing from the city. As the city’s most famous place to view the red leaves, Fragrant Hills Park is especially popular in autumn – which was when I visited, though I was a little too late to catch the colours in their prime. This isn’t really a serious hike, just taking a couple of hours, but it’s nice to go for a walk, see the views, get away from the concrete (if not the crowds) of Beijing, and enjoy a little nature – even though the ‘nature’ at Xiangshan is somewhat pre-packaged. 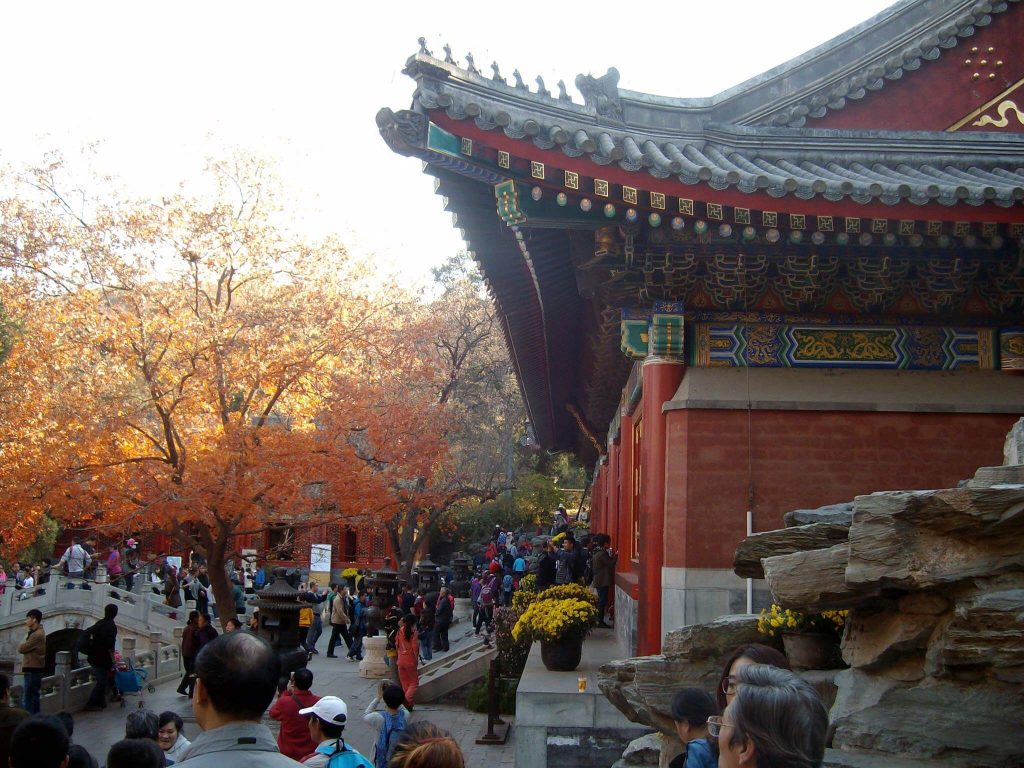 As is so often the case in China, this is a scenic spot which has been parcelled off behind high walls with an entrance gate and – you guessed it – a ticket window. Those looking for open countryside and the freedom to pick their own route through it won’t find that at Xiangshan; I suppose you probably can do some DIY hiking in Beijing, perhaps elsewhere in the Western Hills as it’s a large area with several famous mountains and temples, though I never investigated further. If you’ve done so, please leave a comment below and let us all know about it.

Once you’ve bought your ticket and entered the park, within the walls you’ll find a decent-sized area of forested mountainside dotted with a number of temples and pavilions. To get up to the top, you basically have two main route option so just head up one way and come down the other and you’ll catch all the main temples and viewpoints. The view from the top of Fragrant Hills Park back over Beijing is probably amazing – if you catch it on a clear day. The day I was up there, it was a ‘not-so-smoggy’ on the Beijing smogometer – the nearby Summer Palace and western suburbs were visible, but not the central city unfortunately (for great views of central Beijing, head up to the pagoda in Jingshan Park immediately north of the Forbidden City). I was also amused to see some enterprising locals near the top with a ladder over the wall – not sure how much they were charging or where it went though!

I was befriended halfway up the hill by a young chap who worked at the airport, with whom I did the rest of the hike. He helped me get on the right bus afterwards, and I later helped him (by email) with his English resume. It’s quite common to experience this sort of friendliness from strangers in China, in my experience especially when out hiking or riding long-distance trains; it’s a shame that the teahouses scammers, fake art students and so on that operate around Beijing’s Tiananmen Square & Wangfujing (and Shanghai’s Nanjing Road) often give China a bad rep for scams. Make sure you don’t make yourself an easy target for scammers in the known problem areas, but also try to be open to new connections so as not to miss out on the genuine interactions that will come your way.

To get to Xiangshan, I took subway line 4 to Beigongmen and then a bus from there (see here for details). The bus was absurdly packed, what with it being autumn leaf season; and the bus I took back in the evening (this time to Wudaokou, to meet friends and get drunk on shitty fake 5 yuan beers in the student bars) was even worse – thankfully, a subway line (the Xijiao Line) opened in 2017 with Fragrant Hills Park station as its terminus, making Xiangshan much more convenient (just take Line 10 to Bagou and transfer to the Xijiao Line).

Have you been hiking in Beijing? How was it? Any questions? Leave a comment below and I’ll get back to you.

These are affiliate links i.e. if you use them to purchase insurance, VPN service, or accommodation, 4corners7seas will receive a commission from them – this commission comes out of their profit margin at no extra cost to you. I’m recommending them because I know and trust them from personal use; thank you in advance should you choose to use my links.