Cambodia is a key stop on the SE Asian backpacker trail, thanks largely to its magnificent ancient ruins, especially those of Angkor Wat. Its recent history is also notable, though for its tragedy rather than its magnificence; Cambodia’s scars from the Khmer Rouge’s reign of terror are clearly visible – and it’s important to see them. To be marvelling one day at Angkor (feeling just a little bit like Indiana Jones), and then a couple of days later to be feeling numb at the Killing Fields and physically sick at the S-21 Tuol Sleng genocide museum is quite a contrast; but it’s that contrast, between such heights of artistic and architectural grandeur and such depths of utter horror, between the best and the very worst of what humanity is capable of, that makes your first visit to Cambodia so memorable.

How to travel to, from, and around Cambodia overland

Travel around Cambodia is mostly by road, with the capital Phnom Penh as the main hub. Road safety isn’t great (on my first visit to Phnom Penh our bus passed the scene of a recent accident, complete with what appeared to be a deceased scooter driver), nor is the quality of many of the vehicles; but the quality of the roads themselves has certainly improved. On my first visit to the Killing Fields, our tuk tuk bounced its way along an unpaved road, the red dust swirling up from under the wheels and into our faces; by the time of my second visit a few years later, that same road was fully sealed. Likewise on my first visit to Cambodia, the road to Siem Reap (near Angkor Wat) from the Thai border at Poipet was a nightmare; that too is now fully sealed.

(Although that journey was a real pain in the ass (quite literally, but also with a Siem Reap accommodation scam thrown in for good measure), my friend and I met two Aussies on that bus, a chance encounter which went on to have some unexpected consequences… but that’s a long story and one which I will probably never tell on this blog)

As well as the roads, there are recently restored railway services from Phnom Penh to Sihanoukville (for the beaches; see the excellent Seat-61 for details) and Poipet (on the Thai border). Additionally, there are boats plying the lake & rivers between Siem Reap and Phnom Penh (unfortunately the water level was too low when we visited at the height of hot season in May so the bus was the only option), and making the short crossings to Cambodia’s islands (which you can book online here).

There are multiple border crossings from both Thailand and Vietnam, most of which are fairly remote and don’t see many tourists; most overland visitors enter / exit via Poipet (for Bangkok) and the eastern highway border for Saigon.

For Vietnam, as well as the main crossing on the highway between Saigon and Phnom Penh you can also cross on the Mekong (by boat from Phom Penh to Chau Doc), and near Ha Tien on the coast (useful if visiting the Vietnamese island of Phu Quoc & Cambodia’s Kampot/Sihanoukville region)

As for Thailand – Cambodia overland, the Poipet border’s pretty notorious; if you don’t get scammed by a travel agent in Bangkok, you’ll get scammed in Aranyaprathet (the town on the Thai side of the border); and if they don’t get you, the Cambodian border guards will rip you off on the visa charges. After that, if you don’t have onward transportation pre-booked, you’re going to be dealing with the Poipet transport monopoly mafia; and if you do have transport pre-arranged, they will likely try to pull a Siem Reap accommodation scam on you. If you make it overland from Bangkok to Siem Reap without any of the above, you’ve done very, very well! These days the best way to deal with this border is a direct bus all the way through from Bangkok to Siem Reap with Giant Ibis, a massive improvement as you get back on the same bus after crossing; see here for details & booking.

Another fairly common crossing for backpackers is from Trat (near Koh Chang) along the coastal road; I haven’t done this one but it sounds much better than Poipet!

(The Phnom Penh-Poipet railway will soon also be restored across the border to Aranyaprathet, allowing for train travel all the way through from Bangkok to Phnom Penh. This will include new border facilities for rail passengers, and the train will surely then be the easiest way to cross this border. However, until then it’s still quite a long way from Aranyaprathet Station to the border necessitating a tuk tuk ride, so for now it’s still best to either use Giant Ibis (see above) or take a bus/minivan from Bangkok’s Chatuchak or Ekkamai bus stations to Aranyaprathet’s Rong Kluea market and cross on foot (if the bus goes to Aranyaprathet’s main bus station you’ll need to take a tuk tuk). Poipet Station’s a short walk from the border on the Cambodian side)

You can now book most of these routes online with 12go.asia, see here

In my case, I’ve entered & exited Cambodia three times. The first time we went through Poipet in both directions, travelling to Cambodia overland from Bangkok and then returning to BKK a week later for our onward flight to Brunei. The second time, travelling solo, I arrived from Saigon and exited to Laos a week or so later. The third time was a visa run from Bangkok, crossing at Poipet, eating lunch in the casino, then heading straight back. In my experience, from Vietnam the border crossing was easy enough, the Laos border was fine but required slipping a cheeky dollar bill to the immigration official, and Poipet is probably the shittiest border crossing I’ve done anywhere (along with the awful Panama-Costa Rica crossing on the Pan-American Highway). 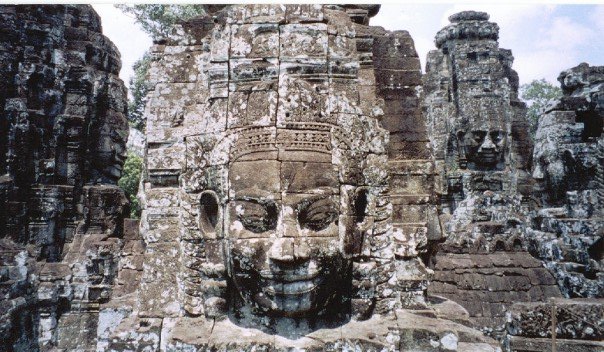 Angkor Wat is the obvious highlight. And though it can’t really be called a highlight, the terrible history on display at the Killing Fields and the S-21 museum shouldn’t be missed. Cambodia’s islands and beaches also look lovely, though I haven’t yet been. Another place I haven’t (quite, due to an international military standoff) been, but have seen, is the controversial cliff-top temple of Preah Vihear.

Another highlight was chilling out with cold beers and new friends on the decks over the waters of Phnom Penh’s Beoung Kak Lake – sadly, this is now only a thing of memory. With the lake now gone, I suspect Phnom Penh will not hold quite the same charm for future travellers as it did for those before the lake was filled.

Visit the controversial Preah Vihear temple on the northern border with Thailand – I once made a failed attempt to do so from the Thai side, but it’s much easier now to do it from the Cambodian side following road improvements (it’s around 4 hours from Siem Reap).

In the cuisine department, Cambodia has some tasty curries, the pressed sugar cane with a squeeze of lime is divine, and if you want to try fried tarantulas, Cambodia is the place!

Search for hotel deals in Cambodia

You can book the main road routes (including to Thailand & Vietnam) online with 12go.asia here

World Nomads offer flexible travel insurance that you can buy even if you’re already overseas (this is a key point, as I once learned the hard way when I got pickpocketed in Bangkok).

The awesome Travelfish site has a good Cambodia section here

(This page contains affiliate links i.e. if you follow the links from this page to Hotels Combined, Amazon, Direct Ferries, or World Nomads and make a purchase, 4corners7seas will receive a commission from them. This commission comes out of their profit margin at no extra cost to you. I’m recommending these products and services from personal experience, and thank you in advance should you choose to purchase them via the above links)