Hello from Taipei, where I recently arrived back after a month in Japan for the Rugby World Cup while running my website Rugby Guide Japan (archived here), and before that a month seeing family back home (though I likely won’t blog that up as it mostly consisted of hospital visits and sadly a funeral). 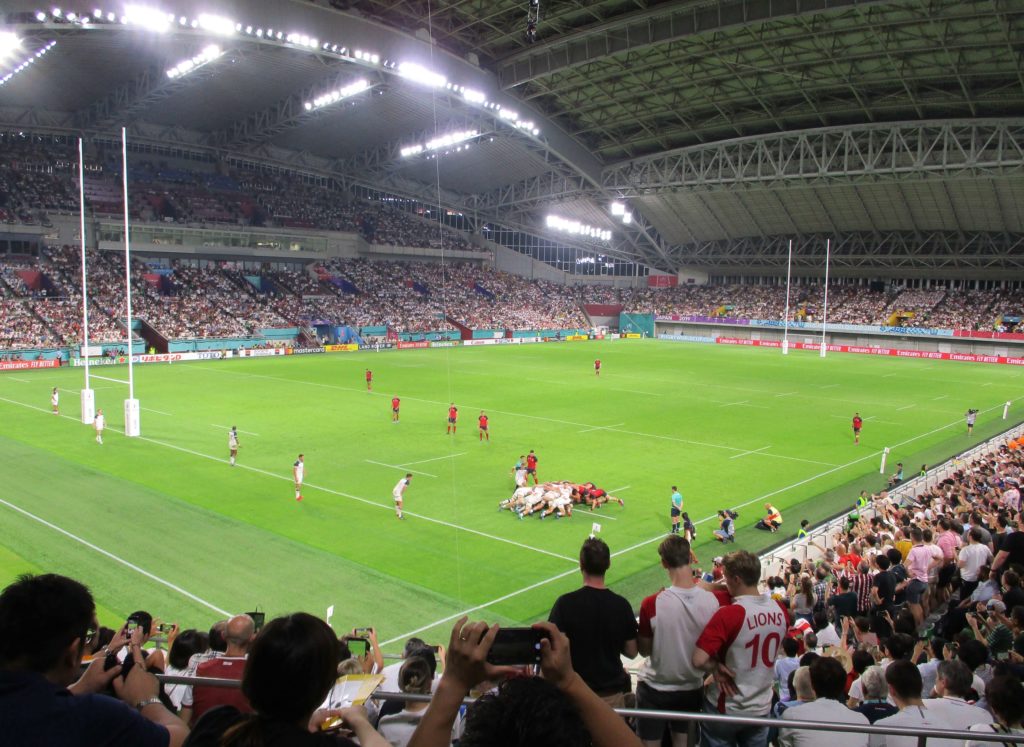 Being in Japan for the rugby was awesome, definitely the best time I’ve spent in Japan that didn’t involve snowboarding. I went there with just a ticket for the Canada-South Africa match in Kobe, not a match I had much interest in but it was the best one I could get when the tickets were released to general online sales (the big ticket matches sold out within minutes). Worked out nicely though as a friend in Osaka managed to line up tickets for the England-USA match (also in Kobe) as well as finding a buyer for my Canada-South Africa ticket. So I jumped on the shinkansen down to Osaka for a few days (from Tokyo, where I’d rented an Airbnb in the western suburbs for the duration of the pool stage).

I used to live in both Osaka & Kyoto, so it’s always good to visit the Kansai region again, catch up with friends in Osaka, and do some hiking or wandering in Kyoto. For the latter, this time I just made do with a quick hike around around Fushimi Inari, and the evenings in Osaka involved plenty of beers and tasty food. That’s what Osaka does! 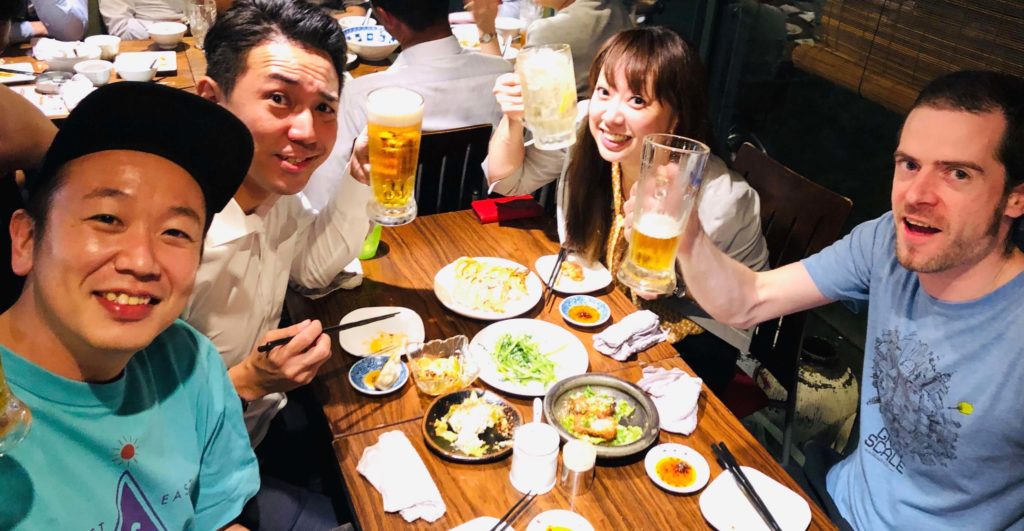 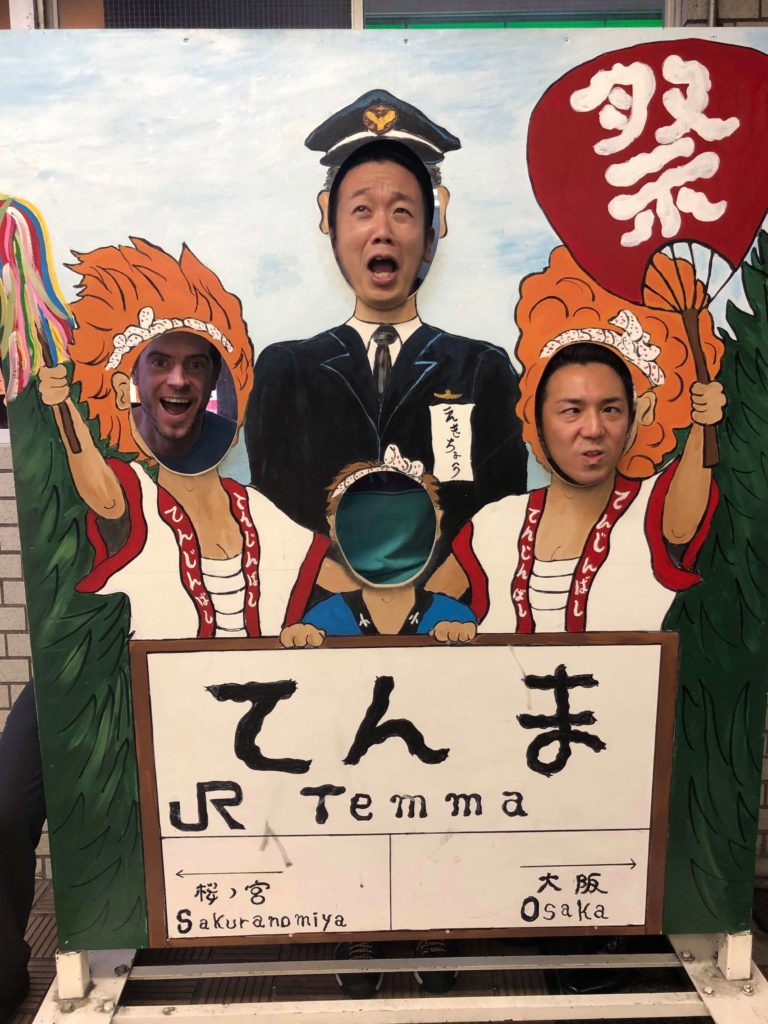 One of those evenings I hopped on the Hanshin line over to Kobe to meet my mate for the match. In a top piece of work he’d managed to sell my existing ticket at face value, which was 5k more than the price for the England ticket, so not only did I get to the England match, I ended up with 5000 yen cash back in hand.

Which was spent entirely on beers from the Heineken girls doing the rounds of the stands: 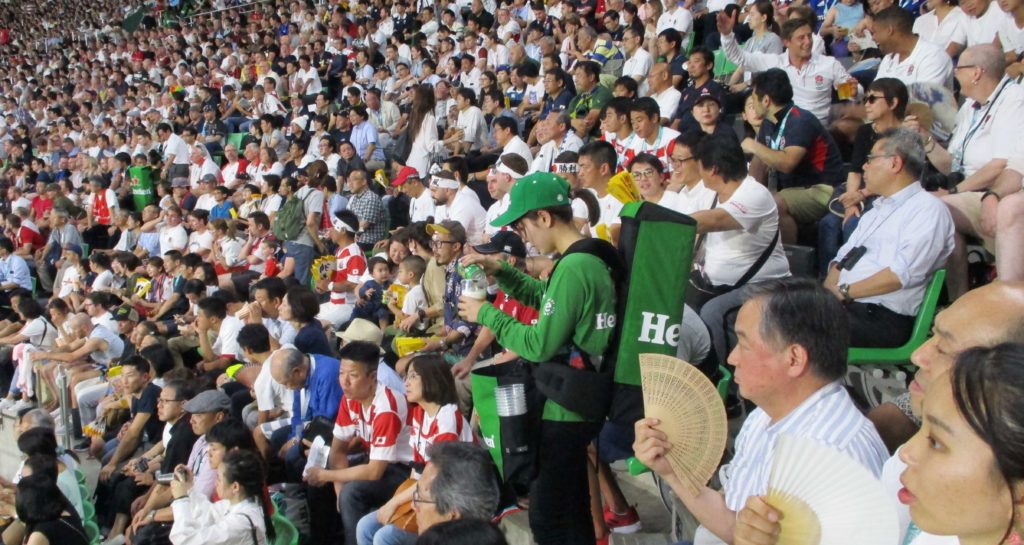 Pretty cool getting beer service direct to your seats like that, though Chris had an early start for work the next day and sounds like he suffered as a result… I just slept it off! 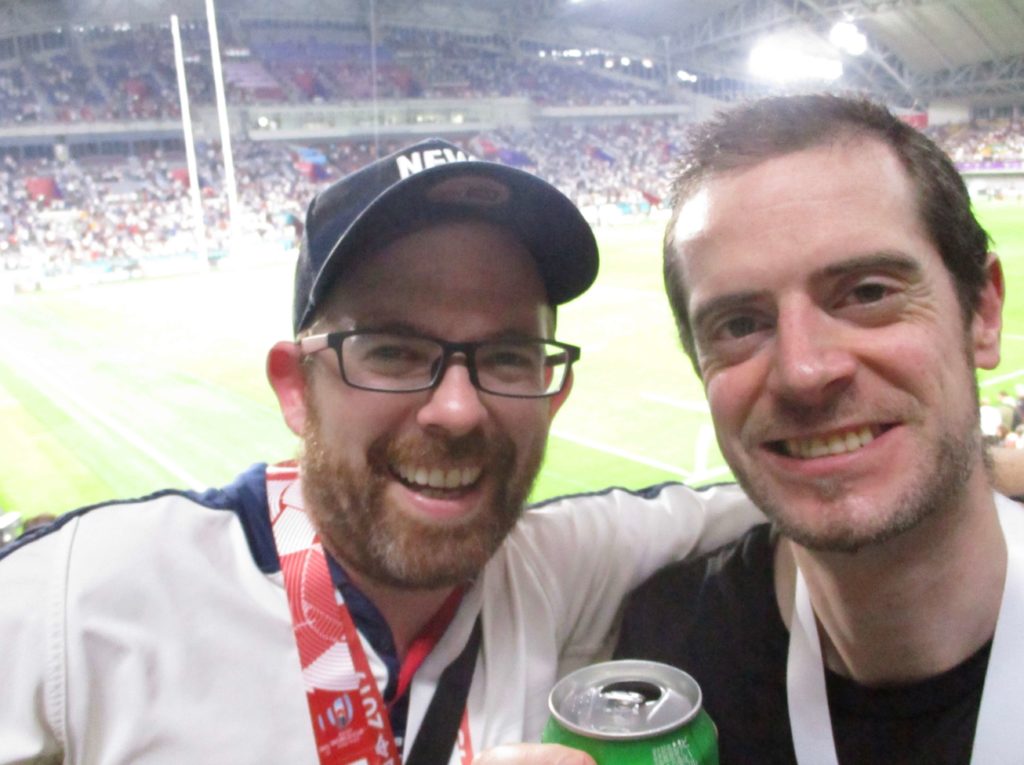 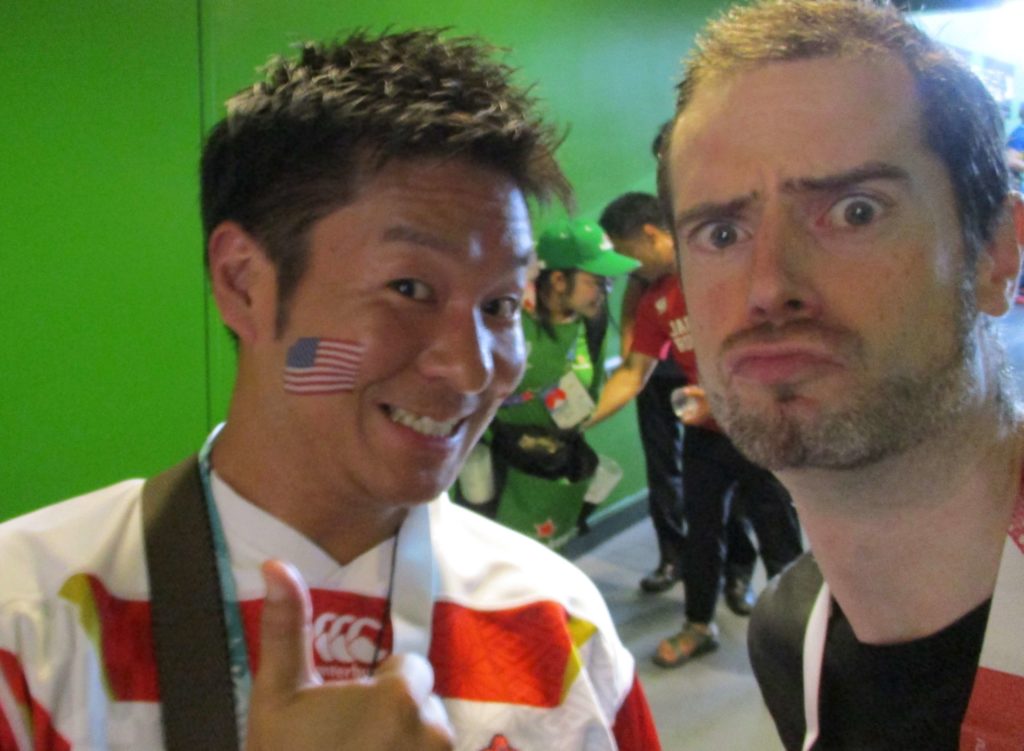 Speaking of beer, I found this monstrosity in the supermarket: 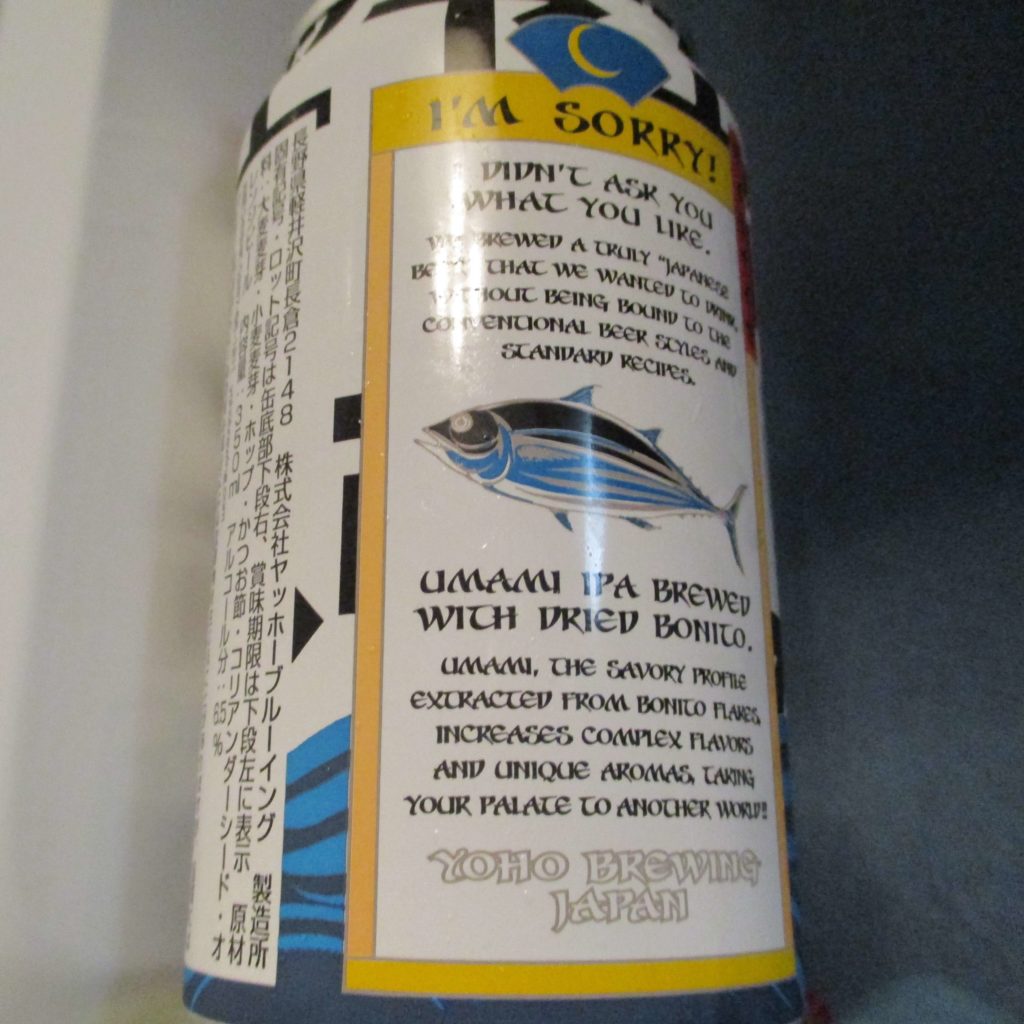 Didn’t really taste of fish, but definitely had a strong umami aftertaste. Interesting at first, but pretty rank by the end of the can.

Anyway, the match itself was a 1-sided affair, finishing 45-7 to England. Obviously there’s a gulf in class between the teams, but it was still awesome to be there and the atmosphere was great – England had plenty of travelling support, but the Japanese fans had taken it upon themselves to learn both national anthems and support both teams, many with face paint or wearing jerseys. Lots of Brave Blossoms jerseys on show too, and in fact a number of Aussie, New Zealand, and other fans wearing their own team jerseys, everyone mingling, chatting and enjoying the game. 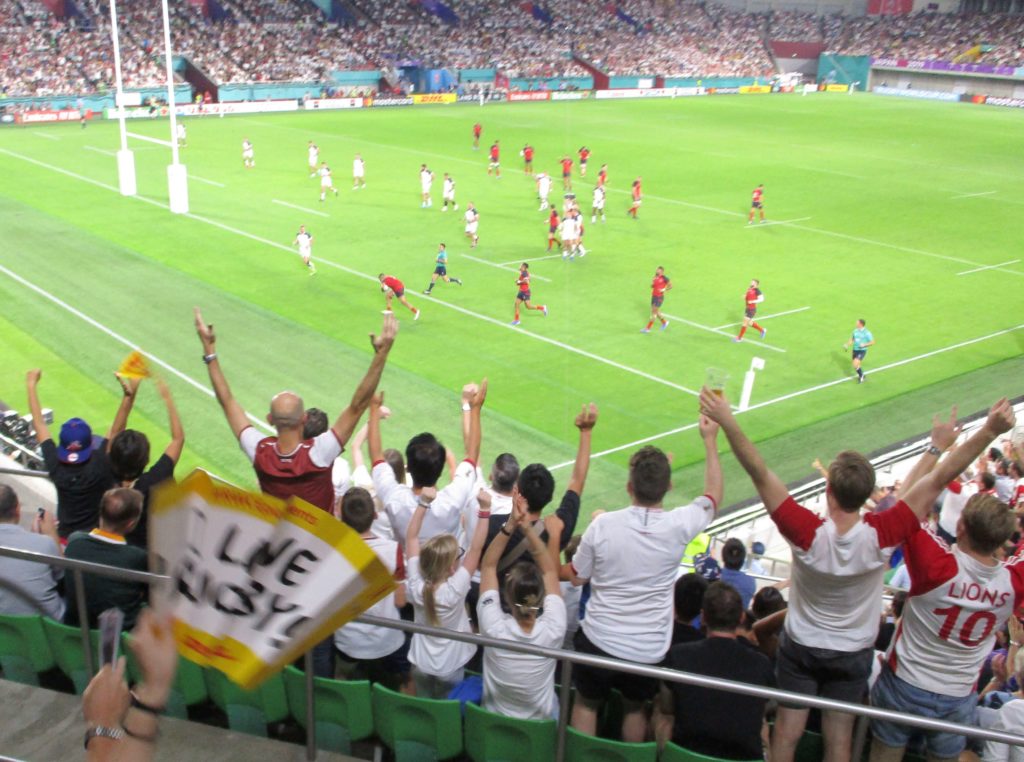 The week before that I’d met up with old friends in Tokyo (a couple of the boys from the Gaijin Gaming Bros crew), to watch the England-Tonga match in the pub. They’re American, but they got into it somewhat and even learned where Tonga is 😉

In between all this rugby watching I went on a couple of food missions, to Tsukiji Market (for the first time despite having spent so much time in Tokyo) and to try the Michelin Star-worthy ramen at Tsuta & Nakiryu.

I narrowly missed scoring tickets for England-Argentina through my mate Jamie (from Tohoku volunteering days) but was too slow, so watched it in the pub with Japanese friends, immediately followed by the Japan-Ireland match. Great scenes in Shibuya when Japan won that one. 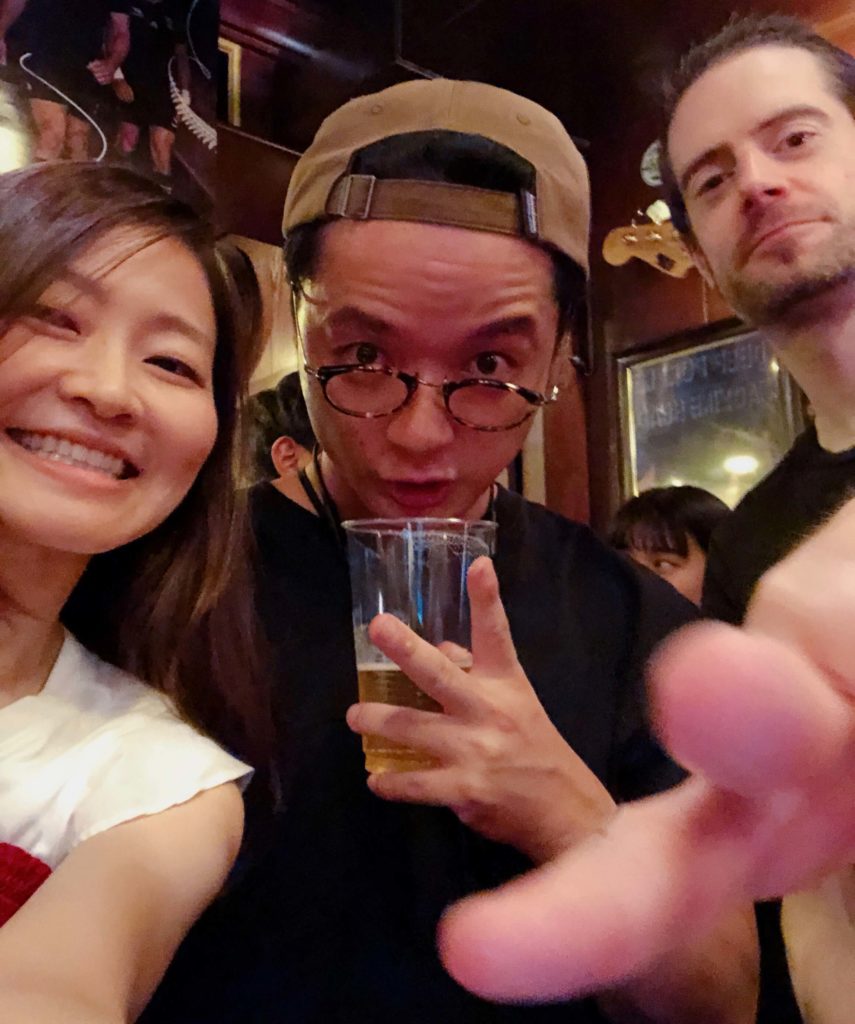 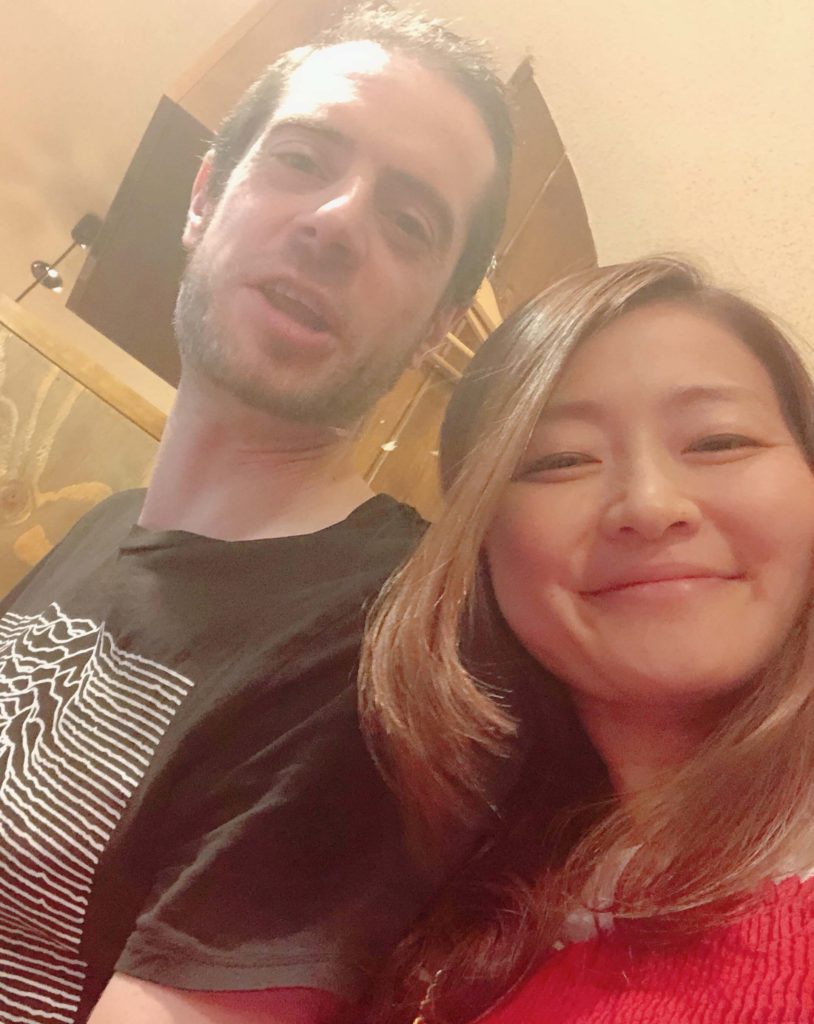 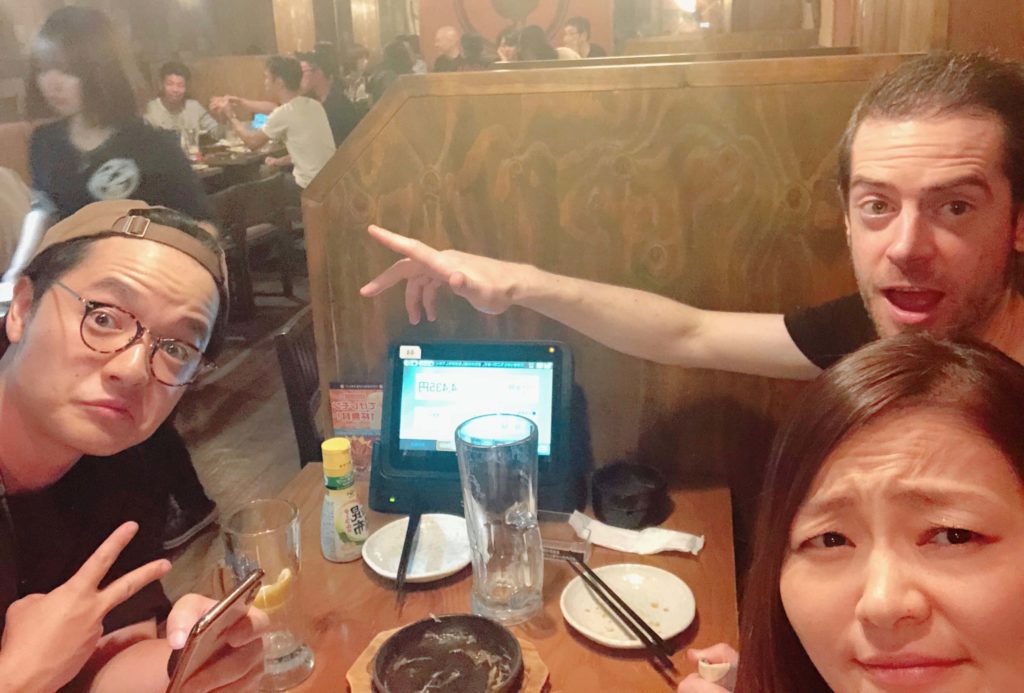 The same mate was lining up tickets for the England-France match in Yokohama and thought he might be able to get me one too, but then typhoon Hagibis rolled in and caused the cancellation of the Italy-NZ, England-France, and Canada-Namibia matches. Worse, it killed some 100 people (95 confirmed, with more missing) and caused damage in excess of 900 billion JPY (including 10 entire bullet trains scrapped after their yard flooded) – a reminder that sport is after all only sport.

Where I was in western Tokyo, it wasn’t so bad – torrential rain for 24 hours, but the wind didn’t get too crazy other than the odd savage gust. I just filled my fridge with food, made sure my electronics were all fully charged, and waited it out. 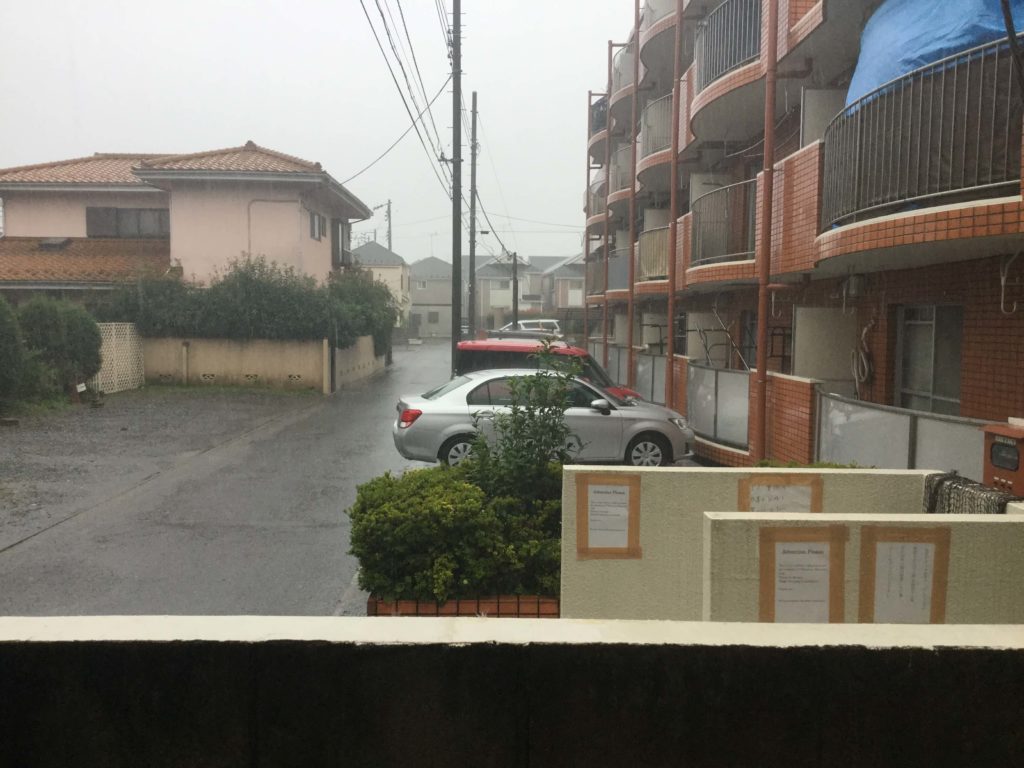 Obviously it was a shame the France game was cancelled, and Italy were pissed off at losing their shot to qualify for the quarterfinals – not that many people gave them much hope of beating the All Blacks. But the greatest shame in terms of the typhoon’s impact on the tournament was the cancellation of the Canada-Namibia match in Kamaishi. A shame for the 2 teams, obviously, losing their chance to compete for a World Cup win after getting thoroughly marmalised by NZ, SA and Italy (an absolutely brutal pool for them both to be drawn in); but a real shame for the town of Kamaishi, a traditional rugby town which suffered massive damage and loss of life in the 2011 tsunami, a town for which hosting two matches of this World Cup meant so much. At least the one match they got was a belter, Uruguay’s shock 30-27 win against Fiji.

Another totally unexpected effect of typhoons Hagibis was that I bumped into an old uni friend outside a noodle joint the night before the typhoon hit. I was helping his friend decipher the menu, and he recognised my voice and turned around. Amazing coincidence really – one of those things that makes you think ‘small world’. And also, you have to wonder, how many times have you randomly passed close to someone you know from long ago, but just missed each other?

Anyway, these guys had flown all the way to Japan for the weekend, just for the France match, only for it to be cancelled. So they were partying all night (Friday) instead, before the storm hit Tokyo on Saturday morning. And so we stood in front of a neon soaked Shinjuku noodle shop and caught up in the vanguard drizzle of the approaching storm. Small world!

I didn’t have any promising leads for tickets for the knockout stages, so that was time to bail & head back to Taiwan, where I watched the final in the pub with my South African mate – he was obviously far the happier when the game was over, but to be fair South Africa were pretty awesome and deserved to win it.